As I write this post, I’m hacking my lungs out and building an impressive tissue mountain. I was supposed to wake up at 8am for a hike, but instead spent the night drowning in mucus and getting zero minutes of sleep. This would’ve SUCKED back when we were working, but since we are now slow travelling, I just let myself sleep until noon, putter around our Airbnb, and watch a ton of Netflix.  Missing out on all the activities doesn’t matter because I can just postpone them for another day. Zero worries. Zero stress. Long-term travel rocks!

AND, on the plus side of having the plague, I’m now holed up in this cozy house on top of the mountains writing up this reader case for all you fine people.

And this killer view doesn’t hurt either: 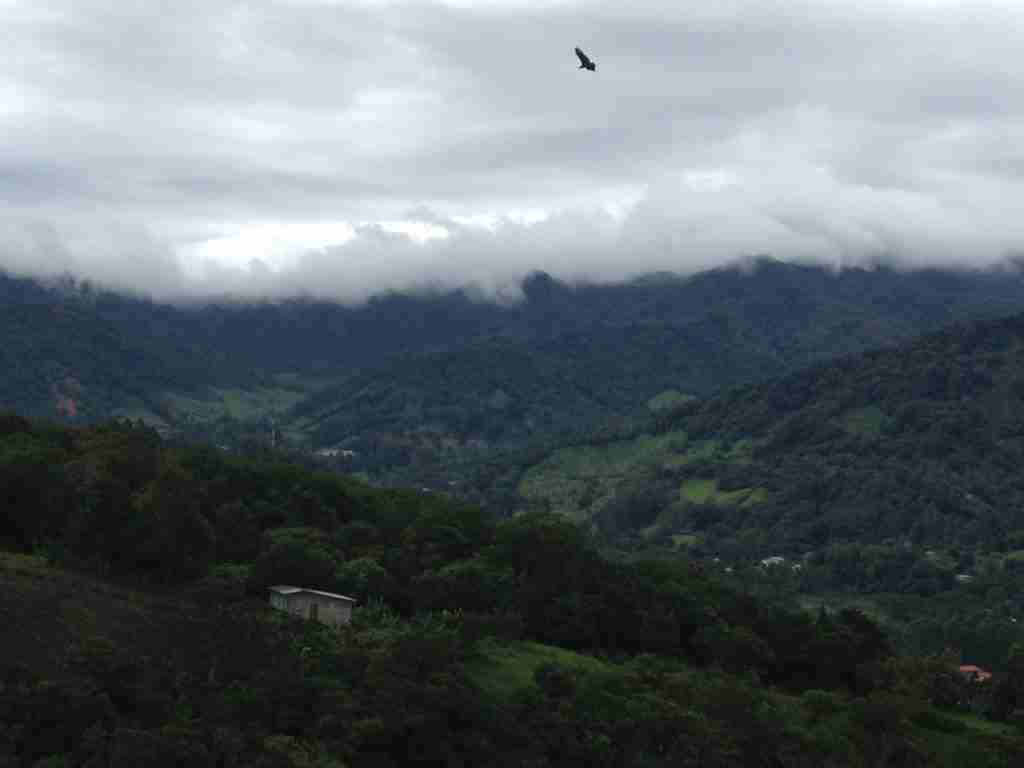 So without further ado, here we go! (email has been edited for brevity)

I’m a 37 year old woman. My nickname is KK! I’m almost 3 years married to an amazing woman, KM. We both left our hometowns in the Midwest after graduating from college, and headed for LA to pursue jobs that our hometowns couldn’t provide. Oh, and to also be openly gay.

KM and I both had a similar upbringing where we had SO much love and emotional support from our parents, and they provided everything we needed from the years of 0-18, but once college hit, we were mostly on our own, taking out sizable student loans, covering room and board, and any fun money. So we graduated college with a decent amount of debt. Couple that with insane high cost of living in LA and low paying jobs, well we then accumulated credit card debt just to survive.

Back in 2002, I was pursuing a career in entertainment, and it’s well known that you have to bend over and take it in order to get a coveted job in the chosen entertainment field much longer than it takes to advance anywhere else in the country, world, planet. So I was making roughly $30,000 – $42,000 from the time I was 22 – 30. Shit was brutal. I nearly gave up. I was always spending more than I made, because I now had crazy minimum payments on credit cards. I had about $27,000 in credit card debt (primarily food, gas, minimal entertainment expenses because I had to wine and dine writers, people in the industry) and $10,000 left in student loan debt.

KM and I been in the same apartment since we moved in in 2017 and have CHEAP rent for Los Angeles. We pay $2000 a month for a 2BR/1BA in a desirable part of town. I realize that the last 5 years of salary could’ve made a HUGE chunk of change if we had invested it, but it was more important for us to pay things off. But now we want your advice. We’re itching to buy a home and expand our family in LA. My job can’t be done in another city, and KM has a SWEET job with tons of flexibility and bosses who want her to get pregnant. We are going nuts in our small apartment, and we both miss hosting people, having dinner parties, and having grass to put our toes in that’s OURS. Houses that we’ve been looking at are anywhere from $595k-$800k for a 3 or 2 BR that we could live in for the next 5+ years.

We love our jobs and love what we do, so there’s not AS much of the urge to retire immediately. We know we’re catching up for lost time with the damage we did in our twenties and early thirties, so realistically we’d love to retire when I’m 50 and KM is 46.5 or 47. Ideally we’d love two kids and would love to help them with some or most of their college.

So, what the hell do you think we should we do? Be brutally honest, we can take it.

Is it just me or does this reader’s life sound exactly like the plot of La La Land? But with less dancing (I’m guessing).

Now I don’t know much about the film industry in LA, but KM ended up going from $30,000 salary to $221,000 (including bonus) in 15 years! Which just goes to prove if you want it bad enough, you don’t have to be an engineer, doctor or lawyer to earn that kind of moolah. Kudos, La La Landers!

Anyhoo…movie references aside, let’s look at their finances:

KK and KM are making an astounding $14,571/month after tax and spending $6636.50, which means they have a savings rate of 55%! Amazing, considering that they had a combined $74,000 in student and credit card debt with a starting salary of $30,000/year. WOW. You ladies have come a LONG way and I’m so impressed with how far you’ve come. And not only do you have a 55% savings rate, you also have $253,556 in assets! Even if you buy a house for $595K right now, you’d been able to pay off just 3-4 years. Given your incredibly high salary and the fact that you like your jobs, a house at that price range wouldn’t be a problem for you at all.

But let’s MATH THIS SHIT UP and see what happens to your retirement goals with and without the house:

Scenario 1: Retiring while continuing to rent

Note: rent increases will be offset by salary increase and promotions, which have been omitted from this chart.

This means you’d be able to reach your $2M portfolio and retire in 10 years! So yes, with this scenario, you will beat your targeted retirement age of 50 by 3 years and retire at age 47.

Scenario 2: Retiring with a house

But since you’ve expressed your desire to buy instead of rent, what will happen if you retire with a house?

At that point, you would need a mortgage of $560,000. Plugging that into the mortgage calculator, we get:

So your total monthly payment would be around $4,009 and this is not including closing costs, lawyer fees, home inspection, real-estate agent fees when you sell, etc, etc.

Of the $4,009 monthly cost, $2852 goes towards interest, property taxes, insurance, and maintenance, NONE of which adds to the value of your home. That’s actually HIGHER than your rent. YIKES!

In 10 years, at the point where your other “renting” self would be retiring you will have paid 10 years into principal, but guess what? You would STILL have a monthly interest payment of $1251/month. Property taxes, maintenance, insurance, none of that goes away no matter how much of the principal you pay off, so that still adds $1145, which gives you $2396 that you are throwing away in year 10. Because your interest has gone down, your tax savings are also reduced to $480/month at this point, so you are STILL throwing away $1916/month after paying the mortgage for 10 whole years!

Now, let’s see what that does to your retirement date.

Taking into account the extra 7 months she would need to save the 20% down payment, her retirement date would be around 14 years instead of 10.

So by buying a 700K house, she pushes back her retirement date by 4 years. She will only be slightly off target and retire at 51.

So are we *gasp* saying that buying a $700k house ISN’T a bone headed idea? For this couple, yes we are. And it’s not because of home appreciation, or the mortgage interest deduction, or leverage mumble something leverage, it’s because they’re making over $300k gross a year. Their house price is just 2.5X their pre-tax salary. So it’s difficult to really blow yourself up too badly with numbers like that.

But is the house worth an extra 4 years of working? Unfortunately, that’s where the power of mathing shit up ends. This La La Land couple will have to answer that question for themselves.

Intrepid readers, what would you do? Sound off in the comments below.

Update: Astute readers have mentioned that this analysis doesn’t take into account kids and college costs. That is correct. Since the costs of kids would be the same regardless of whether they buy or rent, this has been left out. KM and KK can feel free to add these costs and rerun the scenario themselves to see how much it would push out their retirement date.