Dating inside the FIRE community has long been a problem we didn’t know how to solve. Traditional dating apps like Tinder weren’t a great fit, since they didn’t allow people to filter based on being part of the FIRE community. Plus the definition of who was or wasn’t part of the “FIRE community” was itself debatable. Was the solution to hold mixers as part of existing FIRE meetups? Did we want to piggyback off of existing communities like the Mustachians or the ChooseFI Facebook groups? Or did we want to create a new community entirely?

All this was part of a debate we had with Mr. Money Mustache way back when we met at one of the Chautauquas. All three of us being (former) computer engineers, an App seemed like the most logical solution. We even came up with a name: Mustache Rides. Heh.

But then at that Chautauqua is when we got a mysterious email from an editor at Penguin Random House asking us whether we’d be interested in writing a book, which then of course consumed our lives for the next 2 years. The dating app got shelved along with every other idea that wasn’t related to the book. We never got around to working on it again, so I figured the idea was basically dead.

So imagine my shock when my friend, Clover, told me about this FIRE dating app! It’s called firedating.me, and it’s available to use now!

The creativity and capabilities of the FIRE community never cease to amaze me, and this is just the latest example. It was created by a FIRE enthusiast named Viktor who lives in Munich, and…that’s pretty much all we know about him. I might reach out to him later and interview him, but in the meantime I was just so curious and excited by this I just had to take the app out for a spin!

First of all, I say app, but in reality it’s a mobile-friendly website, so you access it through your browser either on your desktop or your phone. For the purposes of this article, I’m going to use it on my laptop so I can take screenshots easier.

First we start by scrolling down and clicking “Sign up.” It asks us for an email to create an account, so I’m going to use my [email protected] account. 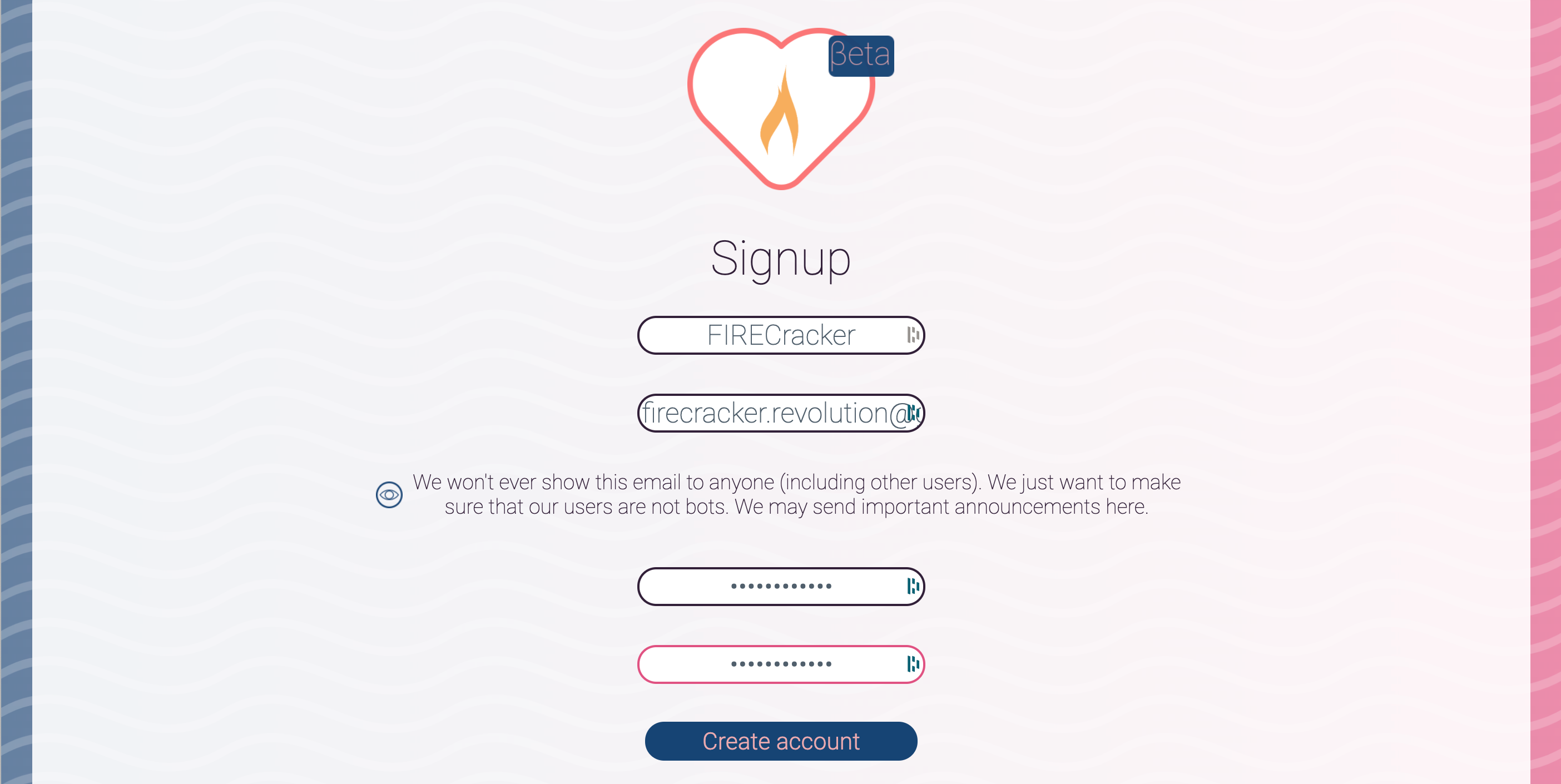 It sends a validation email, which arrives in my inbox a few minutes later. Simple enough.

OK now the fun part: Filling out my profile. Let’s see how they differentiate from more traditional dating apps like Tinder.

It asks me for my gender. Standard enough. Though there are no options for non-binary choices, Viktor says he’s seeking input on how best to add that.

Next, what gender am I looking for? Just for testing purposes, I’m going to pick both. For science. Yeah…

You also then fill in if you’re looking for a romantic or a platonic relationship, and whether to restrict matches to your geographical location.

Next, it takes you to your profile section. This part’s actually pretty extensive, so let’s see how the app classifies FIRE people versus a normal dating app.

The first section is basic bio information. Interestingly, by default your profile picture is blurred when viewed by other people. Only when they request your info and you approve does it show them your picture, so it’s kind of like an anti-superficial model. It also asks for your age, height, and your current relationship status, which I put as “Married,” but could also be other interesting options like Open or Poly.

Around here is where I thought to myself that maybe I should tell Wanderer that I’m doing this, but then decided against it because a) It’ll be funnier later on when he finds out and b) I don’t need another reason.

The next section is “FIRE Number,” which perked me right up. Right off the bat, it asks you your progress towards FIRE as a percentage (I put 100%), your planned post-FIRE withdrawal rate (which I found hilarious), and a strange field called “Frugality score,” in which you put a fractional number between 0 and 1 indicating subjectively how frugal you are, 0 being entirely not frugal, and 1 being, well, me. So I put 1.

Already I’m liking this thing. What dating app asks you for your SWR? I guess that’s how we make sure only FIRE people use this thing. Anyone else tries to sign up for this and it asks them for your SWR, they’re going to run screaming for the hills.

The next few sections are all open-form questions in which you can type whatever you want into the field. First up are the questions “Why do you look for your partner?” and “What is your stance on children?” 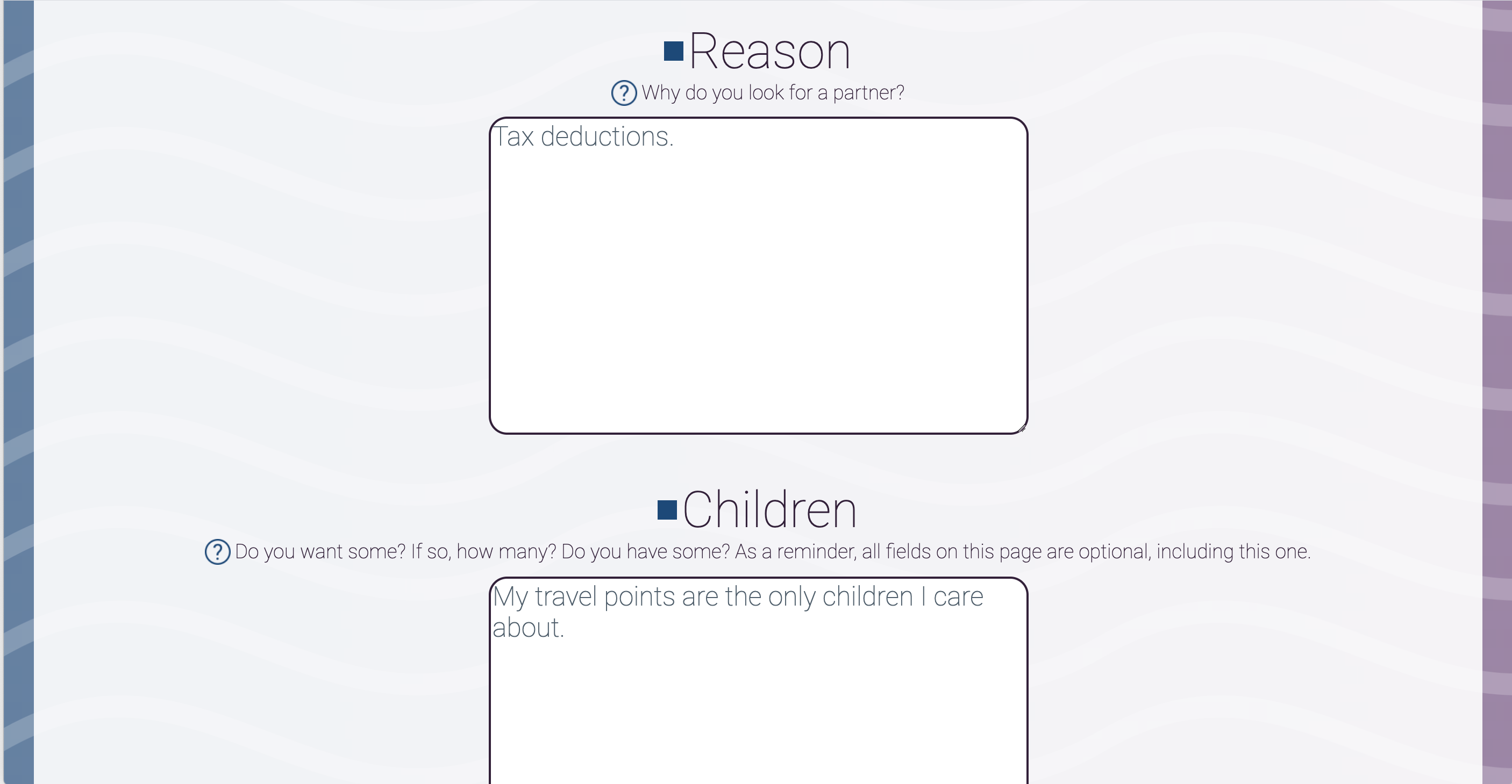 Next are questions about religion, and how we discovered FIRE. 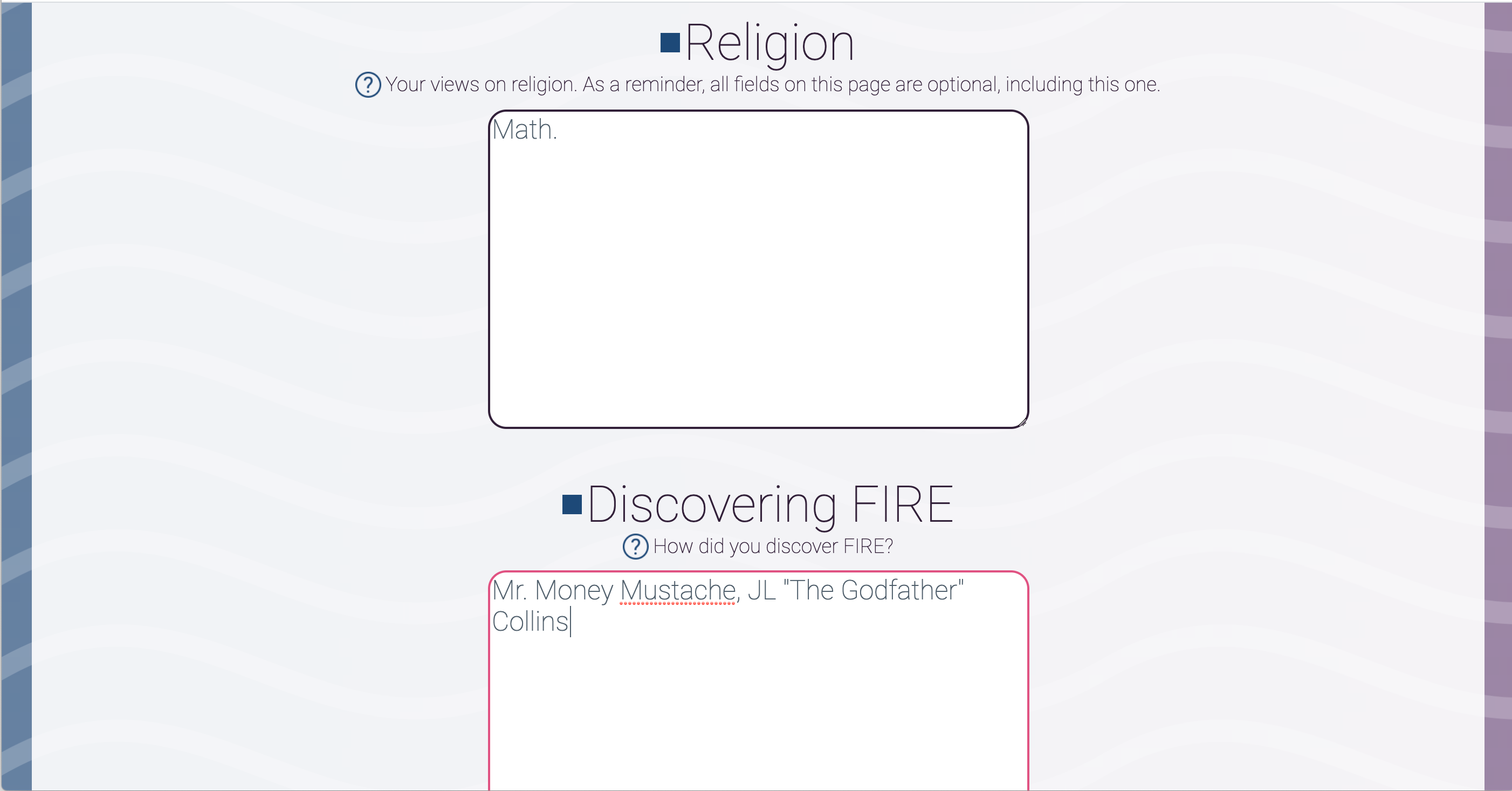 Next is “Describe your Ideal Day after FIRE,” as well as our hobbies.

I’m really liking these questions. Next is an interesting one: “What would you pay for despite FIRE?” meaning what luxury would you refuse to cut on your journey towards FIRE. That’s quite a FIRE-specific question, and it tells you a lot about a person’s values, so I’m all for it. Also, it asks you about your asset allocation, which again, is hilarious. 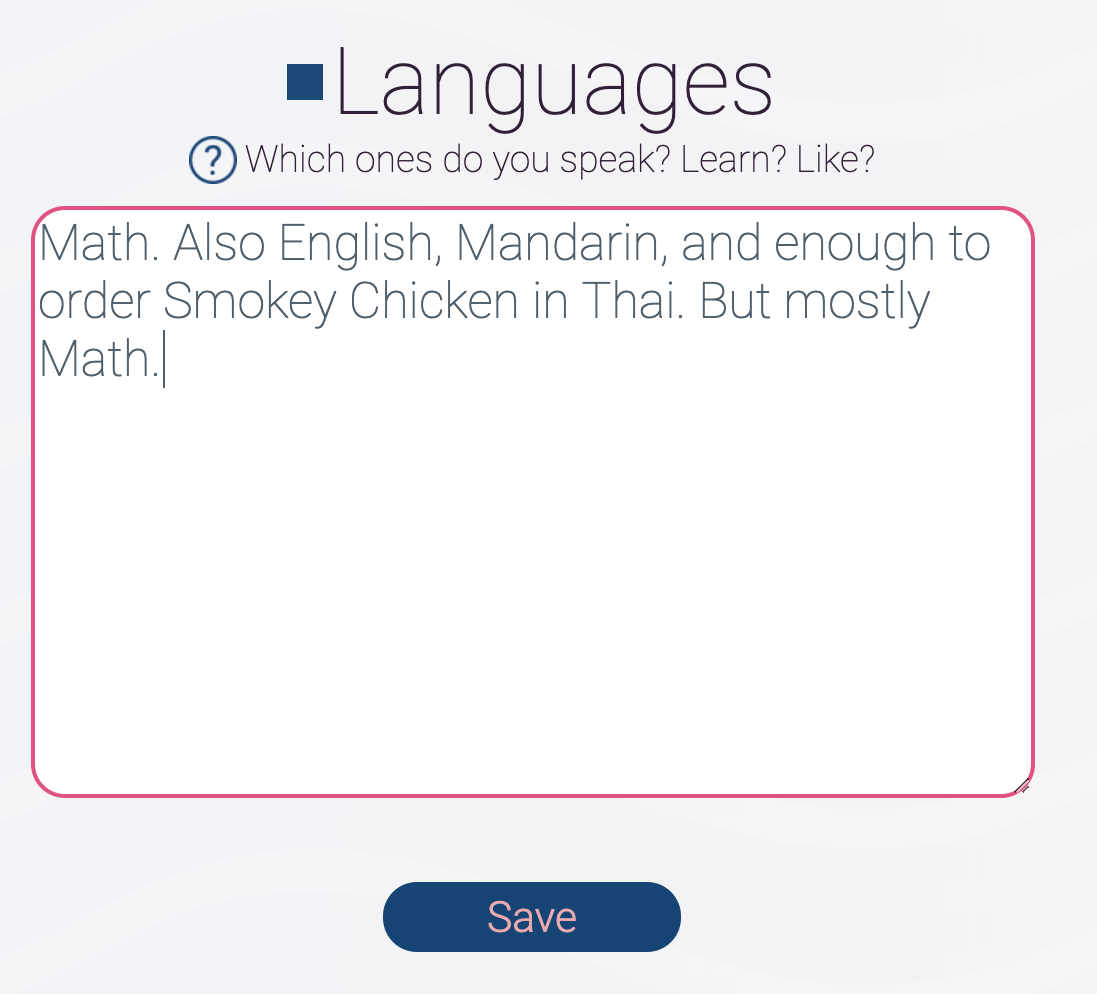 And we’re done with this section! The final section asks for your age preferences to filter your matches.

The default values for minimum age is 0, and the maximum is 127. The normal part of my brain looks at that and goes “ew.” But the engineer part of my brain goes “looks like someone used an 8-bit signed integer for that field!”

And with that, it takes us to the main dashboard. 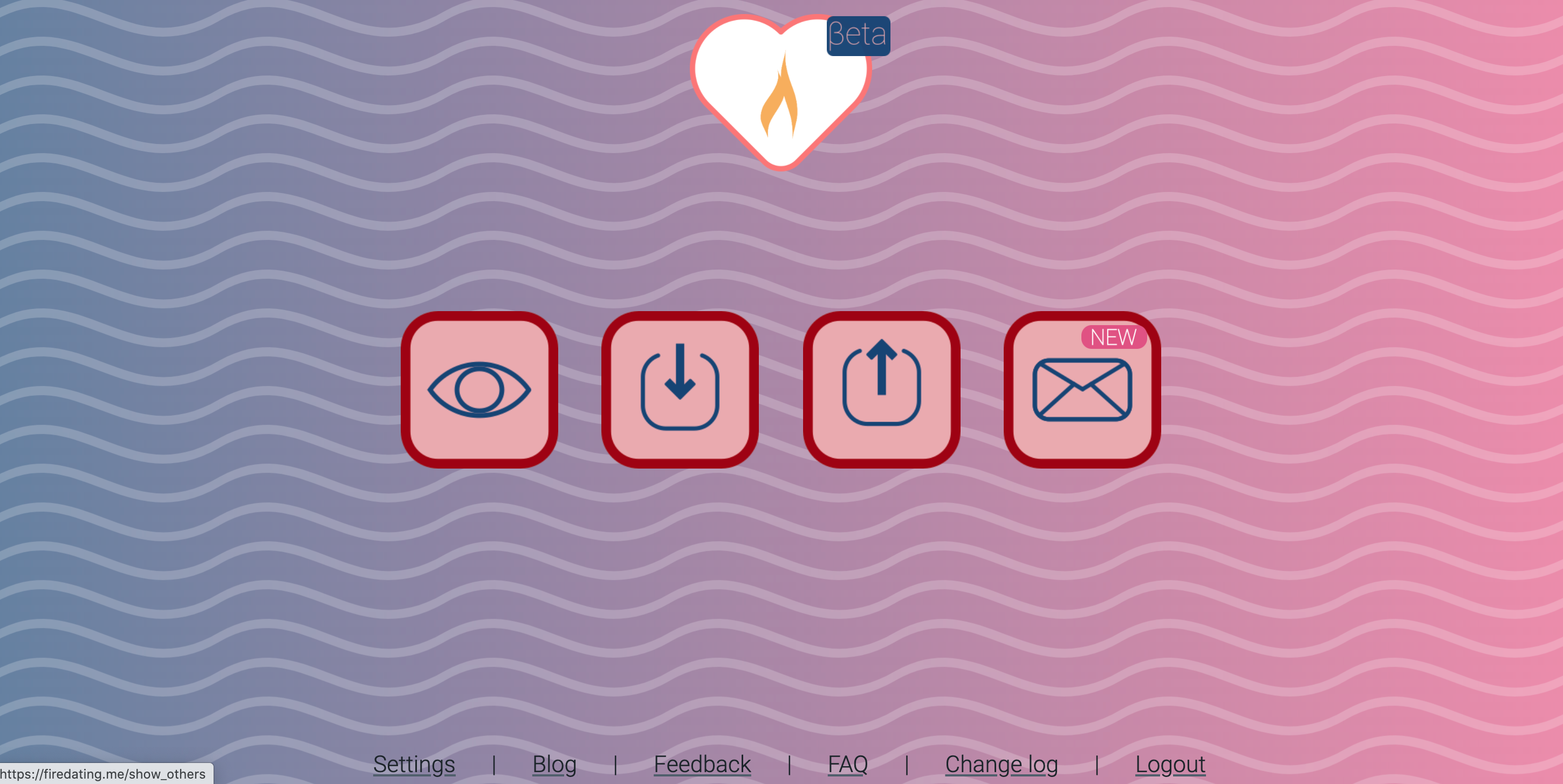 The leftmost button lets us start looking at profiles, the next two allow us to manage requests, and the last one is for private messages.

I suspected that given the free-form nature of many of the fields we filled out, that this app wasn’t going to do a fancy algorithmic matching system, and it doesn’t. By clicking the “Show profiles” button, it takes us to a list of profiles that meet our very simple criteria, and the rest of their profile is available to us to read (but not their picture). 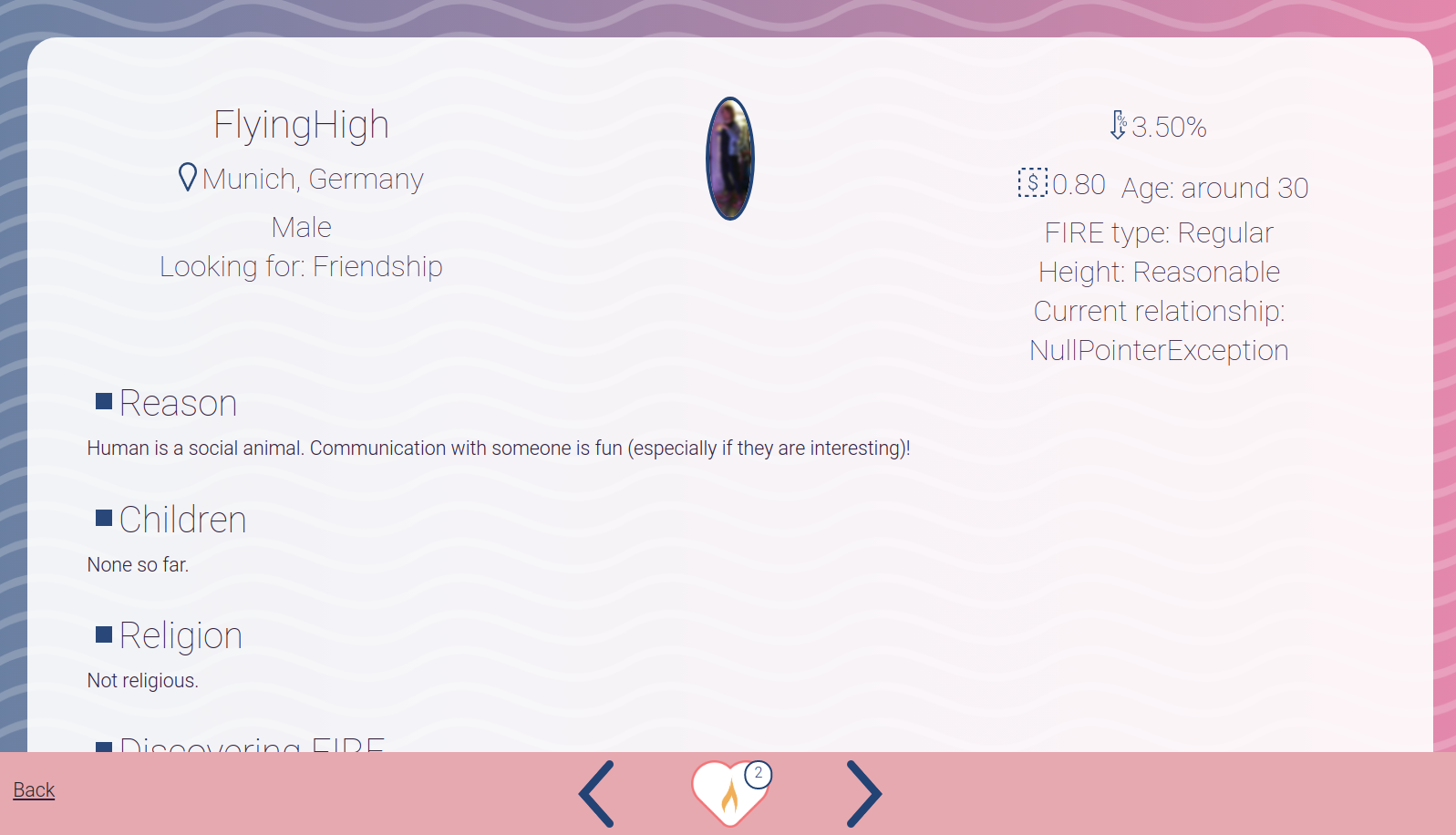 The rest of the interface is fairly standard, but the really interesting bit about this app is the FIRE-specific info it collects. At a glance, you can see how far they are in their FIRE journey, how frugal they are, and a whole lot of other conversation starters that reveal a bit of their personality. You can then request to contact them, which is the Tinder-equivalent of swiping right. Or is it swiping left? I don’t know, I’ve never used Tinder.

The app limits you to seeing at most 10 profiles per day, and sending 2 requests per day. The reasoning behind this is spelled out in the FAQ.

Why do you limit number of requests and profiles per day?
Yes, one can send at most 2 requests and see at most 10 new profiles per day. Unknown is often mistakenly perceived better than something one already has. Thus, I want to incentivize people to develop contacts they already started instead of eternally searching for the magic perfection. I’m open to your suggestions.

It’s an interesting philosophical choice. It seems that the creator is deliberately trying to avoid some of the pitfalls of Tinder, which as you know is often criticized for being too superficial and not encouraging people to form real relationships, so I applaud him for that.

How does it make money?

Which brings me to another interesting decision this app makes: It’s entirely non-profit. There is no cost to sign up, there are no ads, and the creator is not attempting to monetize at all. His only incentive, according to the FAQ, is that hopefully people will invite him to their wedding if they meet on his app.

I have some mixed feelings on this. While on the surface it seems great and selfless that someone would make something like this for free, in practice it does make me wonder about whether this will be around for long. I’ve used free WordPress plug-ins before and invariably what happens is that the developer gets sick of the less-than-fun aspects of maintaining an app and the increasing costs, and eventually abandon it. And once the creator stops developing updates and fixes and you’re just stuck with a buggy app.

Monetizing isn’t necessarily a bad thing, and helps you do things like pay for hosting/server costs and, potentially, hiring people down the line to help you as your user base gets bigger, and these things ultimately help ensure that the project stays around and keeps being maintained.

So while I applaud Viktor for building this entirely for free, as time goes on and if this takes off, I hope he will consider at least some kind of monetization strategy. Worst case scenario, he could always sell vibrators!

So without further ado, I’d invite everyone reading this to try it out! Here’s the link again: https://firedating.me/

This is not an affiliate link, I make nothing off of you signing up, I’m just genuinely curious if the FIRE community will use this and find this helpful, because FIRE dating is a problem I was never able to solve myself.

Update: Gah! Someone just requested to be matched with me while I was writing this! I should probably tell Wanderer what I just signed us up for soon…