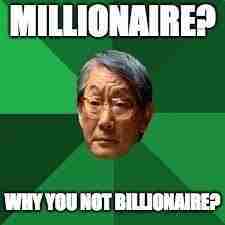 When I told my Mom I was a millionaire, her response was “So what? You don’t even have a house.”

To most people, becoming a millionaire is a pipe dream. Especially if you had my kind of childhood—the kind where a can of coke was the most precious thing in the world.

But when I announced to my parents we’d achieved said pipe dream and are retiring to travelling the world for a year, it didn’t go over well.

This surprised me, given that him and I are engineers. Engineers don’t rely on feelings. We Math Shit Up. So when Wanderer offered to show him the math to prove that $1 million was enough and Dad simply brushed him off, I was speechless.

Dad followed up his dismissal with a harsh: “You need to go back to work.”

In hindsight, looking back, I shouldn’t have been surprised. In Chinese culture, age is wisdom. It’s inconceivable that a younger person would know more than their elders. Younger people have less wisdom so what you say should not be taken seriously—regardless of whether it’s backed up with math or facts. Western kids might get to have open discussions and debates with their parents, but as a Chinese kid, forget it.

As an adult, I never cry (except when there’s a REALLY good deal to be had), but that day I bolted from my parents’ house with tears streaming down my face.

After that, my parents and I hardly talked for a whole year. I would write them from Europe periodically, telling them I was still alive, but that was the extent of our contact. Every now and then I would get a panic e-mail from my Dad, telling me to get a job.

I ignored him. After a decade of struggle, I was finally living the life of my dreams and I didn’t need anyone’s permission to love my life. Not even my Dad.

“How’s the book writing going?” My Dad asked when I called him a few weeks ago from Germany to wish him happy Father’s Day.

“Um. Good,” I said. “It’s about 80% done.” I took a deep breath. Here we go. He’s going to tell me how happy he is that I’ll be done soon so I can get back to more important things—like settling down and having kids like a normal, non-insane person.

I blinked. Wait. What? My hands were shaking so hard I almost dropped the phone.

My eyes felt wet and my vision went blurry all of a sudden. Shut up. I wasn’t crying, you’re crying. There was something in my eye.

So apparently, he’s been reading this blog every day for the past year. Specifically, this article where we reported having even more money than when we retired. And friends/family have been asking him non-stop, seeing my face in the news, calling him and asking “is that your daughter?”

Here’s the thing about Chinese parents. They will sacrifice everything for you. They will wear the same threadbare clothes for the past 20 years and ride a rusty old bike to work so they could take every penny saved to give you a better education. They will toil through hours and hours of frustration and boredom to help you get ahead, never taking even a second to think about their own happiness.

But they will NEVER EVER tell you they love you. Forget about hugs and kisses. And telling your kids “Good job!” or “I’m proud of you?” HA! Positive reinforcement?!? That just makes kids weak and homeless!

Or at least, that’s what I thought. Turns out, all it takes is to become a millionaire, break a national record, become an international news story, and get a book deal with the biggest publisher in the world. So, you know, it is possible!

Dad then went on to say that he now believed that what we’re doing will help “many other young people,” and that many of his friends are asking when they can buy our book for their kids.

He’s even following our investment workshop and investing in low-cost index ETFs! Instead of losing money to shitty mutual funds like he did in the past, his new portfolio has gained 8% in the past year!

Three years ago, I thought accomplishing my childhood dream of becoming a novelist and signing books in New York was the best moment of my life.

Ever since retiring, we’ve gotten reader e-mails talking about being judged by friends and lack of support from family on their path to financial independence. They have the fear that once they quit, their family and friends won’t approve.

I get it. I’ve been in your shoes. We’ve experienced vitriol in many forms—from the thousands of haters on CBC, Yahoo Finance, The UK Independent, etc. to racist e-mails, commenters bashing us for our “horrible life choices,” to even losing friends in real life.

But now, 3 years later, we’re richer, healthier, and still living the dream. Our confidence has grown and we no longer need to justify ourselves to anyone.

As a result, this confidence has unexpectedly converted that vitriol into curiosity. Friends and family no longer argue with us in a desperate attempt to validate their life choices. Instead, they ask us questions about finance, investing, and our experience living the nomadic life.

But all of that pales in comparison with our latest accomplishment—to appease the most difficult person to appease of all—the Asian parent.

To do that, we couldn’t convince him ourselves. We had to let our results do the talking.

So if you’re afraid of pursuing FI because of judgement or lack of support from family or friends, you have 3 Options:

If you prioritize your relationships over everything else in life, you might be tempted to go with this option. By giving in, you give up your dreams but help make someone else feel better by validating their life choices. This might earn you praise in the form of “I’m so glad you see things my way!” and “Isn’t it better to follow the herd? Safety in numbers right?”

But this option, while easier at first as the path of least resistance, has the greatest consequences in the long run.

According to Bronnie Ware, a palliative nurse who wrote the book “The Top Five Regrets of the Dying”, the number one regret she heard from her dying patients in the last 12 weeks of their lives is:

“I wish I’d had the courage to live a life true to myself, not the life others expected of me.”

Living an unfulfilling life because you were afraid of what others think of you is something you will have to face on your deathbed.

So if you take this route, you have to honestly ask yourself: Will you be okay with that?

Your logical brain will tell you that presenting your points clearly will help friends and family understand the unconventional life you’ve chosen. They’ll get to see your point of view and stop feeling so defensive. If you break down the math and use logic, they’ll HAVE to see that you’re simply making choices that work for you and that in no way invalidates their choices. That should work, right?

As much as we would like to believe we could convince people with facts and logic, at the end of the day, people who aren’t confident or happy lash out because of EMOTIONS. No amount of logic will appease emotion.

So you can try to reason with them and convince them with your pretty graphs and charts, but if you run into a cultural issue like I did with my parents, it won’t matter. Even if they’re supposed to be a logical engineer—like my Dad.

Let Your Results Do the Talking

Since option 1 and 2 were out for us, the only one that worked as simply living the FIRE life and letting our results do the talking.

We didn’t need to convince my Dad that our index investing + yield shield + cash cushion + geographic arbitrage strategy works because we a) survived the 2015 oil crash b) have a bigger portfolio than when we retired and c) have a negative inflation rate due to travelling the world.

Even though we haven’t worked in the past 3 years, our portfolio MADE money and continues to pay us dividends.

My Dad was afraid that I would stop contributing to society once we quit our jobs, but since then our blog has grown to 3.5 Million views in just 2 years, and we frequently get e-mails from readers telling us how we inspired them to increase their savings rate, learn how to invest, decrease the stress in their lives, and discover all sorts of amazing places all around the world. Our track record from Reader Cases proves this.

When it comes to facing haters on your way to Financial Independence, don’t worry. The more confident you become, the less the haters matter. In fact, you even end up converting them from haters to supporters when they see your results, stop being defensive and become curious instead.

And as for the lack of support from family and friends, don’t try to convince them with data and facts. Let your results do the talking.

Trust me. It works.

What do you think? Have you gotten any flack from family or friends on your FI journey?