Having been to Warsaw, Krakow, Zakopane, and Poznan , I was sure Poland wouldn’t have any more surprises for us.

After the enchanting old town of Warsaw, the chandeliered salt mines in Krakow, the sparkling glacial lakes of Zakopane, and the cheeky head-butting goats in Poznan, could we really be blown away by Gdansk? Isn’t it just a touristy seaside town with narrow buildings and a canal that looks suspiciously like Copenhagen? Since we had already been to Copenhagen, Gdansk had big shoes to fill. So needless to say, I set my expectations low.

Little did I know, Gdansk turned out to be our favourite city in Poland.

Lots of cities in Europe are loaded with history, and I confess that after visiting so many places and going on so many walking tours, I was starting to tune some of it out.

Then I realized that Gdansk is city where WWII started and where Communism ended.

I knew that the WWII started with the invasion of Poland, but I didn’t realize that Gdansk, then known by the German name as “Danzig,” was where it all began. Danzig was a contested piece of land that the Germans claimed was theirs despite it being a semi-autonomous city-state. And Hitler, being the totally reasonable and nuanced diplomat that he was, decided that if Danzig wasn’t going to voluntarily join Germany, he was going to take it by force.

So, on Sept 1, 1939, Nazi Germany attacked the Polish post office in Gdansk. This was the first shot fired in World War 2, officially sparking off the deadliest conflict in human history.

But aside from that, I want to tell you about the best museum I’ve ever visited.

I know what you’re thinking. A museum? You’ve seen one you’ve seen them all, right? Nope.
Let me introduce you to a little something called the Solidarity Museum.

Most museums have sections dedicated to a specific period. Artifacts throughout that period are explained to you on a plaque or a screen. When you look at artifacts, your brain never really connects the pieces together, so it feels like a disparate bunch of historical objects related by a time period or a theme.

The Solidarity museum is different. It doesn’t bombard you with artifacts. Instead, it tells a story of one man: Lech Walesa:

The story starts at the Gdansk shipyard with a worker’s strike. After the dismissal of a female crane operator right before her retirement, the workers erupted in anger. They’d already been disillusioned over increasing prices and falling salaries, and this was the final straw that broke the camel’s back. The workers put down their tools and started to strike.

Lech Walesa, an electrician with a bushy mustache who’d been fired 4 years ago for anti-government activities scaled the Shipyard wall to unite the ship workers. He steered them away from the idea of demanding mere salary increases to creating independent trade unions.

Once Lech took control, leaders representing workers from over 150 industrial plants met to write up 21 demands on a piece of wood, shown here: 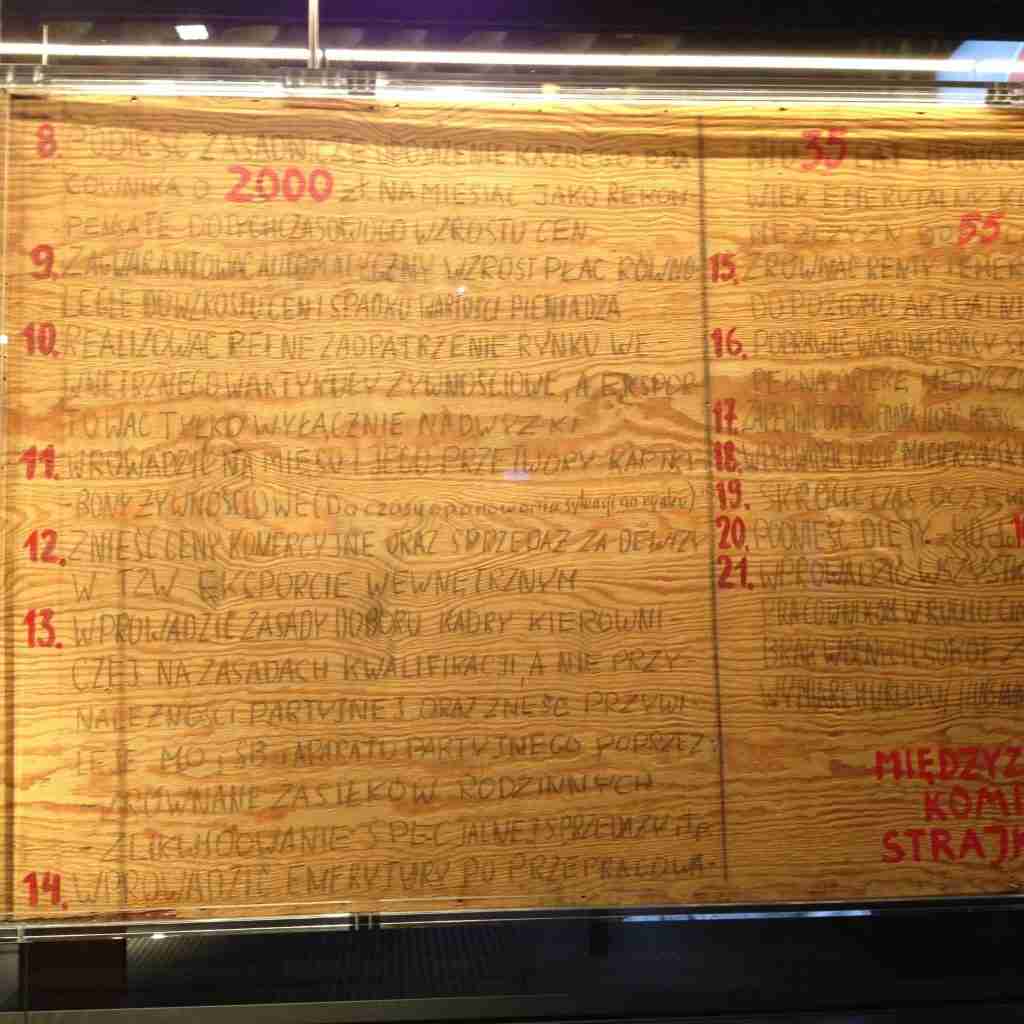 In typical totalitarian fashion, the government immediately stationed tanks and soldiers outside the shipyard. But despite all that, Lech somehow managed to negotiate with government representatives and convinced them to meet all 21 demands, securing the first peaceful victory against communism.

And in typical communist fashion, they promptly declared Martial law, massacred a whole bunch of people, and threw Lech in prison.

What then happened was an improbable, David-and-Goliath uphill fight where the Polish people rallied around this imprisoned trade leader, forming a massive movement called “Solidarity” or “Solidarnosc” in Polish that encompassed nearly the entire Polish economy.

With the help of international support coming from as far away as Scotland and Canada as well as the support of the Catholic Pope John Paul II (who was Polish), the Solidarnosc movement morphed into a political party that took on the Communist Party in Poland, and–get this–actually won.

Somehow strong-arming the Communists into allowing a democratic election, Solidarnosc won almost every single seat, abolishing communism from Poland and electing Lech as Poland’s first non-communist president since the start of the Cold War.

I’m simplifying the story quite a bit here, of course, but the museum was awesome in telling it, because it guided you through the entire history of how this movement started, how it spread, and its eventual impact on not just Polish history, but the world as well. And by telling the story not just via rooms full of artifacts, but as a single narrative centered around this one guy who had a front-row seat to it all, it turned a museum into an interactive story.

And at the end of it, there are two exhibits that really stuck with me. The first is this map that lights up sequentially showing you how the iron curtain fell country by country, as protests inspired by what happened in Poland sprung up to topple communism all over Eastern Europe.

And finally, an art piece assembled by red and white name tags left by visitors to form a heartbeat morphing into the word “Solidarnosc” –the Polish word for the Solidarity movement. 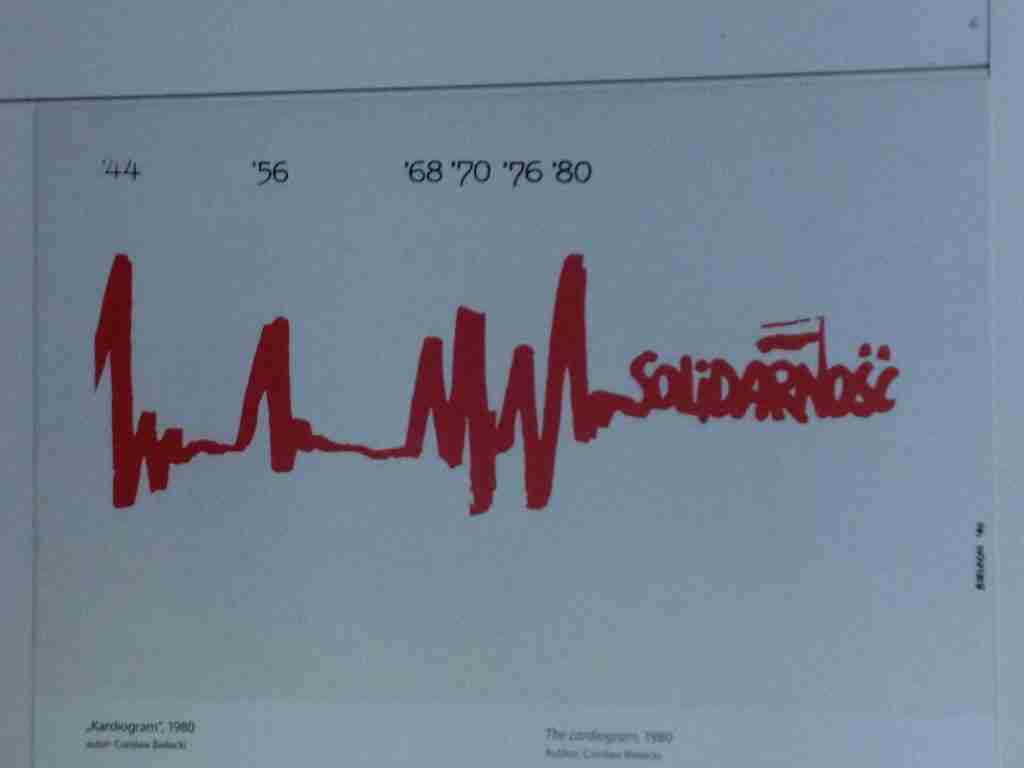 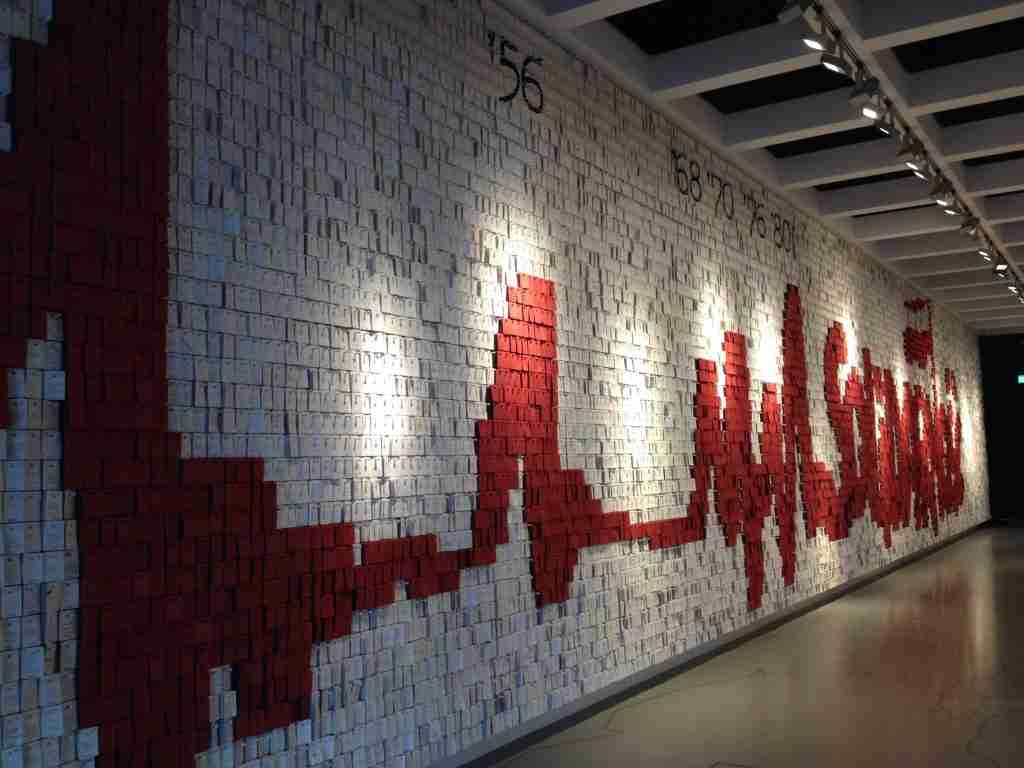 No other museum has ever made me feel as deeply as the Solidarity museum did. When I was growing up in Communist China, I was taught in no uncertain terms to never, ever speak up against the Communists. In China, we have a saying “the tallest blade of grass gets cut first,” so the idea that this one guy not only spoke up, but managed to bring about the collapse of the Soviet Union, and he did it without resorting to violence made me want to pump my fist in the air.

Anyway, I’m not exaggerating when I say the Solidarity museum is, hands down, the best museum I’ve ever visited in my life. I highly recommend going if you’re ever in Gdansk.

Gdansk, known as the “Free City” because of its semi-autonomous city-state status from 1920 to 1939, is still more liberal in its thinking than the rest of Poland.

In fact, while we were there, we saw a woman standing in the street wearing a T-shirt with a cannabis leaf that said, “f*ck the police” and openly smoking pot.

The citizens of Gdansk value freedom of thought and expression and they do not give a f*ck. So of course, I felt right at home. 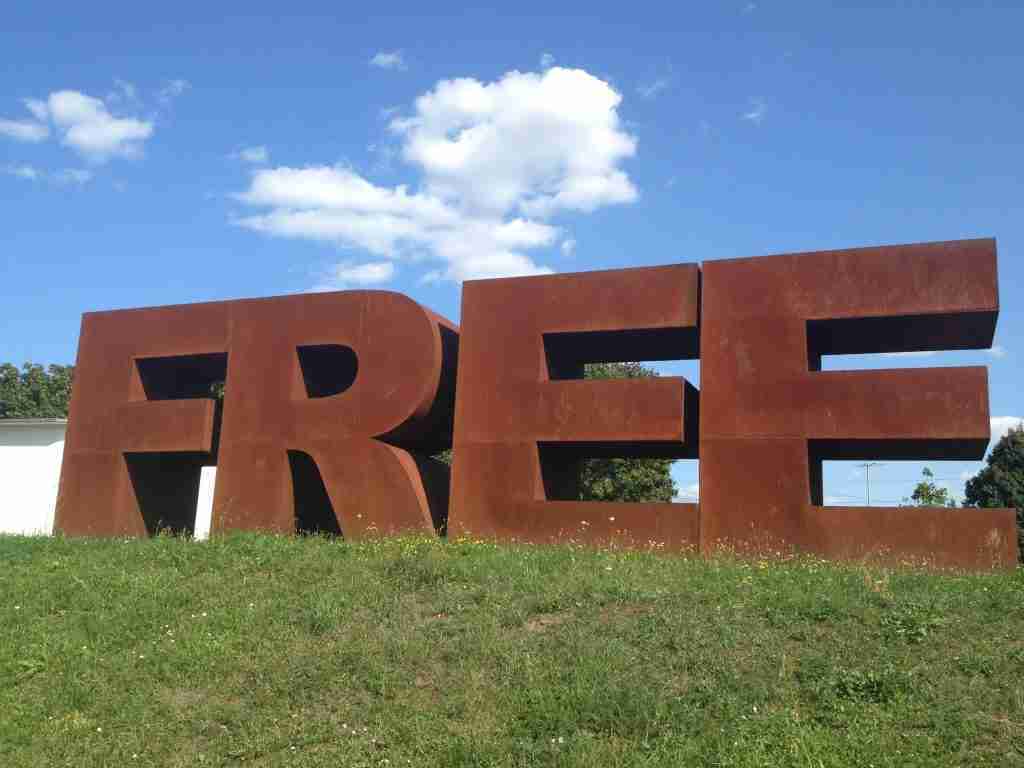 An old prison building we visited had a headless statue on its tower. When we asked the Sandeman’s tour guide about it, she told us there are 2 theories:

1) A thief wanted to get through the city gate and tried to bribe a guard to get in. The towns people capture him and beheaded him. To teach intruders a lesson, they made this statue.

2) A guard’s daughter fell in love with a man and asked him to marry her, but he turned her down. So, she tricked her father into arresting him. After putting her Dad to sleep with some sleeping meds, she dressed up as her Dad and cut the man’s head off.

Lesson learned: don’t f*ck with the citizens of Gdansk. 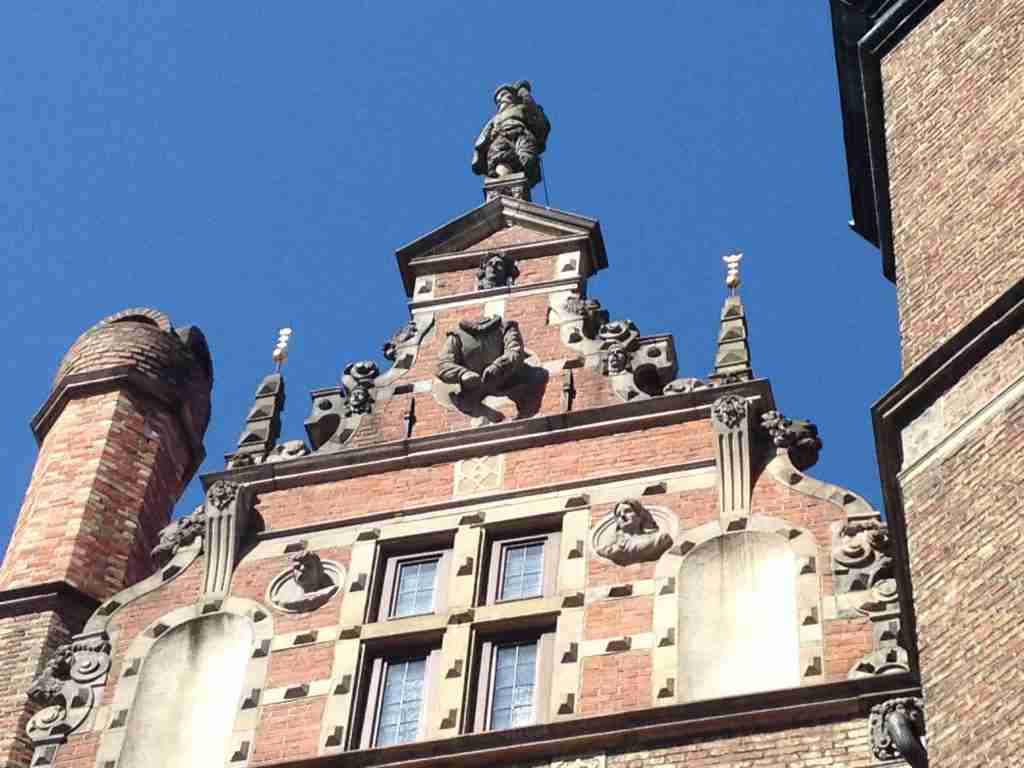 Did you know that Gdansk is actually part of a tri-city area that includes 3 gorgeous sea-side towns? The other two are Gdynia and Sopot.

While we were there, we went to the beach in Gdynia and a spa in Sopot:

Are we in the Sahara desert? This was my first thought when I got to the Polish Dunes. Even though it was a bit of a trek (take a train to Lębork, switch to another train to get to Leba, walk 25 mins to Rabka– the car park area, then take a golf cart to the dunes or walk for an hour. *phew* See? Easy peasy), it was truly amazing to see. I didn’t think I’d see desert, glacial lakes, and mountains all in one country, but Poland blows me away once again. 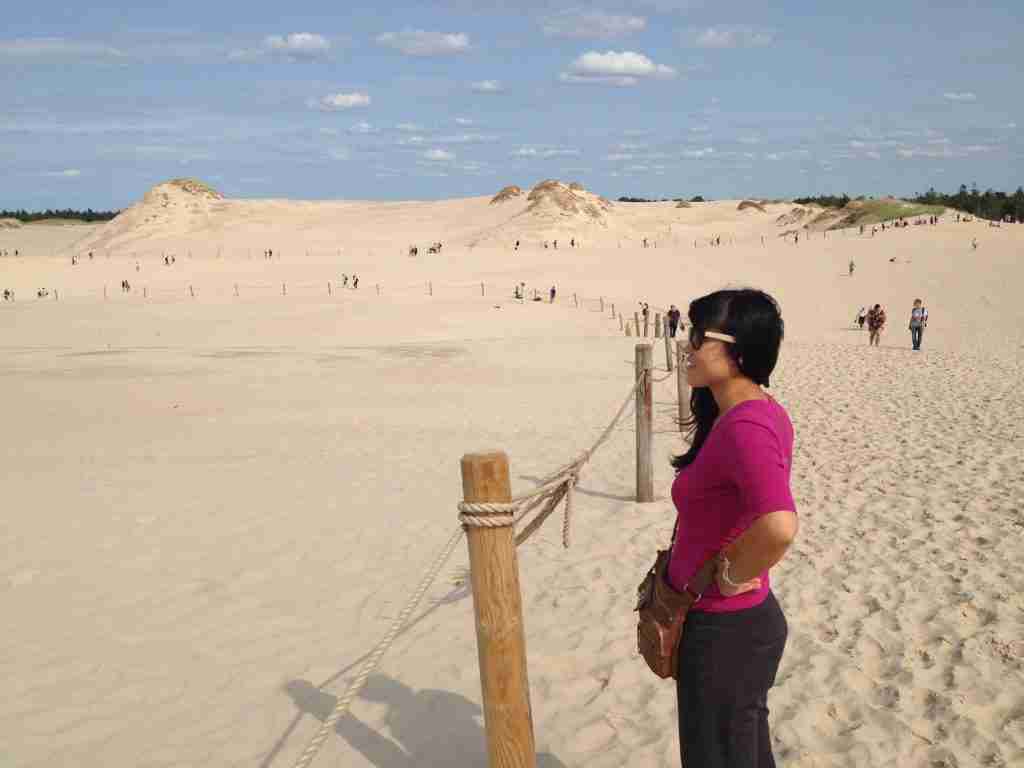 I know I’ve said this before, but of all the countries I’ve visited in Europe, Poland is the most surprising. Not only did it have the best value, all the cool landscapes, history, and tasty food completely blew away my expectations. I honestly don’t know why Poland is so underrated because for a place with so much to offer, I’m shocked that more travellers haven’t discovered this gem.

Here’s how much we spent in Gdansk:

What do you think? Have you ever been to Gdansk? Would you go?