Let’s Go Exploring! Lagos, Portgual: Are You a Mountain or a Beach Person?

This got me thinking. As a kid, talking to a stranger made me break out in hives and going to a party was hell. I was painfully shy. If you’d given me the option of hibernating in the mountains or partying it up on a beach, I’d have gladly picked the former.

This changed as I got older. I’m no longer terrified by strangers and parties are actually fun! Coincidentally, I also learned how to scuba dive and I now love beaches as much as I love mountains.

Is there a correlation?

I decided to test it out on Wanderer. “Which do you prefer? Beaches or mountains?”

He responded by smirking and staring down at my boobs. “Oh I think you know the answer.”

I rolled my eyes. “C’mon seriously.”

Wanderer’s answer didn’t surprise me. After all he’s much happier sitting at a pub, chatting up strangers, curling his fingers around a beer bottle than curling up with a good book. He’s definitely a beach bum.

Lucky for us, after we arrived in Lagos Portugal I didn’t have to choose. You could hike up a cliff, admire the view, then walk down to a sandy beach and hang out with other travellers. It’s made for both introverts and extroverts.

Situated in the Algarve region (southern coastline of Portugal), Lagos has so many beautiful beaches, we could’ve gone to a different one every day without getting bored.

Here are a few of our favourites:

Picture this. You’re sitting in a shiny modern café, its floor-to-ceiling glass window giving you an 360-degree view of the Algarve coastline, savouring an orgasmically good slice of chocolate cake and a sublime cup of café con leite.

This was the experience we had at O Camilo, the café/restaurant at the top of the cliff at Praia do Camilo, with a view to die for.

After finishing your dessert, make your way down the 200 or so winding wooden steps to the bottom of the cliff, park your butt on a stretch of golden sand and feel all your stress melt away as the sun lazily drops over the horizon. 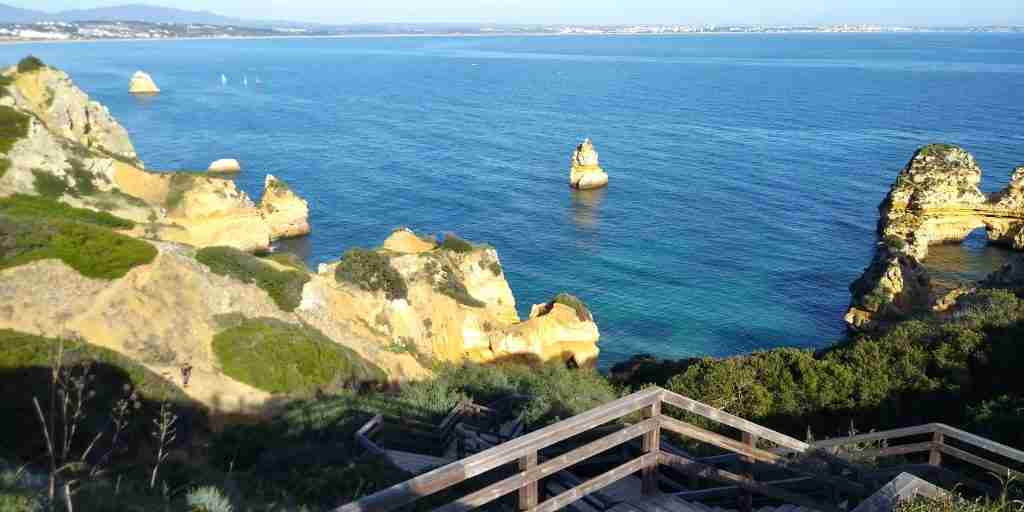 It only took us 15 min to walk from our Airbnb to this beach, which, I soon found out had the most soothing pile of rocks I have ever seen. If you’re wondering why I’m describing a pile of rocks as “soothing”, just look at this picture: 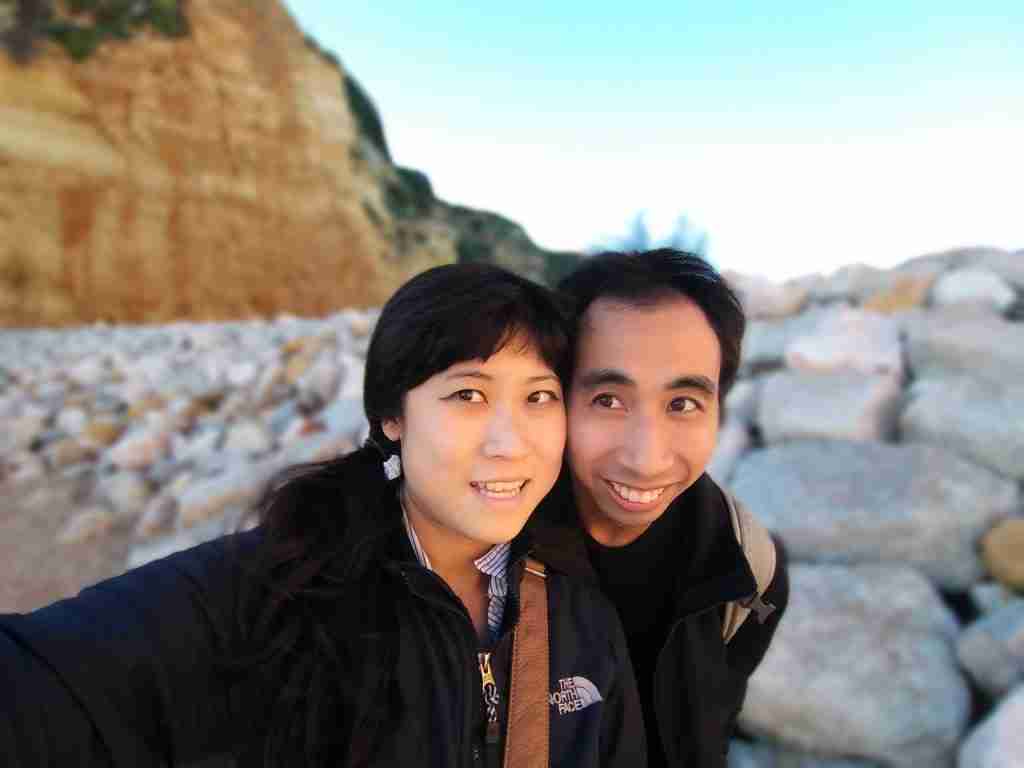 I immediately got a joygasm from the symmetry and color of this deeply satisfying arrangement of rocks.

I guess you could say this beach “rocks my world”. *slow sarcastic clap* 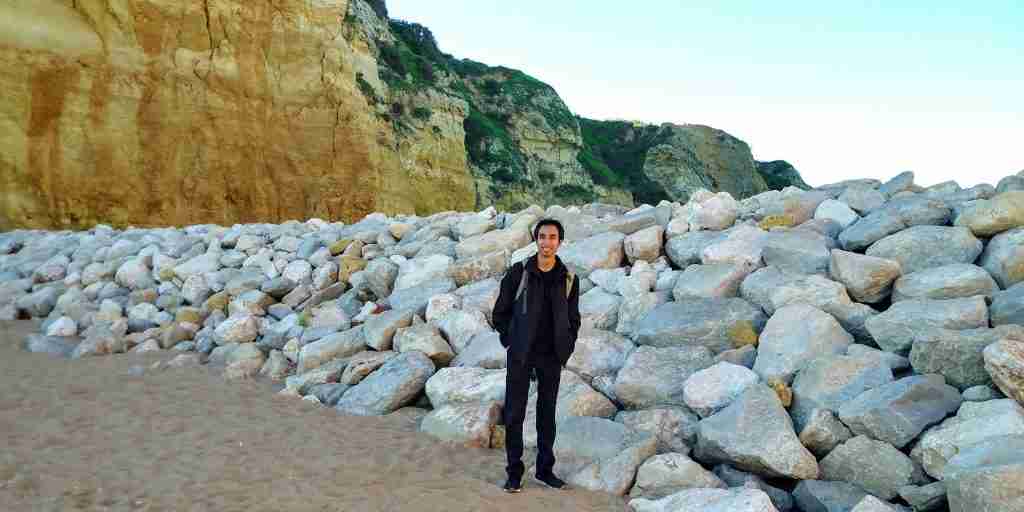 One of the most satisfying hikes we did in Lagos was around the Ponta da Piedade viewpoint. Just don’t get too close to the edge as you’ll find a steep drop into the ocean along some of the hiking paths. Luckily there are signs to indicate where you can go, so you won’t accidentally plunge off a cliff. 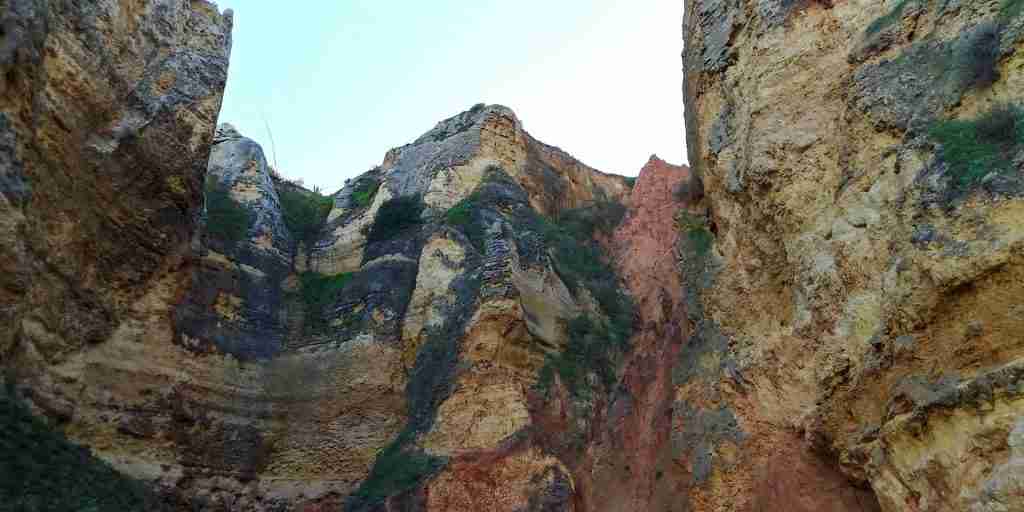 After walking down about a gazillion steps, you reach a platform that juts out to sea and from there you can take a boat out to explore sandstone caves: 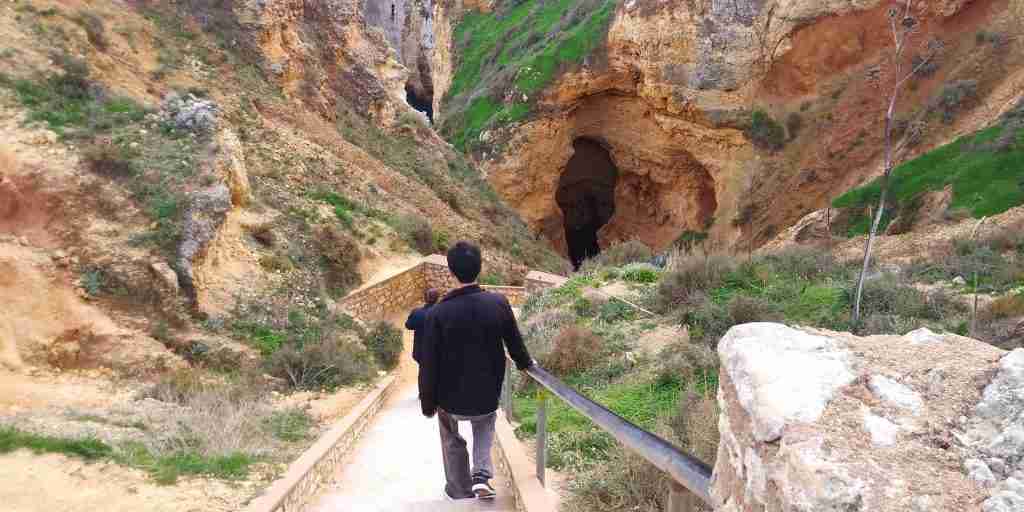 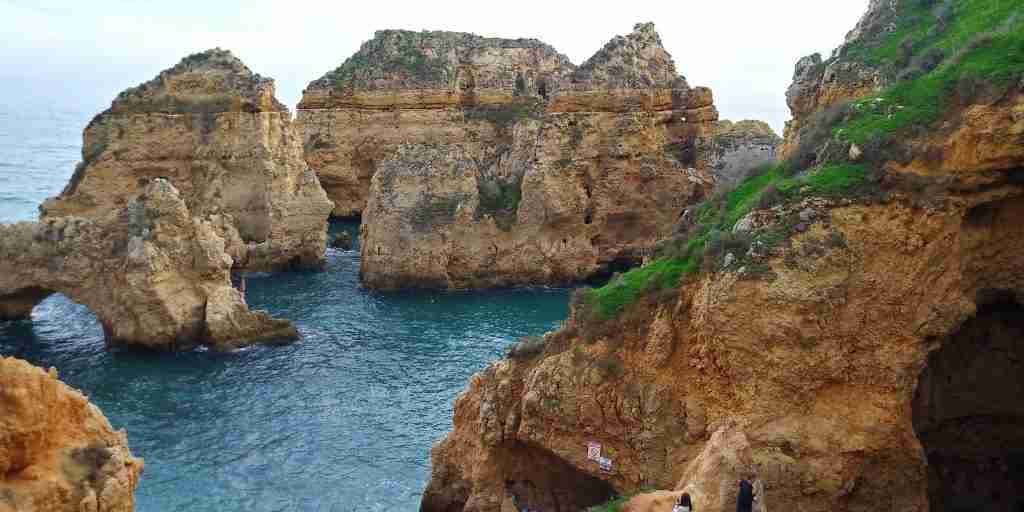 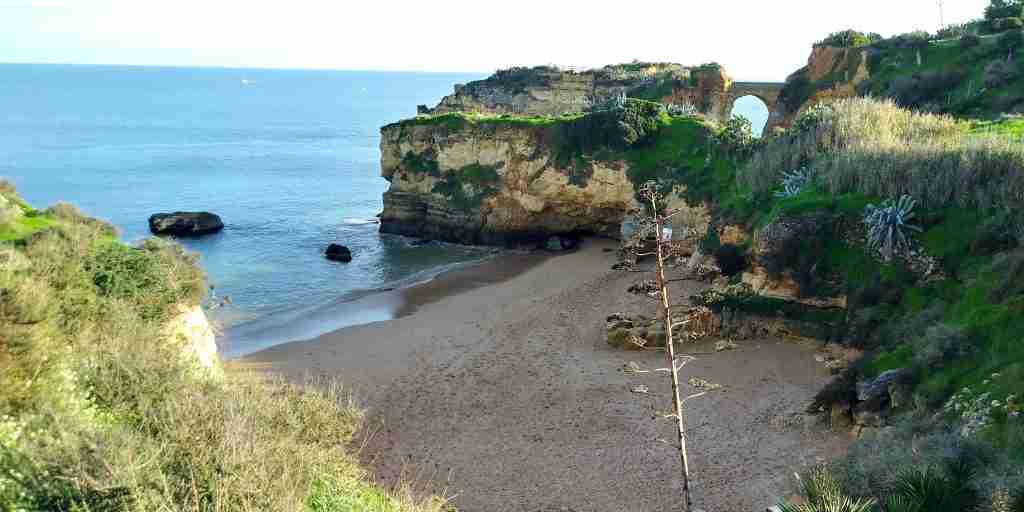 If you haven’t gotten the theme by now, the crème-de-la-crème of the Algarve is its multi-hued sandstone cliffs. But if you ever get bored of these mind-blowing formations, you can go back to your run-of-the-mill, paddle-board, normal beach:

I have to admit, I made the mistake of visiting this beach after going to the other beaches first. So when Wanderer asked me I thought of it, I just shrugged and said “Meh”.

Am I turning into an insufferable beach-brat? Yes. Do I demand that all the beaches I now visit come with sandstone cliffs? Yes.

You see what I mean by an insane number of beaches? If you get bored from this, there is no pleasing you. And finally onto a non-beach topic… 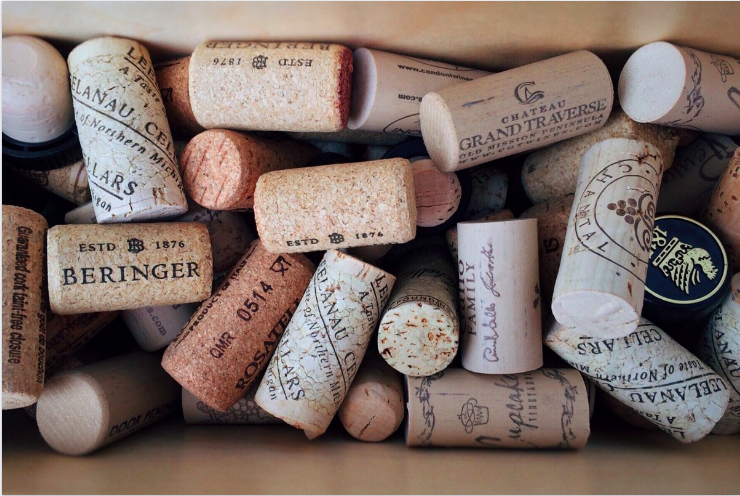 For some reason, Lagotians (?) really love crushing the hell out of corks and then making it into random things.

Cork purses? Yeah, sure why not.

Cork umbrella? What? You mean you don’t have one? Weirdo.

So for those of you who want all your shit to smell like the inside of a wine bottle, pick up some of these “corky” finds.

After deciding I could live without a cork purse, we headed to our favourite restaurant: 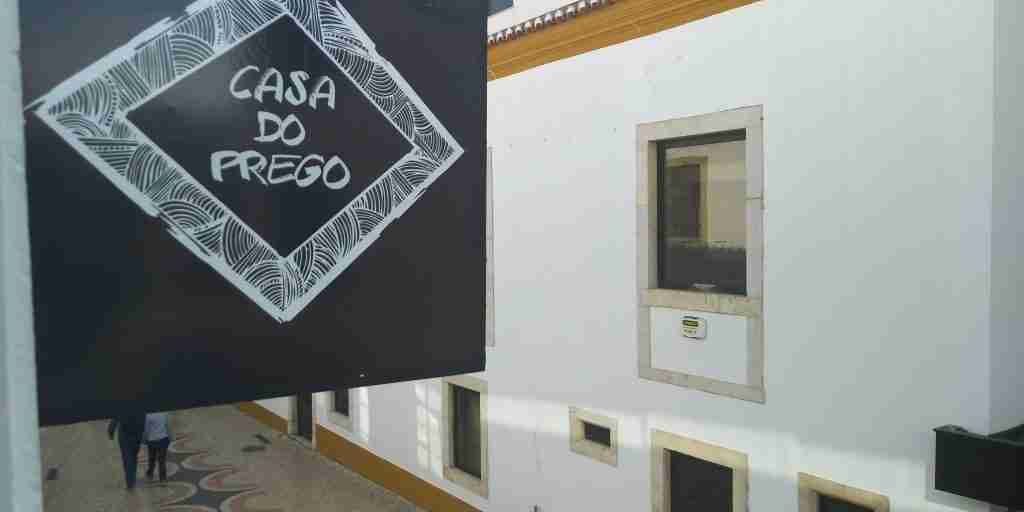 Last time I wrote about Porto , I mentioned how much I love their specialty—Pregos. So of course, the next time we’re in Portugal, we just had to have one of those: 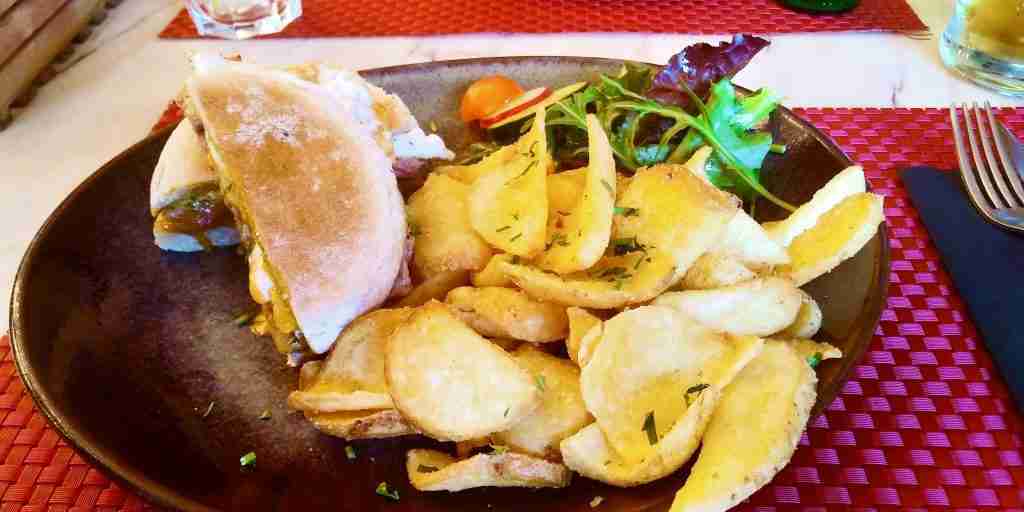 And then just to placate myself by pretending to be healthy, I ordered this salad: 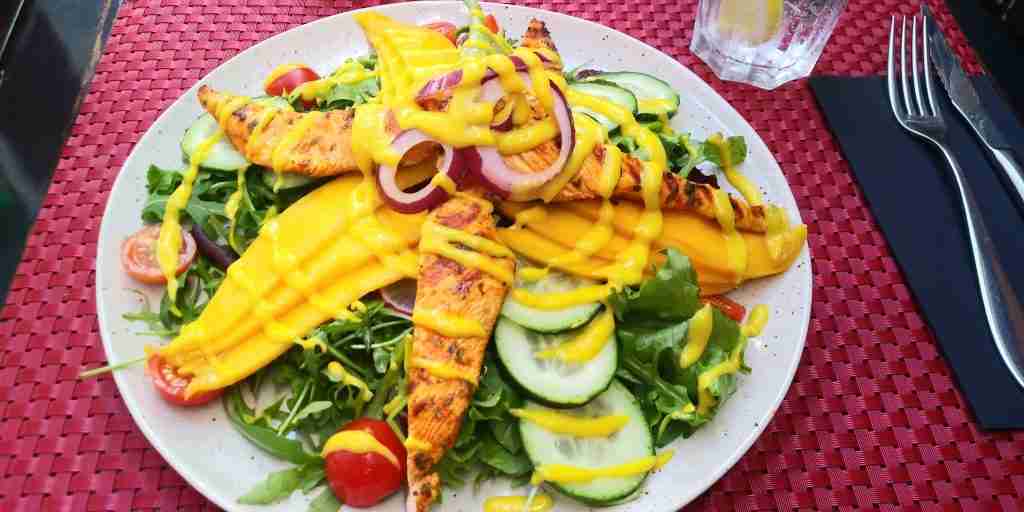 Now, since I’ve been raving about Lagos, you might think there are no downsides. But if you ever decide to visit this place and its surrounding beachside town, avoid the EVA buses in Lagos at all costs.

Seriously. They are horrible. It takes forever to get anywhere, and the scowling ticket booth operator makes Naomi Campbell look like Mother Teresa.

Normally in Europe, I always advocate for public transportation (since it’s so much more convenient and efficient than driving), but in this case, don’t.

Do yourself a favour and go to Marina Rent-a-Car. They have great rates and fantastic service.

Okay, so that’s it for Lagos. Here’s how much we spent:

What do you think? Are you a beach person or a mountain person? Would you go to Lagos?