Let’s Go Exploring! Auschwitz: My Most Memorable Experience in Poland

One of my most memorable experiences in Poland was visiting Auschwitz.

To be perfectly honest, I almost didn’t go, knowing how I felt after visiting The Killing Fields in Cambodia. I knew I’d have nightmares for days or even weeks afterwards. But I knew I couldn’t miss this important piece of history. After all, as horrifying as the Holocaust was, and as much as we all want to forget it, the only way we can prevent history from repeating itself is to remember it. Not going would be an insult to the memory of all those innocent victims who suffered at the hands of the Nazis.

So I sucked it up, got myself mentally prepared, and bought bus tickets to Oświęcim (the Polish spelling of Auschwitz) from Krakow.

Now, here’s where I need to stop and give you my “viewers discretion is advised” shpiel, because if you don’t want to see graphic pictures and unsettling stories, please stop reading here.

Just so that you don’t feel like you wasted your click, here’s a picture of a puppy in a teacup: 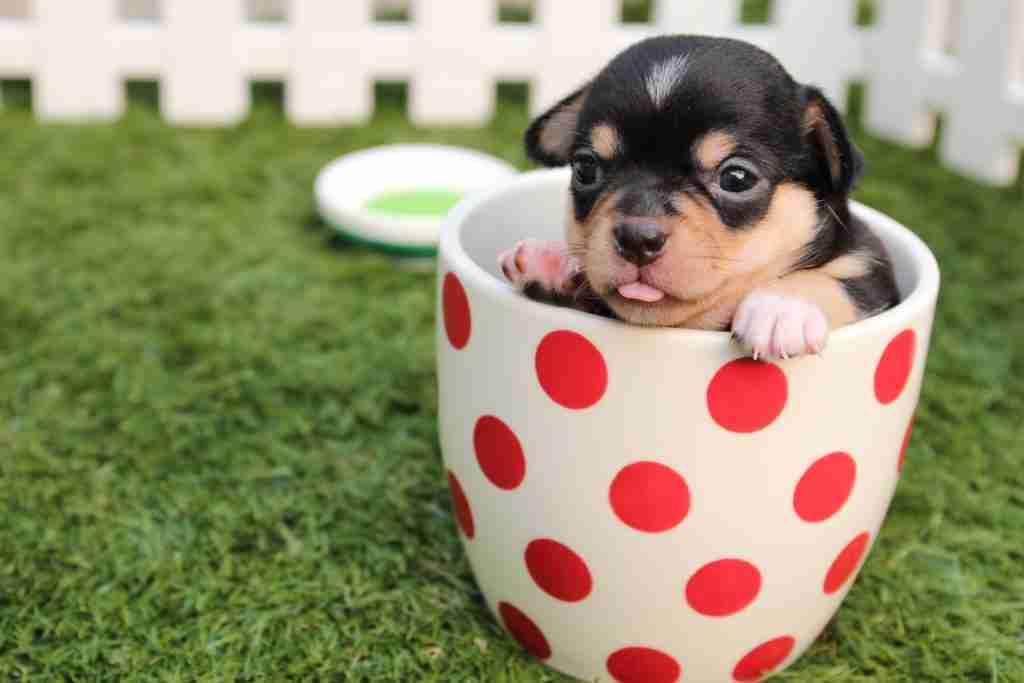 For the rest of you, here’s what happened when we went to Auschwitz.

We wanted to walk around and really absorb the stories without being rushed by a guide, so we go there at 8:45am in the morning. Apparently, the only times you’re allowed to visit Auschwitz without a guide is before 10am or after 3pm since 10am-3pm is their busiest time.

My first thought when I saw Auschwitz was “this place is creepily beautiful”. 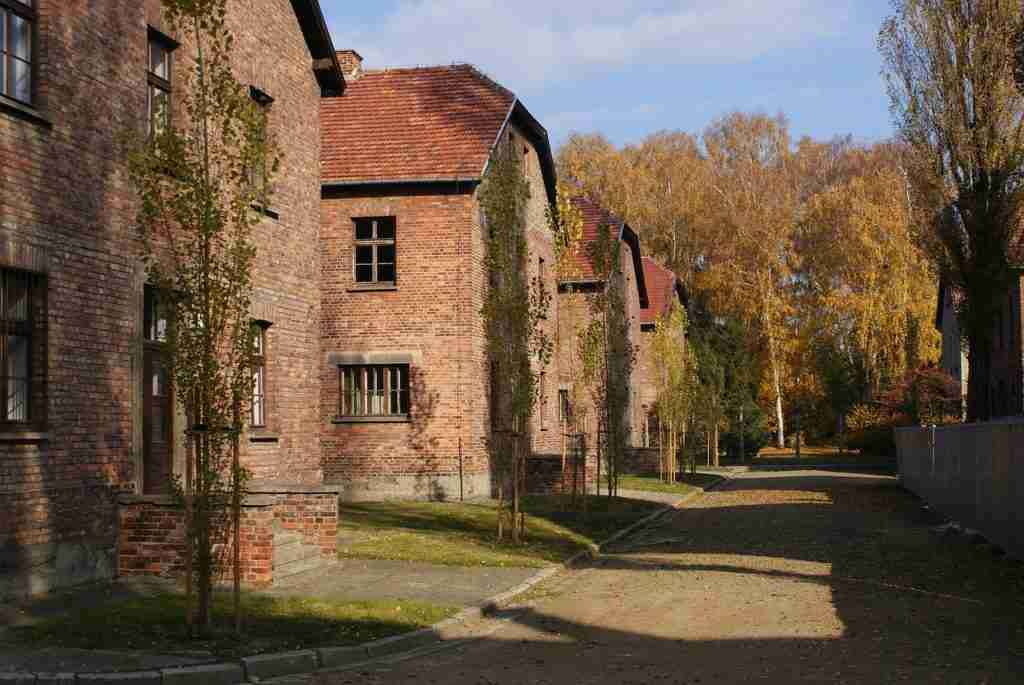 Because instead of a bleak, gray, Hellhole, we saw a serene little town, full of green foliage, under a impossibly blue sky. It was unnerving to say the least. I almost felt guilty, experiencing all this serenity. Shouldn’t it be thundering and storming? Or at least raining?

Pathetic fallacy aside, after waiting in line for about 30 mins to get our tickets (Auschwitz is free to get in by the way. The government felt it was better to turn the grounds into a museum and educate as many people as possible instead profiting off the murder of millions of people. Smart.), we got in pretty quickly.

Going through the main gate with a group of people really made the terror come alive.

Can you imagine seeing this as you are herded like cattle through the gate? 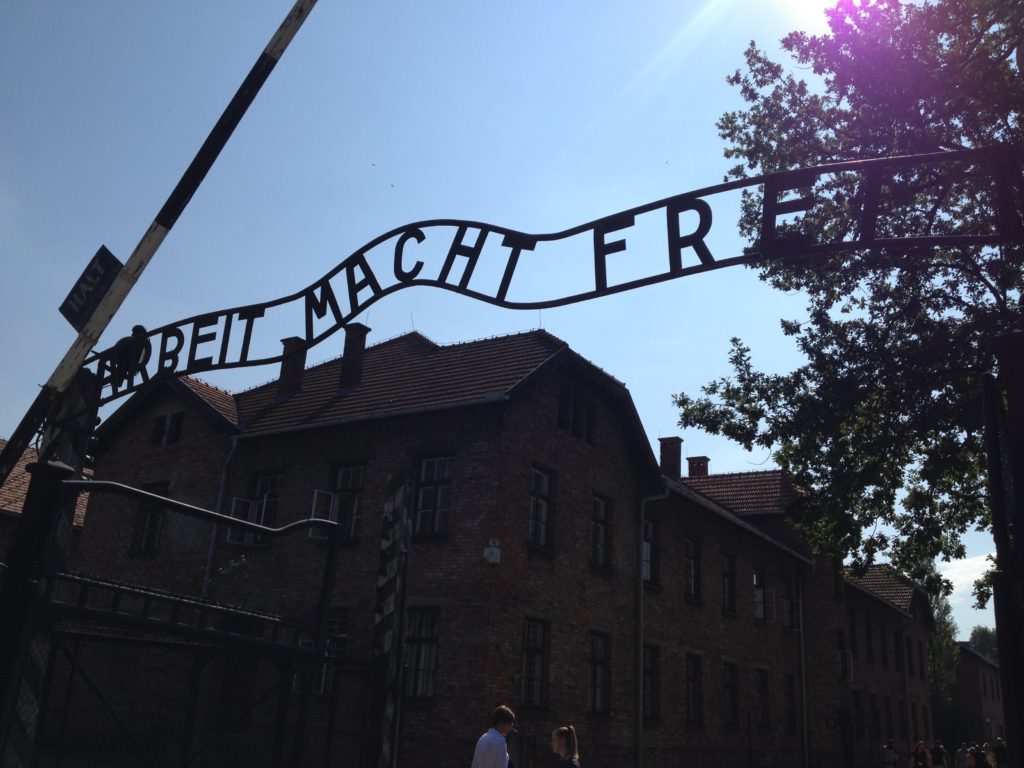 The words “Arbeit Macht Frei” translates to“Work will set you free”–a lie fabricated by the Nazi’s to give their victims false hope. If the prisoners thought working harder would set them free, they would be less likely to revolt and fight back. But in reality, the Nazis had one goal and one goal only: extermination.

The most obvious sign of this was the double-layer of barbed wire fences around the camp. 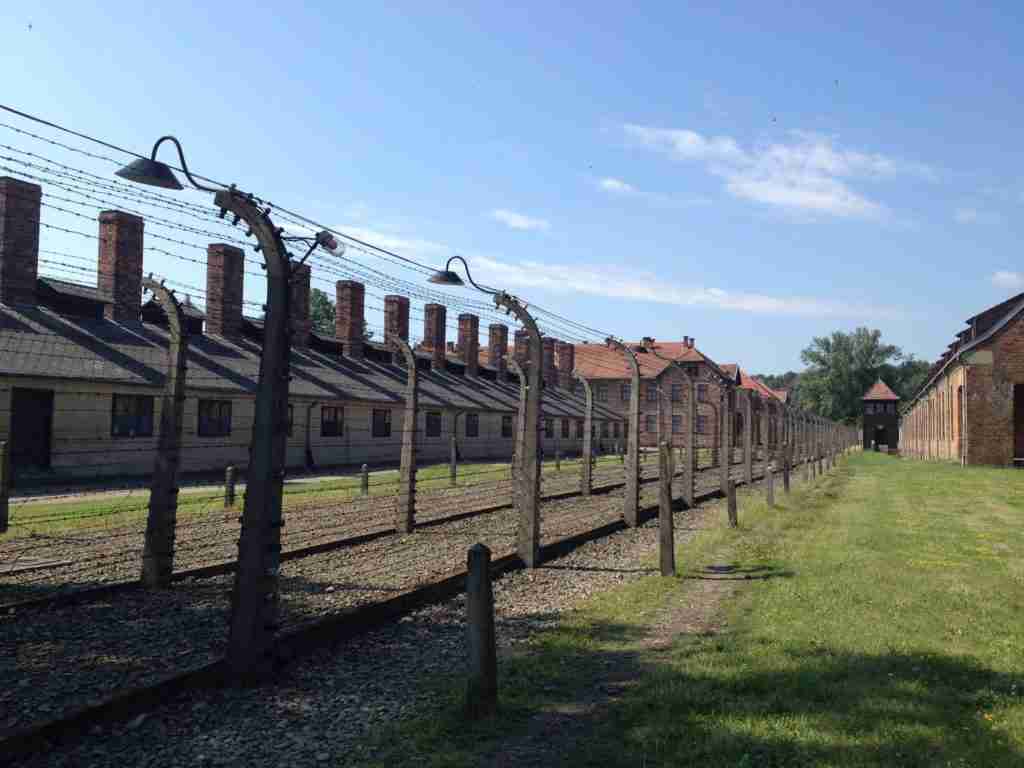 If anyone even stepped on the dirt next to the fences, the guards sitting in the watch towers would immediately mow them down with machine guns.

And for any prisoners who misbehaved (as in they asked a question or walked a little too slow), they could be strung up and hung on a hook. With hands tied behind their backs and then to this pole standing 6ft high, often they’d be dangling in the air, arms and shoulders popping out of their sockets.

Walking around Auschwitz, we saw barrack after barrack, each used to house over 1000 prisoners. The prisoners are long gone, but their memories are preserved here as a historic museum, telling their sad, tragic stories.

In these barracks, we also found disturbing evidence of Nazi crimes, such as this exhibit of shoes:

Why human hair? Because the prisoners had their heads shaved as soon as they entered the camp, and the hair was then sold to German companies to make stuff like pillows and carpets. And because these things were never tracked down after the war, apparently it’s still completely possible for someone in Germany to be sleeping on a pillow made of human hair from an Auschwitz victim and not know it. That is horrifying.

The Nazi’s also used the skin of the victims to make lampshades and bind books, and their fat was used to make soap after stuffing their bodies into the ovens. It truly was an industrialized effort to not just murder, but to exploit and profit off that murder.

Which leads me to the scariest artifact of all:

This is the furnace where they burned the bodies right after they gassed them in the chamber right next door.

At one point, they were burning as many as 340 bodies every 24 hours and gassing even more.

In the gas chambers, they piled these rooms with up to 800 people and then tossed babies in from the window—like burning a pile of trash and shoving in a cardboard box as an after thought.

The prisons were told to get naked, given a bar of soap, and told they were taking a shower. But once they were locked inside the “shower room”, pellets of potassium cyanide were dropped in through a vent in the ceiling.

Inhaling the gas was so excruciating, the victims tried to claw over one another to get to higher ground where they could get more air.

See those scratch marks there? Those were made by the fingernails of victims, trying to claw their way out.

After seeing this, I have nightmares every time I step inside a sauna or a steam room. I can’t help but think about all the fear, pain, and panic all those innocent victims felt when they were caged and suffocated to death.

By the time we left Auschwitz, I was teary-eyed, shaky, and nauseous from everything I’d seen.

But as it turns out that was just the tip of the fucked-up torture and brutality iceberg.

Because what we saw next was Birkenau, the second camp they built (using slave labour from their victims) with the exclusive purpose of murder. 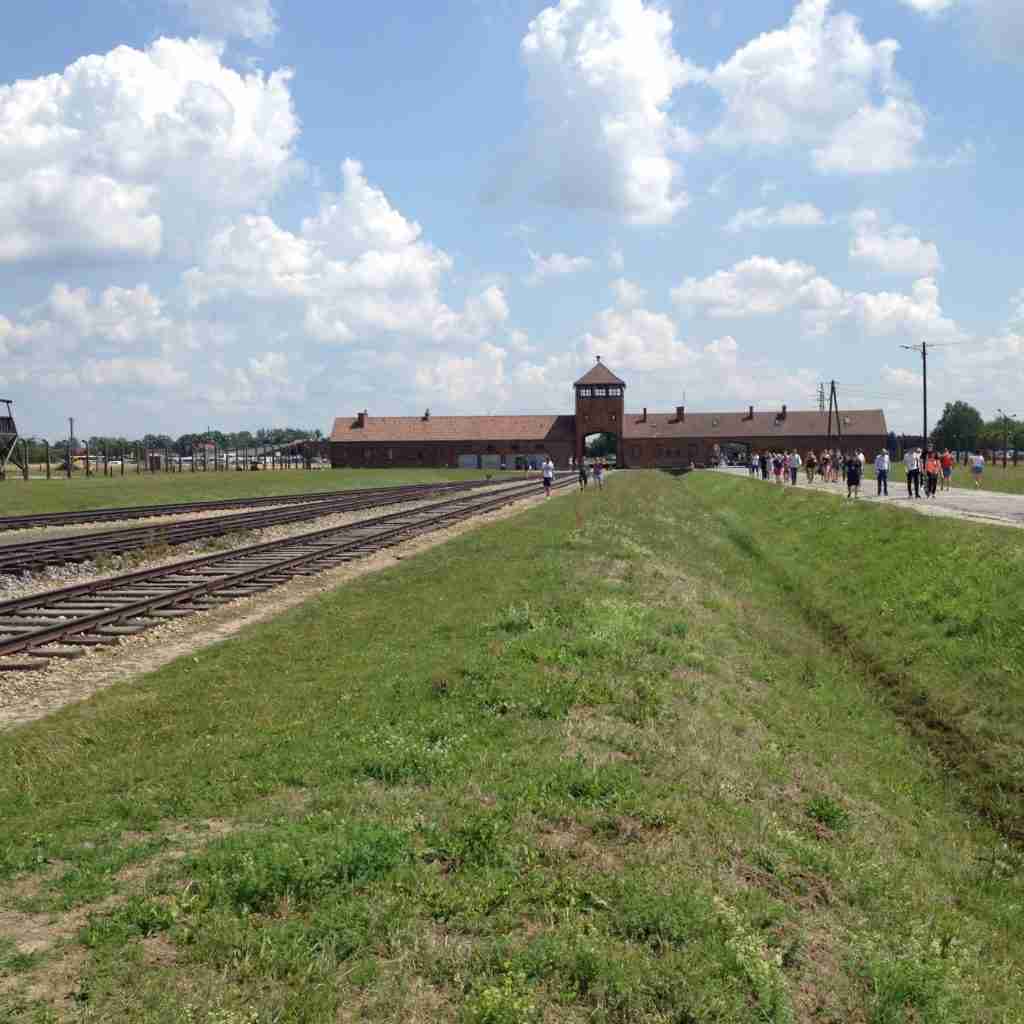 They went about murdering 1.1 Million people here with such swift, heartless efficiency, it took my breath away.

The place was sprawling—as wide as several football fields. Rows, upon rows of barracks stood here, so many that I lost count after walking for what felt like miles. 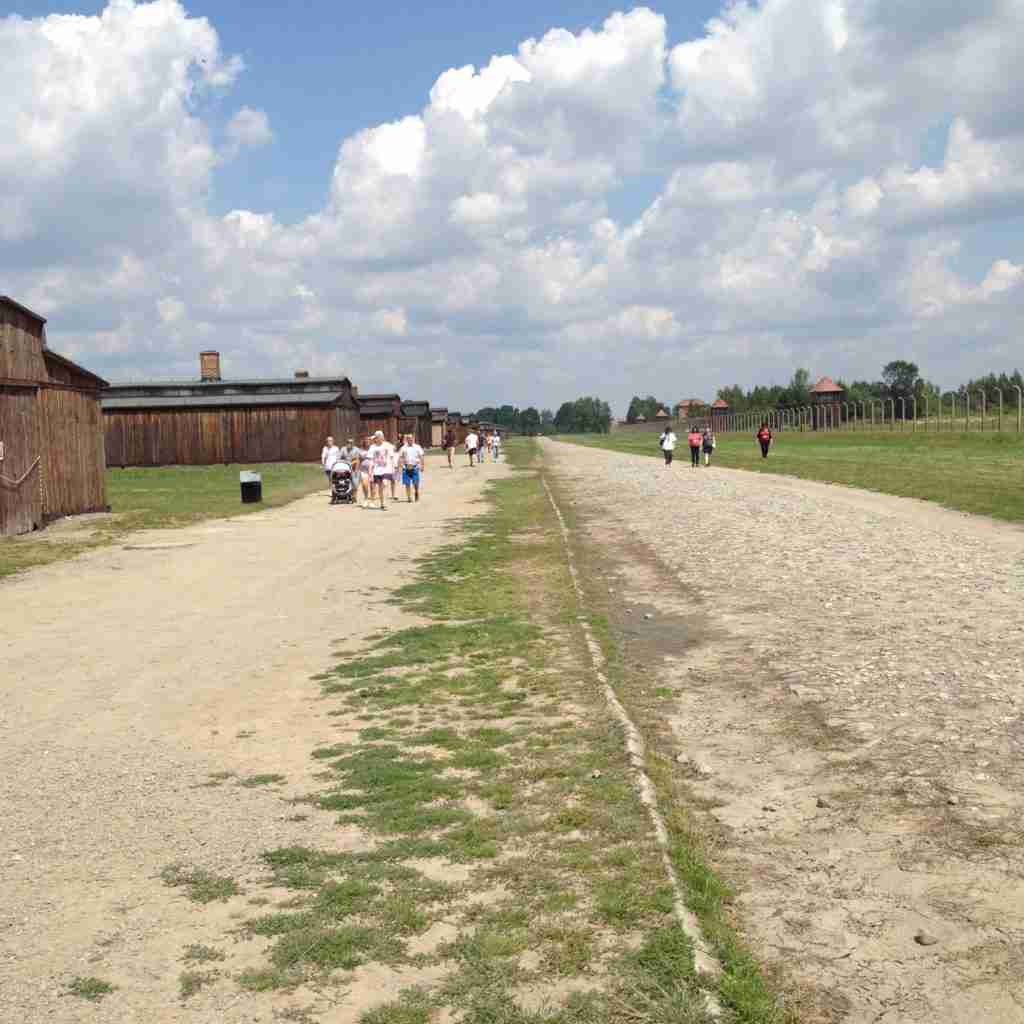 Even though these barracks were originally stables made to only hold 50 horses, the guards cramped as many as 400 people per barrack. Inside, it had two rows of toilets and all the prisons had to share, living amongst open sewage and no heat during the winter to keep warm. 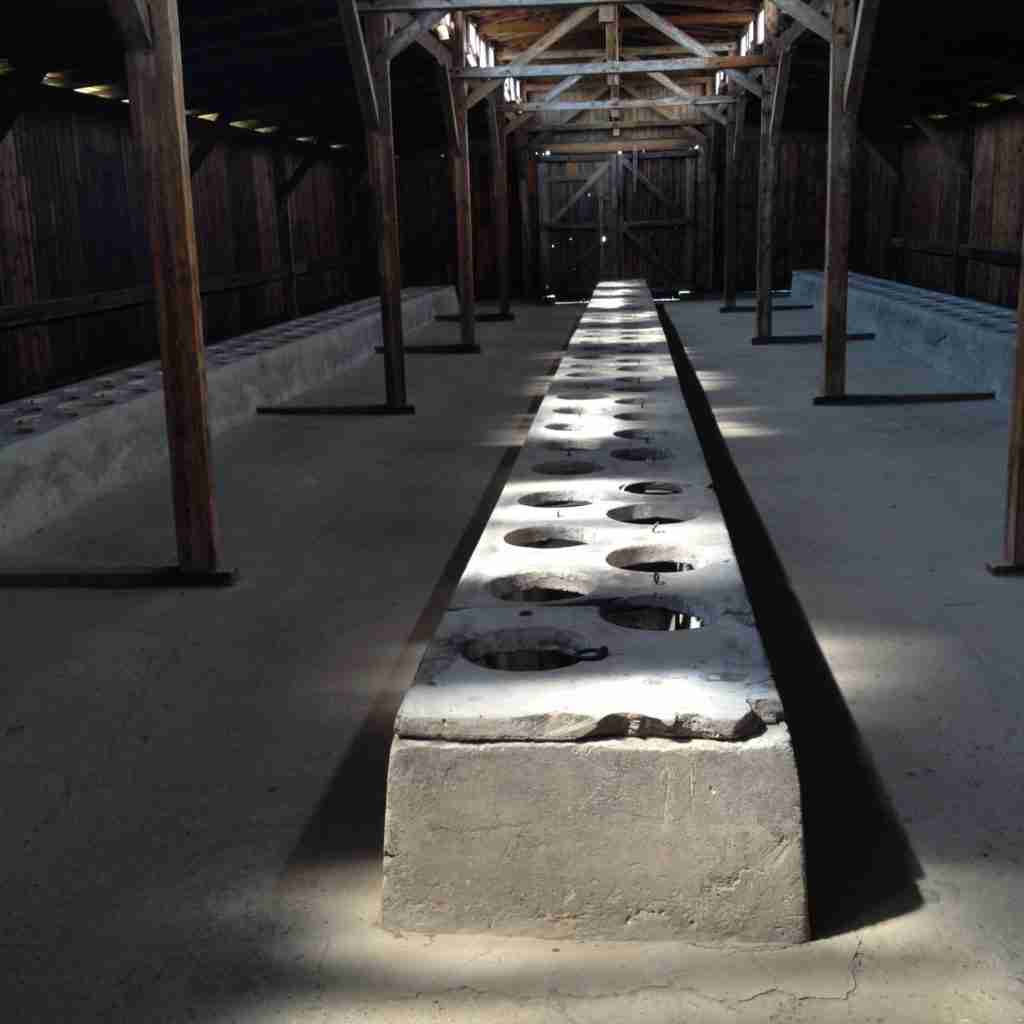 To transport so many prisoners here, they build an entire railroad leading into it and brought the victims by cattle cars. If 20 people stood shoulder to shoulder, they could barely fit, and yet the Nazis somehow managed to squeeze 80 people inside a single cattle car. They were kept inside for an entire week without water, food, or bathrooms during transportation. Many died on the trip before even getting to the extermination camp.

Once at the camp, they started separating the arrivals into 2 lines. The ones deemed stronger enough to work were sent off to do gruelling hard labour until they were worked to death. The others, the children, elderly, and sick, were immediately sent off to the gas chambers to be murdered. Of course, they didn’t tell the victims where they were going.

And the most horrifying thing of all? Sometimes the Sonderkommandos discovered members of their OWN families as they were cremating the bodies. But if they refused to work, they would be immediately shot.

Do you see how fucked up I thought it was that the sun was shinning, the sky as blue and the area looked so serene that day?

After visiting Auschwitz and Birkenau, I can never ever look at evens, cattle cars, or steam rooms the same way.

Now, I know this is one of my most bleak and depressing post ever, but I’d like to end this on a positive note, because one cannot mention the Holocaust without mentioning Oscar Schindler. Because he is proof that in the midst of all this brutality and hopelessness, when the Holocaust threatens to destroy our faith in humanity, humanity can also restore it.

If you’ve never watched Schindler’s List (what the HELL, have you been living in a cave?), Oscar Schindler was a German factory owner who saved 1200 jews during the Holocaust by employing them to make pots in his factory. If the Nazi’s had found out he was sheltering the Jews, he would’ve been sent off to the concentration camps right along side them, but he didn’t care. He decided he had to save his workers at the risk of his own life.

While we were in Krakow, we had the privilege of visiting his actual factory, where he saved 1200 Jews:

One of my favourite take-aways from Shindler’s factory is this quote: 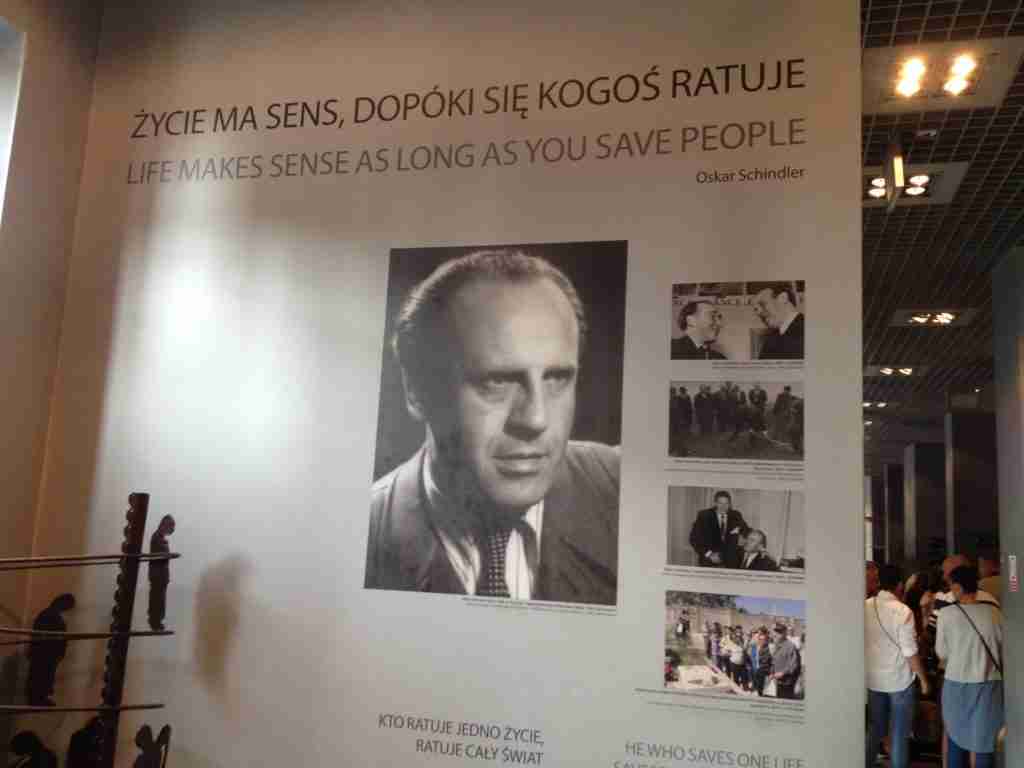 *phew* Okay, we got through it. If you’ve gotten this far, give yourself a pat on the back. I know it’s hard, but it’s important for us to remember this horrific events in history so we can prevent it from happening again.