In the U.S and Canada, unless you’re trading sex for money, there’s no need to get naked in public.

But in Germany, nudity doesn’t automatically illicit eroticism—it depends on the context. And in a sauna, it’s just practical.

We were told that bathing suits are not allowed—for health reasons, believe it or not—so if you want to experience a German sauna, you’ll have to bare it all.

Don’t worry though, despite being naked, you won’t be stared at or creeped out. Nor do you have to worry about having body issues. You’ll be around strangers of all different shapes, sizes, and ages, and no one will be staring at you. That goes against social etiquette. In Germany, nudism just isn’t a big deal.

And apparently this goes all the way back to the 50s and 60s. As it turns out, Freikoerperkultur (FKK) or Free Body Culture was even popular back in East Germany. Despite the harsh rule behind the Iron Curtain, East Germans got naked as a way to rebel from all the marches, uniforms, and conformity. Even Chancellor Angela Merkel is said to have practiced nudism during her youth.

So when we found out our Airbnb in Bremen was just a 5 minute walk from a spa and sauna, we decided to do as the Chancellor does and FKK that shit up. And let me tell you, the invigorating feeling of walking out of a cloud of steam and into a pool of freezing cold water makes it all worth while.

After leaving the Badehaus, we headed for downtown Bremen—a city of 500,000, just an hour train ride from Hamburg—where we were staying for the month. Our original plan was to stay in Hamburg (because unlike Bremen, I’d actually heard of it), but I found Bremen is a way better deal and we could easily visit Hamburg on day trips.

Here’s a travel tip. Since everything is so connected and transportation is so fast and cheap in Europe, if you ever end up accidentally booking too close to your travel date and can’t find any good deals, look for a nearby city within an hour train ride. You’ll get an especially good deal if the city is one that tourists haven’t heard of. This was helpful for us as experienced slow travellers, since we’ve seen all the big touristy cities and are always on the look out for the local experience. When it comes to travelling and early retirement, flexibility is the key.

And as it turns out, Bremen turned out to be the better, less touristy choice. Because not only was there a lack of big crowds, we found all sorts of fun historical sites to visit.

In Canada, city halls are just stuffy office buildings, but in Germany they are historical works of art.

Especially this one in Bremen, a UNESCO World Heritage building from the 1500s, which claims to be not just the most beautiful civic building in Germany, but in all of Europe.

We took a 1-hour tour, which showed us that there’s even more than what meets the eye when you step inside. 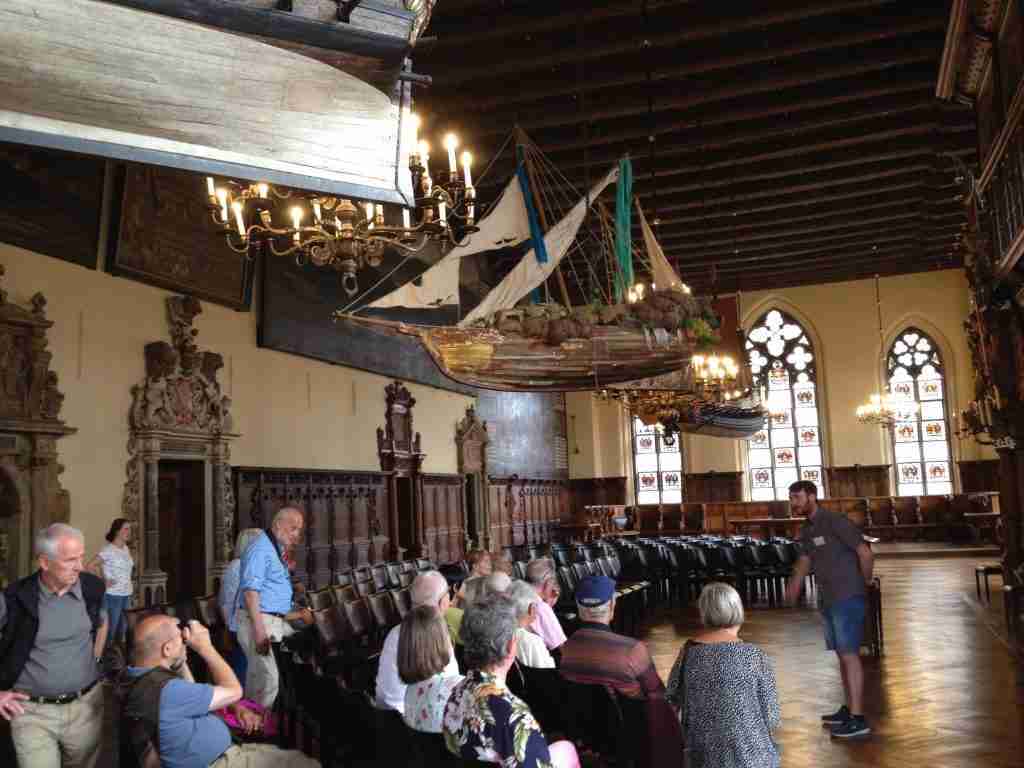 There’s even a secret room inside the lavish Upper Hall, decorated with Nouveau Art décor and reserved for VIP visitors—like Queen Elizabeth who visited in 1978.

Next, we took a walk around the Schnoor quarter, the oldest neighbourhood in the area.

If you like quaint little stores and timber-framed houses from the 1400 and 1500s, take a walk down this street and get an ice cream at the Schoko Stube. 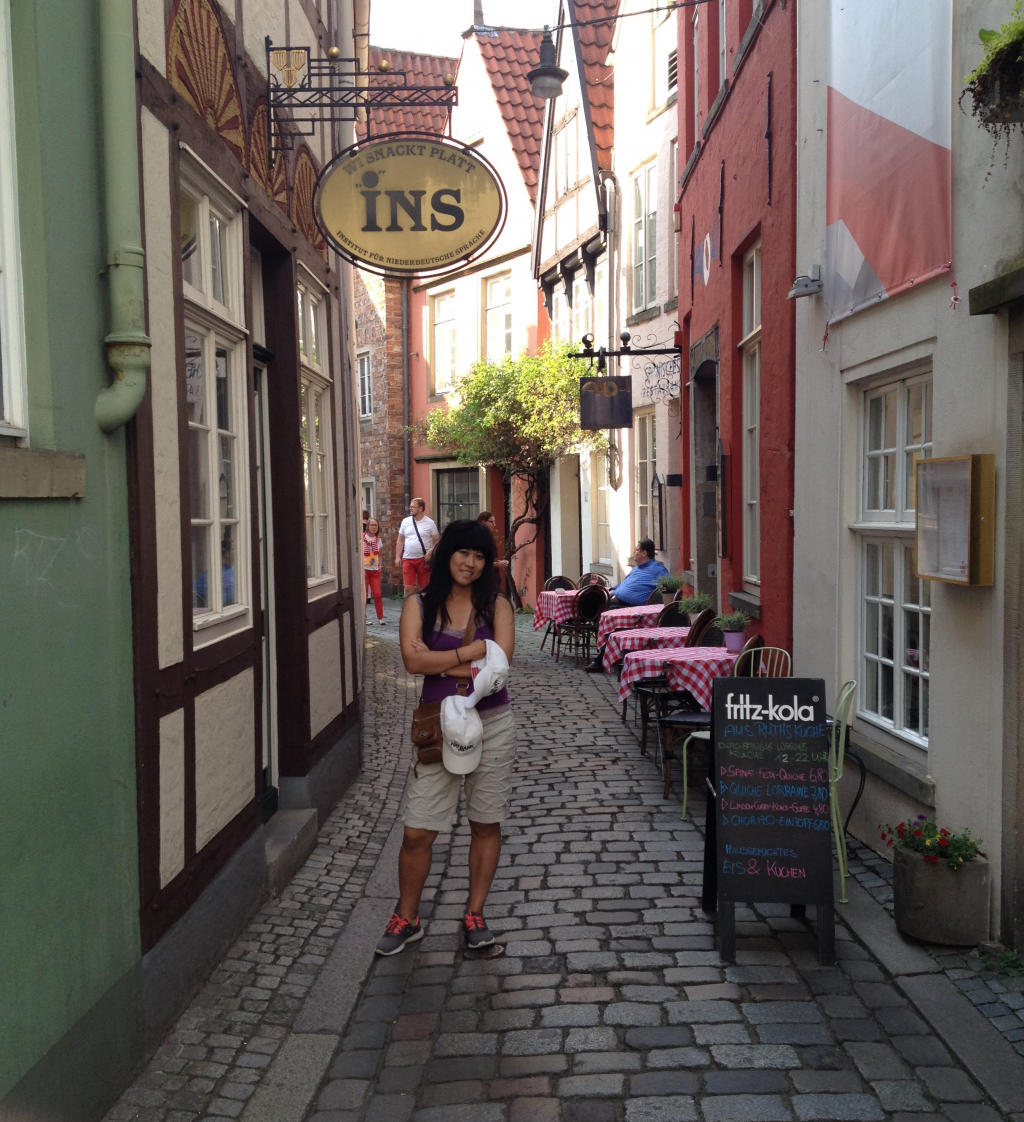 After waking around the Schnoor Quarter, we headed back to the town center and passed by a gigantic windmill, which made me feel like I was in Amsterdam: 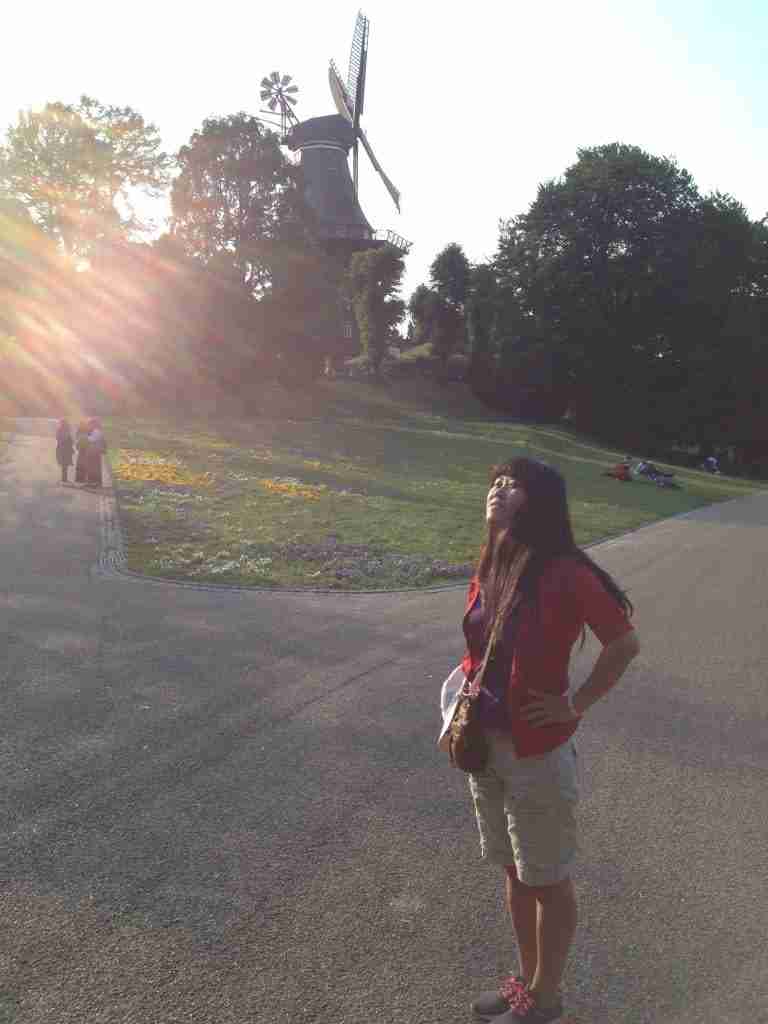 One of the most noticeable symbols of Bremen that you’ll see all over the city is this statue called “the Town Musicians of Bremen”, consisting of a donkey, dog, cat and rooster. 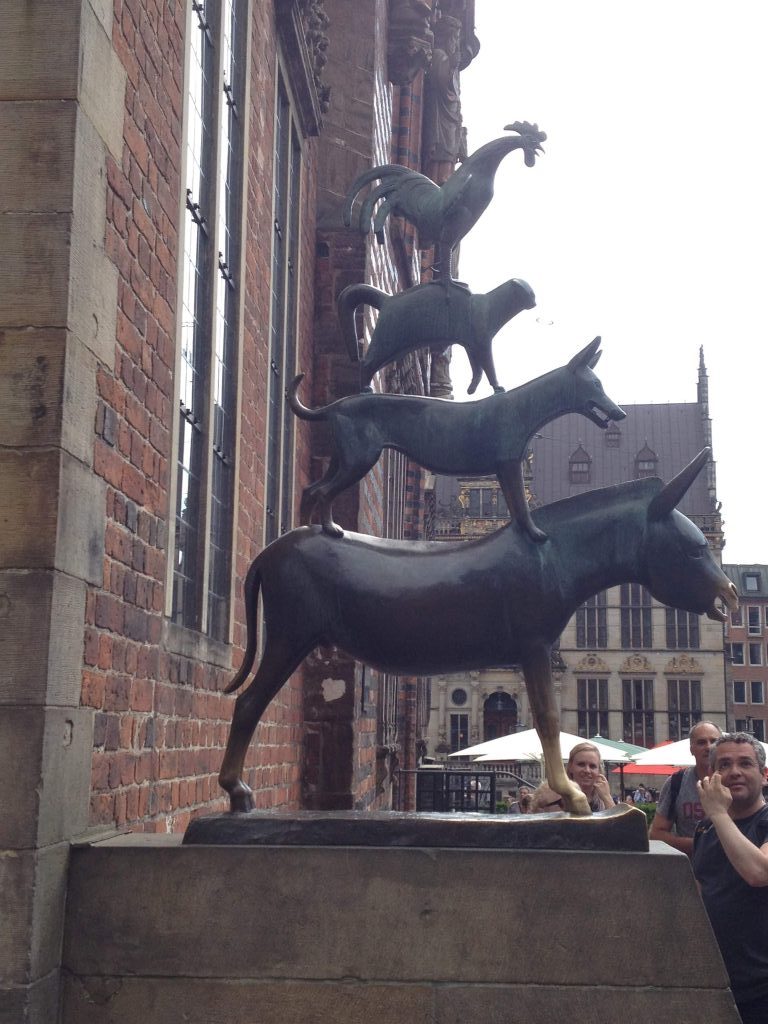 As I suspected, there was a cute story behind the adorable statue. In Grimm’s Fairy Tales, a donkey, a dog, and a rooter, ran away together after being abused by their masters. Apparently they were too old and outlived their usefulness. So to get away from their tyrant farmers, they decided to go to Bremen–a city known for its freedom–to become musicians.

On the way here, they came across a cottage. Through the window they saw 4 robbers, gleefully cackling at a bag of loot.

The 4 friends decide to scare the robbers by stacking themselves to look as tall as possible and make a loud, scary noise.

The robbers, being the most chickenshit robbers ever, got freaked out and ran away. Laughing, the animals take over the house, eat the stolen food and settle in for the evening.

In the middle of the night, one of the robbers try to sneak back in. But as soon as he steps into the pitch black living room, where the animals are sleeping, the cat opens his bright yellow eyes in the dark. The robber, idiotically thinks he’s seeing the embers of a fire (seriously? How did these guys ever managed to rob anyone?). And when he reaches over to light his candle on it, the cat hisses and scratches his face. Before he has time to fight back, the dog bites him on the leg, the donkey kicks him in the chest, and the rooster crows and chases him out the door.

Running back to his robber friends, he tells them that a witch scratched him with her long figure nails (the cat), an ogre stabbed him in the leg with a knife (the dog), a giant hit in him in the chest with a club (the donkey), and a judge screamed at him (I have no idea what a “judge” is but I don’t think it’s the kind that sits in a court room).

Terrified, the robbers abandoned the cottage, leaving the animals to live there happily for the rest of their lives.

So if you ever see a statue of a donkey, a dog, a cat, and rooster, stacked on top of each other, you’ll know that’s the symbol of Bremen. And if you ever get robbed by robbers that dumb, you should be embarrassed.

After the adorable story of the Musicians of Bremen, we headed for its most famous street:

Even though it’s only 100m long, this street is well known for its unique architecture. 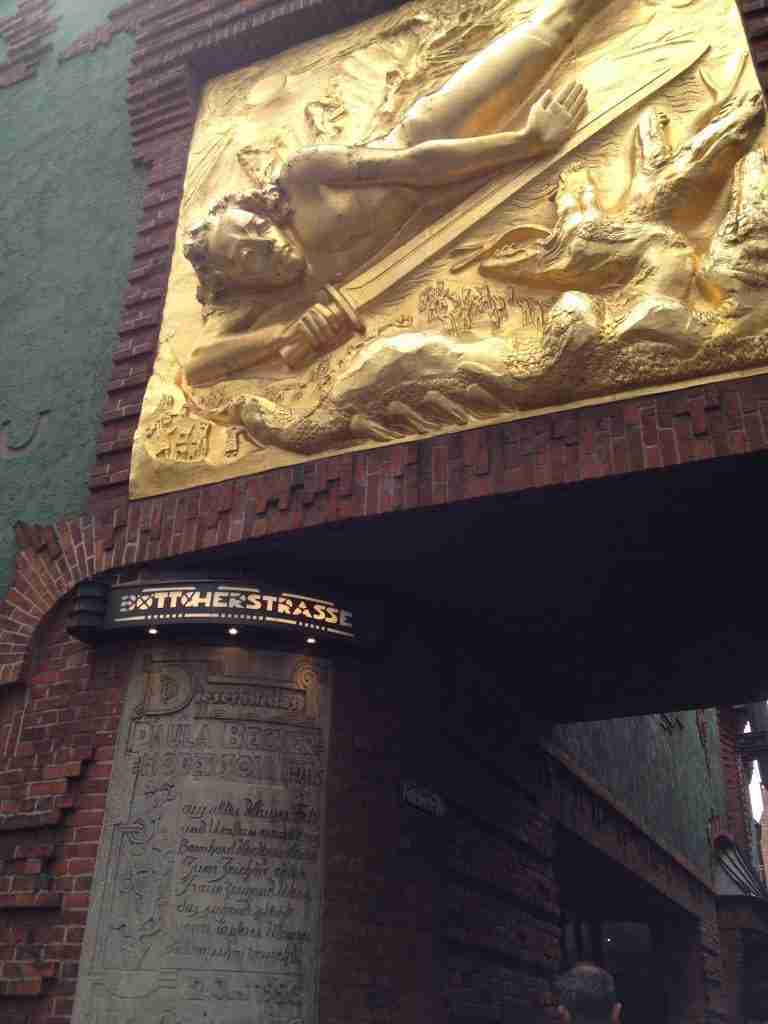 As you walk through the gate, you’ll see several art museums, crafts workshops, bars, restaurants, and shops, including a fun little candy shop where you can see them make the candy through the window.

My favourite sculpture on this street is “The Fountain of the Seven Lazy Brothers”, based on a legend about the sons of local farmer who were too lazy to be employed in Bremen. After travelling the world for a few years, they returned to the city. Armed with their new found knowledge, they returned with all sorts of technological innovations that improved work in the fields and automated much of the tough, manual labour, allowing the farm to produce higher yields at much faster speeds. They were then remembered for their ingenuity and hard work.

HA! Take that, hard work! No wonder Bill Gates once said he would “hire a lazy person to do a difficult job”.

Why? “Because a lazy person will find a easy way to do it.”

After visiting Böttcherstraße, we decided to celebrate our laziness by vegging out in a park—which came with a gorgeous fountain, its own little farm, and wild animals running around.

If you have kids and ever end up visiting in Bremen, take them to Buergerpark. Not only does it have a beautiful fountain and a playground, there’s a farm with adorable horses and pigs. You will likely also come across wild deer and rabbits. 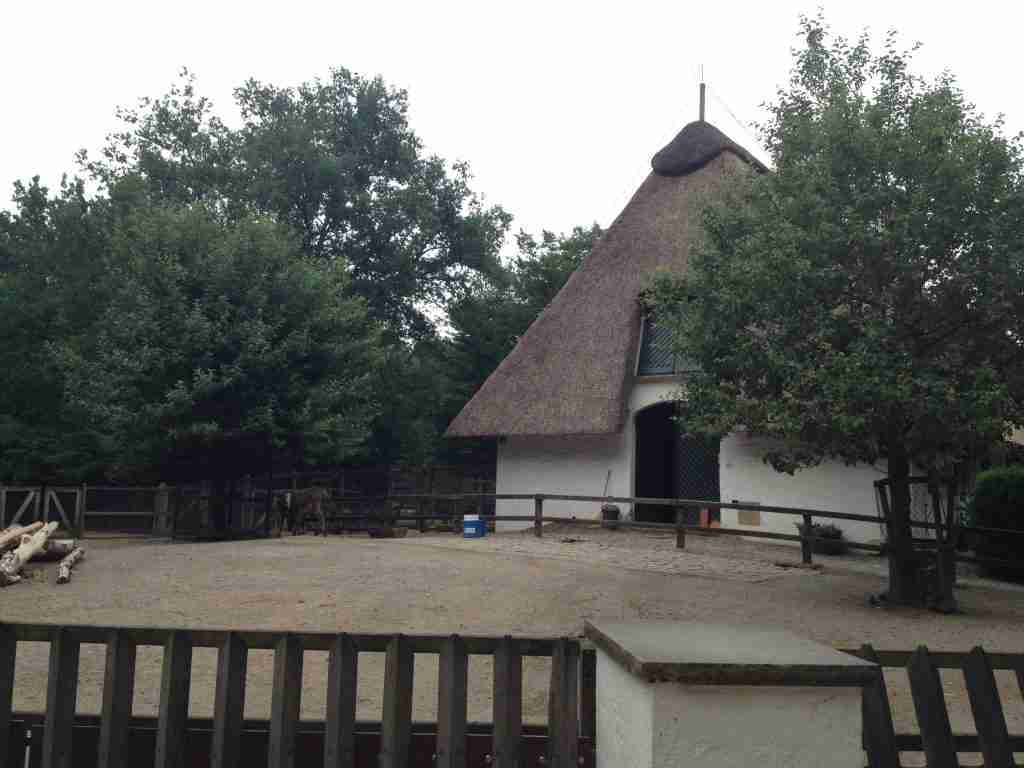 And if they’re little science nerds and like hands-on experiments, there’s also a Science center, called “Universum” in the shape of a clam! 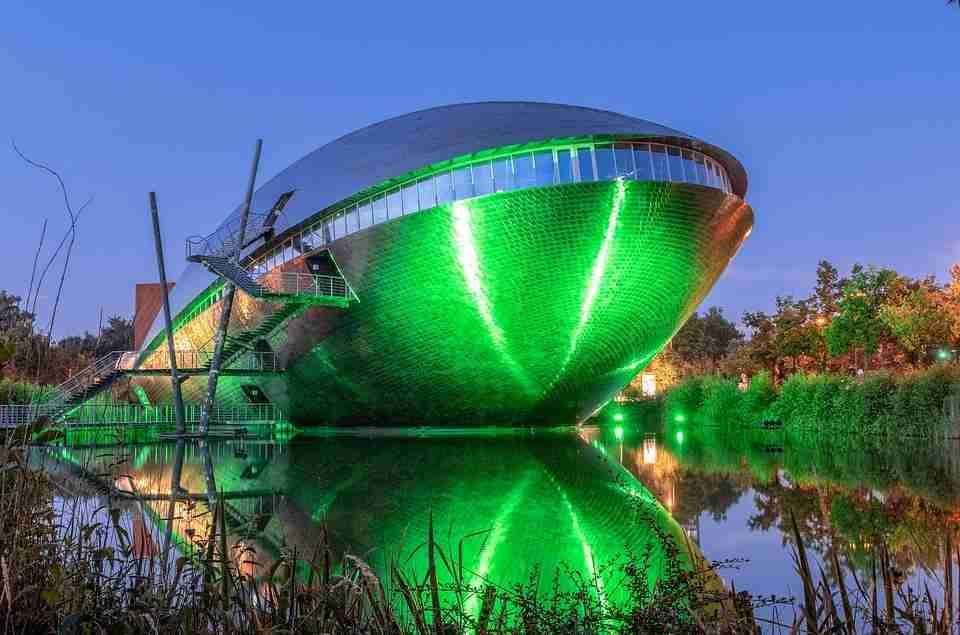 And last but not least, we went to Rhododendronpark, which is full of these gorgeous flowers called “rhododendrons”. 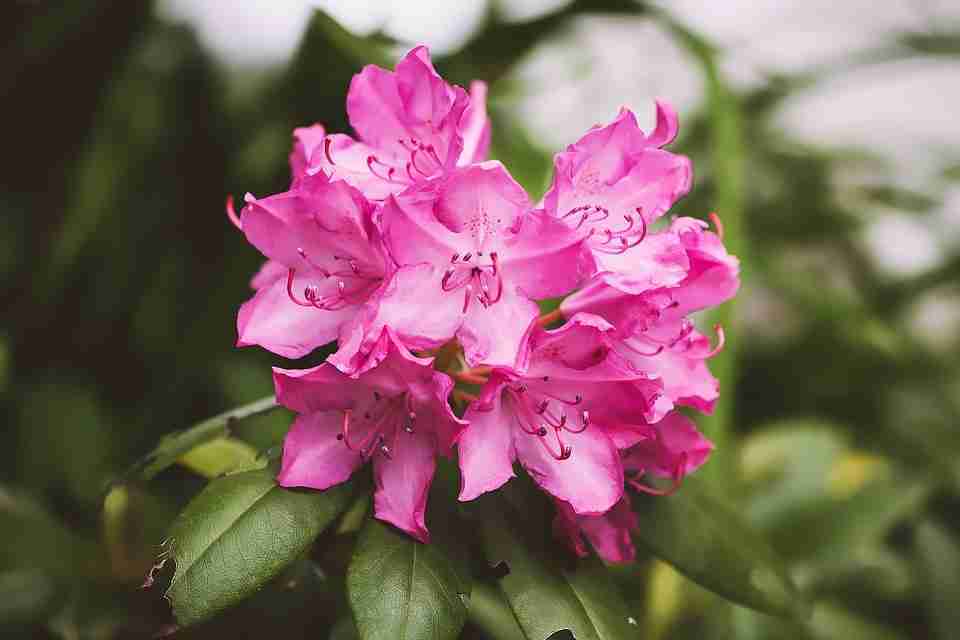 I’m not really a girly girl type of person (can you tell?), so my main reason for visiting this park wasn’t so much for the flowers as for the fact that it was a big-ass park and it was free. Worth every penny!

So there you have it. Bremen was a place off the beaten path and we would’ve never known about it or visited if it wasn’t for the fact that I had to book Hamburg on short notice and didn’t find any good deals. But we ended up spending a month there, chillaxing and writing our book, and had a blast! One of my favourite things about slow travel is that you don’t have to stress yourself out hitting all the popular big cities—you can find some hidden gems that turn out to be even better than your original destination. Oddly enough, we’ve found that we feel the most comfortable in European cities with populations of around 500,000 people. Just big enough to have things to do but not so big that it’s overwhelming.

Here’s how much we spent in Bremen:

What do you think of off-the-beaten-path places? Have you found any on your travels?