This is part 3 of our trip to the Galapagos. Click here for Part 1 and Part 2. 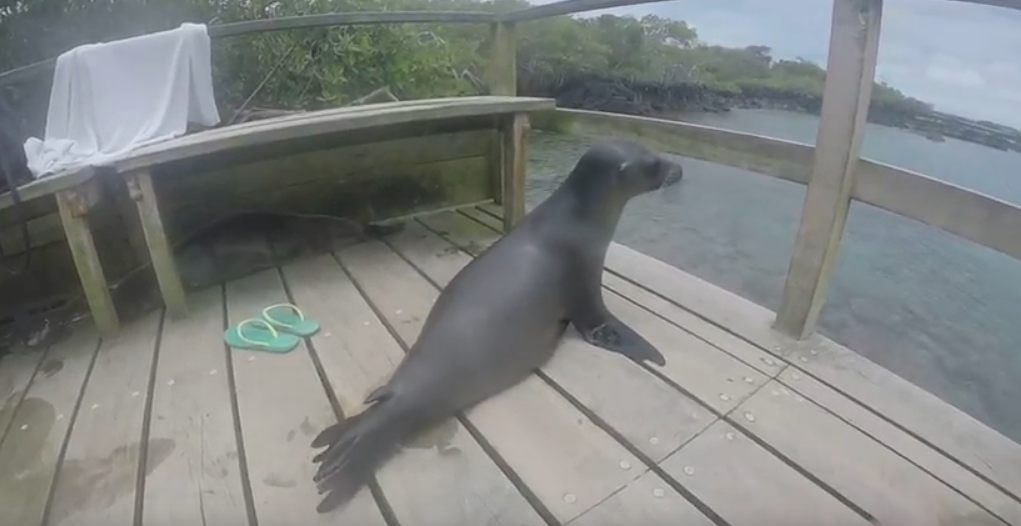 “Hey, aren’t you Wanderer and FIRECracker?”

Wanderer blinked in confusion as the stranger offered to shake his hand.

When you’re standing on a pier in the middle of the Pacific Ocean, waiting for a boat at 6:30am, the last thing you expect is to be recognized.

But that’s exactly what happened on our way to Isabela island in the Galapagos.

“I wanted to tell you how much I love your work! I’m a blog fan!” After chatting for a bit, we realized our reader was on vacation in the Galapagos from Vancouver.

“I gotta go catch my boat, but keep up the good work guys! Enjoy your time in Galapagos!”

I have to admit, this isn’t the first time we’ve met readers in the wild as a result of the blog, but it still gets me every time. Back when I was working my soul-sucking, stressful developer job, if you had told me complete strangers would be coming up to me in a few years, talking about how much they enjoy reading my insane ramblings on the internet, I would’ve told you to get your brain checked.

But here we were. I was still trying to wrap my brain around this whole thing while the boat captain started taking our tickets and directing us to the speedboat.

I got in and picked my seat—the one right at the middle, with just enough shade from the sun but still access to the fresh sea air.

“Okay guys, we’re going to Isabela island. Normally that should take 2.5 hours, but the seas are a bit rough today and it’s raining so it might take us a bit longer.” The captain said over the speaker.

“Wait”, the grey-haired man next to me asked. “This isn’t the actual boat we’re taking to Isabella, right? This is a boat to transfer us to a bigger catamaran or something?” 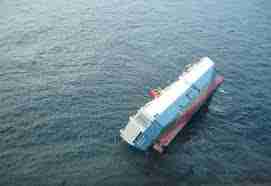 I’ll admit the small speed boat we were in didn’t look sturdy enough to brave the Pacific Ocean. But since I had already made a similar ferry trip from San Cristabol to Santa Cruz, I had to tell him the truth. “Afraid so.”

“Do you think it’s going to be rocky? I get seasick easily.” His eyes were full of panic.

I didn’t have the heart to tell him I’d prepared for this trip the way combat soldiers prepare for battle. The only thing I had eaten for breakfast was a Dramamine pill, I spent last night meticulously researching the least rocky place to sit on a boat, and I had a bullet proof plan of avoiding conversations and aggressively focusing on a spot in the horizon.

Before coming to the Galapagos, the Godfather of FI, JLCollins, had already warned me about exactly what to expect with their ferries, so I came prepared.

In his own words, here’s what he said:

“The boat was rocking so much, I kept worrying we were going to capsize.”

“Then 2 hours into the whole thing, it became so torturous, I though Oh God, PLEASE LET US CAPSIZE.”

So you can see how much I was looking forward to the ferry rides.

Luckily, the locals told me that seas were less rough in the morning, so I was feeling somewhat confident.

My salt-and-pepper-haired seatmate? Not so much.

“Buffet breakfast,” he said, his complexion quickly morphing from pink to white to green. “Bad idea.”

Turns out, his fear was completely founded, because when we pulled out of the port and headed for the open sea, our 15-people ferry turned into a rollercoaster.

I didn’t think it was possible for anyone to throw up for 3 hours straight, but my seatmate proved me wrong.

Leaning out the side of the boat, I gulped in as much fresh air as I could, desperate to avoid the smell of his half-digested breakfast now filling up the cabin. My eyes were glued to the horizon.

Half way into the trip, the skies opened up and drenched my shirt, pants, and socks, but I couldn’t care less. I had to use all my concentration to focus on not throwing up. The good news is that it kept me from worrying about the boat capsizing.

After what seemed like an entire century, we finally arrived on Isabella. 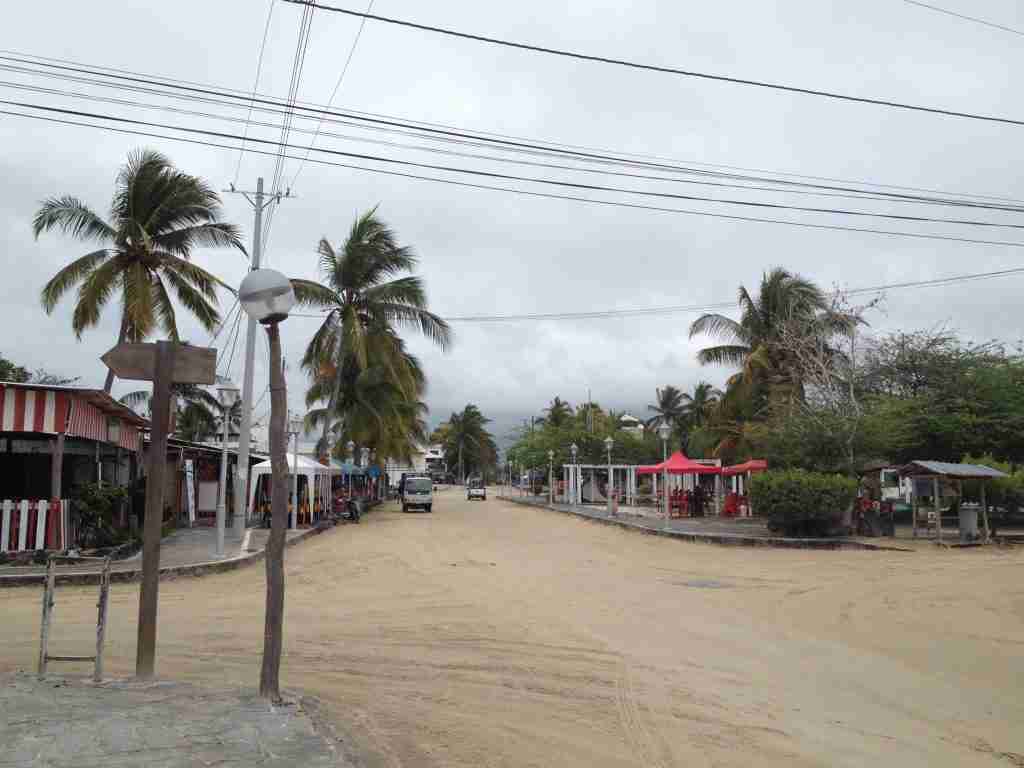 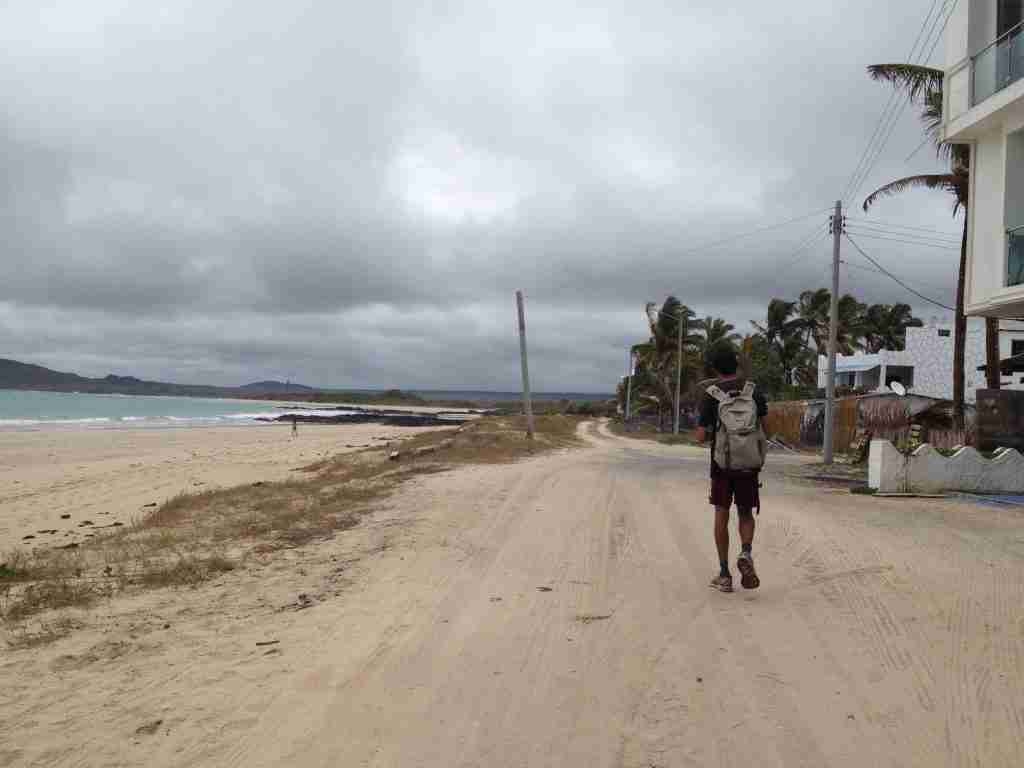 Salt and pepper hair guy crawled his way off the boat, cursing loudly and muttering something about finding a flight on the way back.

I was just glad we were on solid ground again and managed to kept myself from dry heaving. It also helped that on our way to eat lunch, we saw a baby shark, a stingray in the water, black lizards and seals all over the pier. My harrowing ferry ride was quickly forgotten and I enjoyed myself, exploring this new island.

Since Isabela was the least inhabited island we visited, it didn’t have a single ATM, unlike Santa Cruz and San Cristobal. But luckily, we had known about that before hand so we had taken out money the day before. We also found that there were enough free activities on the island that we didn’t really need to worry about running out of cash.

Our first stop as the turtle-breeding center. For travellers with kids, this was the prefect interactive place to learn all about Galapagos tortoises—from how big their eggs are, to how long they take to hatch, to all the predators that are now threatening their survival.

We even got to meet a batch of new turtles and watch them eat: 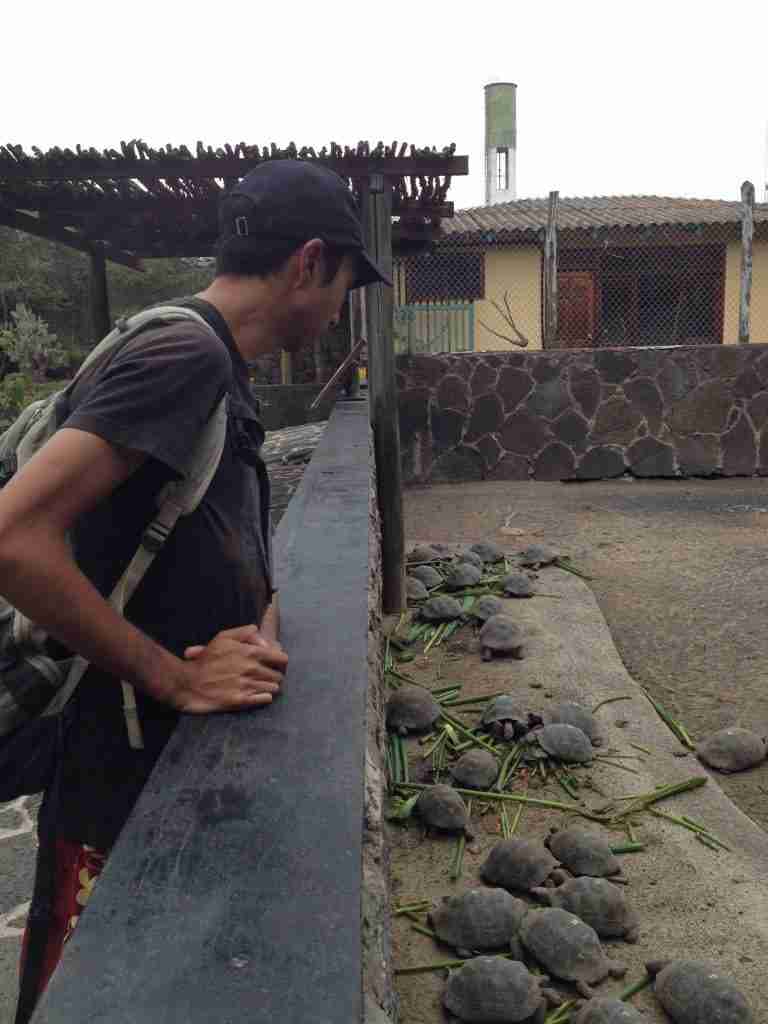 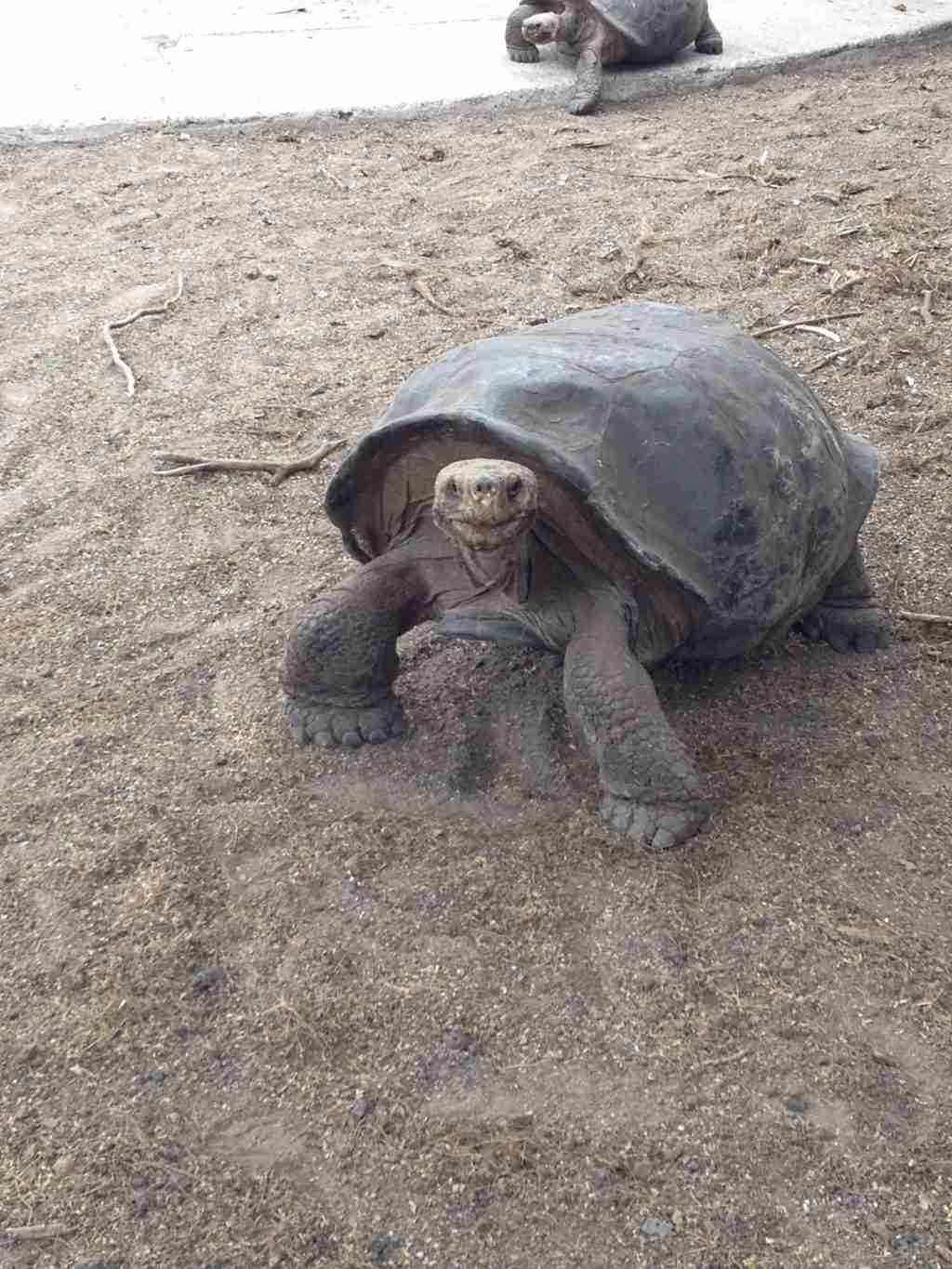 On the way back, we saw flamingos just hanging out and eating fish: 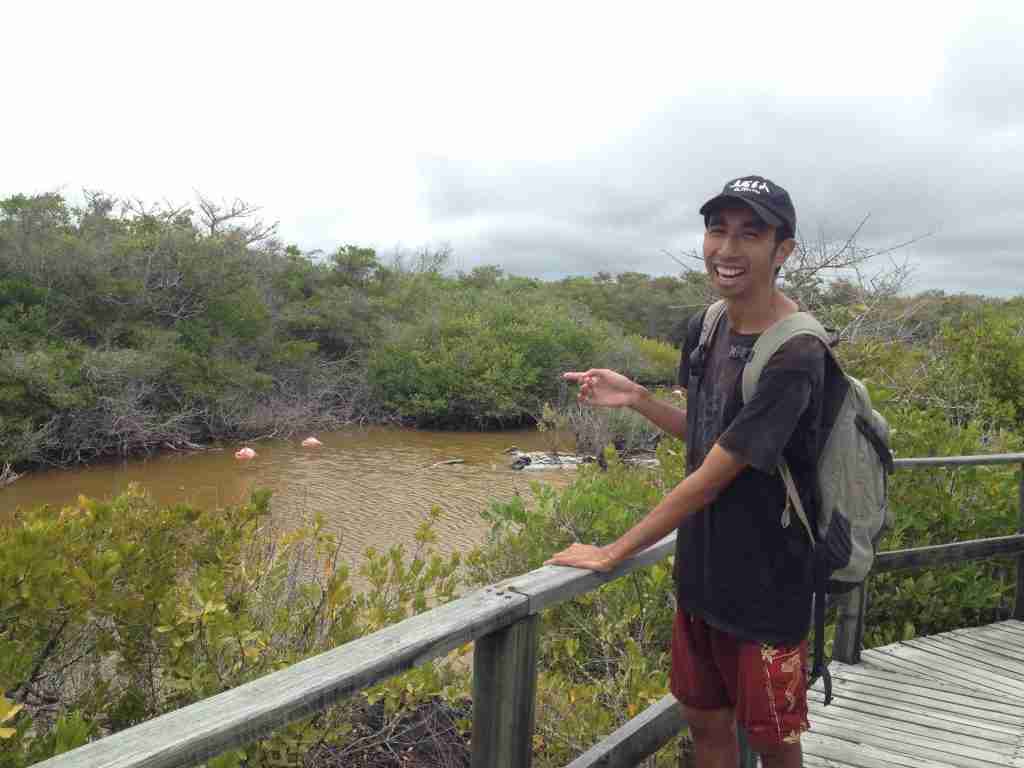 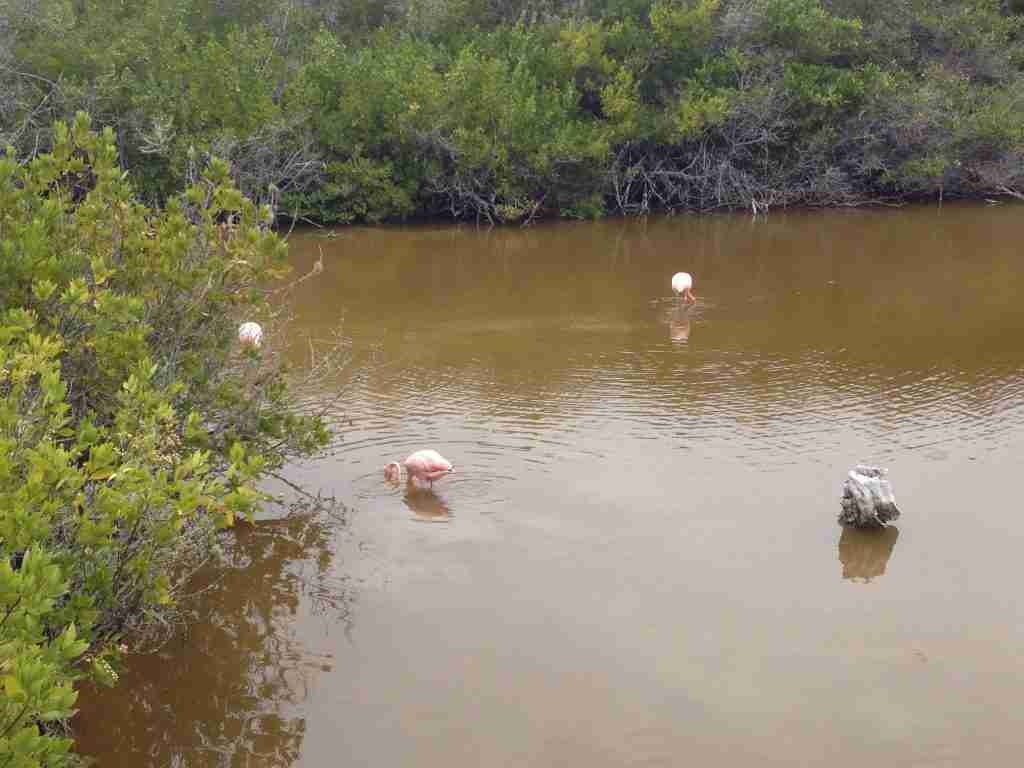 And then we spent the rest of our time snorkeling at Concha de Perla (“mother-of-pearl”) which is perfect swimming hole protected from the waves. At one point, Wanderer saw this adorable seal follow me.

Check out the video of the cute little fella here:

Some of the attractions on Isabella we didn’t have time for:

Unlike San Cristobal and Santa Cruz, Isabella requires a tour to visit some parts of the island. And since we were only there for the day, we mostly hung around the pier. If you want to experience hiking the volcano, snorkling, and seeing sharks, it’s better to stay there over night.

I’m glad we didn’t buy the day tour though, since we were less rushed than the people who were on it (they told me they ended up doing pretty much the same activities, which were all free anyway).

So if you do visit Isabella, either stay on the island (but remember to bring money with you since there are no ATMs) and explore it for a few days or do a day trip on your own.  Don’t bother with a packaged day tour.

Just remember, if you’re going to take the ferry, do the following things to avoid puking your guts out:

5) Pick a seat in the middle of the boat or near the back. The front is the rockiest (though you will be warmer and drier). The middle keeps you shaded from the sun and rain while still giving you access to fresh air.

Also, if you’re going to go on your own, buy the ferry tickets from Christine’s, which is between the grocery store and the church near the pier on Santa Cruz. 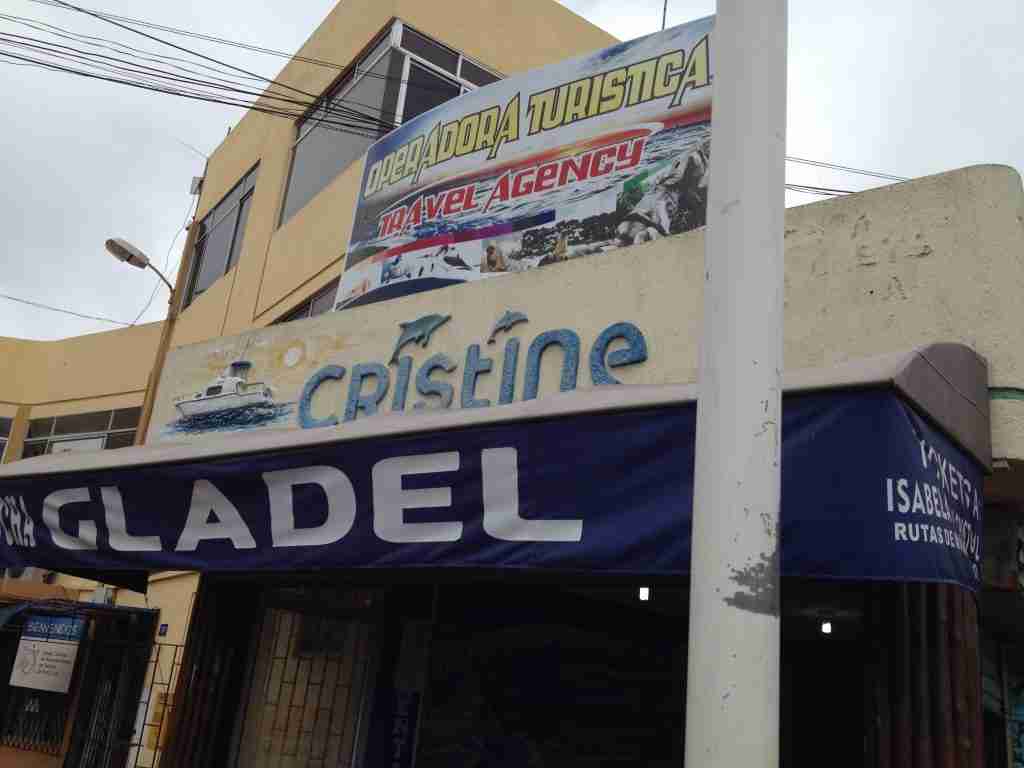 This is the only place on all of Santa Cruz where you can get ferry tickets to Isabela for $25 instead of $30, and it’s all the same boats so you’re not getting anything special from the other ferry companies.

Oh and if you’re going to buy a day tour to Isabela or ferry tickets, avoid Galapagos Dreams Adventures on Santa Cruz (located across from the fish market) like the plague! Horrible customer service and misleading information. If you ever run into any issues, expect them to blame you. It’s a long story, so I won’t get into it but they have the worst customer service.

Despite the somewhat traumatic ferry experience, I still enjoyed Isabella. If you’re lucky, you’ll even get to see penguins.

If you like less inhabited islands with lots of hiking, animals, seclusion and don’t mind not having access to an ATM, Isabella is the island for you. It’s worth the $30 ferry ride (each way) and $10 tax on arrival. Just make sure you eat a light breakfast and bring seasickness meds.

Here’s how much we spent for the day on Isabela.

And here’s how much we spent on average over 9 days in the Galapagos.

So what do you think? Would you go to the Galapagos? Are you brave enough for the ferry (and the price tag)?