It took us 19 hours of flying, 8 hours of layover, 4 flights, and a Hell of a lot of turbulence to get to the Galapagos. So when I stepped off that plane, exhausted and cranky, I thought “this better be worth it”.

Half an hour later, after dropping off all our stuff, we took a short walk from our AirBnb on San Cristobal to the beach. The second our feet hit the soft, golden sand, Wanderer pointed excitedly towards the rocks near the water. “Whoa, I think I see a sea lion hiding behind that rock!”

I laughed, took him by the shoulders and spun him around to face the other side of the beach.

The entire area was carpeted with sea lions. 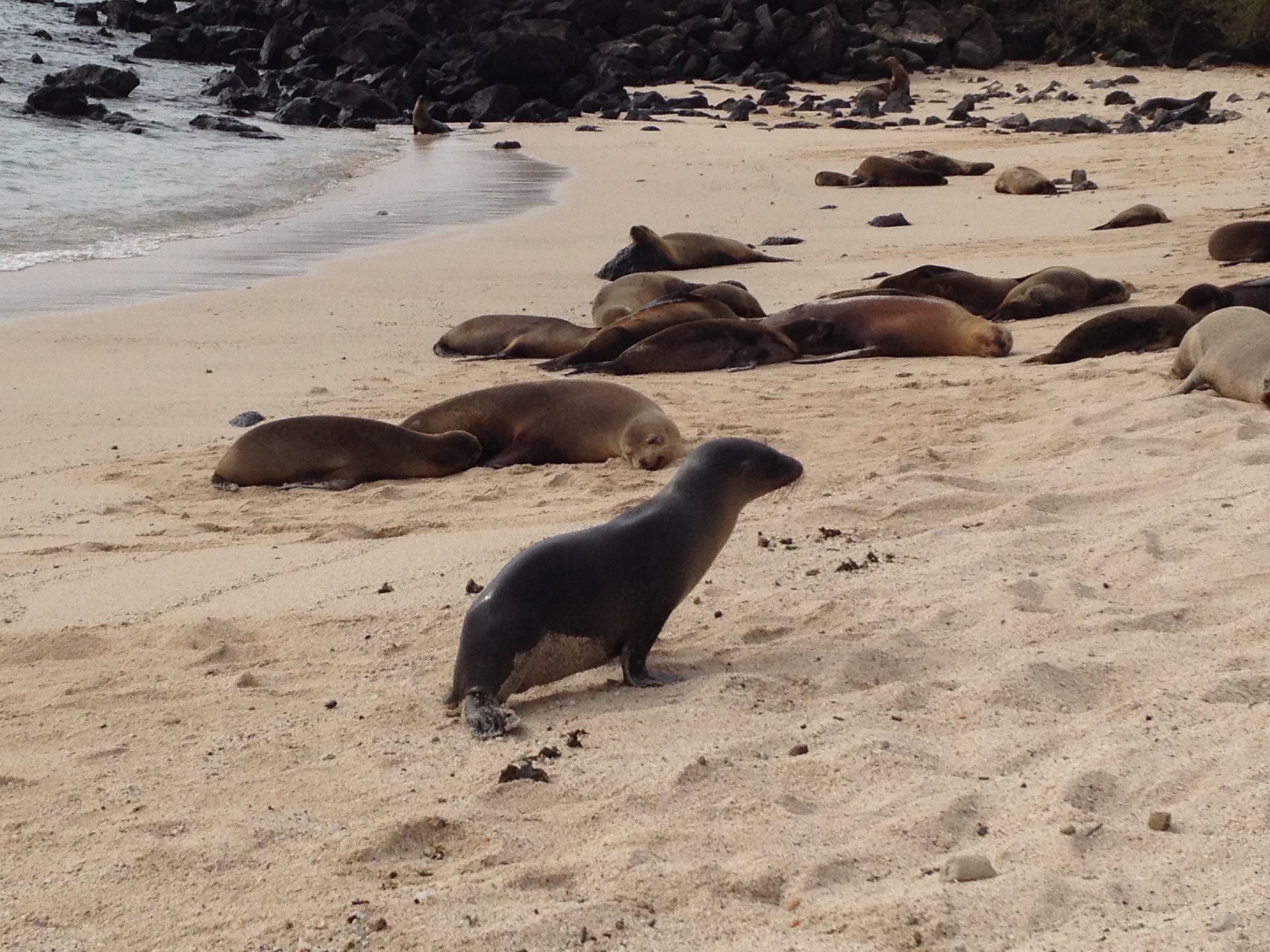 Some were sleeping, others waddling around, one very annoying dude was posing obnoxiously and barking at everyone.

I got really excited when one sea lion (whom I later named “Favourite”) winked at me. 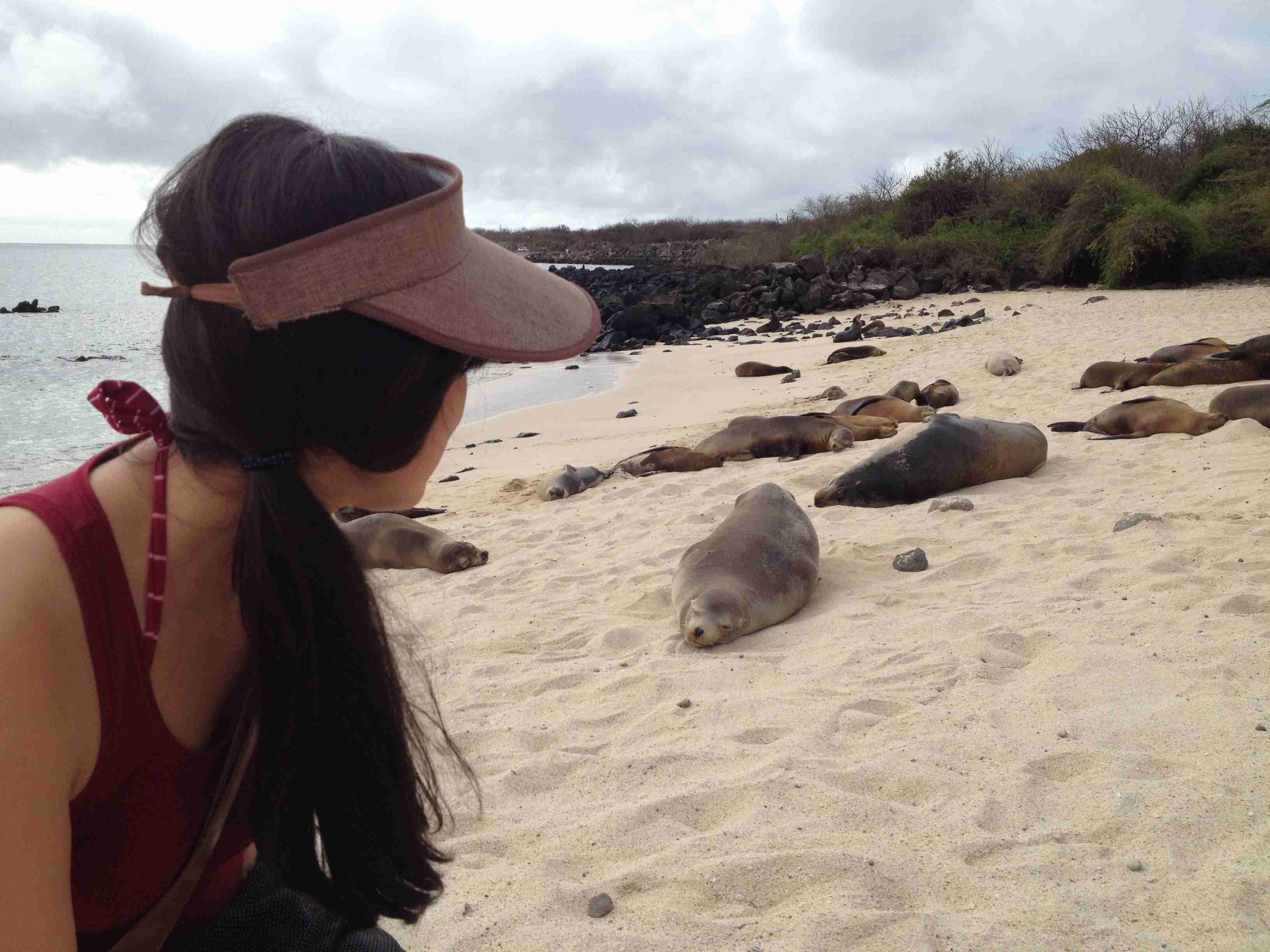 All the hassels of flying and expenses of getting here immediately evaporated on that beach, and amongst a gaggle of sea lions, I felt very at home.

Little did I know, that was just the tip of iceberg in terms of our animal encounters in the Galapagos.

Before we came to Galapagos, one of the biggest draws (according to the guide books and others who came before) is that Galapagos is so remote and hard to get to the animals on the island have never really experienced predators. As a result, they never developed an evolutionary fear of people. This means they’ll come right up to you and interact with you in ways you don’t expected.

Like with the sea lions, for example. The Ecuadorians call them “sea dogs” for a reason. I could be sitting on a bench, enjoying a tuna sandwich, and one will playfully waddle up next to me, and bark at me to give him my sandwich. 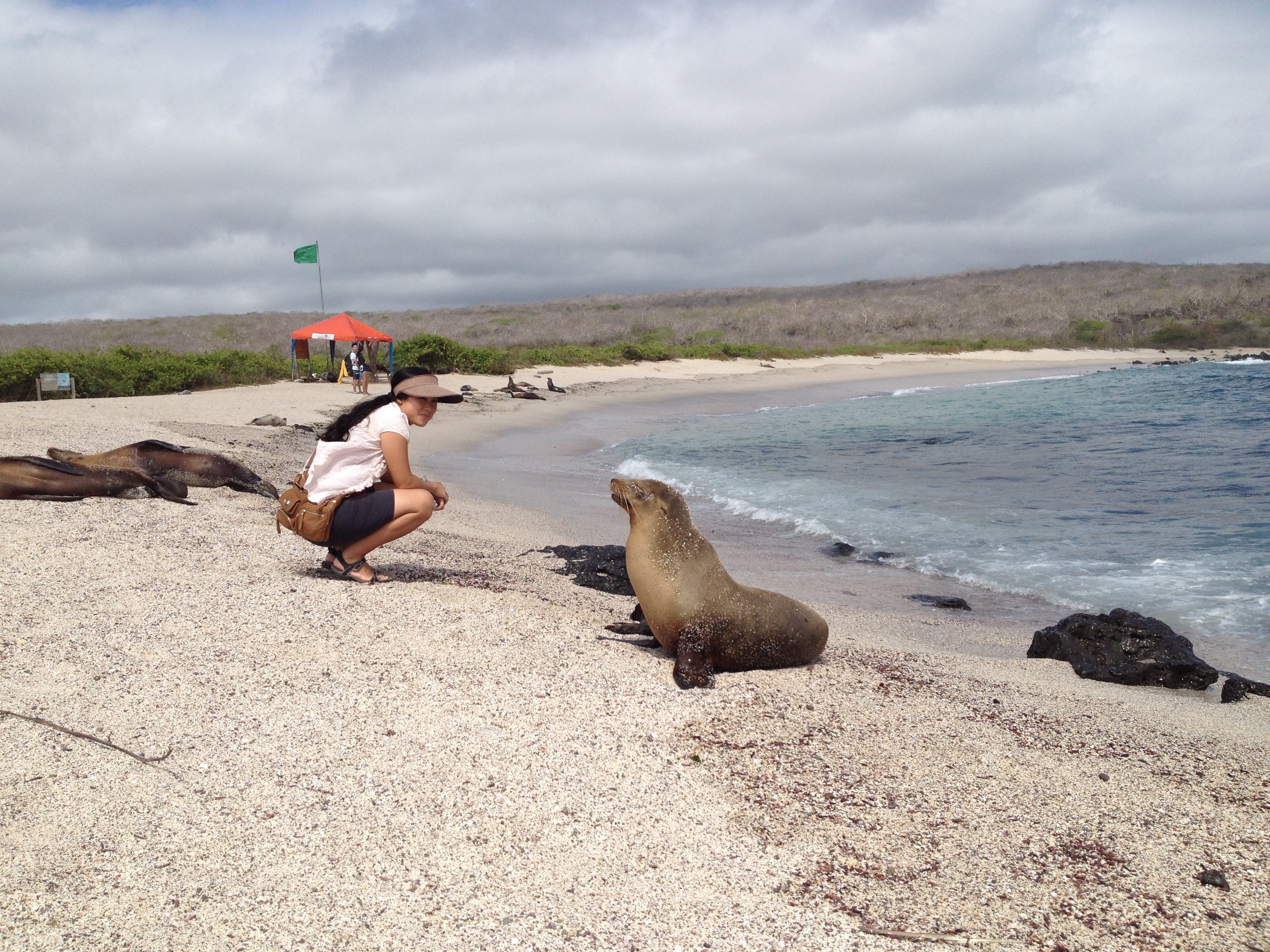 Another thing I discovered about sea lions is that even though they are slow and clumsy on land, in the water, they’re torpedoes. And if you go snorkling with them? They have a tendency to sense your nervousness, dive under, flip around, dart right up to your face and then scream. And while you’re putting your heart back into your chest, they’re already far away, having a good laugh at your expense.

But by far, our best interaction with sea lions happened on a remote beach, which took a harrowing one-hour hike to get to.

I say, harrowing, because on this hike, I scratched up my thigh, slid down a mountain path, scraped up my hand,  bruised my hip, and then got lost and walked into a cactus forest, where I nearly fell on a cactus. Good times!

And then when we got to the beach, one of them tried to steal our shit. Wanderer captured the entire encounter on camera.

So after that whole interaction, I decided I wanted to get to know even more Galapagos sea animals, and signed up for a dive at kicker rock, one of the popular spots to see sharks!

The water was freezing, and we had to wear 3-5 inch thick wetsuits, but it was one of the most memorable dives because we got to see a sea turtle, stingray, seal lion (who playfully pulled the wetsuit of one of the other divers to get him to play with it), several sharks, and tons of fish.

Before going in the water, I let our Dive Master know I had a massive gash on my thigh (from the harrowing hike) and asked whether it’s okay to go in the water with sharks. He smiled and say “yeah, no problem!” And it turns out, he was right, because not only was the shark not interested in feasting on my blood, it actually swam across an entire school of fish, without eating a single one. When I asked the captain about this, he said because of the strict fishing and preservation laws in the Galapagos, the sharks are well fed and don’t need to eat fish all the time. “Wow,” I thought. “The shark understands the concept of ‘enough’. Even their sharks are FI!”

After the diving with sharks, the next day we walked to “La loberia” beach, where we found more sea lions and big, fat, lazy lizards sun tanning on the rocks. 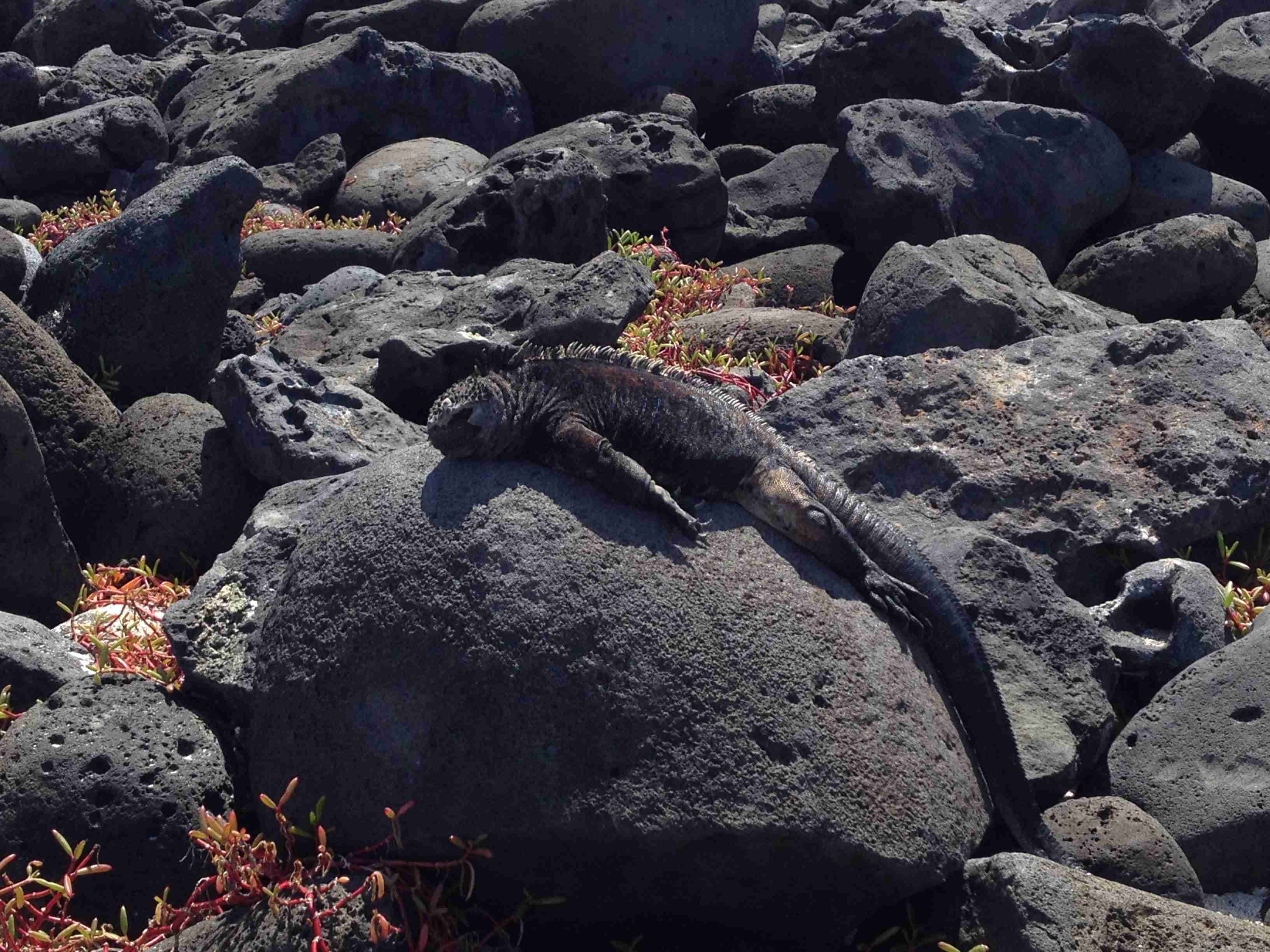 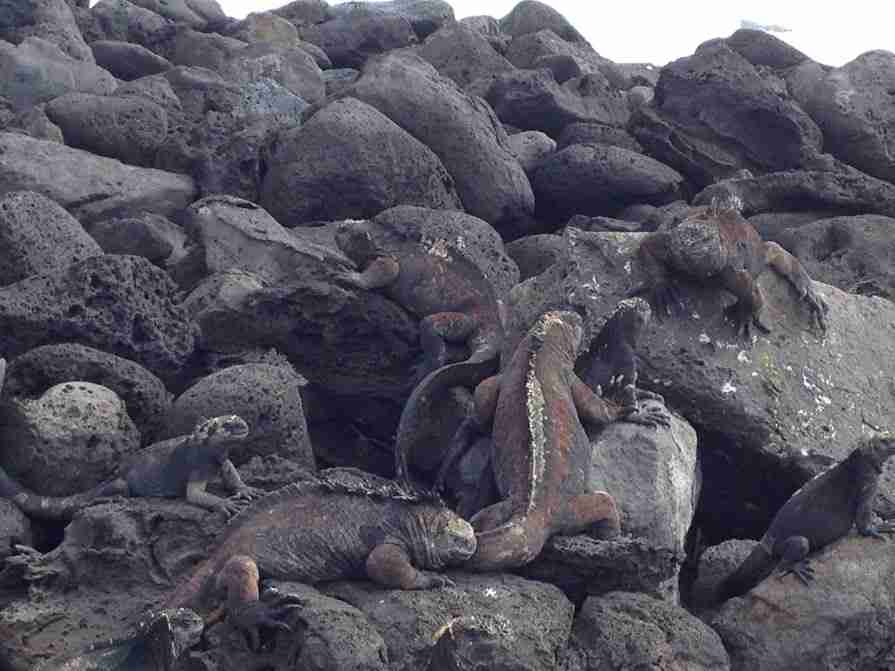 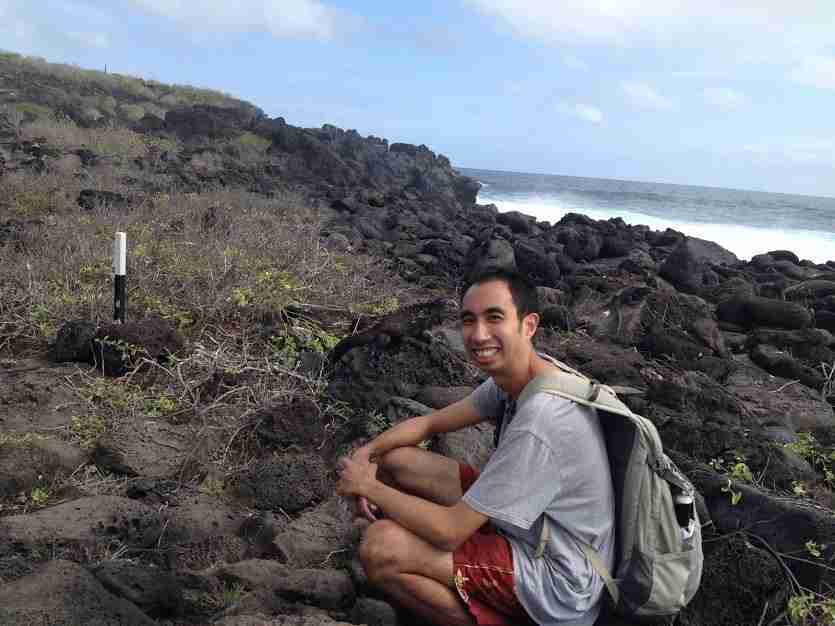 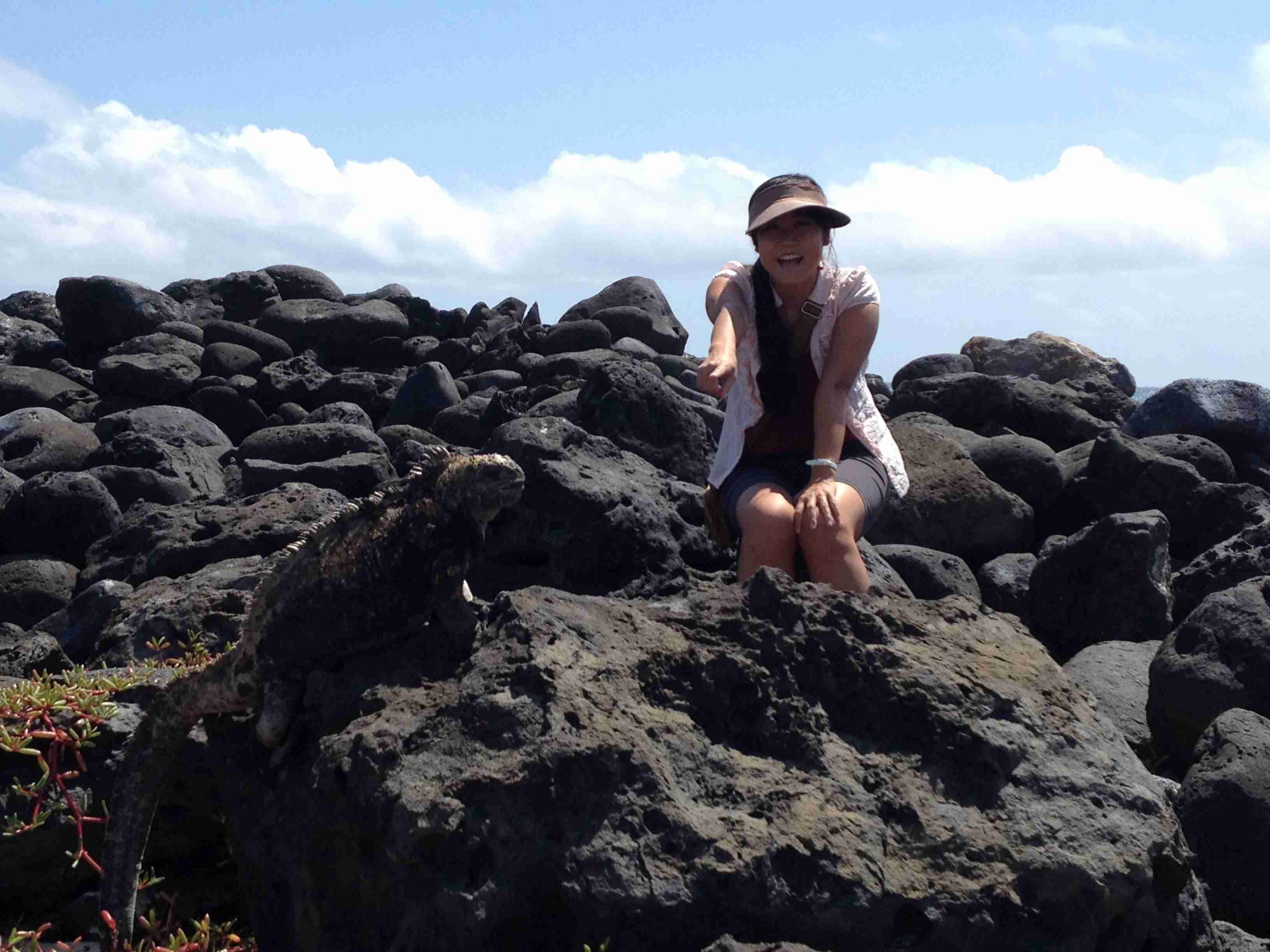 And so that’s how I spent the rest of the day, lying lazily on the rocks and learning from Galapagoan lizards the best chillaxing pose for retirement.

With the extra costs of flying to the islands from Quito ($200 USD each person each way—buy it on the Ecuadorian website to avoid the currency conversion costs), the park conservation fee to get in ($100 USD each + $20 USD for visitor’s card), just getting to Galapagos proved to be pretty expensive. But since we didn’t do an overpriced cruise (which is how most tourists experience the Galapagos), we ended up doing it for half or a third of the normal cost. The good news is, if you decide to explore Galapagos on your own, there are lots of deals to be had by staying in AirBnbs ($50USD – $70USD/night) and eating at the food court in the Mercado Municipal ($4 USD a meal that includes main, soup and drink).

Here’s how much we spent on San Cristobal island, in the Galapagos:

Despite it being one of the most expensive places we visited, I fell in love with Galapagos. It’s not a place you’d move to, but a once-in-a-life-time experience. Plus, there’s also this crazy thing that happened when a reader recognized me in in the middle of ocean at 6 in the morning, but that’s for another post.

For the new readers joining us, this post is part of a series called “Let’s Go Exploring!” where I write about our adventures travelling the world and living nomadically on $40K/year. You can read the rest of the series here.