Let’s Go Exploring! Merida and Cuzama: Cenotes, Where Have You Been All My Life?

This post was supposed to be about one of my favourite countries in the world, second only to Thailand (hint: it has lots of robots), but since a few readers asked about Central/South America, I’m going to fast forward this week just to give you a taste…

***
After going back home to visit family for Christmas, we wondered where we should go next.

It was tempting to go back to Asia, but since we had a busy year ahead of us (going to conferences, speaking at the Chautaquas, and attending my best friend’s wedding) keeping us in (or near) North America, we figured why not explore Central and South America? That way, we’re only need a short flight of 4-6 hours instead of 15-20 hours to get back.

Plus, we already knew our favourite places in Asia. Maybe we can find the equivalent in Central/South America.

Question was, where should we go first?

Knowing that we couldn’t blend in as well as we did in Asia and our inexperience with the region, we knew we had to pick carefully. We needed a place that could ease us into the region.

If it wasn’t for GoCurryCracker and RootofGood talking my ear off about this magical place I would’ve dismissed it completely.

When I met GoCurryCracker in Chiang Mai, Thailand, he scoffed at my excited girlish squeals about Chiang Mai being the best place in the world. “No way. There are WAY better places.”

“Really?” I asked, arms crossed. “Where else can you live like a queen for $30 a day while pigging out everyday?”

“You’ve never been to Mexico, have you?”

“Mexico?” It was hard to keep the scepticism out of my voice. “Really?”

While I scarfed down my shrimp Pad Thai, GoCurryCracker regaled me with all the wonders of Mexico: the scrumptious pastries, the melt-in-your-mouth tacos, the friendly people, and the ridiculously good prices.

Later on, when I asked RootofGood about Mexico, I got the same glowing review. In fact, he bombarded me with so many messages fanboying about Mexico that my Facebook Messenger crashed.

I knew if we didn’t go, RootofGood might just drag us there himself and stuff us full of tacos. So it was settled. We were going to Mexico.

Naturally since I’d never been to Mexico before, not even on vacation (I had written it off as “too dangerous and not exotic enough”), I decided to search on Nomad List for the best town to visit.

The city that met the most of my criteria (safe, warm, cheap, fast wifi, walkable) turned out to be:

With a population of 800,000, it was big enough to have things for us to do, but not overwhelmingly crowded.   And as I researched more about it, I realized that not only was it known as “the safest city in all of Mexico”, it was on par with cities in Europe in terms of safety.

And how much did all this sunshine and serenity cost? $530/month for a room and private bath with pool on Airbnb! And we didn’t even have to use up our points since the flight to Mexico was only $238CAD/person!

But as soon as we mentioned Mexico to our friends and family, their immediate reaction was “Mexico? Are you nuts? Don’t you like being alive?”

This was the same reaction we got when we went to Thailand, so we just shrugged it off. People who don’t travel and get all their news from scary headlines will always tell you “everywhere is dangerous, just stay home”.

Their loss. Our gain.

We flew out that afternoon and went from this: 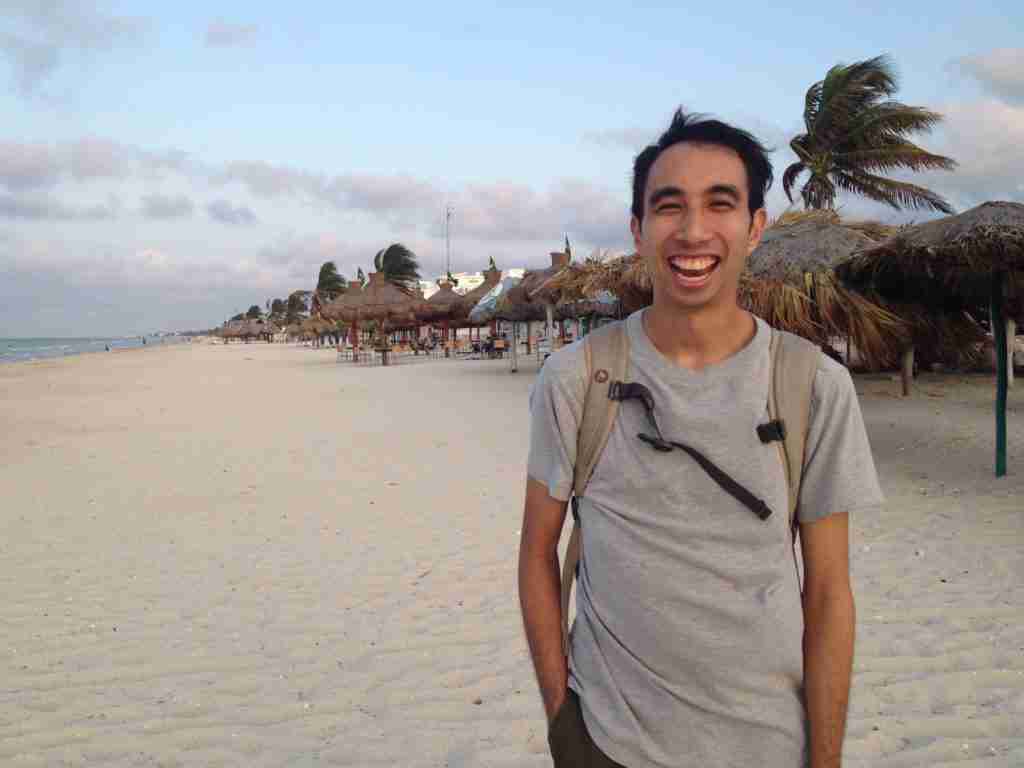 As it turns out, not only was Merida not dangerous, we often saw families out strolling at night with their kids and old ladies going for a jog in the dark. In fact, we felt safer in Merida than we did in Toronto.

After our first week in Mexico, we realized that some basic Spanish helps a lot.

In Thailand, most cities are so used to tourists and expats that English signs are everywhere and all menus have photos with English clearly written on them. You can pretty much turn off your brain and the Thais will bend over backwards to make things easy for you.

But in Mexico, unless you’re in a touristy place like Cancun, you really have to TRY to speak the language. So of course, having been educated through the Canadian system, our high-school French was completely useless.

She gave us a confused stare. “Cuanto Cuesta?”

“Uhhhh..si?” Wanderer responded, realizing he just asked her “How cheese?” instead of “How much?”

I rolled my eyes at him, handed her the cash, took the tacos, and then confidently responded “Gracias! Buenas NACHOS!”

Luckily over the week, with the help of Google Translator and Duolingo, we learned how to order food, ride the bus, and ask for directions in Spanish.

But we were still nowhere near conversational, so luckily our AirBnB host, a Belgian expat who spoke French, English, and Spanish, helped us out.

Not only did he helped us find an English speaking doctor and dentist (who were top-notch and only cost us $35CAD for check-up and cleaning), he also introduced us to one of our favourite things in Mexico:

If you like waterfalls, caves, and crystal clear water, Cenotes are basically all those things all rolled into one.

Because the soil in the Yucatan province is so porous, in the areas where the ground has collapsed an underground river is exposed, revealing a sinkhole you can swim in.

And less than two hours outside Merida is the tiny town of Cuzama, where for a measly 350 pesos ($23 CAD for up to 4 people), you can go on a horse-drawn cart adventure through the forest to visit 3 cenotes. 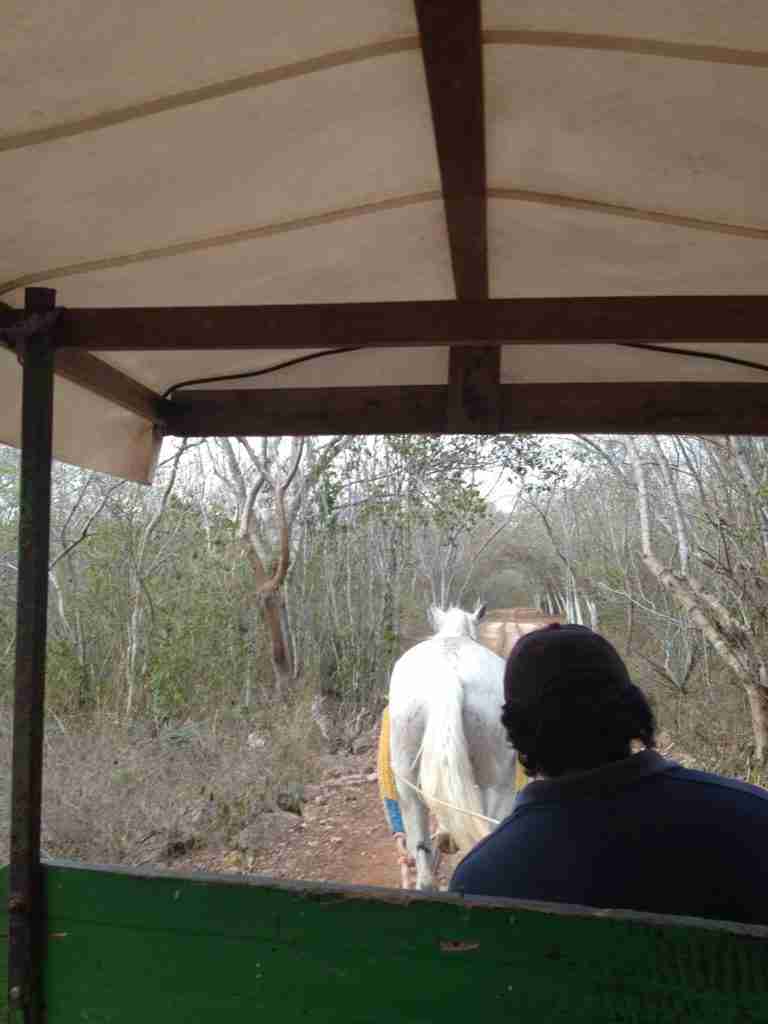 The best which is saved for last: 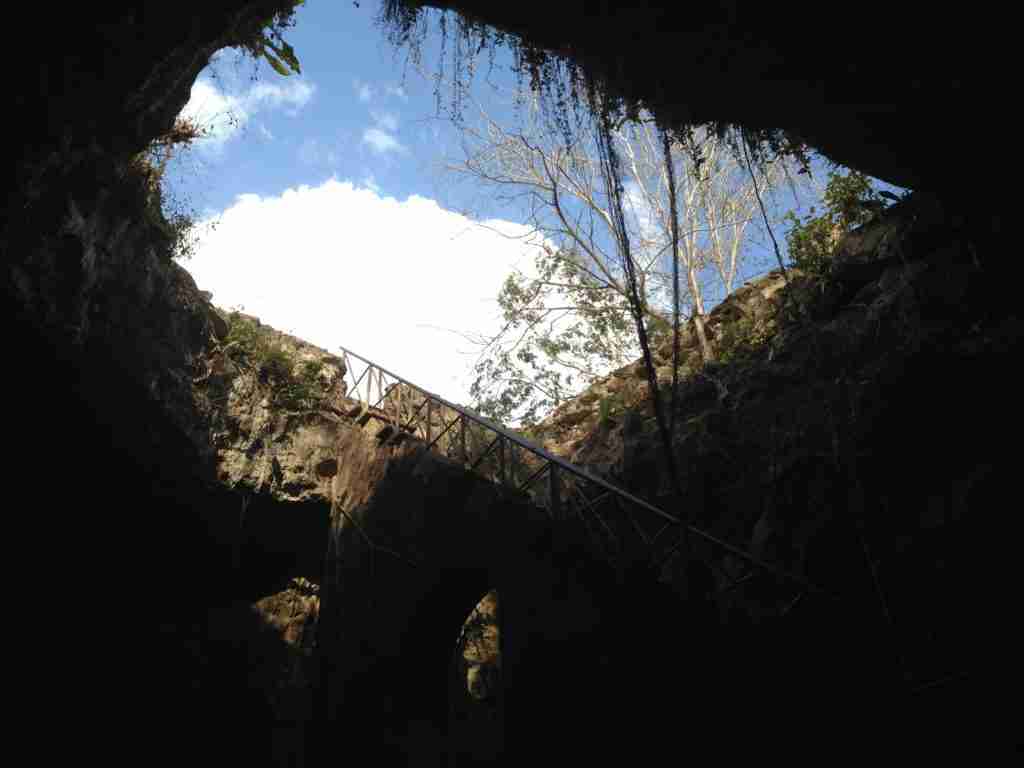 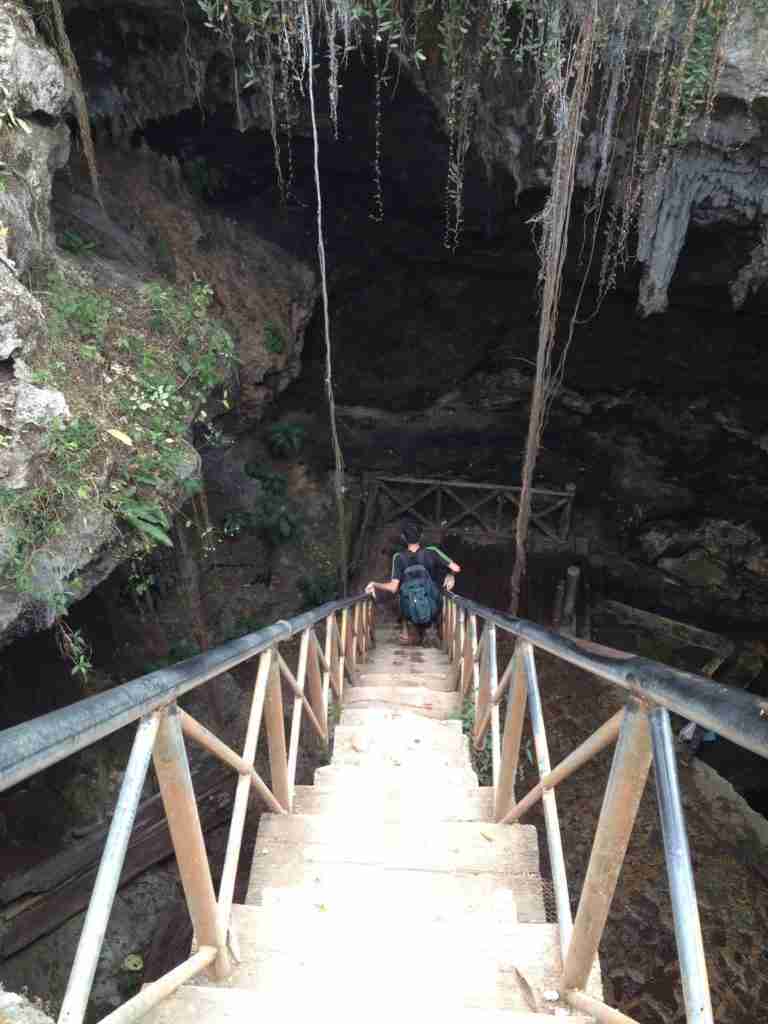 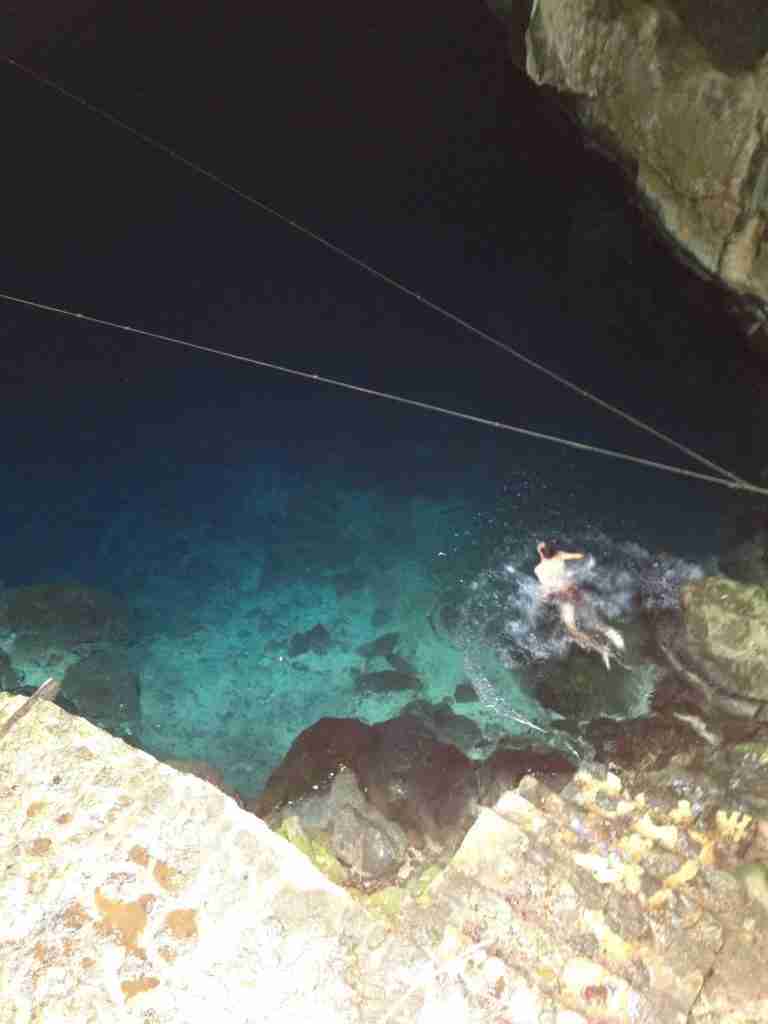 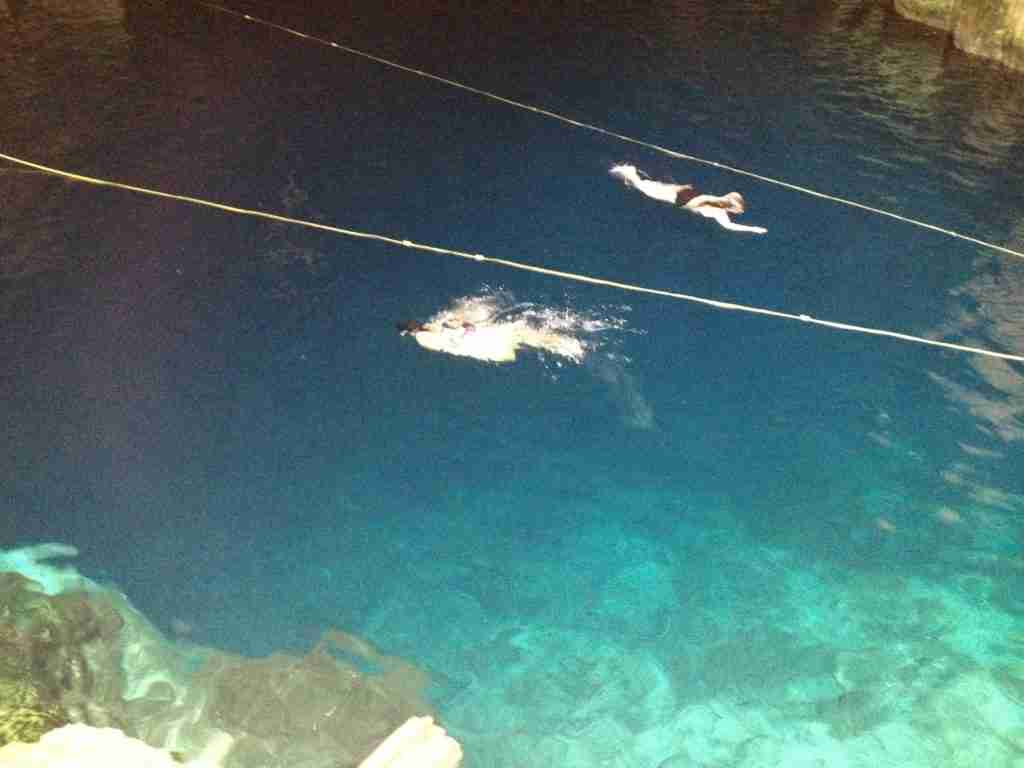 The water is this perfect shade of aqua and so clear you can see straight to the bottom.  And unlike the beach, it’s fresh water so you don’t need to rinse the salt out of your hair afterwards.

Once I swam in a Cenote for the first time I was hooked. We made a plan to visit as many Cenotes as we could going forward.

So how much did we end up spending in Merida, Mexico?

Food costs ended up being the same as South East Asia…but only because I cooked for dinner. Street food consisted mostly of tacos, corn on the cob, hot dogs and hamburgers, so I started cooking to add variety (spoiler alert: later I found out the lack of street food variety was more of a Merida thing and it got better in Mexico city).  I also noticed I gained 5lbs pretty quickly from eating tacos and tortas (huge ass sandwiches) so I started stuffing myself with as much fruit as possible. Luckily, fruit was fresh and plentiful, with mangos costing only 25 cents to 50 cents each and papayas only $1 or $2 each.

All other costs were comparable with South East Asia. Getting around was especially cheap and easy via the ADO bus.

After spending some time in Merida, we realized that Mexico could actually be a pretty good alternative to South East Asia…especially if we need to be close to family in the future. It’s also nice that you’re allowed to stay in Mexico for 6 months at a time without a Visa.