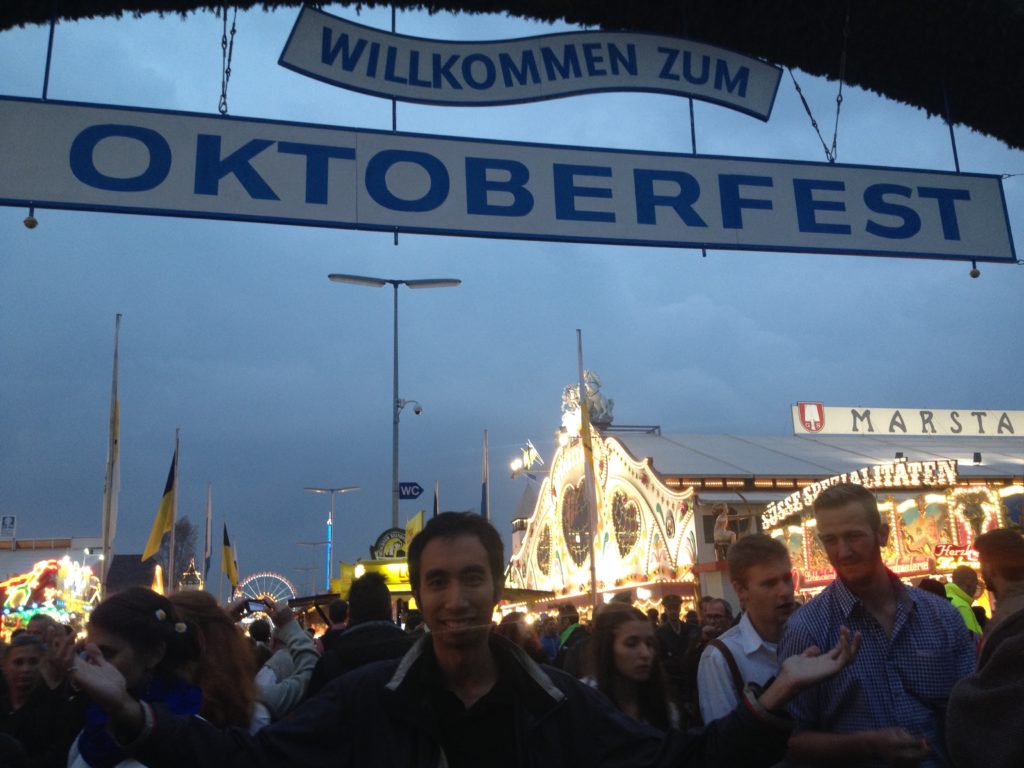 You know that point in the party where you’re just drinking with some friends and then WHAM you’re getting groped by some random guy?

Well, that’s the type of party Oktoberfest is.

We were sitting next to some middle-aged dude, who had been drinking long before we got there. His wife kept coming around with his daughters to angrily remind him that he had a family and could he stop drinking so they could finally go home.

If you’ve never been to Oktoberfest, there is absolutely NO WAY to prepare for it. 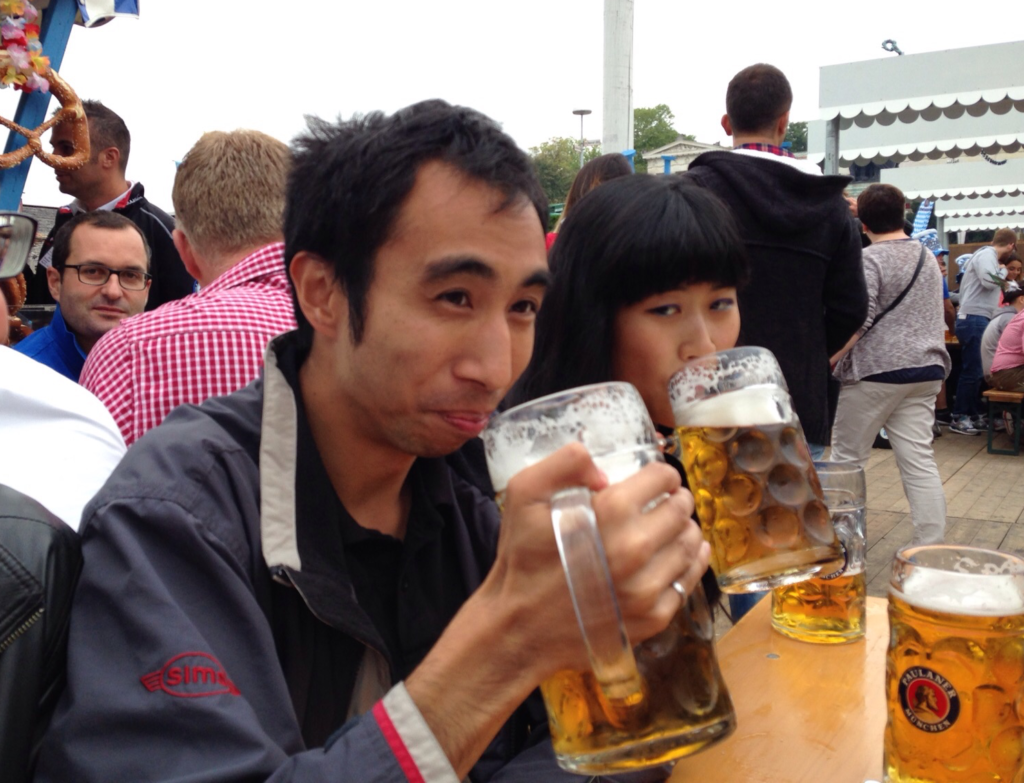 This isn’t just a bunch of beer tents and people getting drunk. This is an entire amusement park built around it! Complete with full-sized roller coasters, carousels, and ferris wheels!

Cause, you know. Fast, nausea-inducing G-forces is clearly the appropriate palette cleanser after an entire day of drinking.

That’s the only German we know, but BOY did we get our mileage out of that phrase that day.

Incidentally, MAN can Germans drink. I thought Wanderer could pound them back but these guys take alcoholism to a whole new art form. Between the two of us, we managed to finish only 3 STEINS (6 pints). And this was spread over 8 hours of drinking!

Our German friend Jerg had 12! 12 STEINS. And he was completely coherent the entire time too! How is that even possible?!?

Somehow, I managed not to have a killer hangover the next day, and dragged Wanderer up a mountain to see the inspiration for “Disney’s Cinderella castle”: 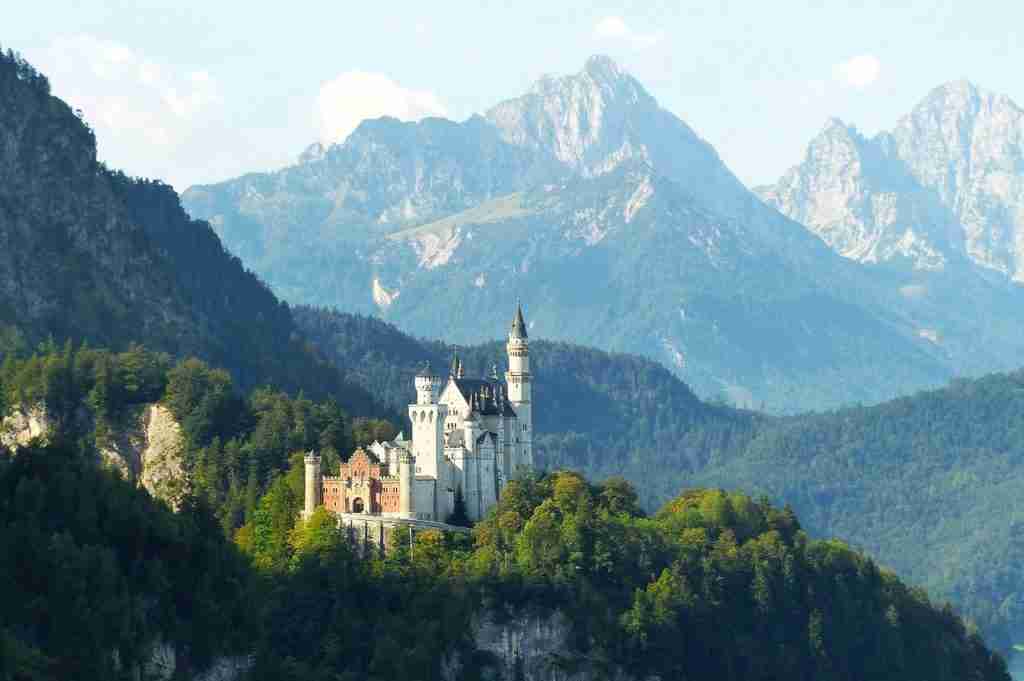 I’m not sure if it was a coincidence or not, but driving up to the castle, we could see a thick soup of fog surrounding it, all mystical looking, making the castle like it floated straight out of a fairytale. 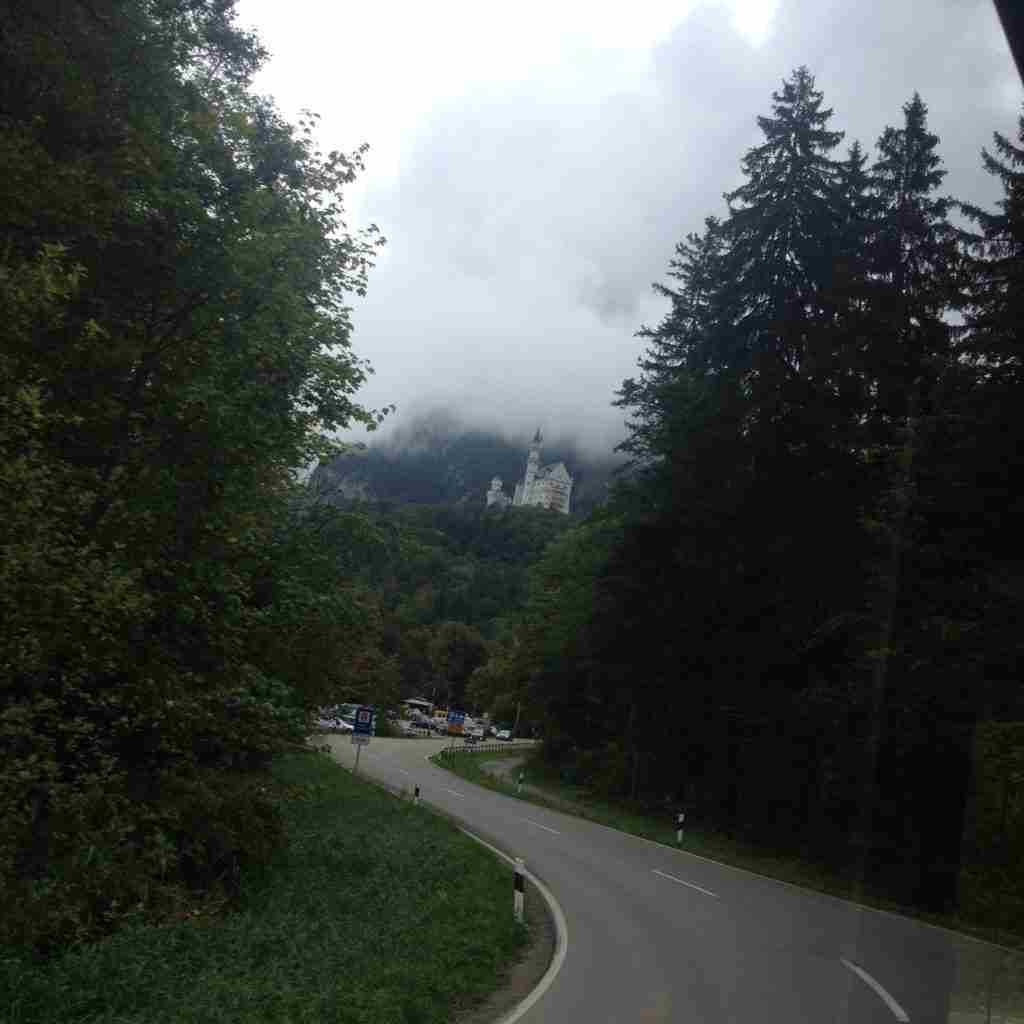 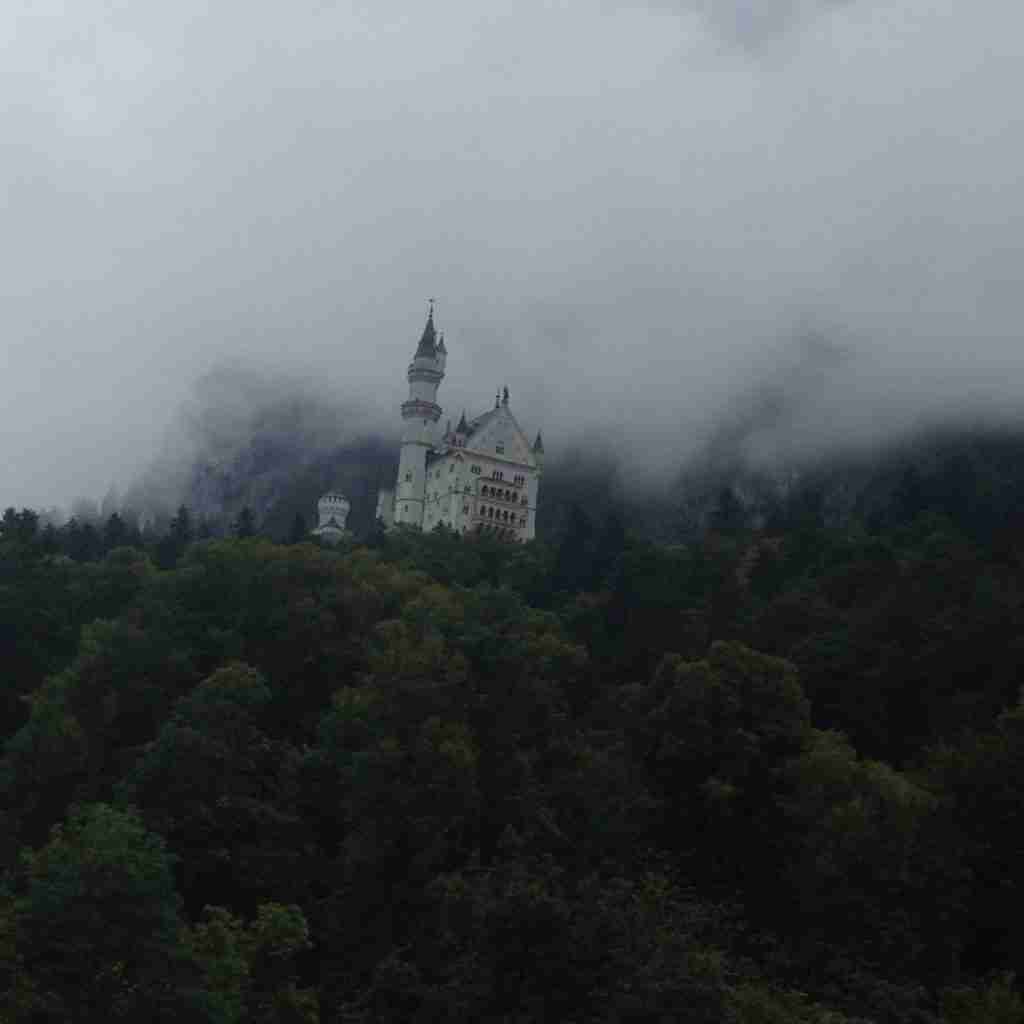 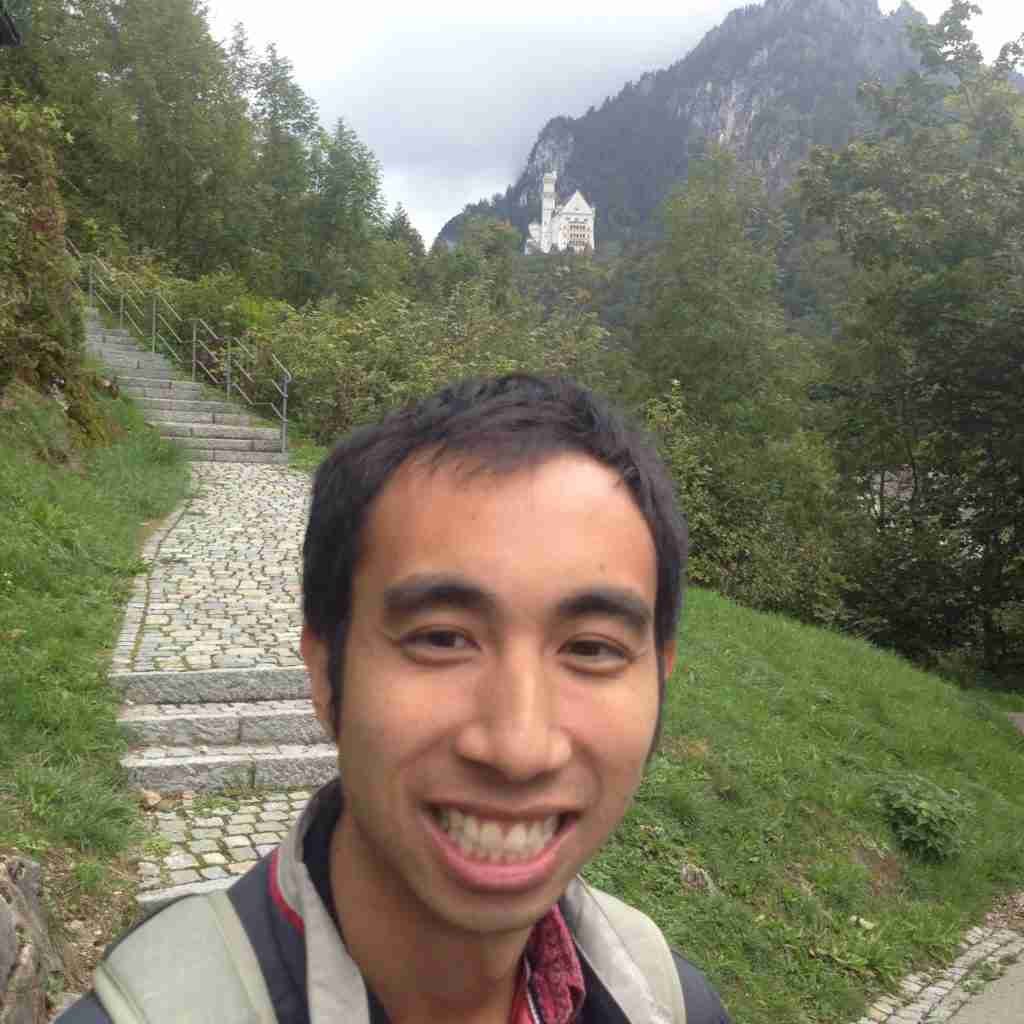 And just as I suspected, hordes and hordes of tourists crowded the entrance. I was scratching my head wondering how the heck we’d ever be able to get in, until I remember, wait, this is Germany we’re talking about. Of course the trips are going to be organized with ruthless German efficiency. And I was quickly proven right when the guides told us we could purchase a guided tour without lining up, and that our ticket would show up on the airport-style electronic bulletin board when it was our time to go. Ah, Germans.

Most of the tours were already full, but luckily, we managed to nab the 2nd last one. So if you ever go to visit Neuschwanstein make sure you get there super early.

Normally, I prefer going off on our own, but I could see in this case, without the organized tours, there’s no way anyone would see anything.

And the tour proved to be well worth the price, as the backstory of Ludwig II of Bavaria, was pretty bizarre and interesting. 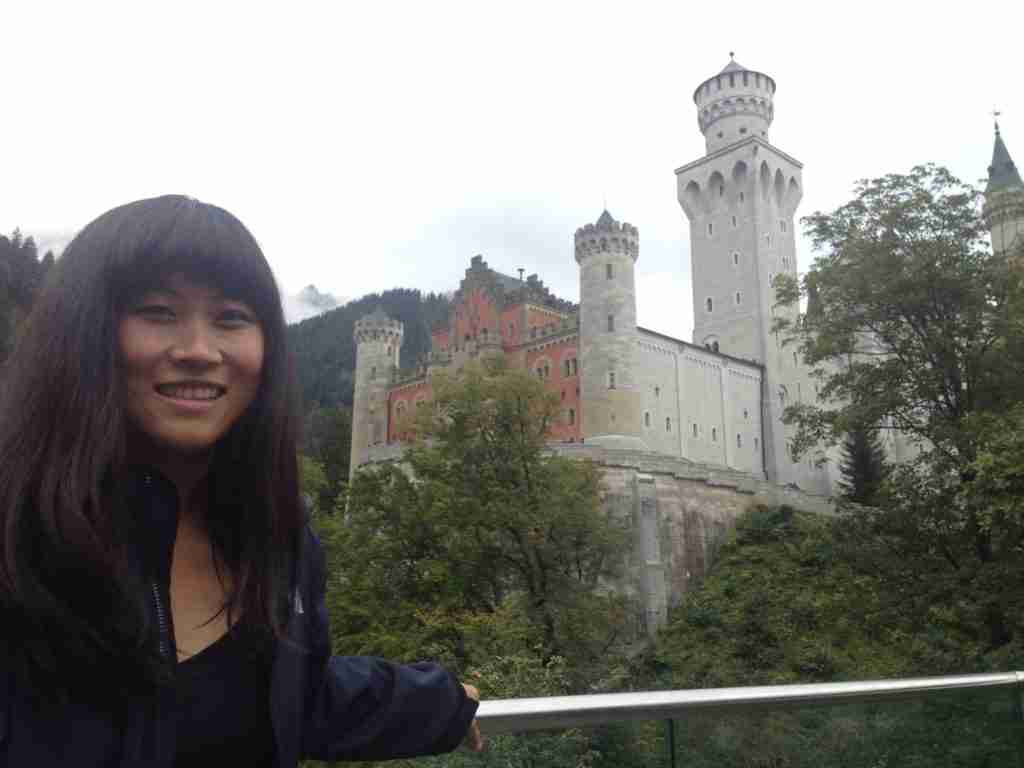 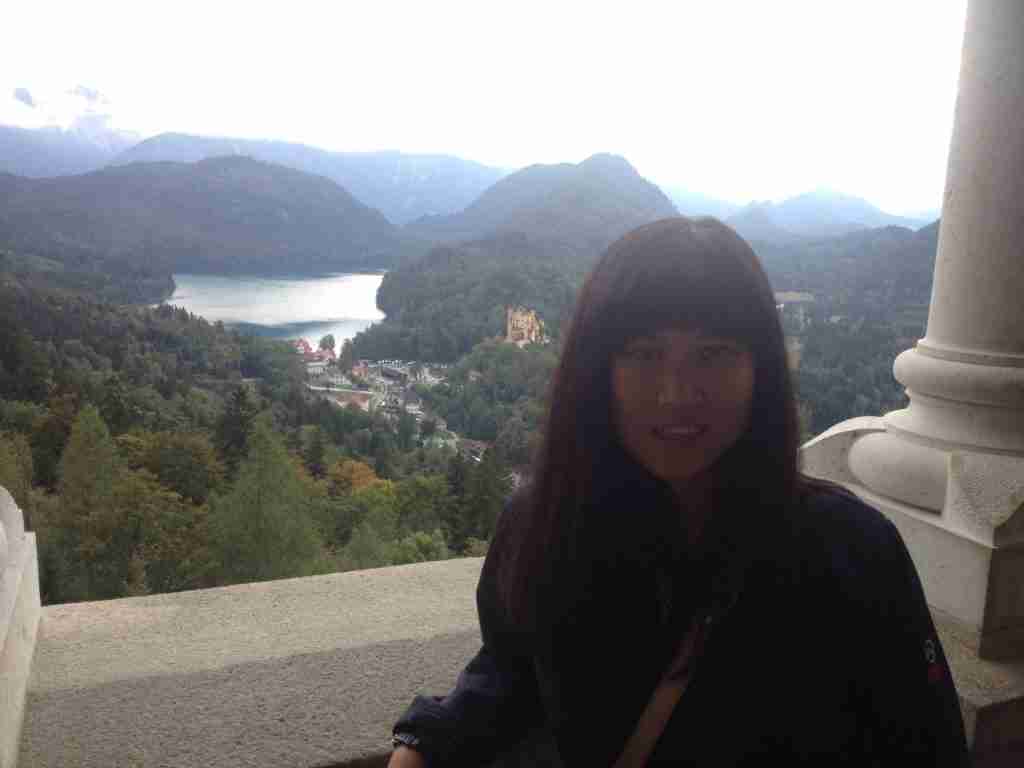 King Ludwig, was a pretty eccentric dude, who frequently liked to immerse himself in building fantasy castles, rather than tackle his kingdom’s actual problems of invading armies and national debt. In fact, his cliff-top fairytale castle took SO long to build (over 16 years) and racked SO much debt, it bankrupted him with a debt of over $14 Million marks back in 1885.

Not only was it situated on top of a cliff, with breathtaking views (see above), it even had a cave, named “Ludwig’s Grotto”. Yup. A freaking cave inside of an already ridiculously fairytale castle on top of a cliff. Hugh Hefner would’ve been proud. Unfortunately we weren’t allowed to take pictures but just picture something Donald Trump would build in his penthouse if he were a bat.

Unfortunately, King Ludwig’s extravagances and eccentricities caught up with him, in 1886, when his enemies had him declared insane and forced him to leave the castle.

Not long after, his body was found in shallow water, after he went for a stroll around the castle. Even though he was a very strong swimmer and no water was found in his lungs, his death was ruled “suicide from drowning”.

I guess people weren’t a big fan of him blowing their taxes on fairytale castles. Oops.

Munich turned out to be pretty pricey, but since we only stayed there for 4 days, it didn’t do much to our budget. Plus we got to see a fancy fairytale castle built by a mad king, and drink until we can’t feel our faces. Good times!