Before coming to Poznan, our knowledge of Poland’s experience in WWII was…less than positive. Namely, getting bulldozed by the Nazis and the horror that is Auschwitz.

We had no clue that the Poles played a huge role in helping the Allies win WWII and it’s something Poland gets very little credit for.

Ever heard of the Enigma machine? It’s the encryption machine used by the Germans to encode their military communication during the war.

The thing about the Enigma machine is that it was the greatest encryption device in history. Not only was the settings of the machine sophisticated enough that it could generate 158 962 555 217 826 360 000 combinations (that’s like 1.9 BILLION times the amount of money Warren Buffett has), the Germans used to change the setting everyday at midnight. Since computers didn’t exist back then, it would take 20 million years to manually break the machine even if 10 people worked on trying a combination per minute for 24 hours every day, 7 days a week.

No wonder it was considered by the Germans (and the rest of the world) to be unbreakable.

As a result, the Germans used it for their top military secrets with no fear of their messages being decoded.

The Brits, seeing that breaking the Enigma code as pivotal to winning the war, gathered a group of the best mathematicians and code breakers to work on a top secret project at Bletchley Park, Buckinghamshire, with the sole purpose of breaking the Enigma.

Long story short, the Brits did end up cracking the Enigma code, with most of the credit given to Alan Turing, who invented “The Bombe,” a precursor to our present day computers. This enabled intercepted German messages to be rapidly decoded, and as a result saved thousands of lives and ended the war. 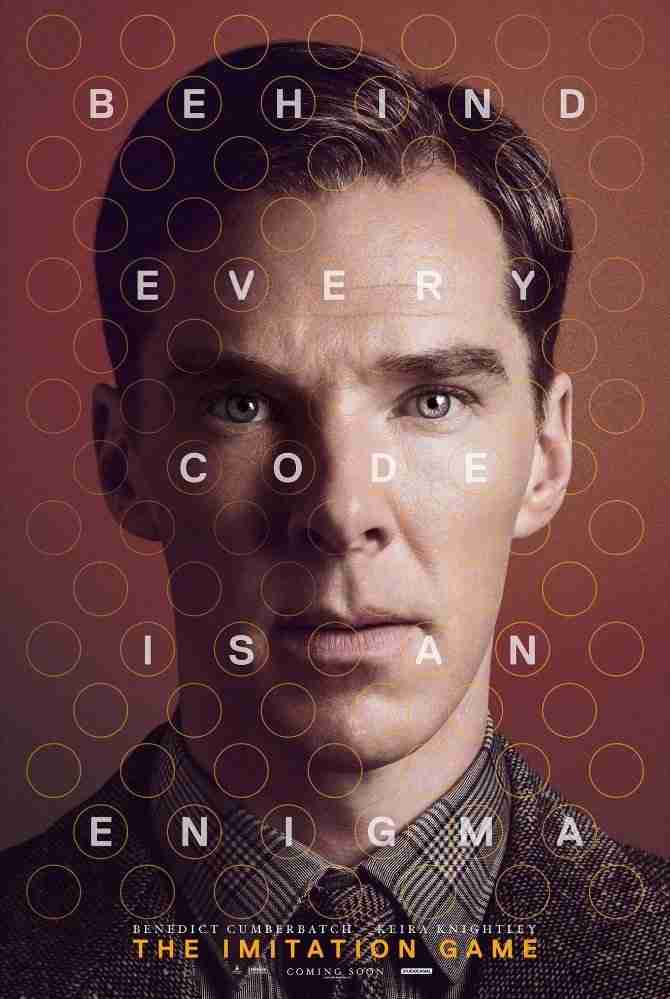 That’s all fine and good, except, very little credit has been given to the Poles, without whom, Turing would’ve never been able to build the Bombe, since it was based on the work by Polish codebreakers Jerzy Rozycki, Henryk Zygalski, and Marian Rejewski. They were the ones who discovered that electro-mechanical machines, called “bombes” needed to be built rather than just rely on linguists—which the Brits used—to break codes.

So it wasn’t for these brilliant Polish mathematicians, Turing would not have been able to break the Engima Code based on years of their work. And it all happened here, at the University of Poznan.

We learned all about this in the encryption museum, a popup museum cleverly set up to look like a box resembling the Enigma Code: 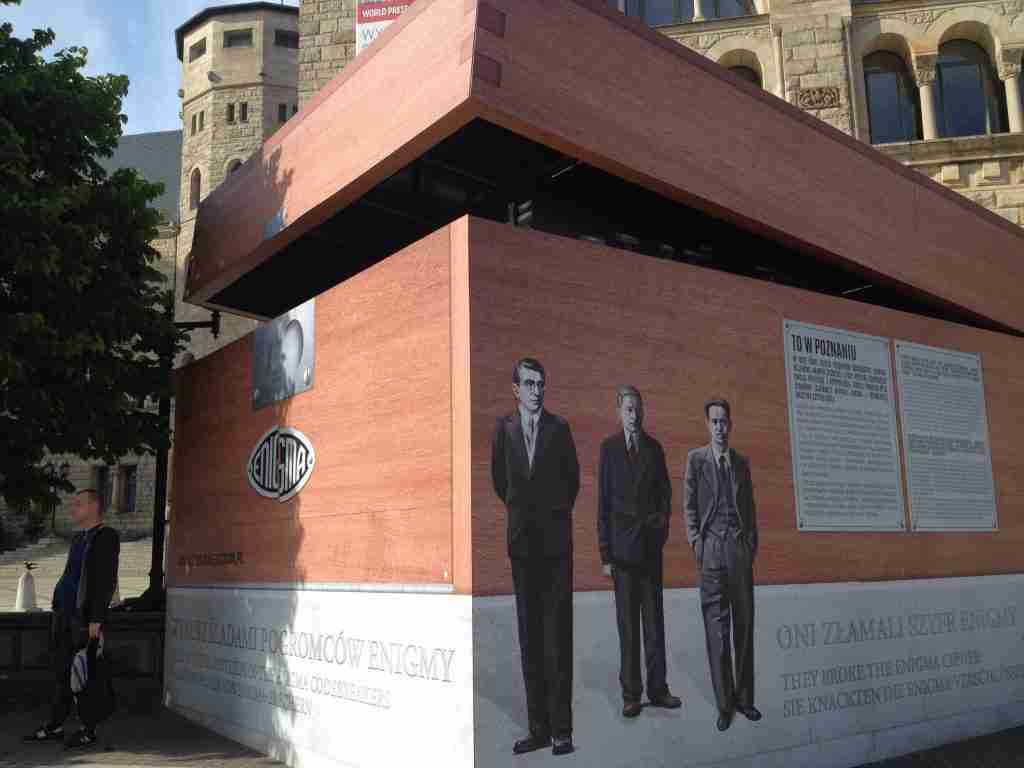 One of our favourite things about world travel is learning that there are two sides to every story. We often learn history through school textbooks, but we never hear the story from other countries’ perspectives. As a result, details end up being omitted, or simply unknown, and when unearthed completely changes your perspective and makes you question everything.

This is why we love travelling. So we can learn about history and question everything.

Oh and also to stuff our faces—which we did plenty of in Poznan. 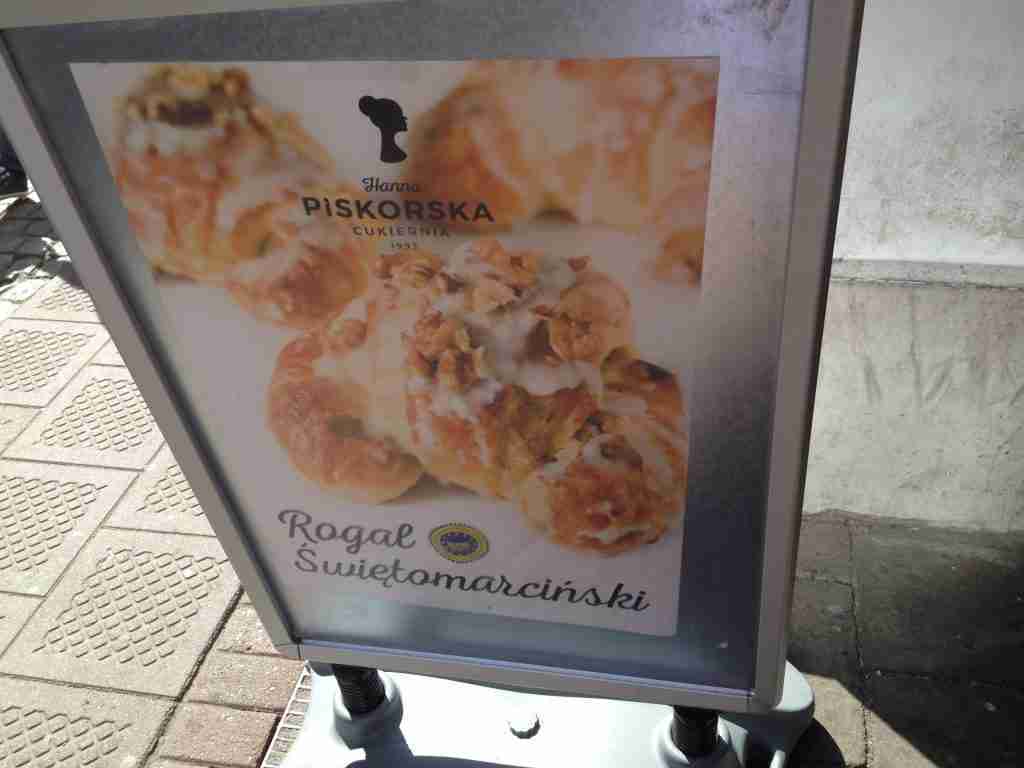 Up until this point, I’d never eaten a croissant that weighed nearly a pound. Tasting more like a decadent after dinner cake than breakfast on the run, its insides were filled with a sweet, nutty paste made of poppy seeds.

This tasty treat is named after St. Martin, a Roman legionary, who shared his coat with a beggar in winter, a symbol for mercy and kindness. That’s why it’s so big—because it’s meant to be shared. And that’s why a local pastry maker, Jozef Melzer who first invented it, distributed it to the poor, in the spirit of St. Martin’s generosity.

The most interesting thing about this pastry is how hard-core the Poles are about it. Apparently, the St. Martin’s Croissants are so revered they are protected by European Union (no, seriously)! Only those Poznan Pastry Chefs who carry a quality certification called a “Rogal Swietomarcinski” and can fulfil strict requirements are allowed to bake it.

So much reverence and prestige—none of which I reflected on as I hovered the whole thing in two seconds flat. I regret nothing. 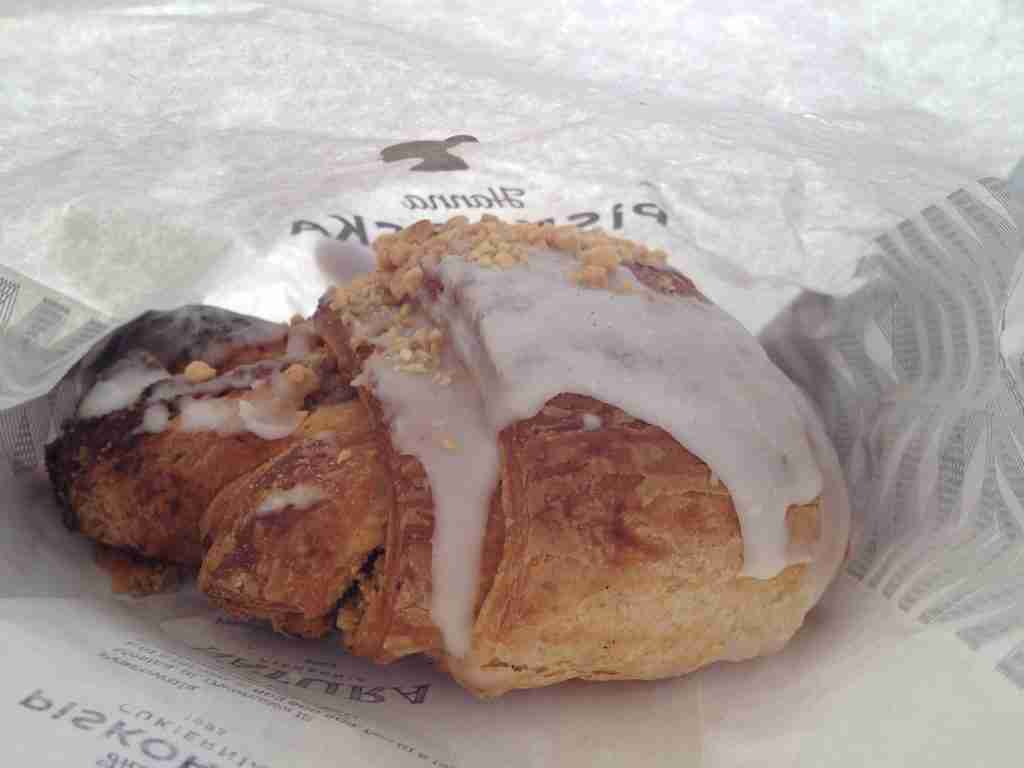 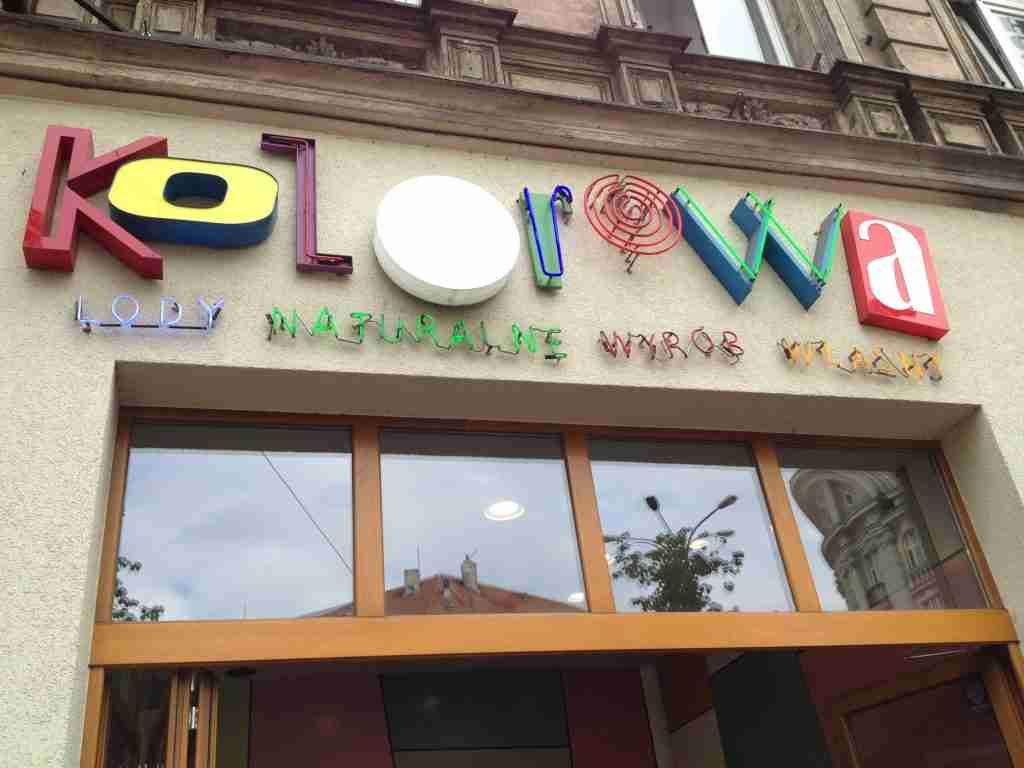 We discovered this ice cream (or “lody” in Polish) shop by accident.

I had already eaten lunch and wasn’t even hungry but when I saw this insane line (which stretched around the block), I had to find out what’s up. 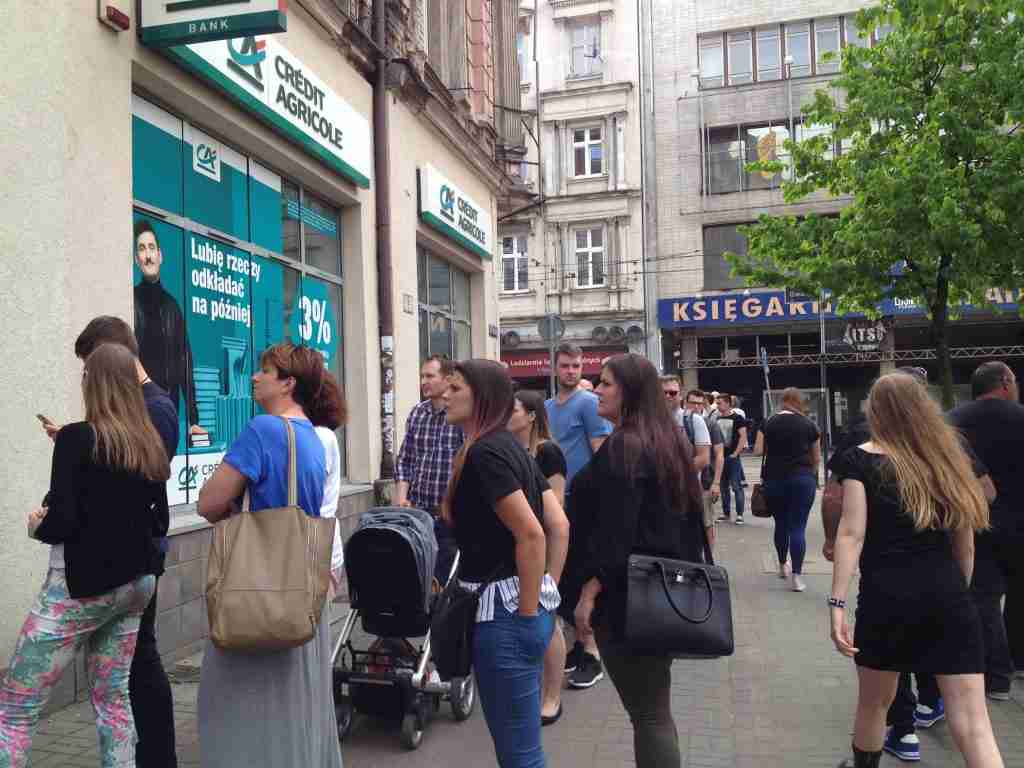 Turns out they were lining up for the best ice cream in all of Poznan. And at 6 Zlotys (1.60 USD) for 2 scoops, the price couldn’t be beat. 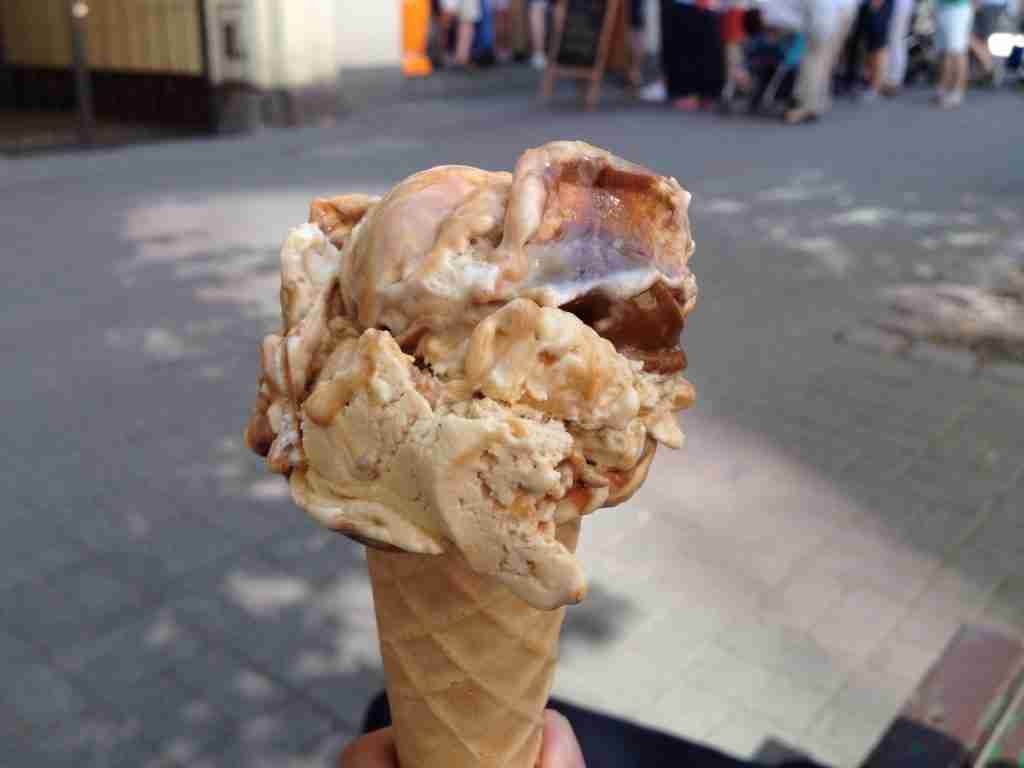 If you’re ever in Poznan, get yourself some lody from this place. The line up is worth it. 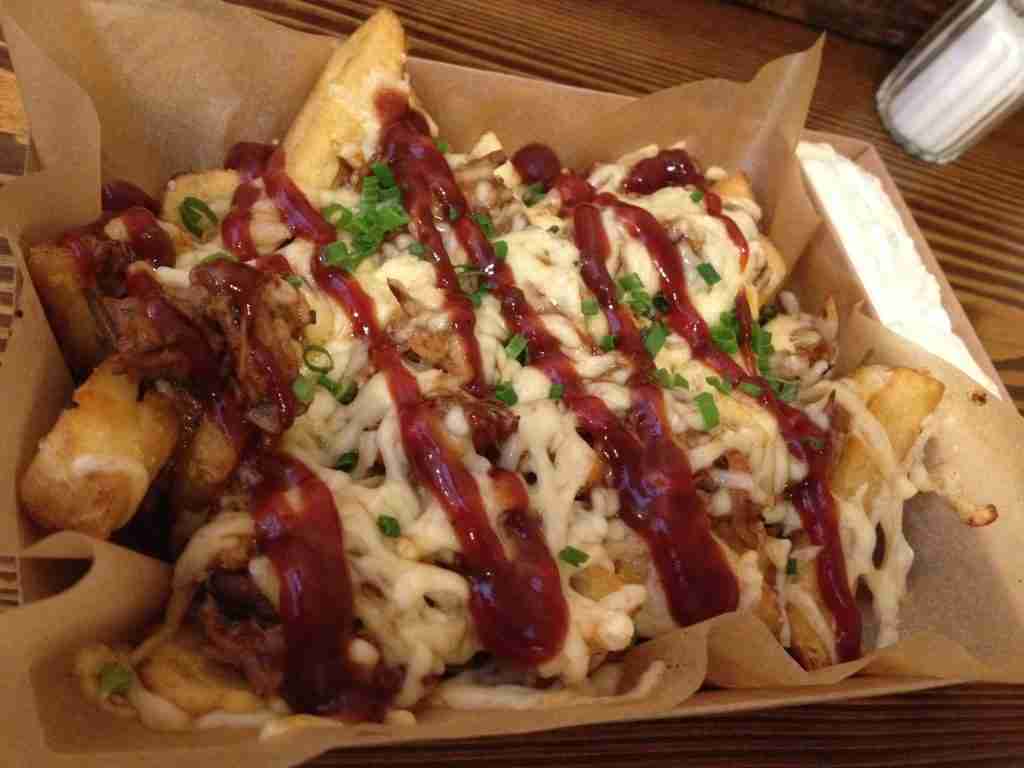 As a Canadian, I’ve eaten my fair share of tasty poutines, but this one blows them all away.

Now, this might sound like the titled of a strip club, and sorry to disappoint, but Milk Bars are actually wholesome places to have a family-oriented meal.

These are local eateries which originally sold only milk and egg-based meals and was started by a dairy farmer named Stanislaw Kluzewski in 1896. Now they sell all sorts of Polish fare like pierogis, Bigos (hunter’s stew made of meat, sausage and cabbage), and sour rye soup.

Keep in mind, the menus will be in Polish and since these are local establishments, most of the staff can’t speak English. But that’s how you know it’s authentic and it’s half the fun! Plus you get to give your Google Translate app a work out, and at only 26-30 Zlotys ($7 – $8 USD) for a meal for 2 with drinks, your wallet will love you. 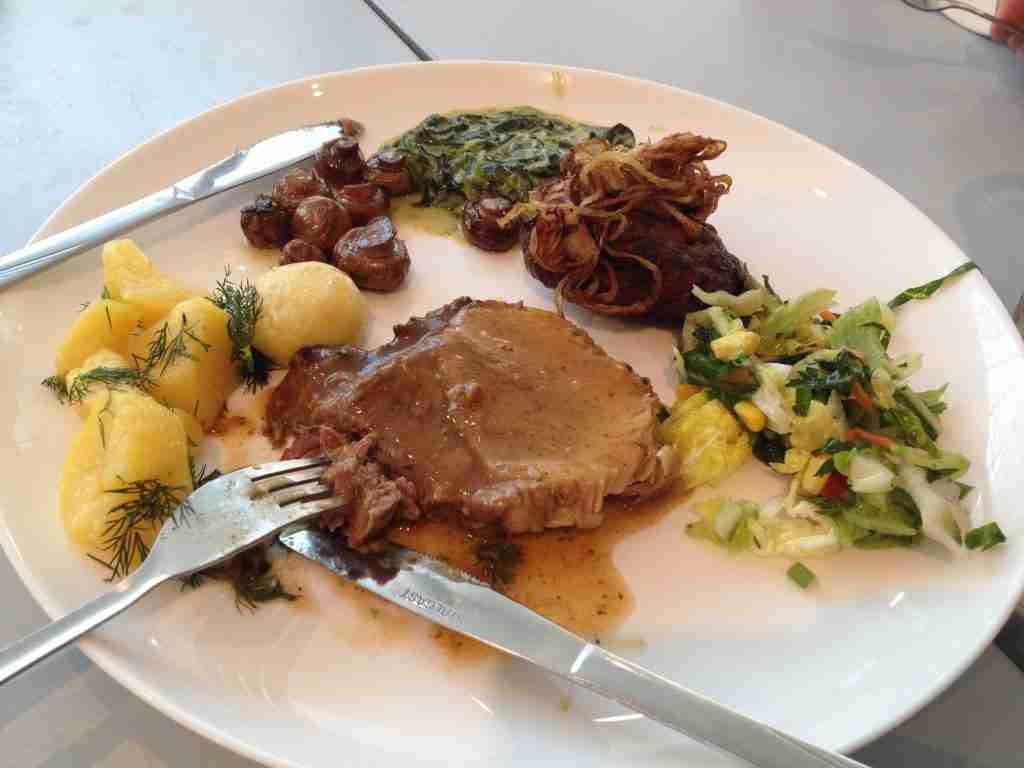 After pigging out, we decided to explore more of the historical areas of Poznan. 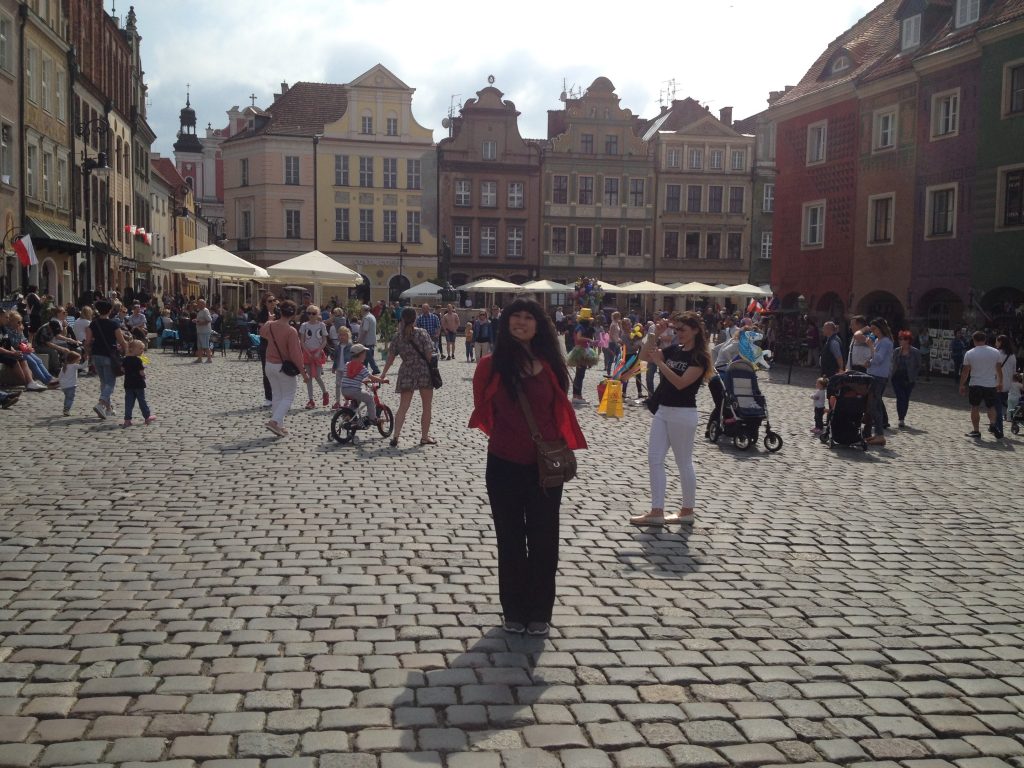 One of the biggest attractions is the town clock, with two fighting mechanical goats that come out at noon to greet the crowd, a traditional continued all the way from 1551.

Legend has it that a chef, let’s call him “Pete”, was hired to cook an elaborate meal for the mayor and visiting dignitaries. Now, known as the best chef in town, “Pete” decided to go all out and cook some roast deer for the special occasion. But as the pressure got to him, Pete was so distracted and stressed out he didn’t even notice when the venison fell off the spit and into the fire.

So basically, his cooking style is similar to mine. Start cooking, get distracted, then burn it to crisp.

With the piece de resistance of the meal on fire, Pete went to the butcher to get new meat but they were out.

Desperate to save the meal (and his reputation), Pete captured two grazing goats from a nearby field. But before he could cook them, they escaped and ran to into the tower of the town hall. As shocked crowds watched from below, they started fighting and locking horns.

This ended up amusing the mayor so much; he forgot all about the missing meat in his upcoming meal and had a town clock commissioned to commemorate the “fighting goats.”

That’s why the official symbol of the city is two fighting goats. What can I say? The Poznanians love them so goat-on-goat violence.

In addition to the food and history, if you’re a fan of spas and saunas like we are, go to Termy Maltanskie. It’s a pool/sports complex/sauna all rolled into one. My favourite part is the adult-only Sauna area, which you can move from steam saunas to woodsy dry saunas to outdoors saunas, made with pine, that makes you feel like you’re in the middle of the forest. And if you go during a weekday between happy hour (from 11am-4pm), you can get a 3-hours access to the gym, pool area, and saunas for only 42 Zlotys ($11 USD).

Only catch: the sauna is mixed and no bathing suits are allowed. This idea may be anxiety-inducing to many of our American readers, but in Europe nudity is much more normalized. Good thing I brought a towel, but since it wasn’t too busy, at some point, we decided to do as the locals do and just let it all hang (pun intended) out. And no, I didn’t take any pictures. That would have been a tad much.

We quickly found out later that we’d be doing much more naked sauna-ing in Germany, but that’s a story for another day…

Overall, the prices in Poznan, just like the rest of Poland was dirty cheap. Here’s how much (or little) we spent during our week there:

What do you think of Poznan? Would you ever go there?