Note: This post was written before the pandemic. We are still in Toronto and I put up this post for everyone who, like me, can’t wait to get out there and travel again 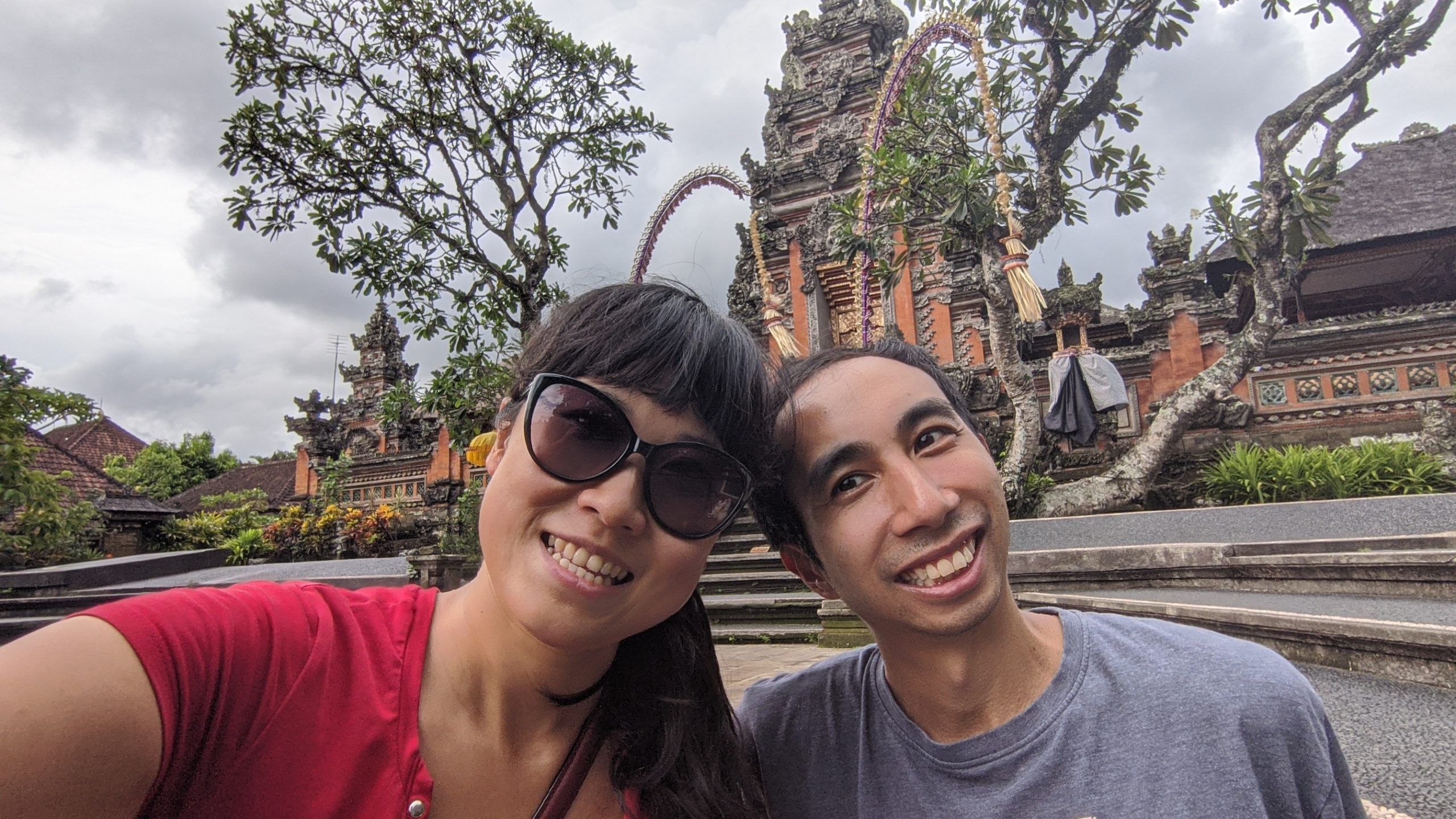 Some places leave footprints in our hearts, transform our minds, and we are better for having visited it. They are so breathtakingly beautiful; we never ever want to leave.

Bali…was not one of those places.

Sorry to disappoint you, but my description was actually about Chiang Mai. I was hoping Bali would be another such place. But sadly, Bali did not live up to my expectations.

So many expats told us Ubud, Bali was the next Chiang Mai, we expected a spiritual sanctuary and digital nomad paradise.

Lesson learned: Don’t have any preconceived notions of a place. You will inevitably be disappointed.

I suspect Bali, known as “the Island of the Gods”, was once an unspoiled paradise steeped with local culture and customs. Now, it’s an instagrammer-infested tourist trap, full of “woo-woo” people trying to sell you “rose water” and bragging about going to alcohol-free “conscious moon parties” where they can feel superior about their vegan lifestyles and pat each other on the back about being environmentally-conscious despite owning multiple gas-guzzling SUVs back in North America.

If I could describe Bali in two words, it would be “Fake LA”.

Here are a few things you should know before going to “Fake LA.”

If you like being hassled every 5 mins, experience dangerous driving, and get charged whatever random fare the rigged taxi meter spits out, Ubud is for you.

And guess what? Unlike Chiang Mai, where you have the option of the local bus, Songthaews, and Grabs (the Asia version of Uber), in Ubud, you’re stuck with the Taxi mafia as your only option.

Even though ride-sharing services like Grab are allowed in other parts of Bali like Denpasar, Ubud Taxi drivers will literally beat up a Grab driver if they catch one coming to pick you up.

I’m fine with paying a higher fare if they do a good job, but not if they continuously get lost, drive dangerously and are rude to their customers, which is what we experienced with the local taxi mafia.

If you go to Ubud, do yourself a favour and get the number of a local driver and agree on a set price (you can use the Grab app to figure out the ballpark figure).

If you decide to go the Monkey Forest in Ubud, do not bring any food or drinks. Not even water.

I thought it was safe to haul around just an umbrella and bottle of water in a cloth shoulder bag. I left my wallet, camera, and phone back at the Airbnb since monkeys have been known to pickpocket you and then hold your stuff hostage until you exchange it back with treats.

Oh how naïve I was.

I was walking over a small bridge, minding my own business, when I felt something heavy slam into my shoulder.

Next thing I knew, the monkey that had just landed on my back, yanked the bag off my shoulder and took off with it into the forest.

Suddenly, the thief’s companion, a small little monkey dropped onto the ground in front of me, baring its sharp teeth and hissed.

I backed away slowly. A $15 umbrella and $1 water bottle probably wasn’t worth getting rabies.

By the time I was back on the bridge, the monkey thief had dumped my bag out on the ground and started pawing through it. After opening the umbrella and twisting the bottle open with his teeth, he took a gulp. Realizing it was just tasteless water, he eventually got bored and ran off, leaving behind a mud-soaked umbrella and a crushed water bottle in his wake.

As a traveller in Ubud, you are a walking ATM. Rigged ATM machines, unscrupulous money changers, counterfeit SIM cards, shopper-keepers who try to short-change you. These are just some of the scams you’ll come across.

We should’ve been more vigilant since these are scams that we’ve been warned about the first time we came to South East Asia, but we’d gotten so comfortable and so trusting from being in Chiang Mai that we completely forgot.

I got a headache daily from all the mental gymnastics we had to do to find reputable ATMs with guards outside to avoid having our pin hacked and counting and recounting our money at foreign exchange counters to avoid being scammed. Since Indonesia Rupiahs are denoted in 10,000s, it’s easy for them to take advantage of travellers who get confused by the large denominations.

After the first day, I missed being in Chiang Mai where you could turn your brain off and just relax and be happy.

Forget traditional, authentic home-cooked Balinese food. When you’re a trend-whore who prefers dishes with “Instagram-worthy” names like “hemp fig shakes” or “buckwheat granola” but don’t want to shell out L.A prices, why not come to Bali and have everything catered to you at half the price?

If you’re Asian, be prepared to be the only Asian person in the restaurant. None of the locals can afford to eat there, and nor will they want to as none of the food there will be recognizable as authentic food from home.

What we love most about Southeast Asia are the night markets and food hawker stalls. This is where culture shines. You can literally taste the culture and history in the food, and it’s the best feeling because in Asian cultures, Food = Love, so it’s like getting a hug from your grandma with every bite. Also, you’ll see all kinds of people eating at night markets—from the most ostentatious banker to the humble rice farmer. Hawker stalls are the great equalizer.

In Ubud, the food is highly stylized, trendy, and only affordable to those who are privileged enough to afford it. It’s all style, no substance, and not down to earth at all.

It was so exhausting trying to find some normal, authentic Babi Buling (Balinese Roast pig), I wanted to leave after 2 days. If I wanted to eat food from L.A, I’d just go to L.A. This is Bali, where the hell is my Balinese food, damn it?

If not, forget about going to Ubud.

If you’re spiritual and emotional and this is your thing, great. But for a logical, scientific-minded person like me, handing over large sums of money to learn about how to “manifest energy from the cosmos” made me roll my eyes so hard I could see the back of my skull.

I wanted to go there to learn about Balinese culture but once again their spiritual traditions took a backseat to overpriced western “woo-woo” bullshit.

This is why Ubud felt more like “Woo”-bud to me.

All is Not Lost

Now, it might sound like I really hated Bali and never want to go back, but there was one experience there that made up for all the scams and superficial-ness.

It came to us in the form of a soft-spoken, smiling Balineses rice farmer named “Gusti”.

We ran into Gusti, unexpectedly, while coming back from one of the most touristy, crowded places called “Campuhan Ridge”.

I’d read countless traveller posts about how “unmissable” and photogenic it was. But in reality, just like the rest of the hyped attractions in Bali, it was crowded and not all that interesting.

What was interesting, however, was the undiscovered paradise across the river, practically right next to it. 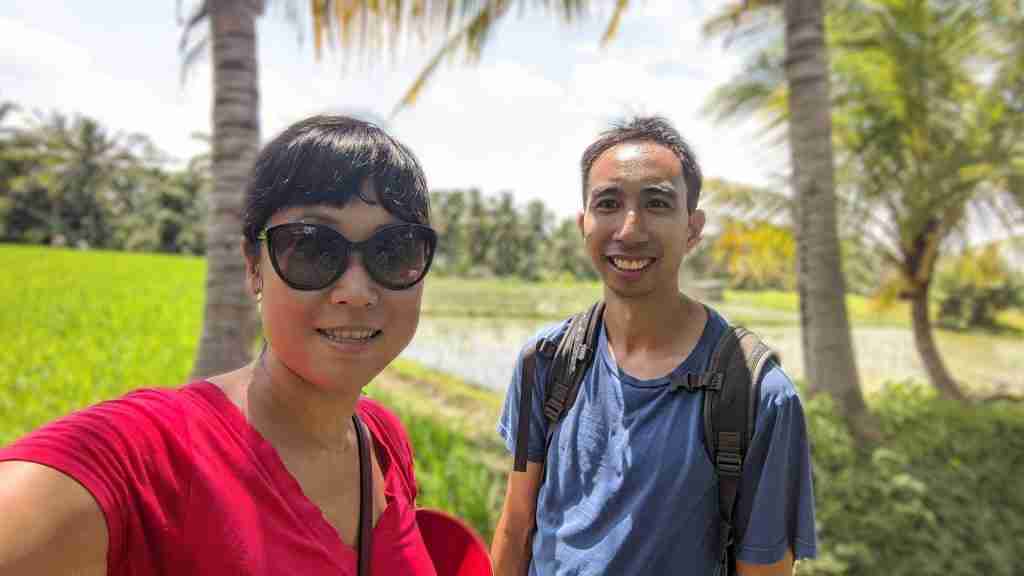 Sari Organic Walk is a walking path shaded by palm trees, winding right through the rice fields in the northern part of the city. This was the first time we could actually be in Ubud without our thoughts being drowned out by the noise of a thousand  mopeds whizzing by.

A man in tattered cotton shorts and bare feet, sitting on the rice field called out to us.

“Welcome to Bali,” he said smiling. He then pointed to a row of yellow coconuts by his feet, “You want to buy some coconut? Very cheap. Only 10,000 Rupiah”.

I’d completely drench my t-shirt by that time from walking around and avoiding the Taxi Mafia, so I gladly handed over the money and took the coconut. I downed most of it in one gulp.

“Hi Gusti!” I said, his hand felt rough as sandpaper and I could feel the callouses on his thumb as I shook it.

“I show you secret waterfall near my house. You come with me.” He said, beckoning us to follow him as he deftly made his way down a muddy path and towards to the river. We were both wearing running shoes and still couldn’t keep up with him.

We arrived at a serene little spot along with river, with a canopy of trees giving us the amount of perfect shade on a hot day. The best part? We were the only ones there.

Gusti showed us the little waterfall, and then found us a spot to sit, which was a natural pool surrounded by rocks right by the edge of the river.

He then performed a beautiful water blessing ritual, with us holding hands and standing in a circle, while chanting a poem he wrote about what he wishes we would get out of our experience in Bali.

I took a deep breath and felt completely at peace and zen.

“You, a happy person,” he said, to Wanderer, looking directly in his eyes.

Then he turned and stared directly at me and said, “I can see, sometimes you think too much.”

He was right, of course, because at that moment I was worrying about how we were going to get back up the muddy trail with all our stuff.

Turns out, I didn’t have to worry, because Gusti lead the way, holding our hand any time we slipped.

He even took us to his farm house, were we met his mom, who was sitting topless on the floor and weaving a basket with bamboo leaves, smiling a toothless smile at us.

And finally, Gusti performed his most daring feat, which is climbing up a coconut tree, with nothing but a grass wreath wrapped around his feet, to get us some more coconuts.

For that reason, we’d go back to Bali in a heartbeat, if only just to visit Gusti. Next time though, I’ll skip the pretentious restaurants and get a rabies shot in case I get attacked by the Monkey Mafia again.

Here’s how much we spent in Ubud, Bali:

What do think? Would you go to Bali?