Once we started travelling, we realized the best way to gather intel about places to visit is to simply ask other travellers. And 90% of the time, their recommendations are spot on. So you can imagine our disappointment when, over and over, after asking about Vietnam, we got these unanimous responses:

The biggest blow was this article, written by our budget travel hero, Nomadic Matt:

Why I’ll Never Return to Vietnam

We almost skipped Vietnam all together, but his wise words at the end of the post changed our minds:

“But just because I didn’t like Vietnam doesn’t mean you shouldn’t go. This is my experience, but you should always just take what someone says, file it away, and go yourself. And if you don’t go because of this article, I’ll find you and drag you there myself.”

To save Matt the trouble of dragging us there himself, we decided to go to Vietnam to see if it really is as bad as everyone says.

As soon as our plane touched down in Nha Trang, I prepared myself for battle. Walking through the arrival section, I mentally scanned through my “Vietnam Survival Guide”:

Clutching my purse to my chest, my eyes swept the area continuously for touts, ready to elbow the first guy in the face who tries to pull the ol’ “shoe repair” scam.

It was exhausting trying to be vigilant all the time, but luckily after only the 2nd day, I realized it was pointless.

Turns out, the trick to avoiding touts in Vietnam is to NOT stay in the tourist area. Because we stayed in an AirBnB in the local area (that was still only 5 mins from the beach), we managed to get the best food, best deals, and meet some of the nicest people we’ve ever met.

Two of these people were Sean and Leah, our hosts from Australia.

“People keep asking us ‘when are you back going home’?” Leah said. “When we say ‘but we ARE home,’ they get very confused.”

“So why don’t you want to go back to Australia?” I asked.

“Well,” Leah said. “We could stay there and work our asses off for decades and never get ahead, or we could move here and already be ahead.”

“It was a no brainer,” added Sean. “We have a community here, luxury style living for next to nothing and delicious food. What else could we possibly ask for?”

And looking out the window of our $25/night AirBnb, I could see why: 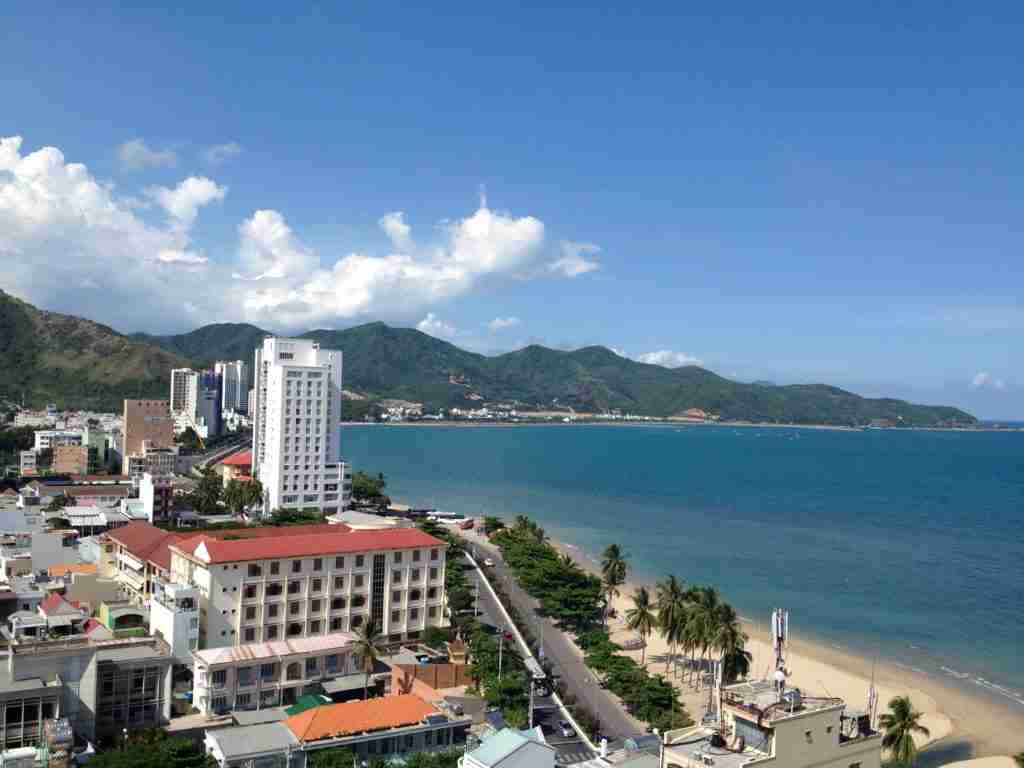 As the happy owner of a top Spa in Nha Trang, you’d never know that Sean once worked a stressful job in IT.

Several depressive episodes and one massive heart attack later, Sean realized he needed to make a change. After showing us the giant scar on his chest from his coronary by-pass surgery, I immediately had déjà vu .

“We knew, if we didn’t get him out, he would die.” Leah said. “That’s why I asked ‘what’s your dream? Let’s work on that instead.”

For Sean, that dream was  to open his very own Spa.

So that’s what they did. Now their award-winning Spa is rated top 10 out of all of Nha Trang, they contribute to the economy by employing locals, and Leah even started an orphanage which has saved the lives of 22 children to date.

And because Sean and Leah embedded themselves into the community, they were able to give us the best recommendations for food. 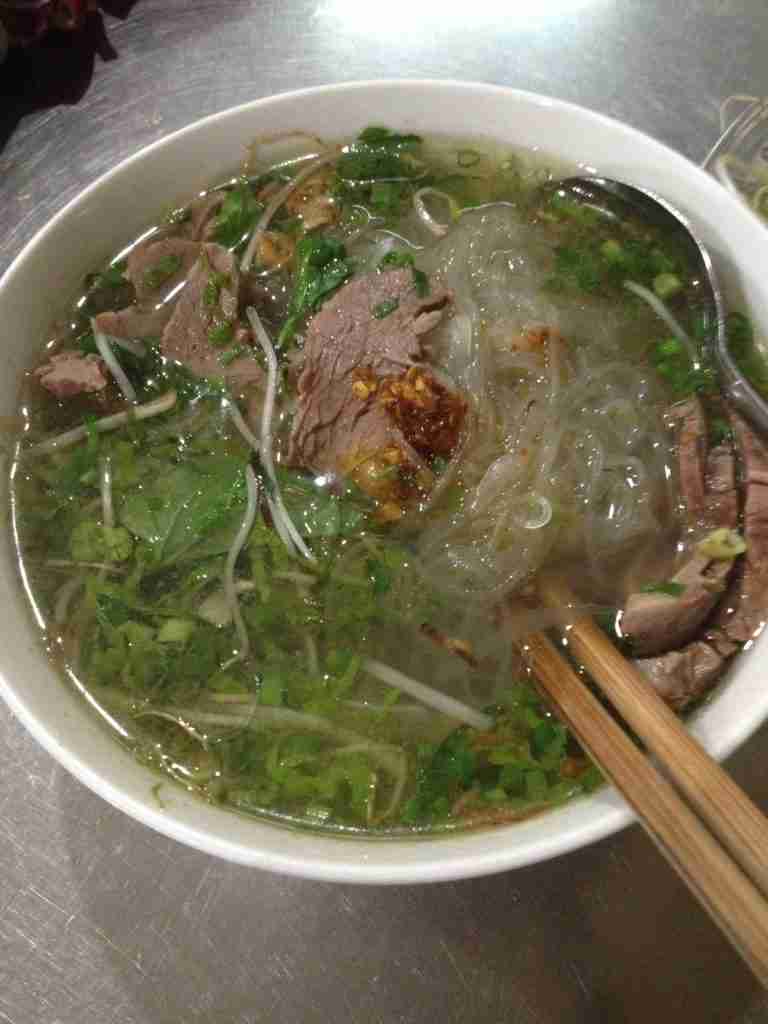 I’ve eaten so many bowls of Pho in Toronto, but after this, I completely turned into a Pho snob. Now I can’t even look at a bowl of Pho unless it’s prepared by a nice old granny who’s been making the secret family recipe for 40 years, and just one sip is enough to make me weep tears of joy.

In addition to the Pho, I also discovered one of my favourite drinks: Vietnamese Drip coffee. 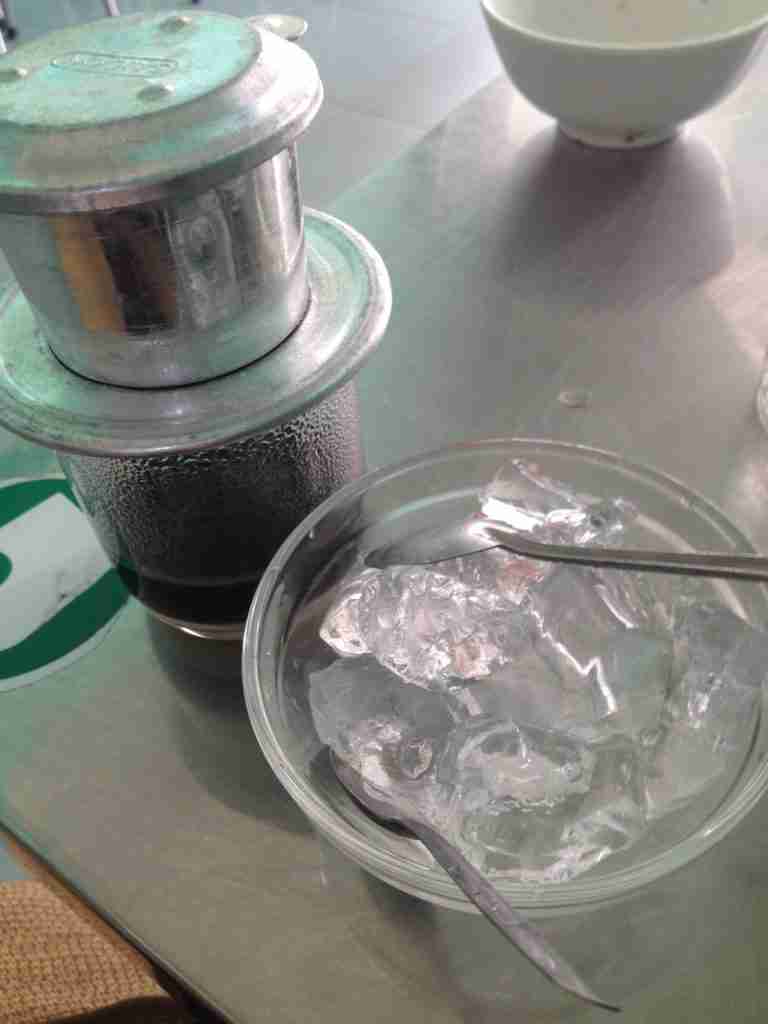 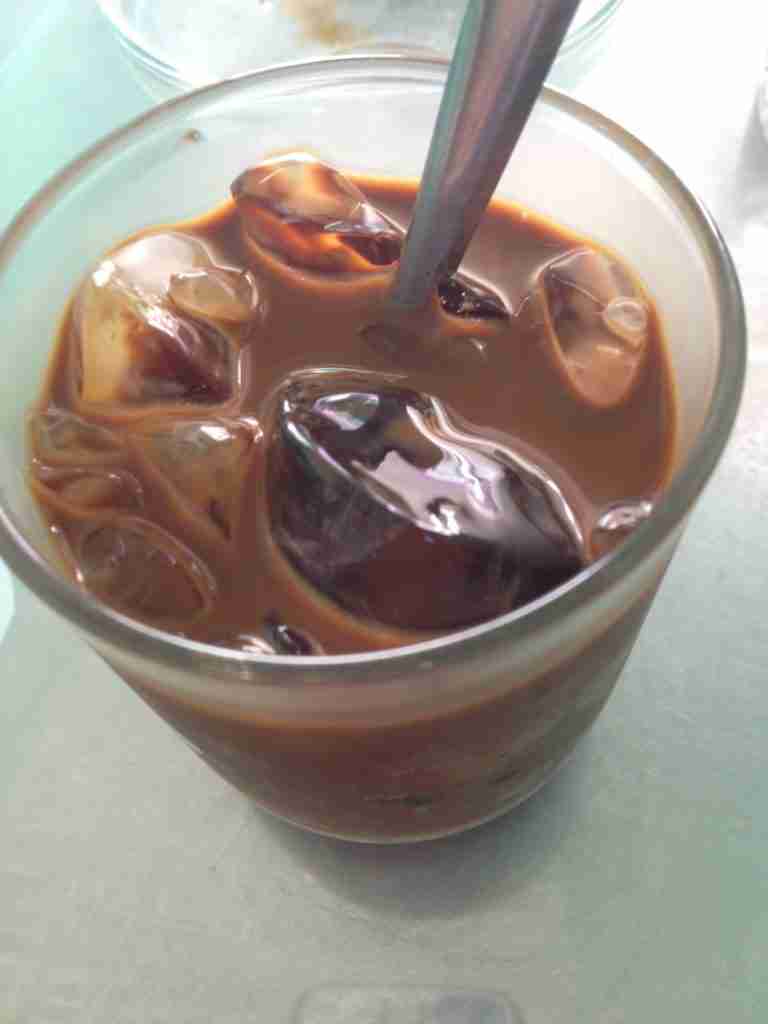 Now, I’m not a big coffee drinker, but the second this liquid, chocolatey goodness hit my lips I was hooked. The coffee, fragrant and strong, is dripped through a filter, and tastes very much like melted dark chocolate served over ice. Yum!

After 4 days in Nha Trang, we really regretted not staying longer. We were so preoccupied thinking we’d dislike Vietnam, we completely didn’t plan for the opposite experience.

Not only was the food amazing, we never got ripped off once. In fact, a few shopkeepers even ran after me, leaving their shops completely unattended, thinking I had forgotten my change when I left it for them as tip.

And even though Vietnam didn’t have the quantity and quality of Thai masseuses, they had something that was almost as good: 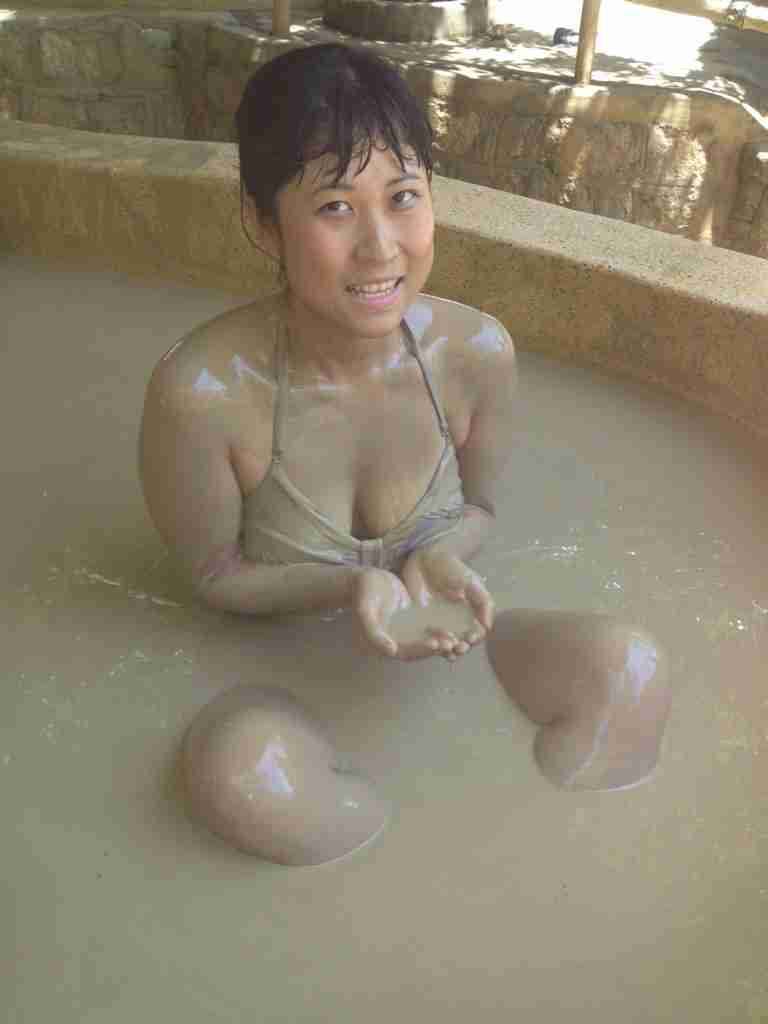 Mud Spas. Perfect for cooling you off on a hot day.

It left my skin feeling so soft, it put Prince George’s butt to shame.

After Nha Trang, we were pretty pumped for the next place (which Leah recommended and taught us is pronounced “Hoo-ay “ not “hu-ew”).

Admittedly Hue was way more touty than Nha Trang. We had one rickshaw driver follow us around the outside of the royal palace demanding that we hitch a ride with him. Another lady tried to charge us double the price for a bowl of lacklustre “bun bo hue” (Hue’s specialty).

But none of those things mattered, after we saw this: 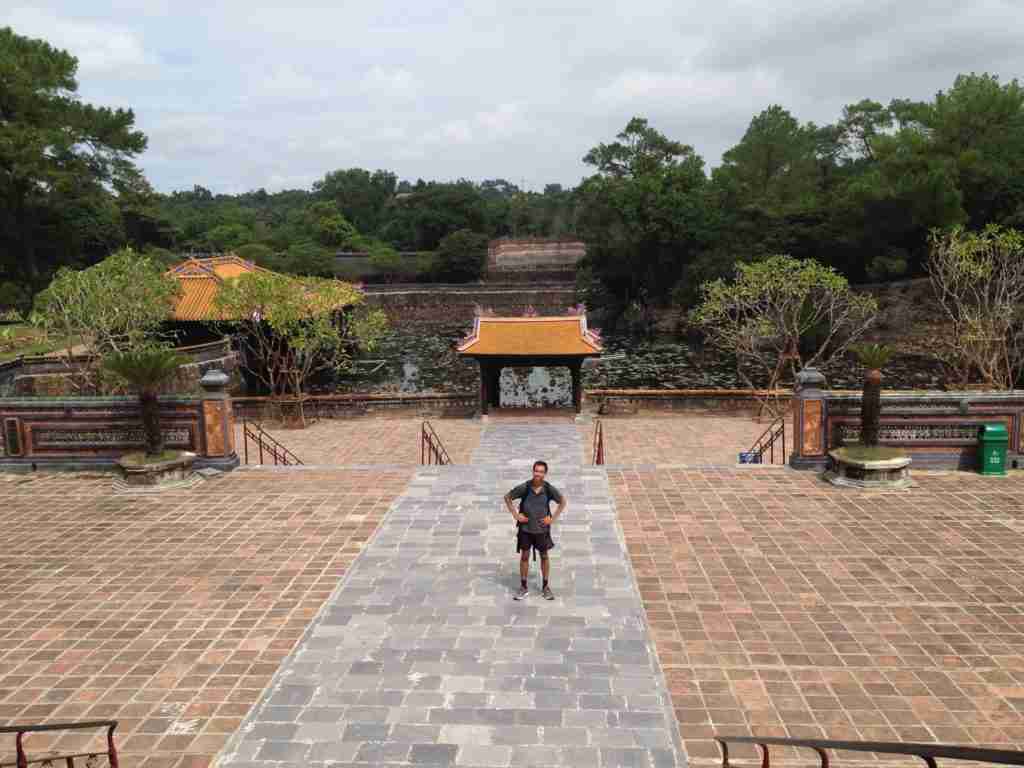 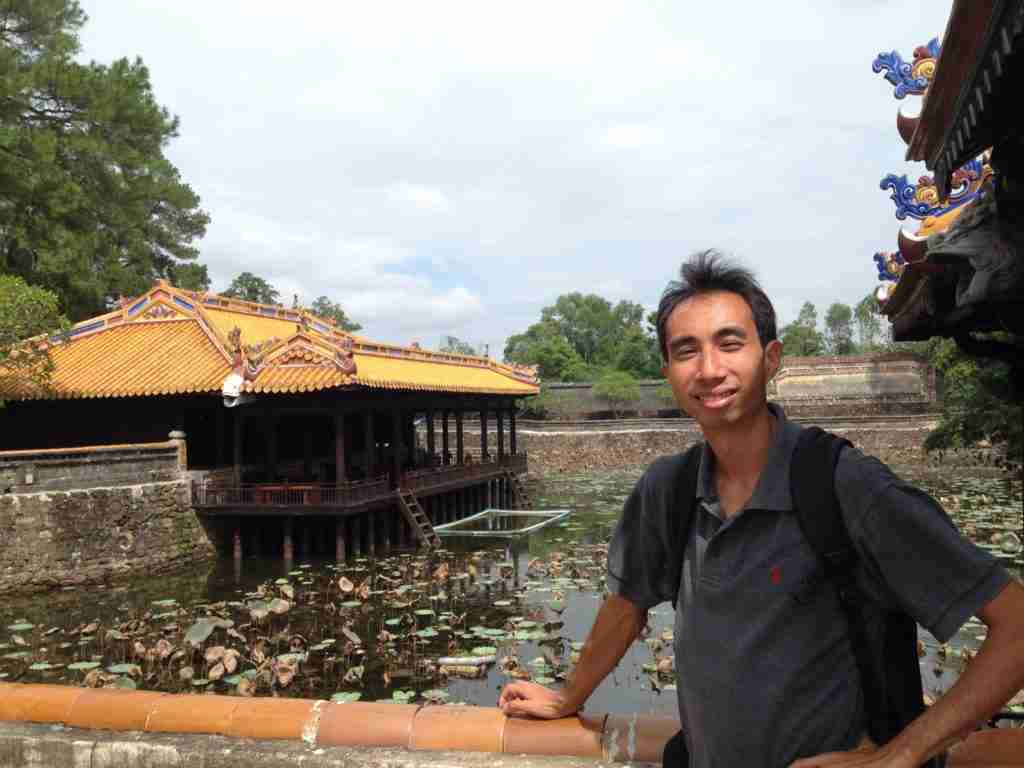 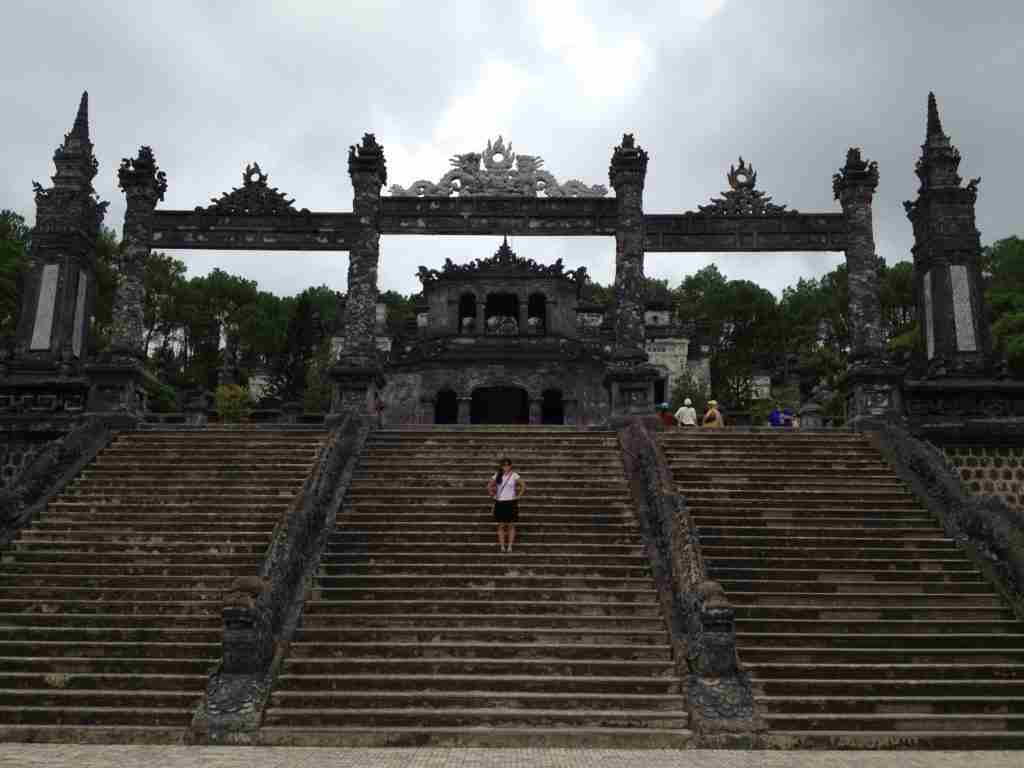 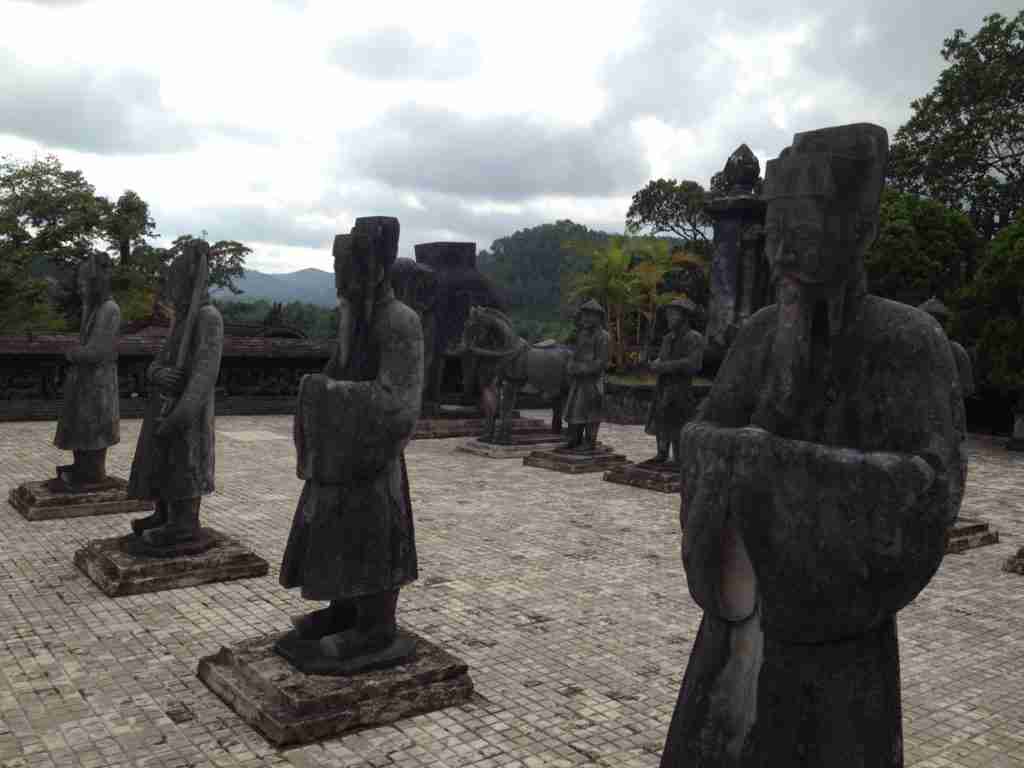 Having been the old capital during the Vietnam War (or rather American War as the Vietnamese prefer to call it) some may say Hue is full of spirits and ghosts. But I thought it was pretty magical.

And the best part was that because most of the travellers we spoke to had such a negative memory of Vietnam, we pretty much had the place to ourselves. 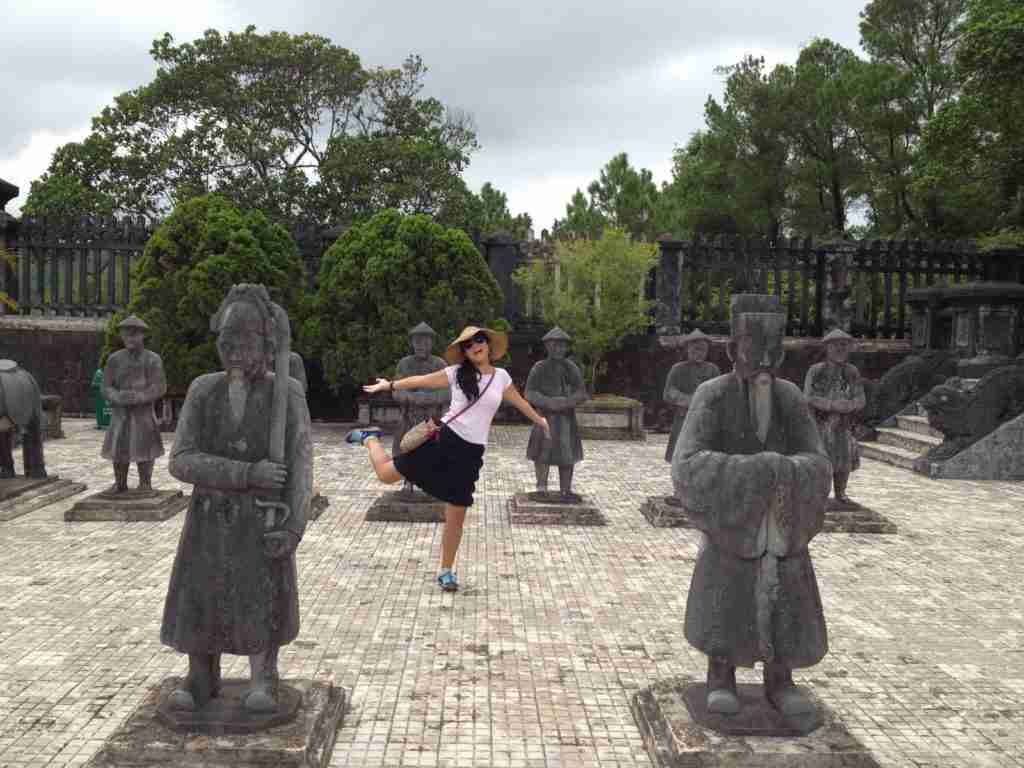 After a full day of sight seeing and looking at the imperial palace and tombs of the emperors, we got to relax and sip a cold Vietnamese coffee by the perfume river. 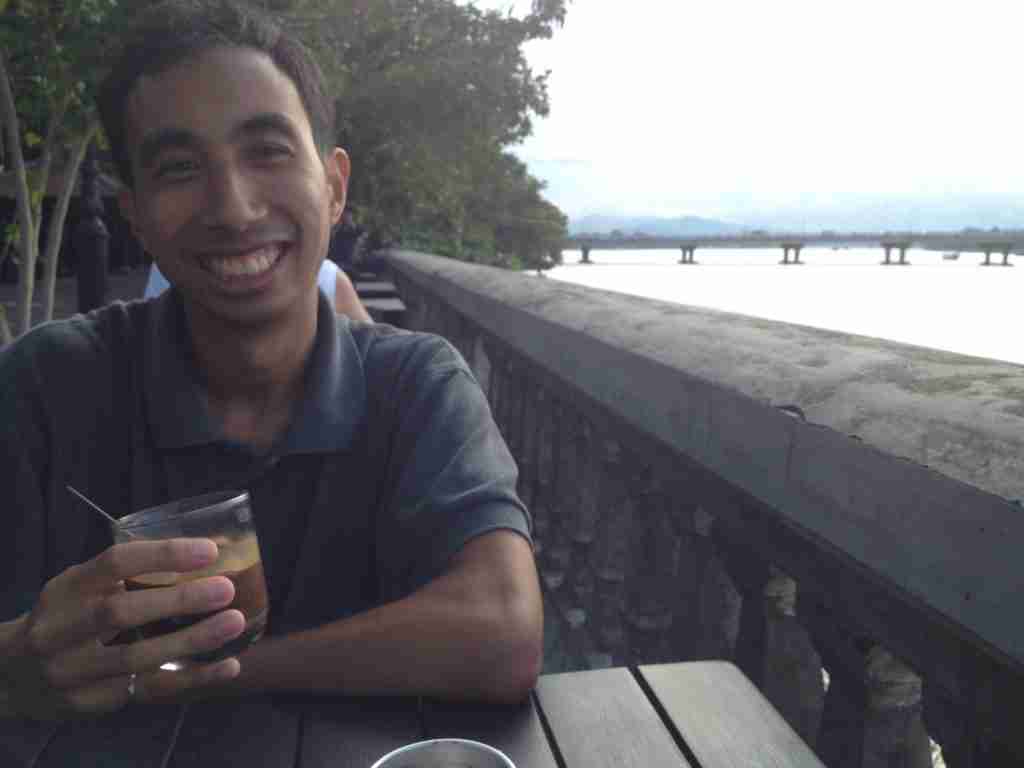 After having such low expectations for Vietnam, we were pleasantly surprised by Nha Trang and Hue.

And the costs were ridiculously easy on the wallet too (even cheaper than Thailand!):

So instead of running back to Thailand before our 1 month Vietnamese visa was up, we soldiered on. And as it turns out, Vietnam had even more surprises in store for us…

Which we will write about in our next Travel Post.