I’m not a big wine drinker. My vices are Sichuan hot-pot, shrooms, and Belgian lambic cherry beer, in that order. In fact, the last time we were in San Francisco for a wedding, I skipped Napa Valley and went to Alcatraz instead.

So I wasn’t keen on the idea of visiting the Douro Valley, the oldest demarcated wine region in the world, just a 2 hour train ride from Porto. Despite it being a World Heritage Site, and despite our AirBnb host insisting we have to go, I didn’t feel the urge.

It wasn’t until I saw an ad for “Quinta do Crasto” that I felt compelled to go to Pinhão, the most scenic village in the area:

We bought train tickets the next day and were told by the operator to “sit on the right side going there, left side going back.”

Good thing I heeded her advice because, as it turns out, the train ride was as much of a highlight as the actual trip.

As the locomotive wound its way through the mountains and then along the river, I stared open-mouthed at the spectacular view: 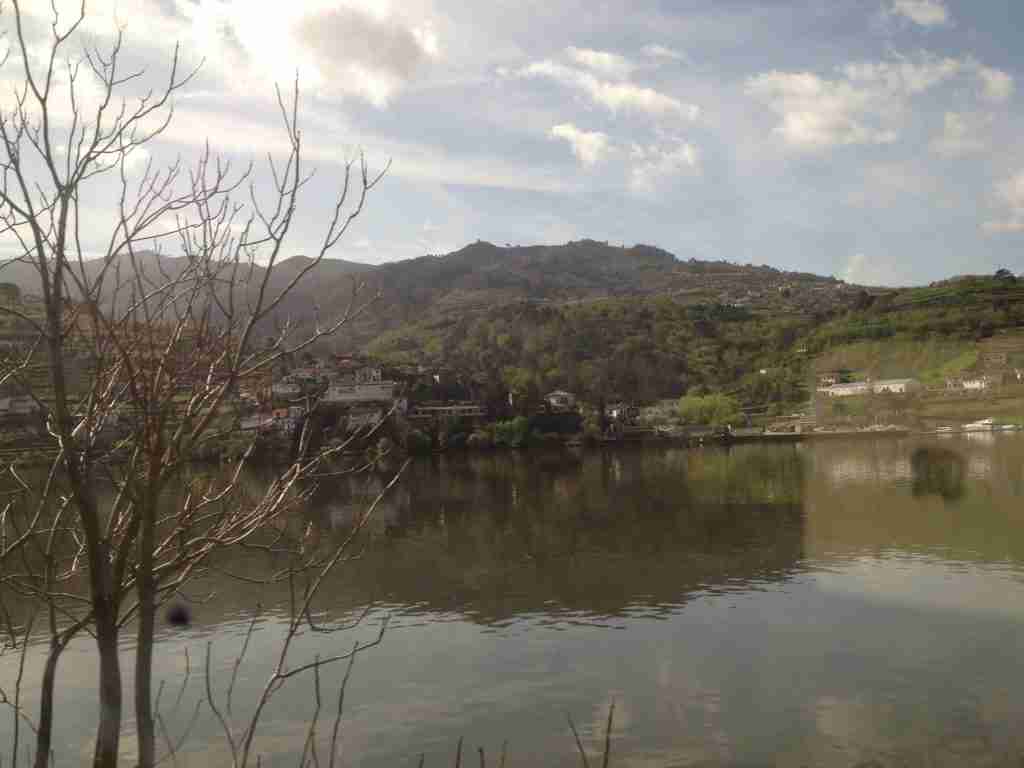 When we arrived, I noticed that just like the São Bento train station in Porto, Pinhão station was decorated with the same distinct Portuguese blue tile, depicting the beauty of the Douro Valley. 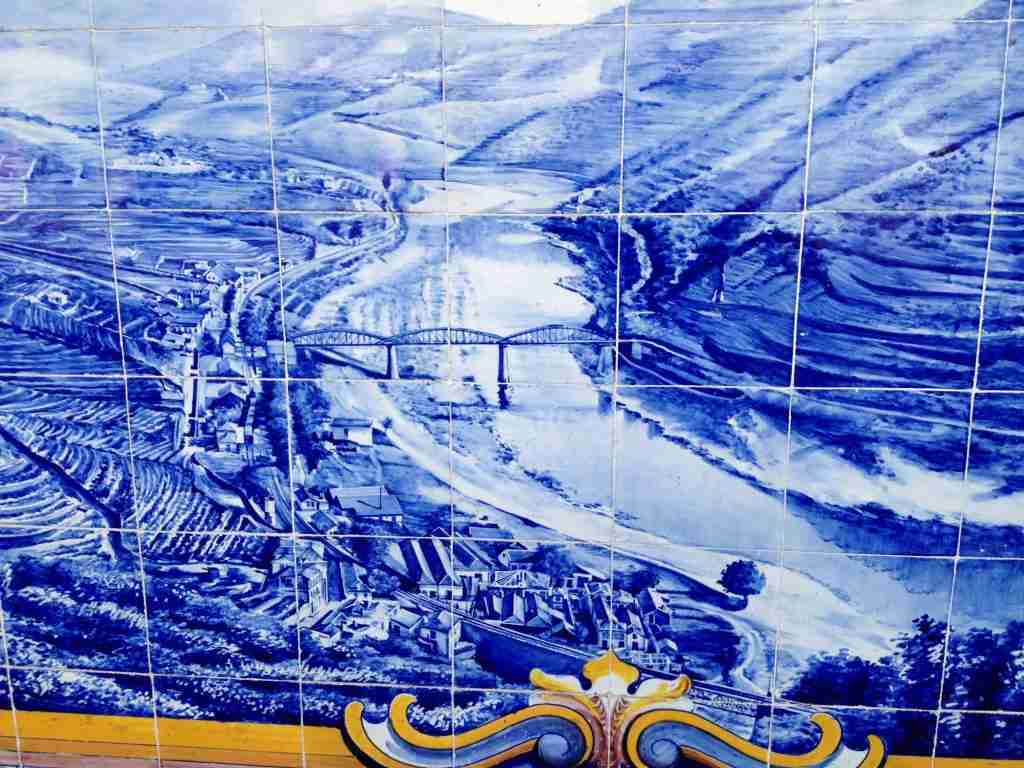 As we walked away from the station to explore, I noticed how quiet it was. Even though this was prime tourist destination, Pinhão was devoid of crowds. I couldn’t believe we were right in the midst of nature, secluded and worlds away from the historical grandeur of the city, despite being only a short 2-hour train ride away.

Yet another reason why I love Portugal. You can get anywhere within a few hours by train.

As I walked by the river, I spotted a little gem of a restaurant, with sweeping views of the hills and river, amply named “the Writer’s Place”.

Our waiter recommended we try something called “lamprey” which sounded innocent enough until we Googled it.

This is what came up:

If that’s not the stuff of your nightmares, I don’t know what is. So apparently, these terrifying satanic eels/leeches feed by attaching themselves to fish and draining their blood. They also happen to be a sought-after delicacy in Portugal.

After it’s been cooked, it looks something like this:

Yeah. Thanks but no thanks. I consider myself an adventurous eater but I just couldn’t stomach the idea of eating a parasite. I suspect it might have something to do with my childhood history of stomach worms.

We decided to go for some chicken liver soup and duck breast instead.

While we were eating, we noticed the guests behind us ask the waiter if they could take a few oranges from the trees on the premise.

As it turns out, most of the houses and restaurants in the area grew oranges in their backyards. With so many oranges and no one to pick them, they would just fall off and rot on the ground.

So of course I had to provide a public service by eating as many free oranges as I could: 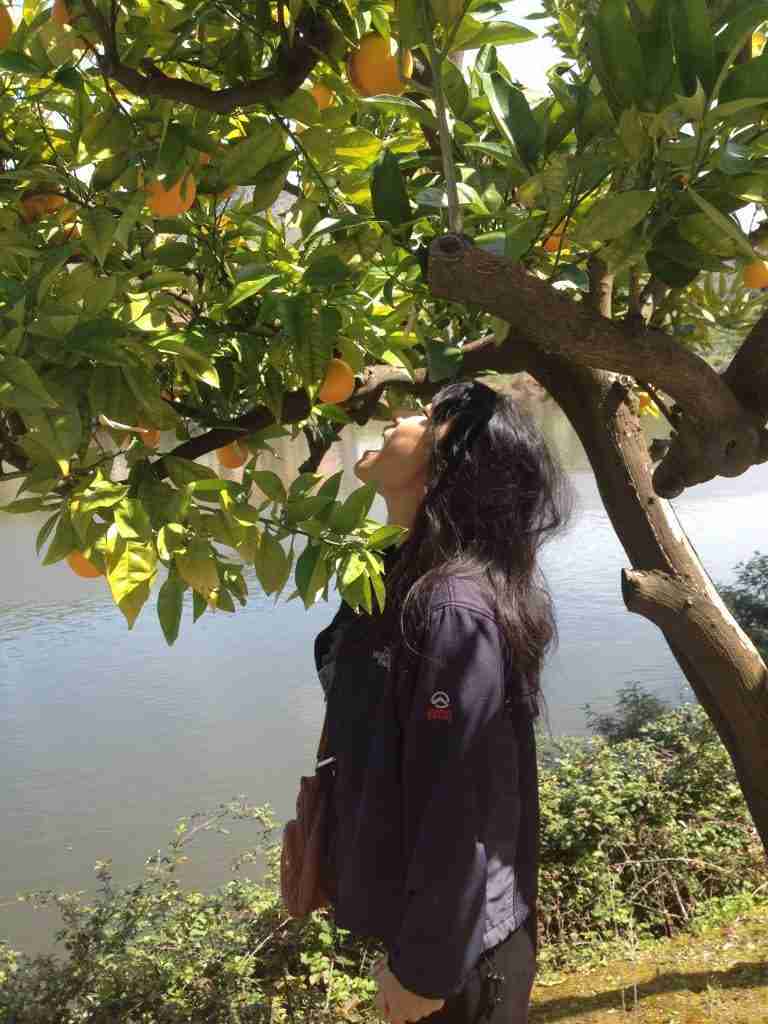 We followed up our feast with a cruise down the Douro river, surrounded by mountains and vineyards. Our captain even told us if we had 6 hours to spare, we could take a cruise all the way back to Porto. 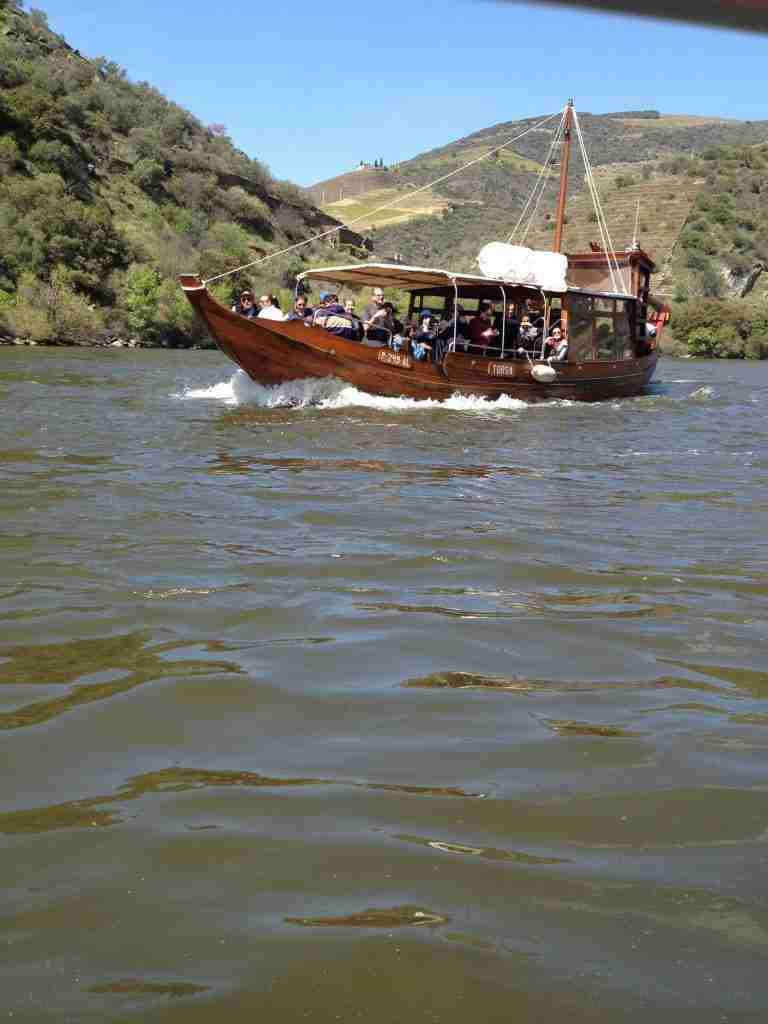 After the cruise, we walked around the postage-stamp-sized town, which though lacking in historical buildings and devoid of Porto’s grandeur, more than made up for it with its characteristic cobbled streets and paved paths that gave you a glorious view of the vineyards and mountains. 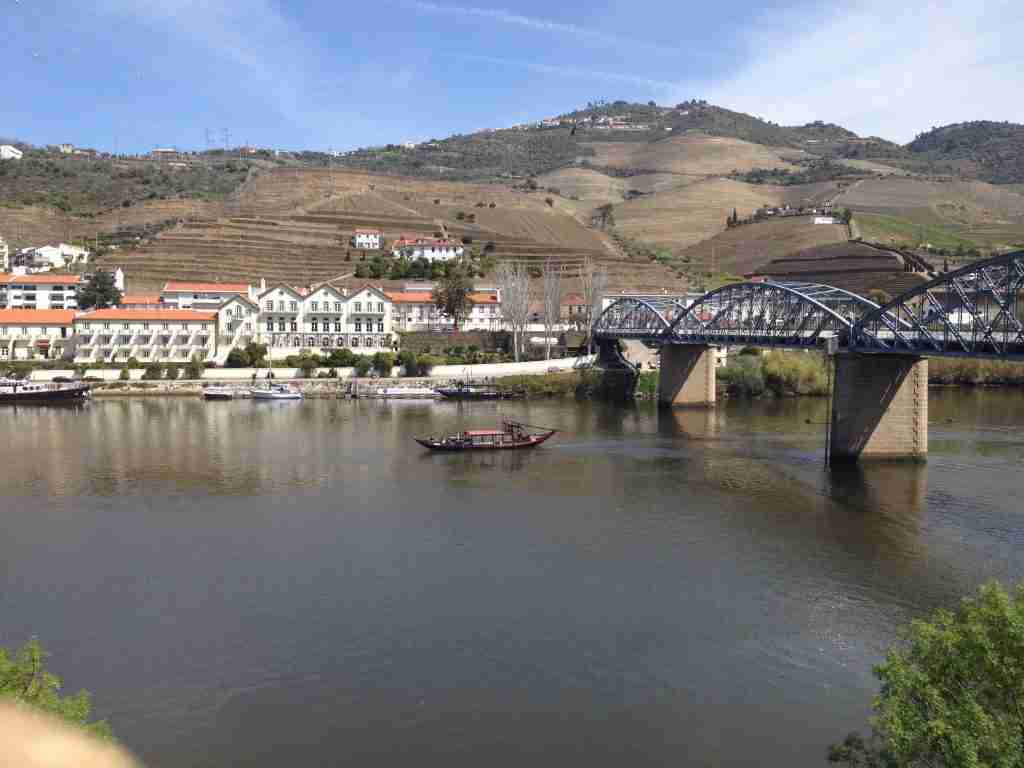 While we were admiring the scenery, a group of elderly ladies came up to us.

“Are you dentists?” One of them asked.

We looked at each other in confusion until it dawned on us that she was staring at our MadFIentist shirts.

“Oh, this,” I said, laughing. “No, it doesn’t say MadDentist, it says MadFIentist.”

“See, it’s a play on the word “MadScientist” except our friend is a ‘FIentist’, which means he does experiments in Financial Independence…” I explained, to a sea of bored faces.

“Oh how lovely,” The white haired lady in a big pink floppy hat replied, suppressing a yawn. “Enjoy your visit, dearies!” And off she went with her friends, presumably to talk about something that wasn’t finance.

We spent the rest of the afternoon leisurely strolling along the river, watching the sun rays sparkle on the water and enjoying the serenity of nature. 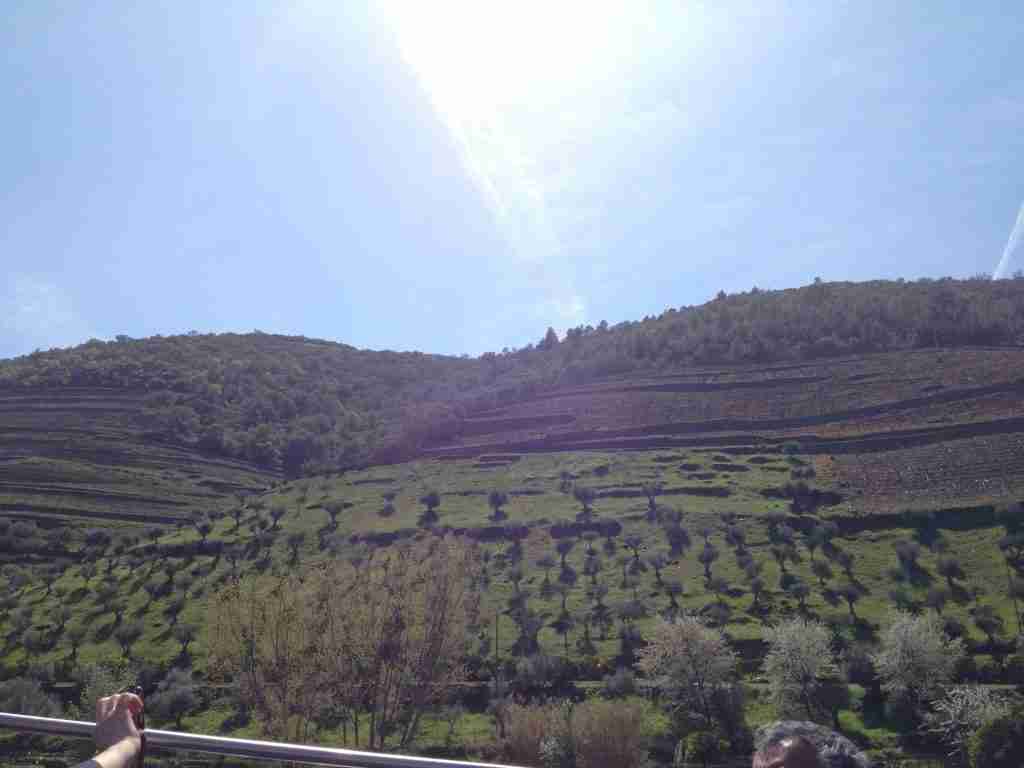 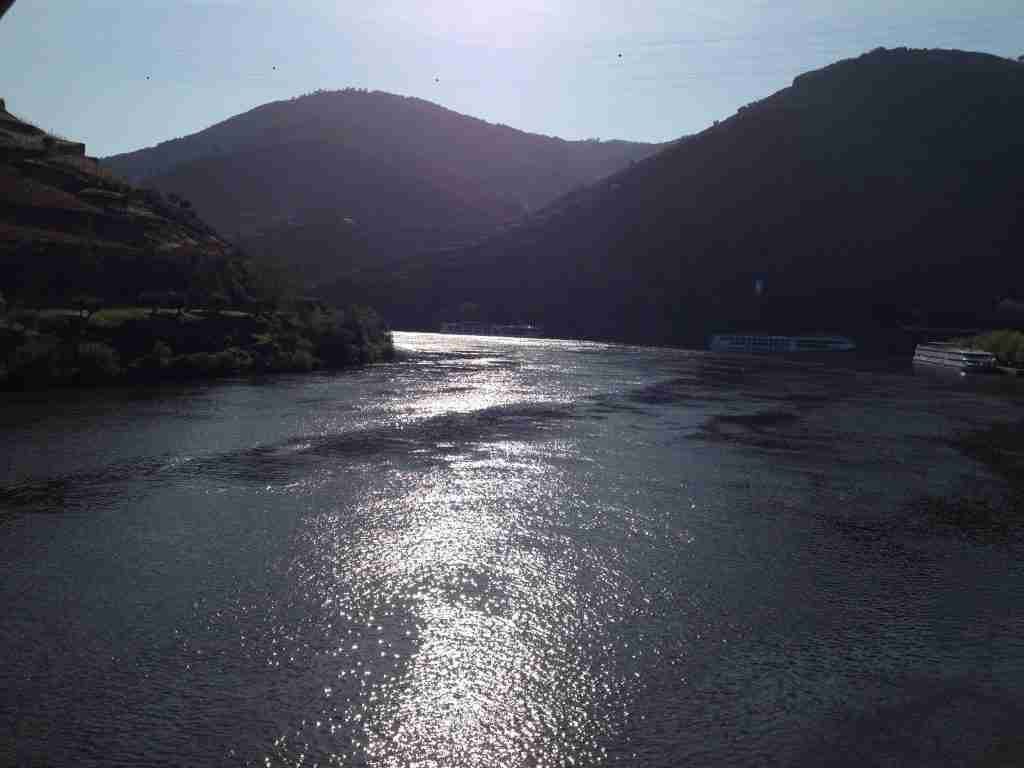 Despite not being interested in wine, I found Pinhão a pleasant day trip and a good change of pace from the city.

Even though we were just there for a day, you could easily stay in a hotel (or this incredible Airbnb if you can find 8 other people to share it with you) for a few days, and do some hikes through the region.

If you’re adventurous, you can drive the N222 from Regua, which has been voted the “best road in the world”, apparently for its ratio of 11.3 seconds of straight line driving for every second driving around bends (whatever that means):

If you’re wine drinker, I suspect you’d be a big fan of the wineries and tastings.

If you’re one of those people brave enough to try the lamprey, let me know how it tastes.

Since we only went to Pinhão as a day trip, these are the only costs we had for the day:

Transportation: 40 Euros (20 Euros per person, around trip train tickets. PROTIP: if you book advance online you can save an extra 10-15%. )

Total: 90 Euros/couple/day (you’ll likely spend more than this if you go on the wine tours and stay in a hotel)

What do you think? Are you a big wine drinker? Have you been to the Douro Valley?