“Why would I ever buy a house? I pay 380 Euros a month for rent in central Riga and my landlord is basically my slave.”

I liked our tour guide, Kaspar, right away.

We were on a Riga Free Walking Tour (they don’t have Sandemann’s walking tours in Riga) and a traveller had asked about the cost of housing in Latvia.

Then in response to another person asking him about why the cost of living is so low, he launched into a segment called “the miserable and depressing lives of the Latvian people”.

Having been on many walking tours, one of the things that struck me about these tours is that the sense of humour of the guide really makes or breaks the tour. Even though we enjoyed the tour from our Lithuanian guide, there was something about Kaspar that made the tour much more than just sprouting interesting facts about the city. He had this dry sardonic wit that painted everything with dark humour and gave the experience an extra oomph.

Like his description of this statue in the main square, for example:

He called it the “statue we use to make fun of stupid tourists”.

So, it’s actually a statue inspired by the Germain fairy tale about a group of animals—a rooster, a cat, a dog, and a donkey—from the city of Bremen, who became musicians after running away from their masters.

But Kaspar likes to tell tourists they are lucky statues that grant you wishes depending on which animal you touch.

“Donkey”, he said, touching the nose of the lowest animal on the totem pole. “only 25% chance your wish will come true.”

He wasn’t lying. We could see parts of the statue was shiny from being worn down by the hands of tourists.

“We made that up. We just like to see the stupid tourists jumping up and down like idiots. It’s our favourite pastime.”

I couldn’t help it. I was falling for Kaspar more and more by the minute.

As Kaspar walked us around the city, a few things stood out to me about Riga. Namely:

1) The House of the Blackheads

This building with the strange name was the party headquarters for rich single Merchants in the 1400s. Not only does it have a unique layout, it was famous for all sorts of lavish parties and debauchery. 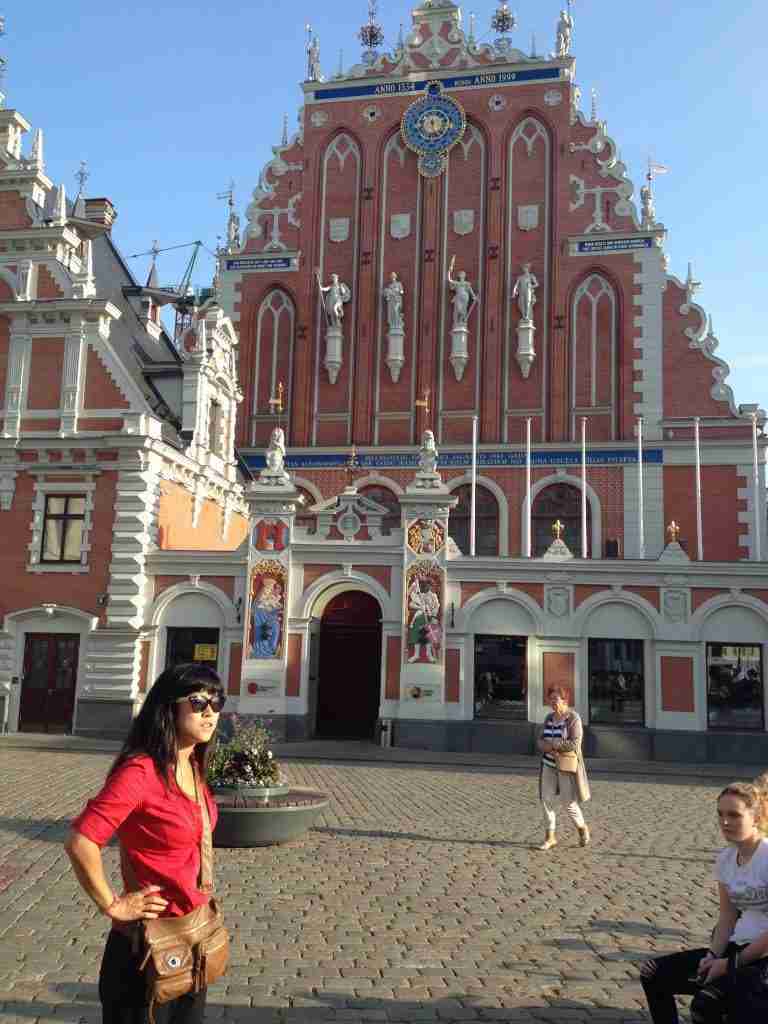 What do these 3 buildings have in common? Nothing. Other than the fact that they are right next to each other, despite each being 100 years older than the next.

If you want to feel like you live in the Great Gatsby movie, come to this street and marvel at all the art nouveau houses. The residents probably won’t be creeped out. Probably.

How could we possibly go to another Eastern European city and NOT learn about the atrocities of communism?

In the Museum of Occupation, we learned that over 35,000 Latvians were deported to Siberia during the first Soviet occupation and many died from the harsh conditions.

The one artifact that really got to us was this tiny bag of Latvian sand. One of the deportees had carried it with her—and refused to give it up even after a soldier threatened to shoot her. It was her last piece of human dignity and connection to her homeland and she was willing to risk her life for it. (we didn’t take a picture of it because pictures weren’t allowed)

Another jarring thing of note is the foot print commemorating the men and women who bravely stood for the fight for freedom when 3 million people held hands, spanning across Lithuania, Latvia, and Estonia. 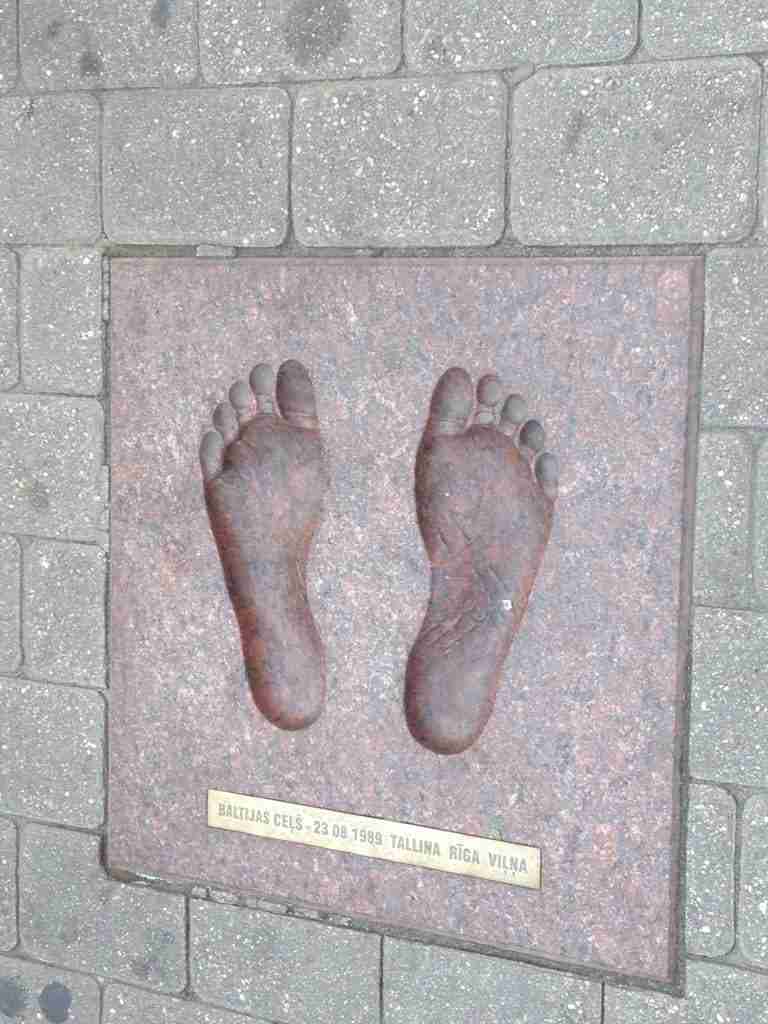 I’ve said it before, and I’ll say it again. Communists are jerks. F*ck communism.

“Jāņi” (aka “The Summer Solstice”)

Kaspar told us that one of the most popular celebrations in Latvia (even more than Christmas or New Year) is the Summer Solstice or “Jāņi”—the longest day of the year—when Latvians are encouraged to stay up all night, sing, drink, go to the countryside and be at one with nature.

You see, before Latvians were forcibly converted to Christianity, they were Pagans who worshiped nature.

So “Jāņi” is a tradition retained from the Pagan days and one of the fun things for teens to do is go into the forest to look for the magical fern that blooms at night. But since everyone knows that ferns don’t produce flowers, it really is a trip for a lot of “nudge nudge wink wink”.

When Kaspar explained this to a bunch of tourists, the Australians had no idea what he was talking about, so he said “Sex, okay! They went into the forest to have sex.”

After the mediocre food in Lithuanian, I’m happy to report we had a much better experience with the food in Latvia.

Now, that’s not to say everything was perfect. Our experience started off bad—with Black Balsam and a crappy touristy restaurant recommended by another guide who wasn’t Kaspar (does this mean we can only ever do tours with guides named Kaspar from now on?).

Black Balsam is an herbal bitter consisting of 45% alchohol that happens to be the flagship drink of Riga. The saying is “If you haven’t tried it, you haven’t been in Riga.” 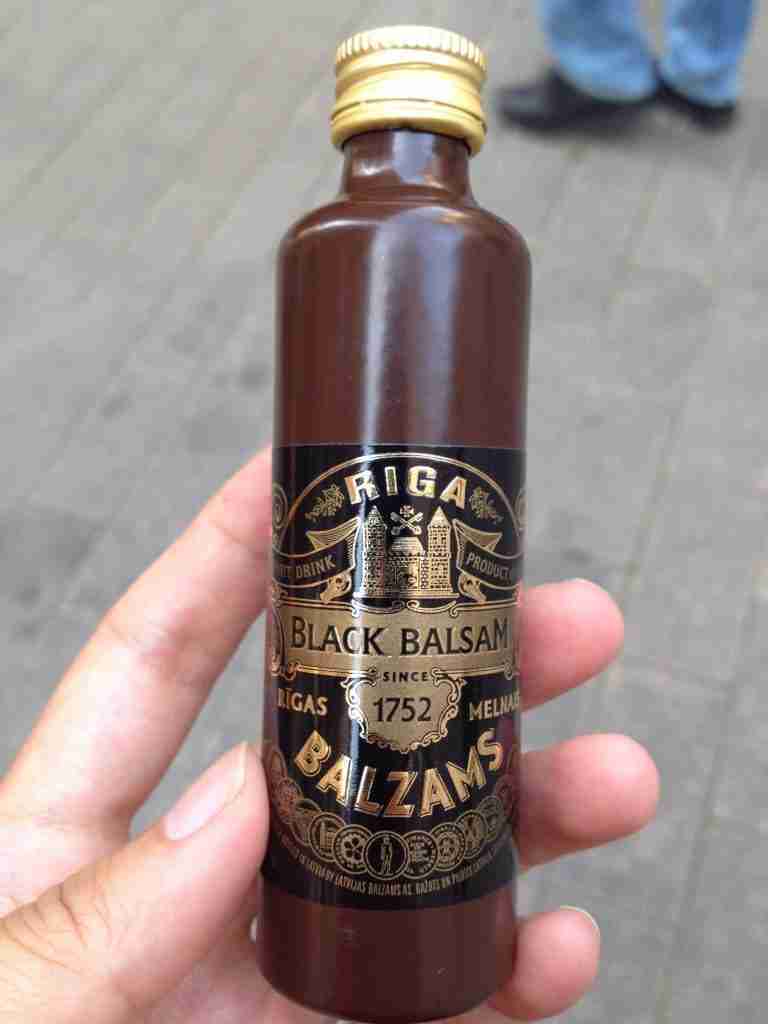 Well, I can definitely say that I have been in Riga, but my experience with the herbal bitter was…let’s say, exactly as it sounds.

“So, not a fan huh?” Wanderer said, watching the mouthful I spat out dribble down his shoe.

“What makes you say that?” I said, trying to suppress my gagging. The thing tasted like a someone drowned an entire mountain of black liquorice sticks in a sea of vodka.

I then made the mistake of trying to wash out the Black Balsam taste by going to (at the time, unbeknownst to me) a horrible, touristy restaurant.

We ordered some sort of fish soup, which tasted like a sour, fishy gazpacho. 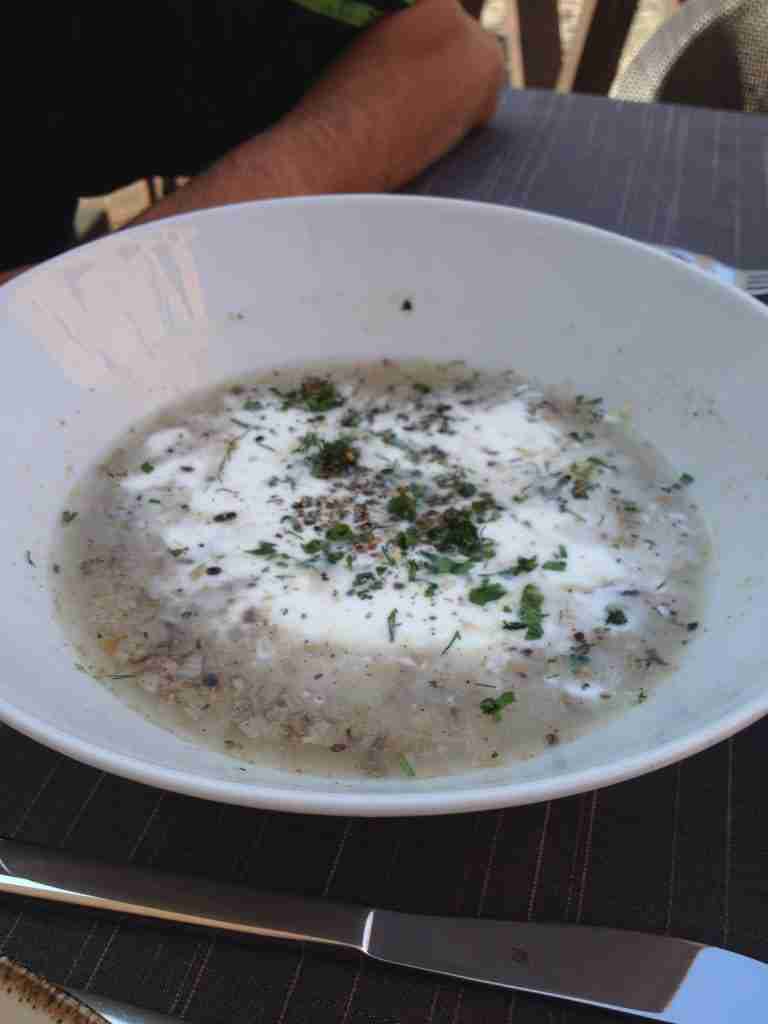 Then they followed it up with this blood sausage concoction–which, don’t let the plating fool you–tastes way worse than it looks. 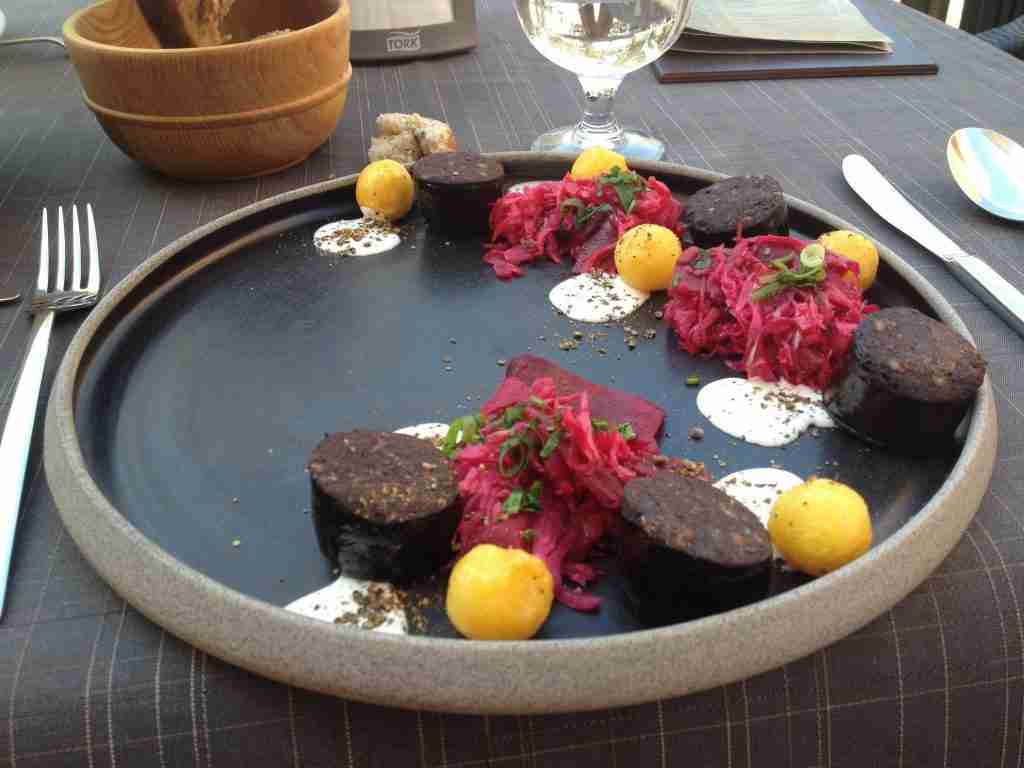 So how the hell did Riga redeem itself after this bad experience you ask? Didn’t I just say one of the memorable things here was the food?

Well, as it turns out, Kaspar, once again, saved the day. We decided to go to the restaurant he recommended, called “Kolonade”, in the park right next to the National Opera House.

Shockingly, we paid less to eat here than at the awful touristy restaurant. Usually the menu at this upscale place is on the expensive side for eastern Europe, but at lunch they offer quality dishes for only 4-6 Euros.

We ordered pork and vegetable soup, stewed beef with reddish, and duck meatballs with truffle oil and wild mushrooms. Everything tasted exquisite and looked too pretty to eat! The ambiance and decor were nice too, for those of you who are into that kind of thing (I’m the type of person who’d be just as happy eating a bowl of noodles on a stool by the side of the road as sitting in a Michelin-starred restaurant, so I didn’t notice) 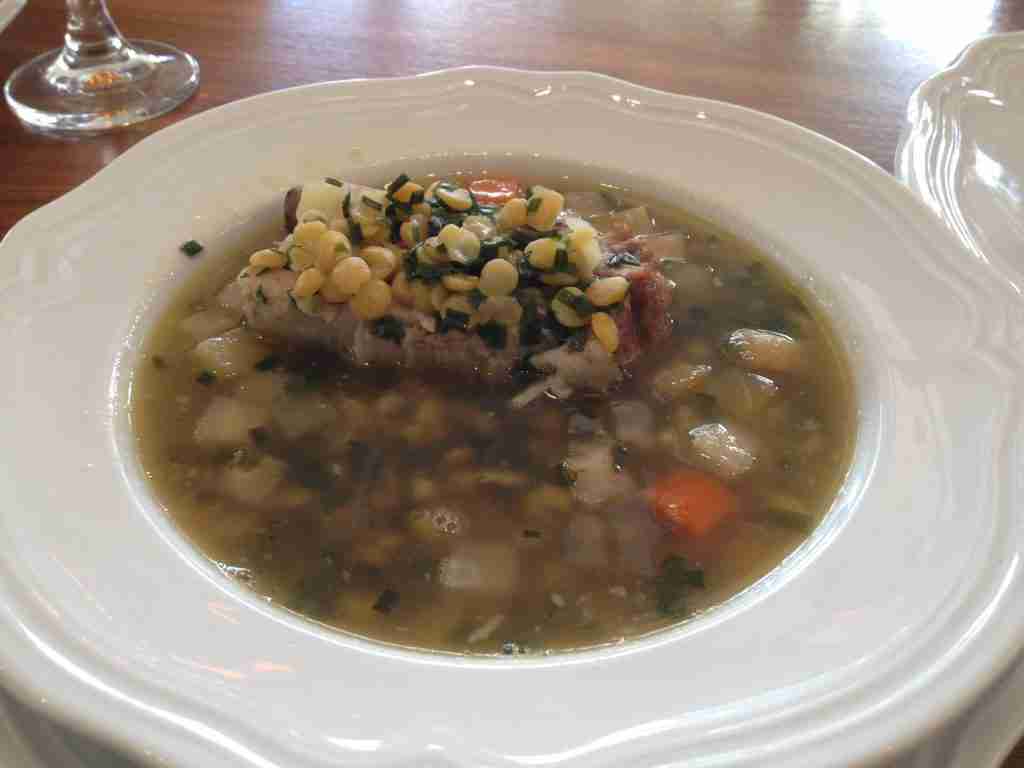 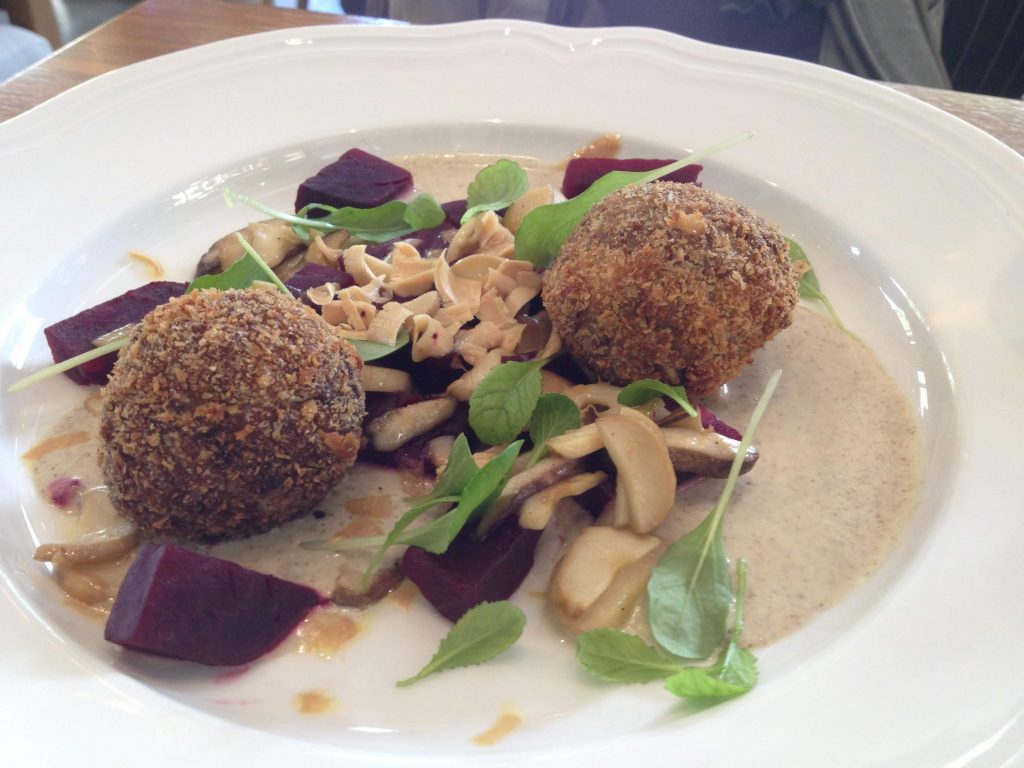 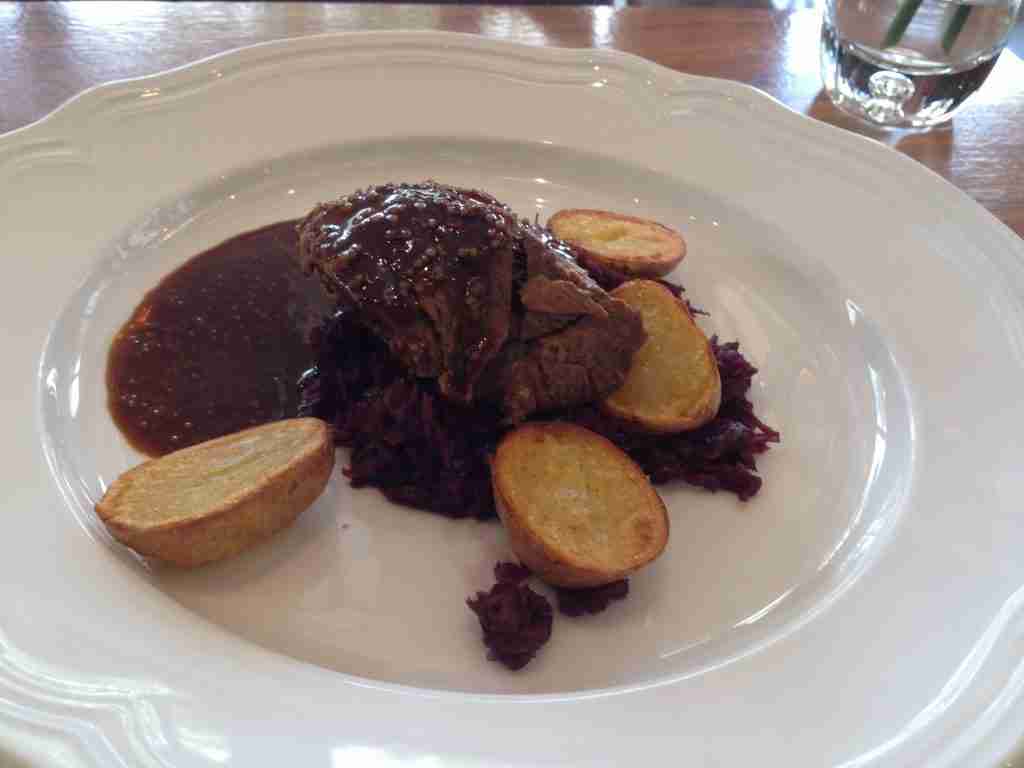 If you’re ever in Riga, look for the lunch deals, as this is probably the best chance for you to enjoy 5-star cuisine for a 1-star price in Europe.

For those of you who want to try more traditional Latvia food, you can also head for a local place called “Lido”, which is a cafeteria style restaurant where you grab your own food. 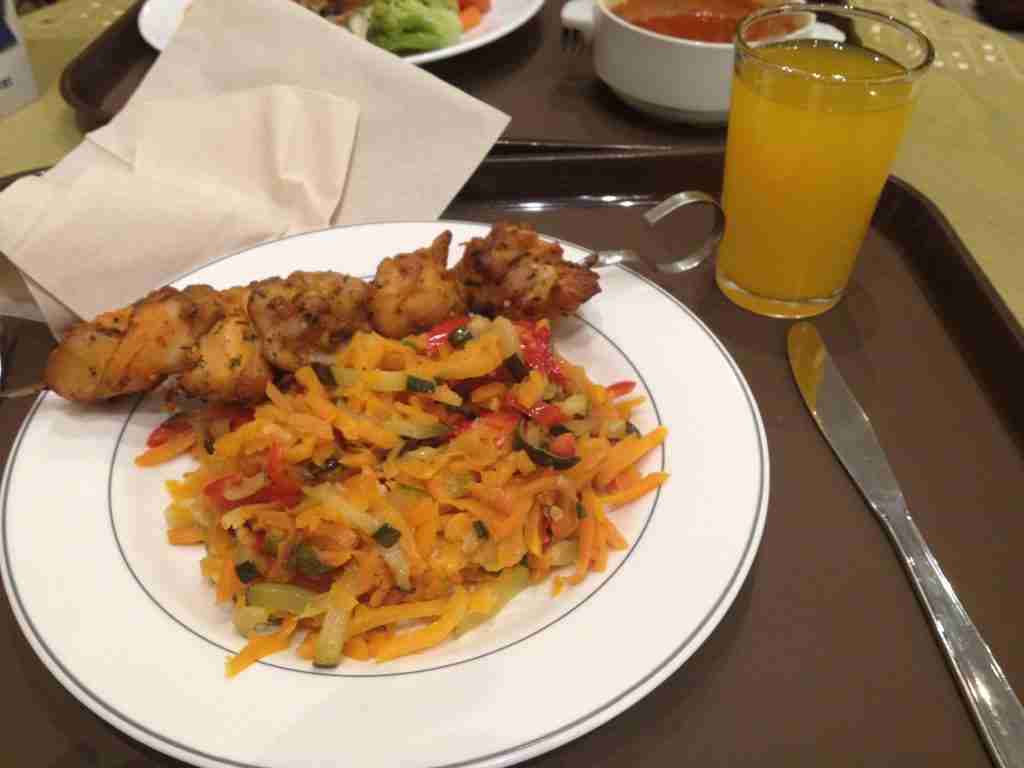 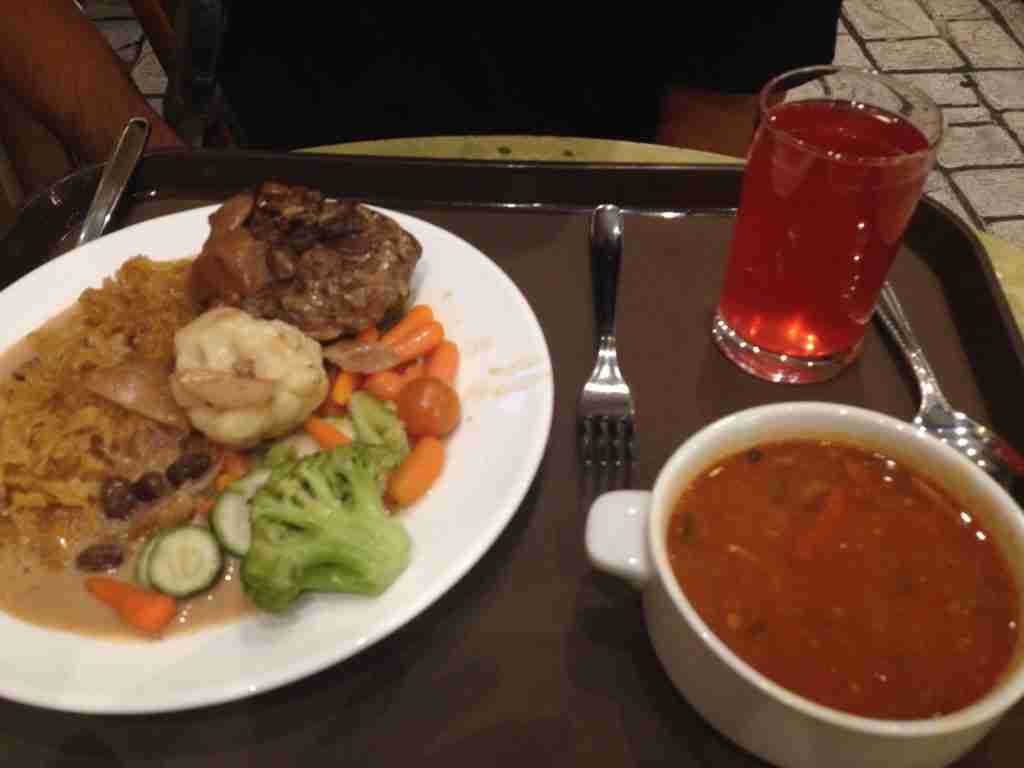 And finally, there’s also Latvia university (also near the Opera House)—also recommended by Kaspar—which serves meals in the basement cafeteria at prices so low, you’ll feel like you’re stealing.

But of all of them, our favourite was Kolonade. If I wasn’t afraid of never fitting into my pants again, I’d eat there every day.

In addition to Kolonade, other lunch special (from 12 noon to 4 pm) options include:

At Makonis Coctails, we got an appetizer and a main for only 6 euros, excluding drinks: 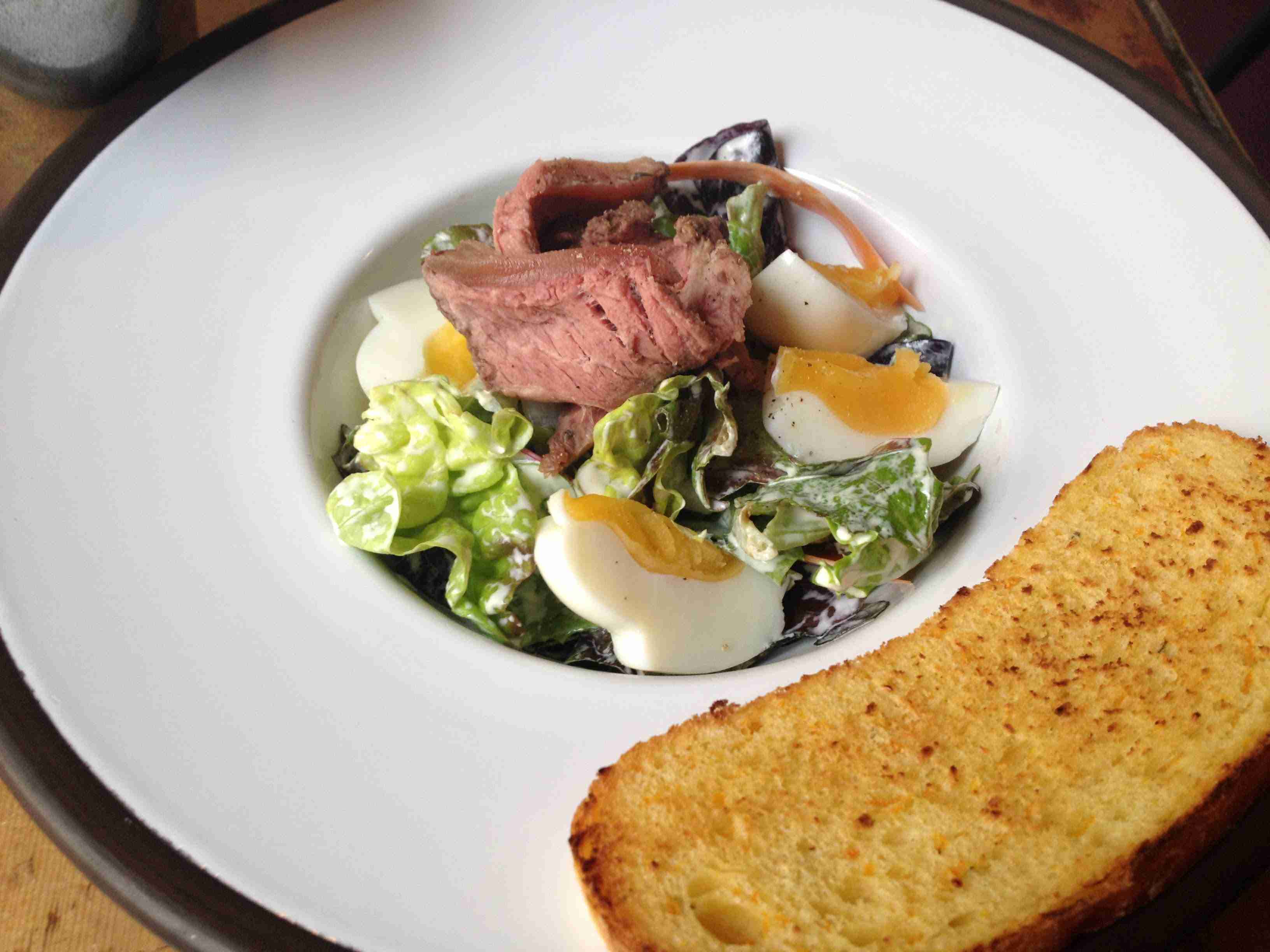 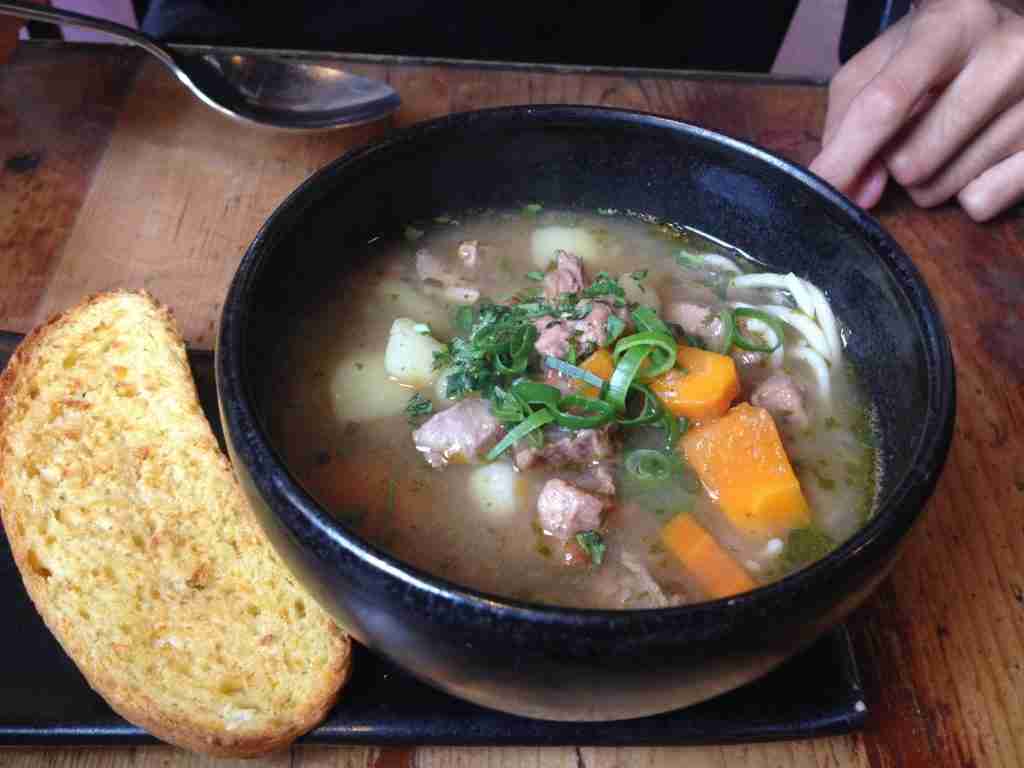 Overall, we felt that Riga was a great place to visit, with delicious food and interesting architecture—especially if you can get Kaspar as your tour guide.

We liked Latvia better than Lithuania, but were nowhere near as blown away as by Estonia, which we will talk about in our next post.

Here’s how much we spent in Riga:

What do you think of Riga? Would you try the food?