How to Withdraw From Your Portfolio In Retirement

This year, we did our first ever portfolio withdrawal.

It’s been a wild few years to say the least. In the first year of our retirement, the oil crash of 2015 happened which screwed our portfolio over and forced us to execute one of our backup plans: eating into our cash cushion. Then in 2016 things recovered as an Obama-led economic recovery took hold and ushered us all into an era of safe, stable prosperity.

Then Trump got elected.

Which briefly made the Dow plunge 500 points, but then inexplicably, start going up.

And up and up it’s gone. Against every expert opinion, against every prediction, the stock market has done nothing but advance since that fateful day that idiot got elected.

I really have conflicting feelings about this guy. On one hand, he’s clearly an idiot who doesn’t know what the Hell he’s doing.

On the other hand? I’ve made a lot of money under his presidency because of my investments in the US index. This year alone I’ve made over $100k. That’s…confusing.

But back to the withdrawal. Why did we need to do one? And why are we writing about it?

Well, to answer the first question, our cash cushion is running dry. We saved up 3 years of cash cushion before we retired to weather any storms that may have come after we pulled the trigger. And the first year, we wisely spent it weathering the oil crisis. But in the second year, we idiotically spent it on something called the “Investment Workshop” where we invested it, took screenshots of it, all in an ill-informed attempt to teach our readers how to invest. What idiots we were.

So this year, for the first time, we were staring at our dwindling cash balance and decided, “You know what? We should really do something about this.”

Show Me the Money!

When we retired, we shifted out portfolio towards higher-yielding fixed income assets. This created what we like to call the Yield Shield. This Yield Shield combined with our cash cushion theoretically protected us from temporary market dips screwing over our retirement. In reality, it totally worked.

The Yield Shield for our $1 million portfolio was 3.5%, equaling $35k. The intent of this, combined with our cash cushion, was to protect us against an unfortunately timed market downturn that would screw us over. That market crash happened, but because of that Yield Shield, we emerged unscathed. Instead, we invested as markets collapsed and ate into our cash cushion instead, with the idea that would buy us into time to make it to the next uptick.

So now, with another year behind us, we are sitting on an up year. Instead of losing money we made money, to the tune of over $100k. And through it all, that $35k Yield Shield amount kept getting generated.

It was time to make a withdrawal.

To Make a Withdrawal

Why am I writing this article? Because…

a) As it turns out, withdrawing cash from your portfolio isn’t nearly as straightforward as you think it is and…

b) Most FI bloggers just end up making too much money from their blogs and never have to do a portfolio withdrawal ever! So I figured it would be interesting for people to see how it’s REALLY done.

Great. So here we go. Here is what my actual, personal retirement portfolio looks like. 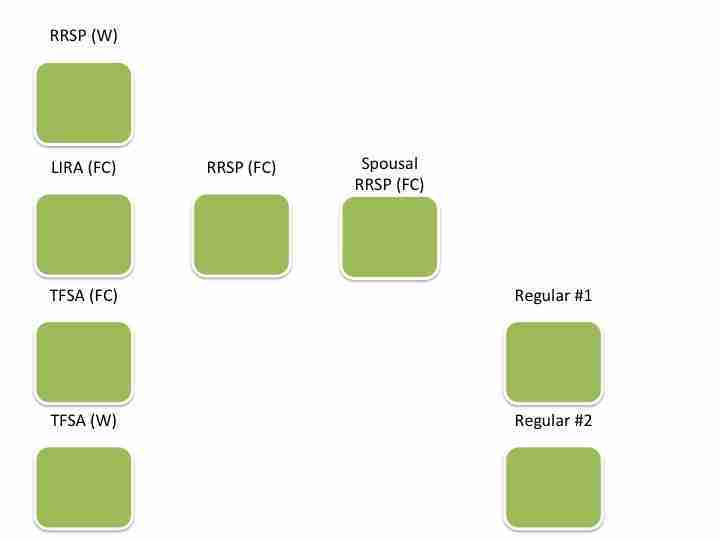 Yeah, that’s a lot of accounts, but let me walk you through them. First, at the top, we have Wanderer’s RRSP, which is our Canadian version of an American 401k. Then, in the next row, we have FIRECracker’s retirement accounts, which is a combination of a LIRA (Locked In Retirement Account, which FIRECracker has because of her old job’s pension plan), an RRSP (equivalent to a 401k), and a Spousal RRSP (which I created because it allowed me to contribute to her RRSP at my tax rate and withdraw at her tax rate). These are all very Canadian account types, and I’m sorry about that (ooh, an apology! Also very Canadian!), but hopefully you can map it to your country’s tax codes.

Anyhoo, next is both of our TFSA’s, which is similar to American Roth IRA’s, and finally our two Investment Accounts, labelled Regular #1 and Regular #2. There are two because one is denominated in Canadian dollars and the other denominated in USD.

So over the year, our Yield Shield has been hard at work generating income that we need to survive. We ended up generating $35k, and that’s great! I mean, the 4% rule suggests that we can withdraw more, but we’re projecting our year’s living expenses to be around $35k, so $35k is enough. 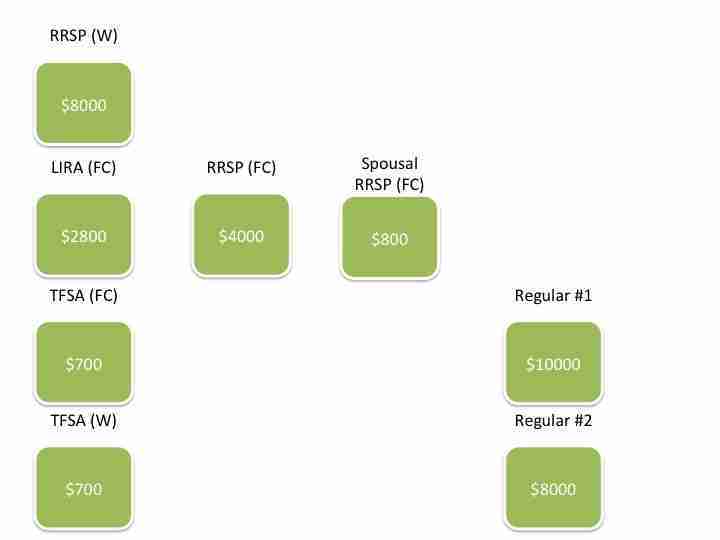 Yup. Our cash was scattered all over the place. And many of those accounts were retirement accounts which had restrictions preventing me from accessing that cash tax-free.

Well, joke’s on them because I got all that cash out tax-free after all. Here’s what I did.

Normally, you can’t transfer cash from one tax-deferred account to another. So despite the fact that FIRECracker had cash in her LIRA, there’s really no direct mechanism for getting that money out. Or is there? Hint: Yes there is.

By using the stock market itself as a transfer mechanism, we can get that cash out without incurring any taxable event! It’s super simple.

If you do this correctly, your buy/sell orders will match up on the stock market, and when your orders go through you will have essentially sold into the market in one account, then bought those units back in another account. You will have essentially used the market to transfer your cash, and because you’ve done it in your tax-advantaged accounts, there will be no tax consequences! 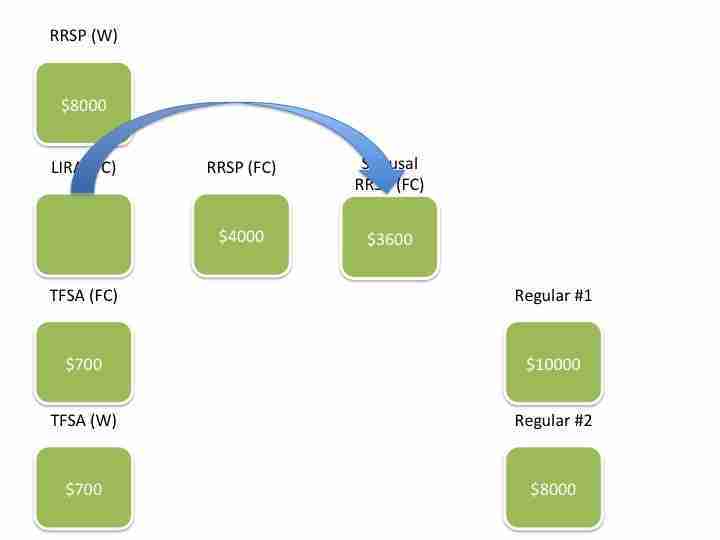 In my case, I used this technique to transfer cash from FIRECracker’s LIRA to her Spousal RRSP. I then repeated the process, picking an ETF I own in both her RRSP and her Spousal RRSP and doing a buy/sell swap on the open markets with the same unit price. 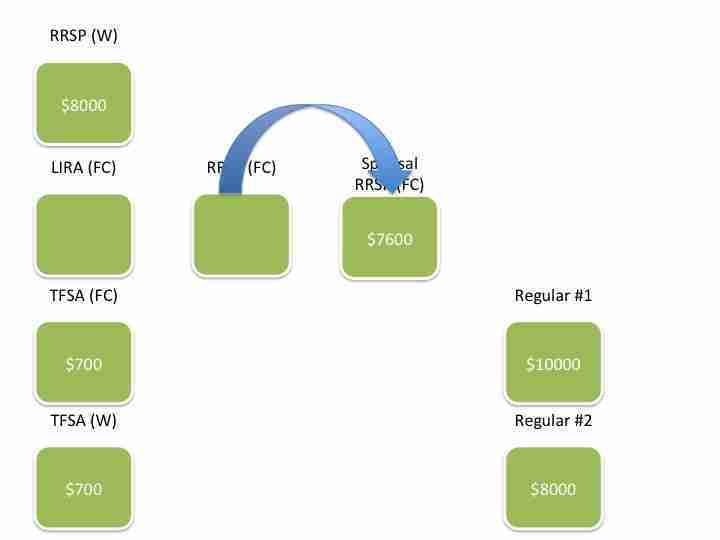 Now that we have all the cash we want where we want it, it’s time to do a withdrawal. For us Canadians, any amount we withdraw from an RRSP gets added to our taxable income, which is similar to what happens to Americans when they rollover money from a Traditional IRA into a Roth IRA.

So this amount that we withdraw becomes taxable income. Only thing is, when you’re early-retired like us your taxable income drops to zero, so any income like this you can shelter underneath your personal exemption (or standard deduction if you’re American). And given the tax changes that just passed Congress, this amounts to about $10k per person on both sides of the border! So that means assuming no other income, you can withdraw $10k per person from your tax-deferred accounts tax-free! For Canadians, this withdrawal can be done straight, while for Americans this has to be done as a 5-year Roth IRA conversion ladder. But the end result is the same.

For us, we noticed that our $10k tax-free RRSP withdrawal was more than the actual amount of cash we had available to withdraw. For example, in Wanderer’s RRSP, he only had $8000 cash free. But it we withdrew less than $10k, that room would have just been wasted. So we decided to withdraw some assets as well. CRA (and IRS) rules allow you to withdraw either cash or assets in-kind, meaning you don’t need to sell them before you withdraw. So we picked $2000 worth of assets that we wouldn’t mind being outside our tax-sheltered accounts (in this case, a Canadian Preferred Share ETF with the ticker symbol CPD). 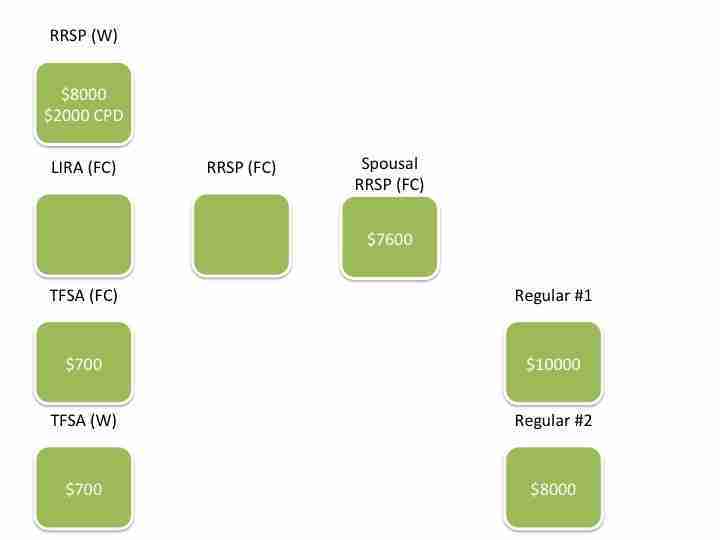 We then transferred that $8000 of cash and $2000 of CPD out. In Canada, when you transfer out $10k from your RRSP (whether it’s cash or ETFs), you get hit with a 20% withholding tax. Americans can elect to get out of this withholding tax, but we’re stuck with it. Fortunately, this tax is only temporary because while the tax gets imposed on withdrawal, if you have no other income you can report it on your tax return in April and get that money refunded back.

So that’s what happened. We did the transfer, part of that money got withheld, and we’re now expecting that money will get refunded to us the next time we file a tax return. 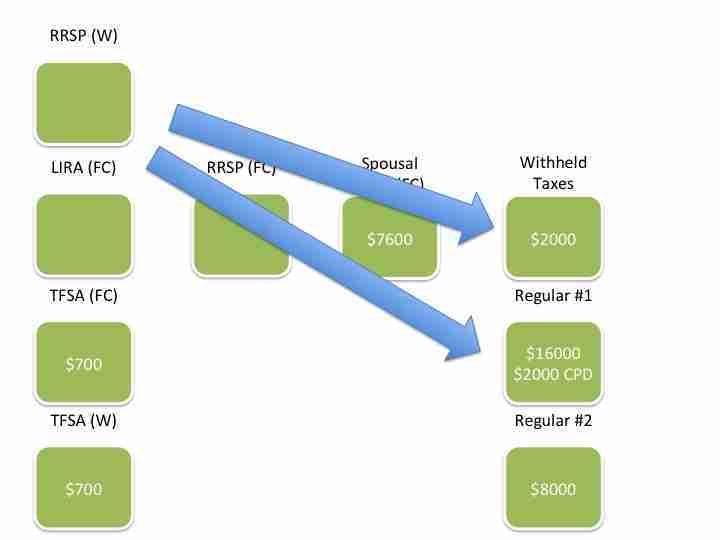 Next, we did the same with FIRECracker’s Spousal RRSP. After realizing that the amount we wanted to withdraw from the RRSP exceeded the amount of cash it contained, we nominated an amount of ETFs that we wouldn’t mind being in a non-tax-advantaged account. Coincidentally, we again chose CPD. 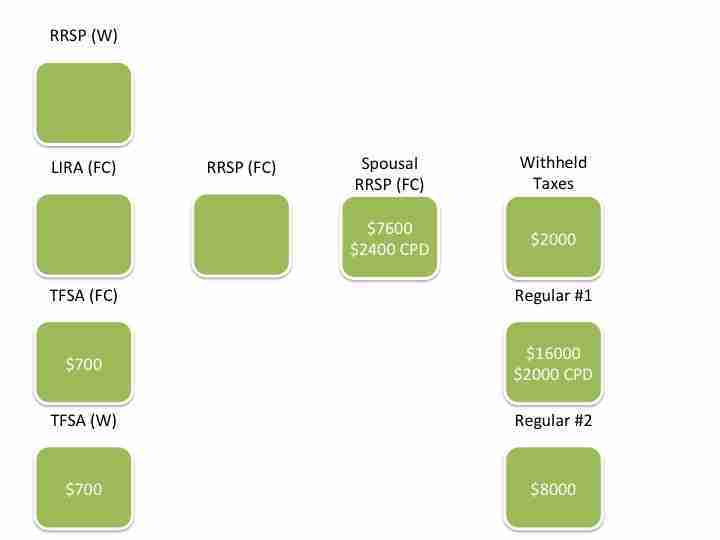 And $10k ready to go, we did our withdrawal. 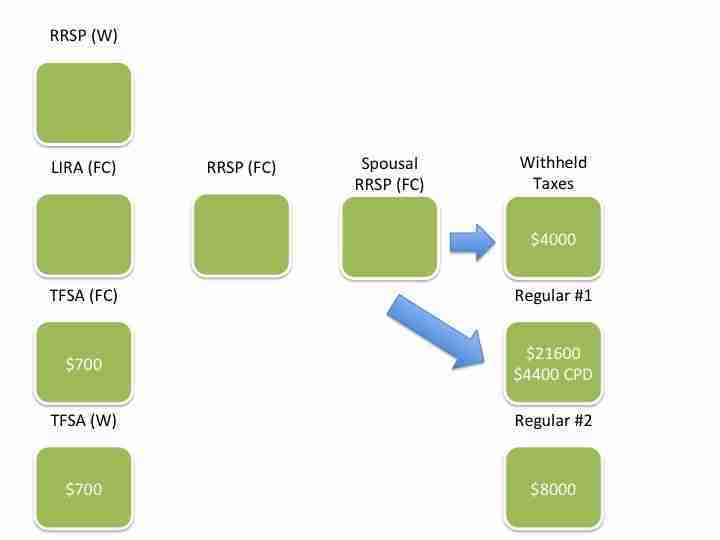 Last but not least, there was some cash (about $700) that had accumulated in each of our TFSA’s. Canadian TFSA’s are similar to Roth IRA’s in that they contain after-tax money that doesn’t get taxed on further investment gains. And those accounts work equally well for Buy/Sell swaps to move the cash into an account you can actually spend. That’s what we did, as shown here. 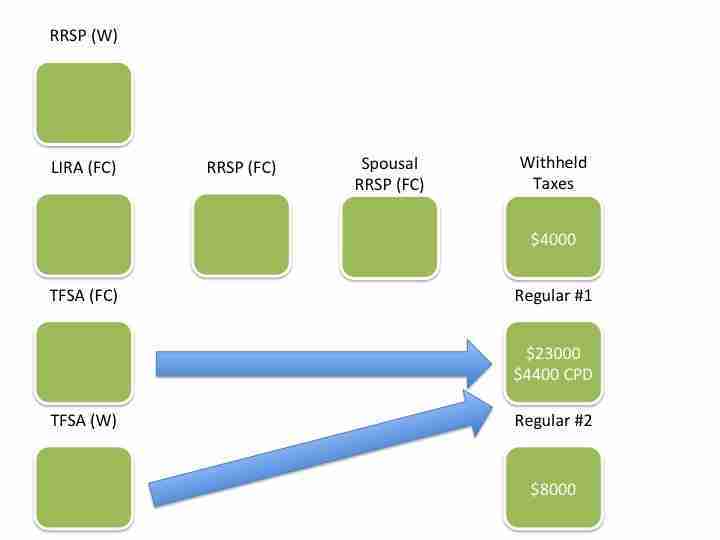 Finally , with all the money we needed to withdraw out of our tax-deferred accounts, it was time to make our final withdrawal. 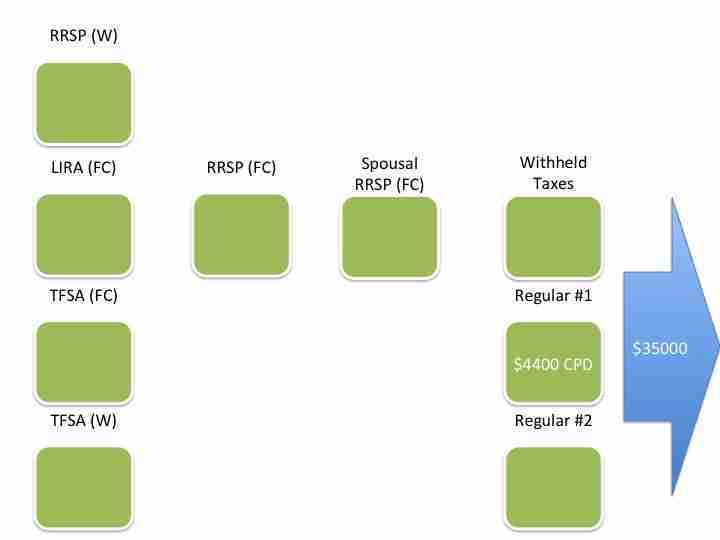 Let us hear it in the comments. Does this work for you?

111 thoughts on “How to Withdraw From Your Portfolio In Retirement”