How We Got Here, Part 4: The Bearded One

(update: as of 2018, Garth Turner, whom we mention below, is no longer our investment advisor. We now manage our own investments. To learned how to build a portfolio like ours, check out our FREE investment workshop)

Financial advisors are weird. One second they think you’re a two-year-old, the next second you’re the goddamn Queen of England.

The transition usually happens when they find out you have half a million dollars.

Then all of a sudden, instead of slowly explaining what “compound interest” and “money” are, they’re going on about Covered Call hedge funds that get you 15-20 % returns and calling you a genius even though you’re the same person you were five minutes ago.

In fact, he basically called us idiots…straight to our stupid idiotic faces. I knew instantly we’d be BFF’s.

I knew that Indexing worked, since it helped us survive 2008 without losing money. But if we weren’t sure that the same strategy for building our stash would work for early retirement, so we were trying to get help building a dividend-producing portfolio that would pay us 6%.

Turns out that yield-chasing in the Canadian market simply results in a portfolio loaded up with oil and bank stocks, opening yourself up to a potentially nasty surprise if oil prices crash. If oil prices crashed, energy companies would crash and cut their dividends, leading to a nasty double-shock as both the yield and share prices plummet. This advice would turn out to be prescient, as exactly this scenario happened in early 2016. If I had listened to those other guys, I’d be screwed right now.

“With a twist,” he explains. The core strategy is still Indexing using low-cost ETFs, which I was already a huge fan of, but with a twist of adding higher-yielding bonds than the Government of Canada ETF’s I was using. By carefully layering in Corporate bonds, Preferred Shares, and Real Return bonds (which we will write about in a future article), we find that we could goose our yield from 2% to close to 4% without taking on much additional volatility. Solid.

So on that snowy afternoon, the three of us crafted a plan to retire in our 30’s, and we haven’t regretted it since.

Around this time, Wanderer and I also start doubling down on our writing. After 2 failed novels and 75 rejections, we are FINALLY getting somewhere with our new novel about super-villains.

PROTIP: If you’ve ever wanted to write a book thinking it was an easy way to make a quick buck, BWAHAHAHAHAHAHAHA. *falls down gasping for air*

Write because you love writing, not because it pays well, because it doesn’t. But with our portfolio now growing and generating passive income, I finally plan for the day I get do what I love instead of having panic attacks every Monday morning.

And so we wrote, night after night.

And at work, the beatings continued, day after day.

MadDog patrols our cubicles hourly, barking at anyone who dares to eat lunch while NOT typing with their other hand. At least 50% of your appendages must be working at all times!

One of my co-workers can’t take it anymore and disappears on short-term disability leave. We’re annoyed, because at the time, none of us had any idea he was on anxiety meds and anti-depressants.

And since work is as much fun as sliding down a banister made of razor blades, I can’t help but daydream about going back to Europe. So we decide to take a breather and go to London for 2 weeks.

Even though it seems far away, the Plan to reach a 7-figure portfolio and retire early has been hatched. And with work going down the crapper, I turn into an obsessive-compulsive Budget Nazi, which is why everything is now broken down into more specific buckets. 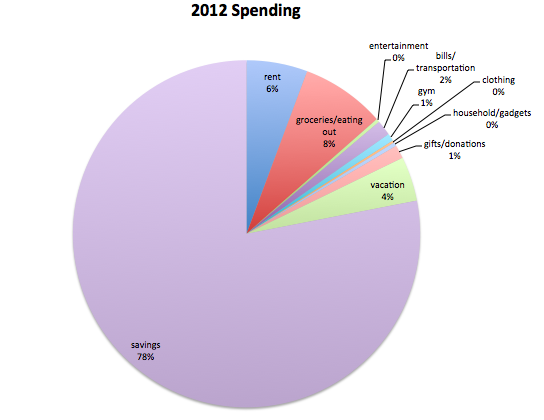 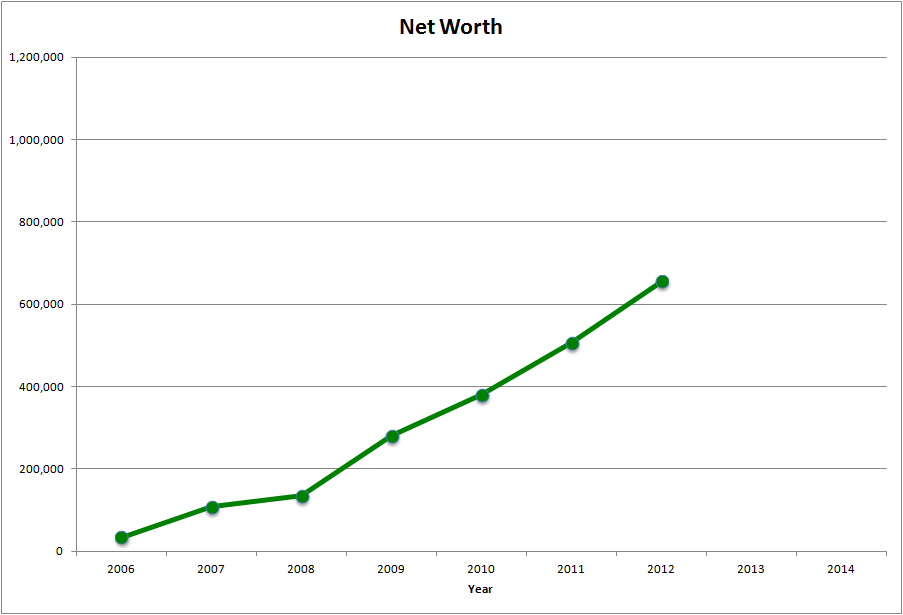 2013 is pretty hazy…because we spent half the year writing like crazy, and the other half drinking ourselves into a stupor.

We are now officially published authors.

When the dream you’ve had since you were eight years old finally comes true, all you want to do is laugh manically, cry, and laugh some more, before chugging an entire box of wine and passing out in a puddle of your own drool.

Work is still bad, but I don’t care. My dream came true and everything else can go fuck itself.

Now I’m REALLY motivated to budget. Because if our Plan actually works and we get to a million, I can do this FULL time for the rest of my life! And with that motivation, we take a hatchet to our spending. It’s not about sacrificing, but cutting waste. We never clipped coupons, but we changed where we shopped and what we bought. 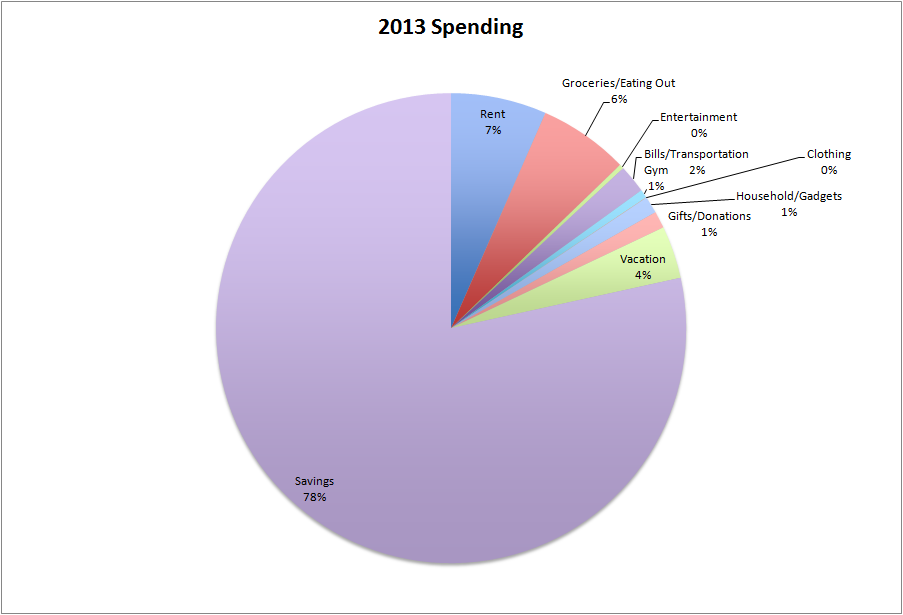 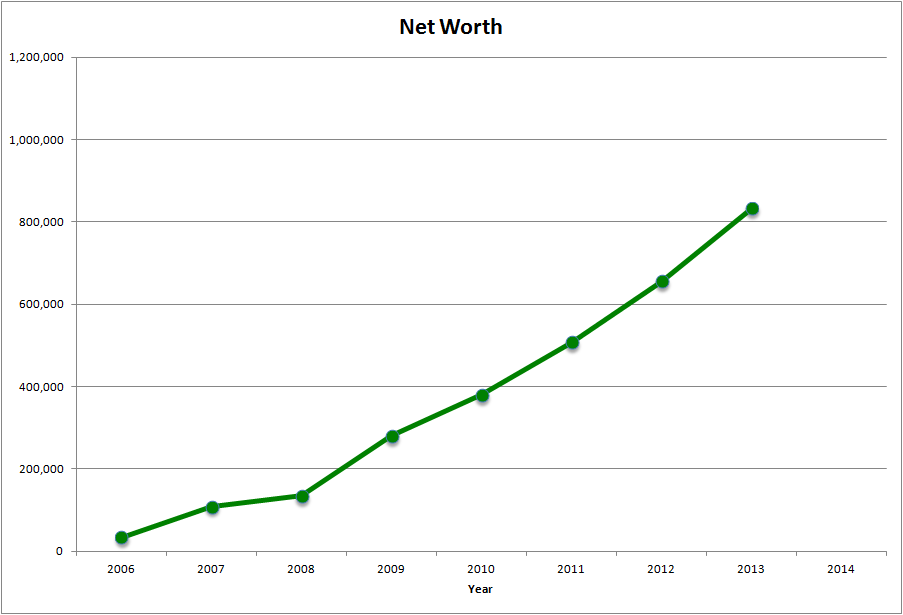 With our Net Worth cresting above $800 grand, we now have enough to buy that slanty semi with cash, but the allure of houses is so gone by now. Buy an overpriced prison and keep working hateful job for another 10 years, or retire in 1? Hmmm…tough call…

Work sucks. Everyone is busting their ass, and rumours of layoffs and re-orgs are flying all over the place.

My boss, Scott, goes on short-term disability leave.  There’s a blood clot in his leg and doctors say he has to be on blood-thinners or he might die. A month later, he comes back, acting like nothing’s happened. The blood clot is still there and he limps around with a cane, but he just works even longer hours and screams at us to do the same.

A few months later, my mentor, Andy, collapses at his desk and almost dies. His doctor says working 14-hour days is as bad as second hand smoke.

And then finally the axe falls.

But not on me.

On my best friend, Amanda, after losing half her family.

Taking her place is a foreign worker, working twice as hard for half the pay. As more and more foreign workers move in, hostility permeates the air like acrid smoke.

One day Lenny corners me in the cafeteria, fuming. “Do these fucking Indians think they can just take our jobs? We have families, kids, homes. Do they not give a shit about any of that?”

“Hey, don’t blame them. They have families too,” I point out.

“What? Why are you defending them?” He said, glaring at me. “Whose side on you on?”

“I’m not trying to take sides, but they’re miserable too. Do you know how many hours they work a day? And how little they get paid? One guy even missed the BIRTH of his own child for a meeting! How fucked up is that?”

“Great,” he throws up his hands. “So they get paid peanuts, we lose our jobs. Everybody loses!”

Lenny takes a deep breath. “So what can we do? My house is 900K, I’m in debt up to my eyeballs, and so is everyone else. We can’t risk losing our jobs. None of us can afford to stand up for ourselves.”

As I watch Lenny walk away, defeated, the feeling in my chest goes from a dull ache, to anger, to full-fledged rage.

It’s about breaking free from the corporate prison we’ve all been tricked into. Because of overpriced houses and expensive lifestyles, we’ve been conditioned to believe is this is the ONLY way to live. And corporations know this, so they saddle us with more debt, forcing us to work at our jobs until we die.

This reminds me of an episode of Mad Men I saw the other day, when this song started playing at the end credits.

what do you get?

Another day older and deeper in debt.

This was a song from the 1950’s about how much it sucked being a coal miner, yet somehow it feels just as relevant today as it did back then. How is it possible that 60 years later we can relate to a coal miner from 1950?!?

Because we’ve been tricked into thinking that saddling ourselves to massive debt, and being prisoners to our jobs is normal.

Since writing this blog, friends and co-workers have been asking me “Hey! I’ve been working just as long (or longer) than you, and I don’t even have $10,000 in my bank account? Where did my money go?”

That is an excellent question. Where did it all go? Because the only difference between us is that I just kept track of where my money went, and didn’t buy into the whole “buy now or be priced out forever” crap the real estate industry sprouted at us.

Sometime around November while I was still 31 I logged into our investment accounts and, after adding up the money we had saved that year, the total staring back at me was $1,000,000. We had done it. We were millionaires.

On New Year’s, we watched the fireworks from the waterfront, knowing that this would be the last year we would ever have to work. And when we got home that night, we both flipped open our laptops and penned our resignation letters. 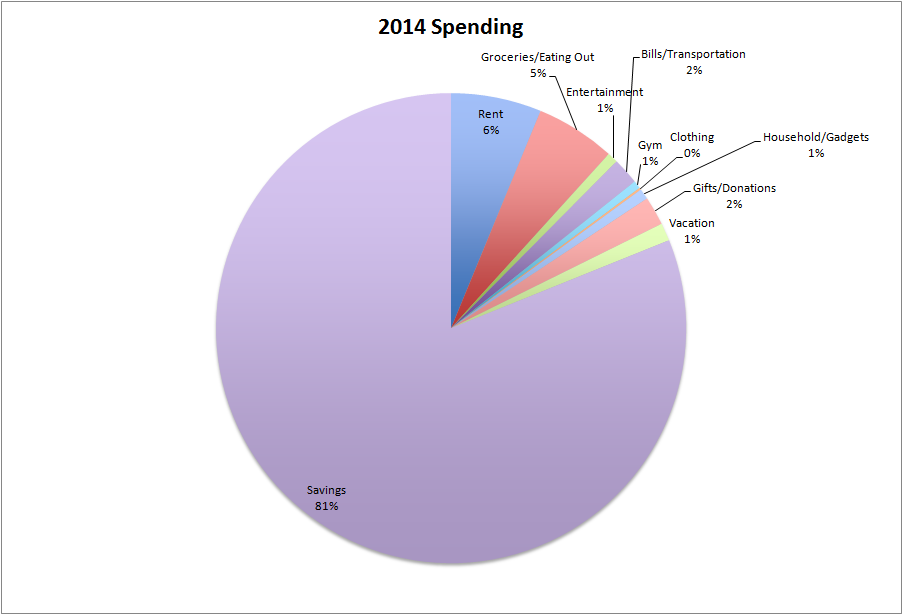 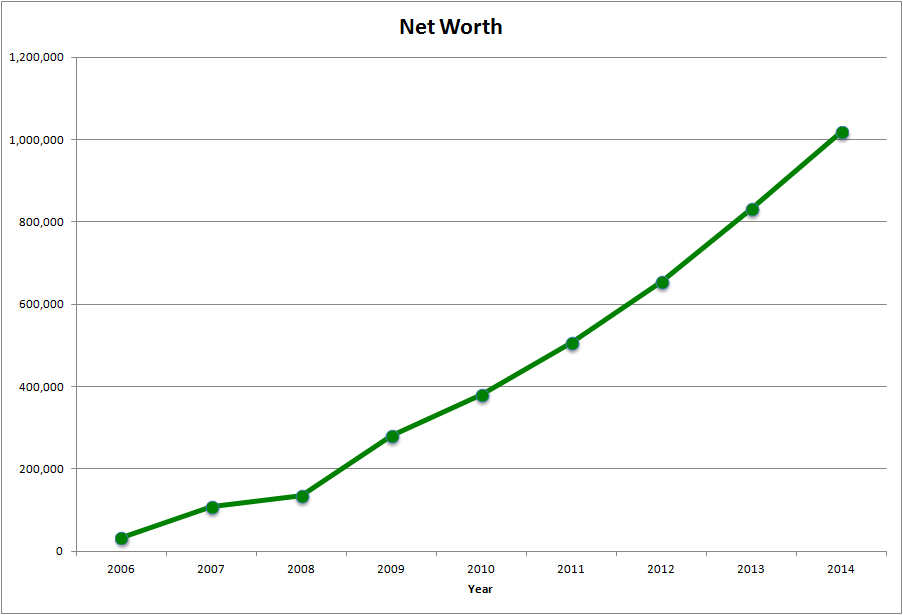 There is something special about reaching a goal you’ve been running towards for 9 years. You’re sweaty, dizzy, and exhausted, but it doesn’t matter. When you see the finish line in the distance, you get a second wind. You pump your legs harder and push yourself just a bit farther.

And then all of a sudden you’re done! You reached it.

Victory is FINALLY yours. And you regret nothing, because it was all worth it. You’ve made it and no one can take that away from you. What you suspected all along was true: Failure doesn’t faze you, and now you can do anything.

Hopefully, I’ve managed to convey the fact that we are not that special, we didn’t do anything magical to get here, and we didn’t sit in our basement clipping coupons and eating cans of beans like hobos. All we did was:

Got that? Becoming a millionaire is not about hitting a home run picking stocks. It’s about not shooting yourself in the foot. If you’re reading this thinking “Hey, that doesn’t sound so hard! Can I do it too?”

The answer is: Yup.