Before we talk about interest rates, I thought I’d give a fun little update on how our portfolios are doing. When I logged into my trading accounts to calculate our next round of buy orders, I realized that after adding up capital gains from rising stock markets and distributions from dividends and bond interest, we have now made about $100 in each account!

We made this workshop free because we believe knowledge of how to invest should be a human right and not just held exclusively by the rich.

But NOW, as it turns out, if you have been participating and copying our moves from the start, instead of COSTING you money like every other online course offered by your average financial blog, with our Workshop not only have you paid us $0, you would have actually MADE $100!

But if you haven’t been participating or you found us only recently, well no time like the present to get started! Studies have shown that for passive buy-and-hold investors like us, the single biggest determinant of success is time in the market, rather than timing the market. The (brief) history of this workshop is a testament to that. When we started our buys, Trump had just been elected and every investing instinct told me to hold off and wait for the inevitable stock market crash that literally EVERY pundit predicted. However, that would have been timing the market, so I ignored that instinct and started buying anyway. And because I did that, we made money.

And Now to Bonds

If you’ll recall, the two major components of a portfolio are equities (or stocks), and fixed income (or bonds). And bonds are, to put it simply, kinda sorta complicated. Not that stocks are simple, but everyone generally understands that when stocks go up, that’s “Good”, and when stocks go down, that’s “Bad”.

Bonds? Not so simple. It actually took me some time to finally wrap my head around bonds, and here’s what I learned.

Whenever central banks do something, it makes headline news. The Federal Reserve raised interest rates by a quarter point! The Bank of Canada dropped interest rates by half a point! Always in exclamation remarks, because it’s such a BIG FUCKING DEAL, but what does it actually mean?

And this is when the Bond Market, meaning the aggregate of every bond trader out there, takes one look at the interest rates that the Central Banks are offering and collectively go, “Nah, we’re going to decide what the interest rate REALLY is.” This is because bond traders can decide how much they’re willing to pay for a certain issue.

What you just did (as an imaginary bond trader) is you evaluated the quality of a certain bond (in this case, Greek debt) and assigned an effective yield on a debt instrument completely ignoring what the underlying issuer intended. This is what the Bond Market does.

This happens to all bonds. The bond issuer offers a certain interest rate, then bond traders decides what it’s REALLY worth, and that is, essentially, the Bond Market. 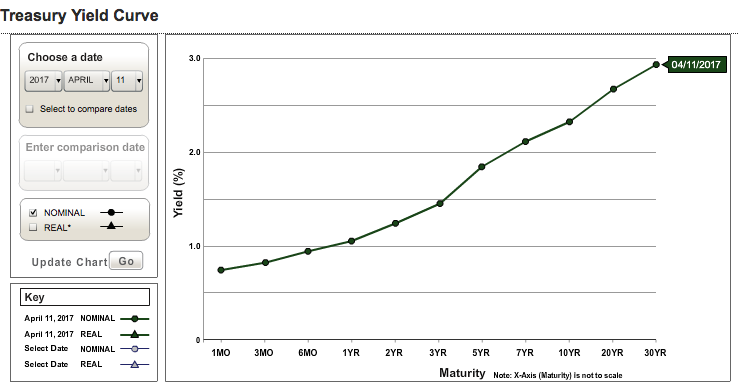 What you’re looking at is the current US Treasury Yield Curve. It shows what each Treasury maturity is currently yielding, meaning how much each issue is selling for in the Bond Market.

I have stared at so many charts like this, you would not believe. Bond Traders fucking LOVE charts. I wouldn’t be surprised if one of these guys show up on the news getting arrested trying to build a sex doll out of printed out Powerpoint presentations.

But because that curve reflects the opinion of every bond trader on the planet, once you learn to read those charts you can actually learn quite a bit. For example, based on the shape of that curve above, you can actually predict when a recession will occur. By taking yield curves from one asset and comparing them to other yield curves from other assets, you can actually predict things like inflation and the likely future direction of the stock market. And by taking yield curves of one country and comparing it to another, you can predict whether a country will likely collapse. It’s pretty cool stuff, and I may cover it in a future article if people are interested.

And in case you were wondering, the yield curve above suggests an economic expansion underway.

So how does this affect investors? If I own a bond, and I see a news story about interest rates falling, does that mean my interest rate drops?

For the most part, anyway.

There are some assets like Rate-Reset Preferred Shares that DO change up or down with prevailing interest rates, but for most plain-vanilla government bonds, your yield is locked in when you buy it. You bought that Greek $1M 5% bond at $200k, so you will be receiving $50k a year or 25% annually no matter what interest rates do from here on in (unless they default, of course).

…But Bond Values Do

And here’s where things get confusing. If I own a bond (or a bond ETF, as we advocate in these here Workshops) paying 5%, and interest rates change for whatever reason so that the same maturity is now yielding 4%, then how much is my bond worth? Turns out MORE. But why? Interest rates went down!

Here’s a rule I came up with to understand the madness.

Prevailing interest rates determine the yield for NEW MONEY coming into the market.

Which brings me to my second rule.

Bond prices go in opposite directions of interest rates for EXISTING bondholders.

Pretend you’re holding a $100k 30-year bond paying 5%. Now imagine interest rates move so that 30-year bonds now only pay 4%. Would you sell your $100k bond for $100k? Of course not! People with cash can no longer get 5% anymore! They can only get 4%. So you would only sell your bond for a higher price, such that the person with cash is only getting 4% on their money.

Basically, because interest rates went DOWN, your bond went UP in value.

So basically, this is how interest rates affect bonds.

And on that note, because we are on one of our regularly scheduled buy days, we shall now commence our next buy.

And finally we decide the actual unit numbers, making sure not to go into margin.

And for our American readers, we start similarly by getting a snapshot of our current holdings (including new cash)…

And finally we decide the actual unit numbers, making sure not to go into margin.