In our previous post, we broke down the math behind home ownership attempting to answer the question “In 2012, if we had bought a house instead of investing, would we have been ahead?”

The short answer is no. The longer, more detailed answer is HELL no. The results, which surprised even us, show that even in this weird time period of 2012-2015 when houses and a 60/40 portfolio appreciated at about the same rate (7-8% per year), the added, hidden costs of home ownership ate up most of the price appreciation. In the end, the return earned by investing thumped home ownership by a whopping 2.61X!

But in many ways, that scenario is unrealistic for the average person, as it compares taking $500k and shovelling it into a house or the stock market. Who the Heck has $500k saved up?

No, the average investor doesn’t have anywhere close to that, and must buy a house with a mortgage. It’s the only way to realistically get into the real estate market and participate in that sweet, sweet housing appreciation, and Real Estate agents are all too happy to let people do it. This is called Leverage, they say, and Leveraged Investing is your friend, because it allows you to participate in the gain on a $500k home investment while only putting in a fraction of that cash in yourself.

Leverage is your friend? Really?

Let’s Math This Shit Up

OK let’s say our intrepid investor, who we’ll called Homey the Homeowner, is looking at that same average Toronto house from the previous article. The one that he could buy for $497,130 in 2012 and whose value shot upwards to $622,120. Again, this is a $124,990 windfall in price gains, and represents a fat juicy 7.8% year-over-year gain. Mmmmmm, we definitely want to get us some of THAT action, right?

I plugged this information into a mortgage calculator at www.canadamortgage.com, and got this as a result.

You can play around with the calculator yourself to see how it all works, but basically, each bar is your monthly payment (in this case, $2,057). The blue/yellow parts of the bar is the part of the payment that went towards your principal, and the red is that part that went towards interest on your loan. And the numbers at the bottom are where your mortgage stands at the end of 3 years.

Great! $95 grand. Who wouldn’t be happy with that?

Remember this table from the last article?

That’s right. Of his $124,990 windfall from record-breaking home price appreciation, with a mortgage and taking advantage of “Leveraged Investing,” Homey gets to keep a whopping $6,162.54 of it.

The reason people don’t have money is NOT because they’re irresponsible with it.

Quite the opposite. We’ve talked to so many people, from Canada, the USA, and abroad. Time after time, email after email, we meet people who aren’t going out and buying fancy sports cars to drive to the casino. They’re hard working, honest people who are doing the best they can to provide for themselves and their family. They’re apparently doing everything right, yet they have no money. Why? Well, we think we have an answer. Over time, by doing more and more case analysis like the one we just did, what we’ve realized is this:

The reason people don’t have money is because it’s being stolen from them.

That’s right. I said it. Stolen.

Only these thieves don’t wear black bandanas and stick a gun in your ribs. These thieves wear $1000 suits, smile, offer you coffee, and tell you how smart you are while robbing you every time you sign a contract you don’t understand.

Homey here got gifted a $124,990 windfall by the twin forces of a rising housing market and cheap money. And yet he only got to keep less than 5% of it.

So who are the thieves here? Where did all his money go? Let’s break it down. 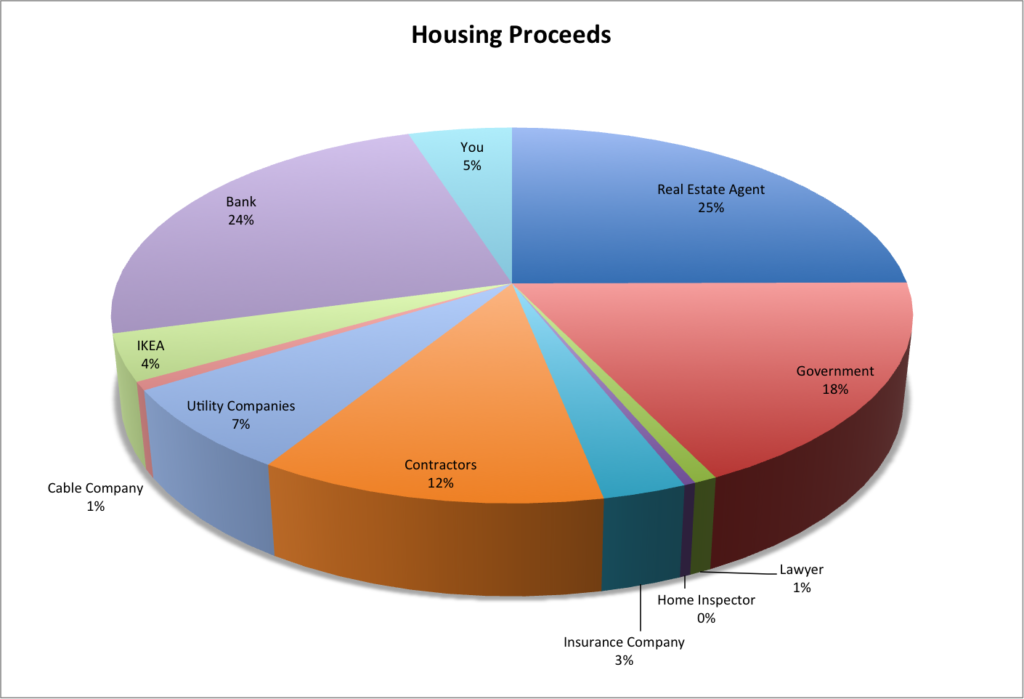 Oh, sorry, did you miss your piece? Here it is highlighted. 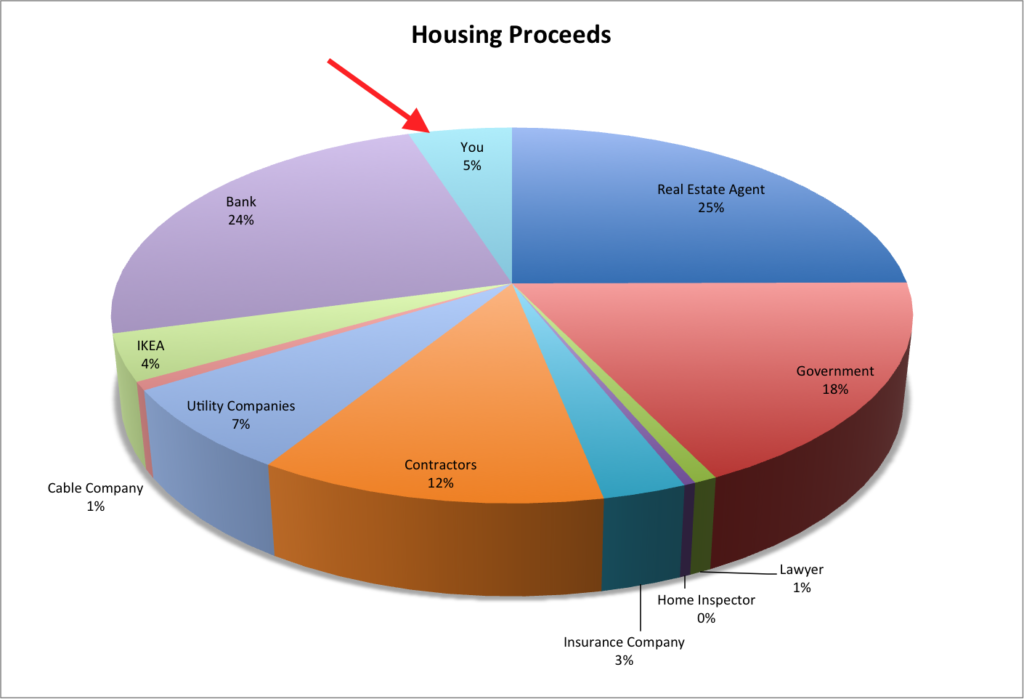 That’s you. The homeowner who took the risk, did the supposedly “right” thing, and rode a massive housing price wave to a six-figure windfall. You got 5%. Who got the rest?

And the list goes on and on and on.

And meanwhile, those same people will come out and congratulate you on what a smart investment choice you made, using leverage like a BOSS. Here’s how. They take your gains and divide it by the relatively small amount of equity you put down. So here, you equity was $25000 (your downpayment) + $43,744 (mortgage payment that went towards principle). That means on your $68,744 investment, you made $6162.54, meaning you made a return on investment of $6162.54/$68,744 = 9%!

Well, of COURSE they’ll tell you you’re smart. See how misleading that while you made $6162.54, they made $118,827.46! Of course they’re going to pat you on the back! They just stole all your fucking money! And they’re hoping you’ll do it again, because housing always goes up Up UP you know!

Now what if he had invested that amount in that 60/40 portfolio instead?

When we started doing this little investigation of ours, we were expecting that housing would suck, but not to this extent. Even we are floored by how bad these numbers look. Remember, this is a time period where both housing AND a 60/40 portfolio appreciated at about the same rate! An investor during this period would have made over $95k by putting their money into simple, low-cost, Index-hugging ETFs. A homeowner on a mortgage got robbed blind.

THIS is why most people will never accumulate wealth. Not because you are being irresponsible with your money, but because as a homeowner there are so many hands in your pockets bleeding you dry that you will never EVER get ahead. And everyone who robbed you can never be charged for any crime, because everything they did was 100% legal.

So no. No, leverage is not your friend.

Has anyone else been burned by this? Chime in in the comments.

107 thoughts on “Leverage. Friend or Enemy?”