The “Keep Your Rent” Movement: Are The Rent Strikers Freeloaders?

As the conoravirus cases mount around the globe, world governments have struggled to manage not only their health care systems, but also the ballooning economic cost. The US government recently passed an historic $2 Trillion stimulus bill, and the Canadian government passed their version as well. But some have responded that the measures in those rescue bills still aren’t enough, and have decided to take matters into their own hands. Allow me to introduce you to the “Keep Your Rent” movement.

What is the “Keep Your Rent” Movement

What was started by a local tenant’s advocacy group in an obscure Toronto neighborhood called Parkdale has quickly become (and I’m SUPER sorry I have to use this word right now) viral, with versions popping up all over the US and Canada, including Ottawa, Montreal, Vancouver, Los Angeles, Portland, and, of course, New York City.

They also point out that in many states and provinces, local governments have passed laws banning evictions for the duration of the pandemic. So, they argue, if landlords don’t have to pay their mortgage, and renters can’t be evicted, on April 1 when everyone’s rent is due, let’s all just Keep Our Rent.

Is this ethical? Beats me. Landlords will argue that renters signed an agreement when they moved in, and that the pandemic doesn’t change that. Keep Your Rent organizers will argue that tenants being left out of economic bailouts is in itself a form of class warfare.

Governments, surprisingly, have reacted somewhat sympathetically towards the renters. Here in Ontario, our Premier came out and told renters it was OK not to pay their rents.

~~Doug Ford Just Told Tenants in Ontario they don’t have to pay rent if they can’t afford it, BlogTO

Similarly, state governors in the US have affirmed their commitment to protecting renters from evictions. They’re busy fighting a virus, and the absolute last thing they need is sick people being evicted from their homes and then going around and infecting even more people.

The movement has picked up so much steam that posters and graffiti supporting it have just started randomly popping up all over the world.

Brooklyn is going on #RENTSTRIKE, pass it on 🏳️ pic.twitter.com/XHVl6tfwEi 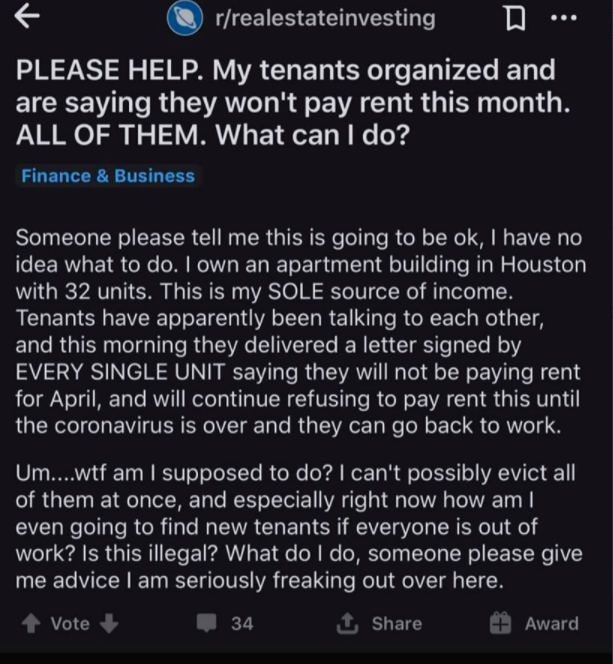 Scenes like this are playing out all around the world, and it has landlords panicked. And for good reason.

Over the years, I’ve met and gotten to know many real estate investors and what I’ve noticed is that they’re often far less financially secure than they think. Remember that even if landlords take advantage of these mortgage deferral programs, it’s not the same as having the payment forgiven. The amount that didn’t get paid will continue to compound, and when the landlord resumes their mortgage in 6 months or whatever, they’re going to find that their monthly payments will have gone up to account for this.

Also, there are plenty of other costs like heating, maintenance, property taxes, etc. that still need to get paid. And if the landlord is a full-time real estate investor that’s relying on those rent payments to fund their living expenses, then not getting their rent checks means they’ve essentially gotten laid off themselves.

Add all this together, and what this means is that landlords can’t afford to be sympathetic to their tenants plight. They need that money just as much as the renters do. And when they insist on getting their rent checks despite everything that’s happening, they are going to look like greedy assholes. 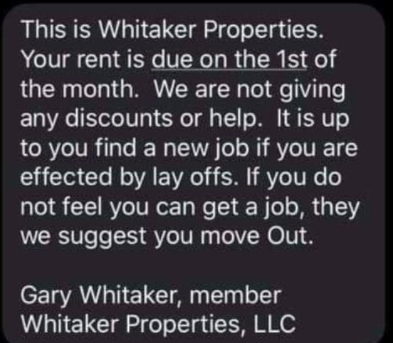 You can see their reactions yourself on popular real estate investing site BiggerPockets.com, where a thread has emerged of landlords giving each other advice on what to do about rent striking tenants. Highlights have included suggesting the tenants get a cash advance on their credit card, accusing tenants of being irresponsible freeloaders and thieves, and blaming tenants themselves for being poor.

So…maybe that whole class warfare thing isn’t too out of left field.

But at the heart of this debacle is the fact that the renters are angry. Very angry.

Especially in big, high cost cities, there’s an undercurrent of populism and righteous indignation that’s been unleashed by this movement. Greedy landlords, after all, have been blamed for years on sky high rents in many cities like New York, Los Angeles, and Toronto. “Now’s our chance to fuck the landlords,” people say. “They deserve it because they’ve been fucking us for years.”

It’s an emotionally satisfying response. This crisis has been unique in that it’s caused so much hardship without a clear enemy to hate. During the 9/11 attacks, everyone hated terrorists. During the 2008/2009 crisis, everyone hated Wall Street. But you can’t really hate a virus. Well, you can, but it’s not going to care.

So when a landlord comes demanding their rent checks when everyone’s lost their job, and then blames the tenant for being poor, that will provide a very convenient punching bag.

That’s why the Keep You Rent movement isn’t asking for a rent deferral. They just don’t want to pay it. That position would leave them vulnerable to being evicted once the bans are lifted, but they’re betting that if enough people do this on April 1, landlords won’t be able to retaliate because, as that freaked out landlady wrote on Reddit, “I can’t possibly evict all of them at once.”

United we stand, divided we fall, viva la revolucion and all that. Sound like anyone you know? 🙂

Who’s Side Are You On?

Personally, I can see both sides of this argument, and while I’m sympathetic to both, the truth is that the renters are probably going to win this one. The landlords are right in their assertion that even in a time of crisis, it’s still not OK to steal food from a grocery store, so why should not paying for housing be OK? But in the court of public opinion, those complaints will smack of privilege, greed, and pettiness. And if this movement manages to keep a united front, successfully pools their resources, and pressures local governments to support them via sheer numbers, landlords will find it less expensive to just eat the lost rent rather than engage in an doomed PR campaign.

Either way, April 1 is going to be an interesting day.

What do you think? Are you on the side of the renters or the landlords? Should people just Keep Their Rents or do you think that’s ethically wrong? Let’s hear it in the comments!

147 thoughts on “The “Keep Your Rent” Movement: Are The Rent Strikers Freeloaders?”